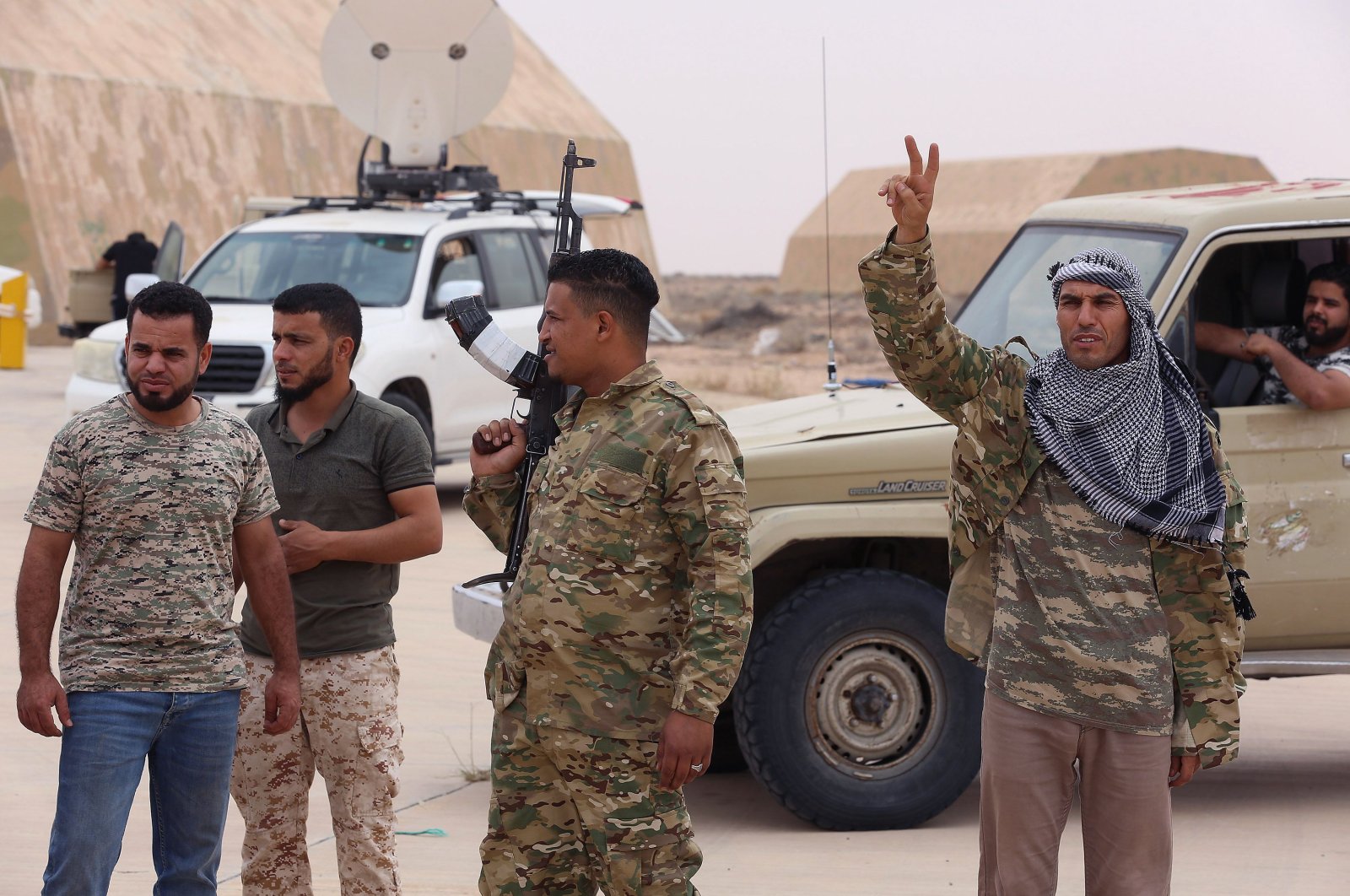 Fighters loyal to Libya's UN-recognised Government of National Accord (GNA) stand outside a hangar at Al-Watiya airbase, which they seized control of, southwest of the capital Tripoli, May 18, 2020. (AFP)
by Anadolu Agency May 20, 2020 1:54 pm
RECOMMENDED

"The army continues advancing towards al-Asaba to liberate it from the Haftar militia ... The clashes are very fierce," said Mustafa al-Majei, spokesman for the government's Operation Volcano of Rage.

Two army personnel were injured at the entrance to the town by drones sent by the United Arab Emirates, one of the countries supporting the putschist general's forces, he added.

The spokesman stressed that the retaking al-Asaba was essential in liberating the city of Tarhouna further south, as it would help cut off supply lines to Haftar's militias. Meanwhile, local tribes in al-Asaba announced their support to the Libyan government.

"Based on a meeting held by the tribes of the al-Asaba, the town has decided to join the Government of National Accord," the area's social council said on Facebook.

The city of Mezde in southern Tripoli also declared its support for the GNA on Wednesday.

The Libyan Army on Monday retook the al-Watiya air base from Haftar's militias. The base is a key facility now back under government control after some six years under putschist forces.

The move came after the Libyan Army destroyed three Russian-made Pantsir-type air defense systems used by Haftar's forces that were also supplied by the UAE.

Following the ouster of late dictator Muammar Gadhafi in 2011, Libya's government was founded in 2015 under a U.N.-led political deal.

"From what we are witnessing in terms of the massive influx of weaponry, equipment and mercenaries to the two sides, the only conclusion that we can draw is that this war will intensify, broaden and deepen with devastating consequences for the Libyan people," Williams told the Security Council.

She said Libyans were "getting lost in the mix," as foreign intervention in the North African country's conflict increases.

"We must not let Libya slip away," said Williams. "By coming together now, this council can ensure the collective security it is mandated to maintain by applying consistent and credible pressure on those regional and international actors that are fueling the conflict."

She said an "alarming military buildup" is taking place in the conflict-hit country because foreign backers continue to deploy weapons as well as recruiting more mercenaries to both sides.

"We can collectively write a different ending to this so far sad tale but only if we demonstrate a collective will to do so," she added.