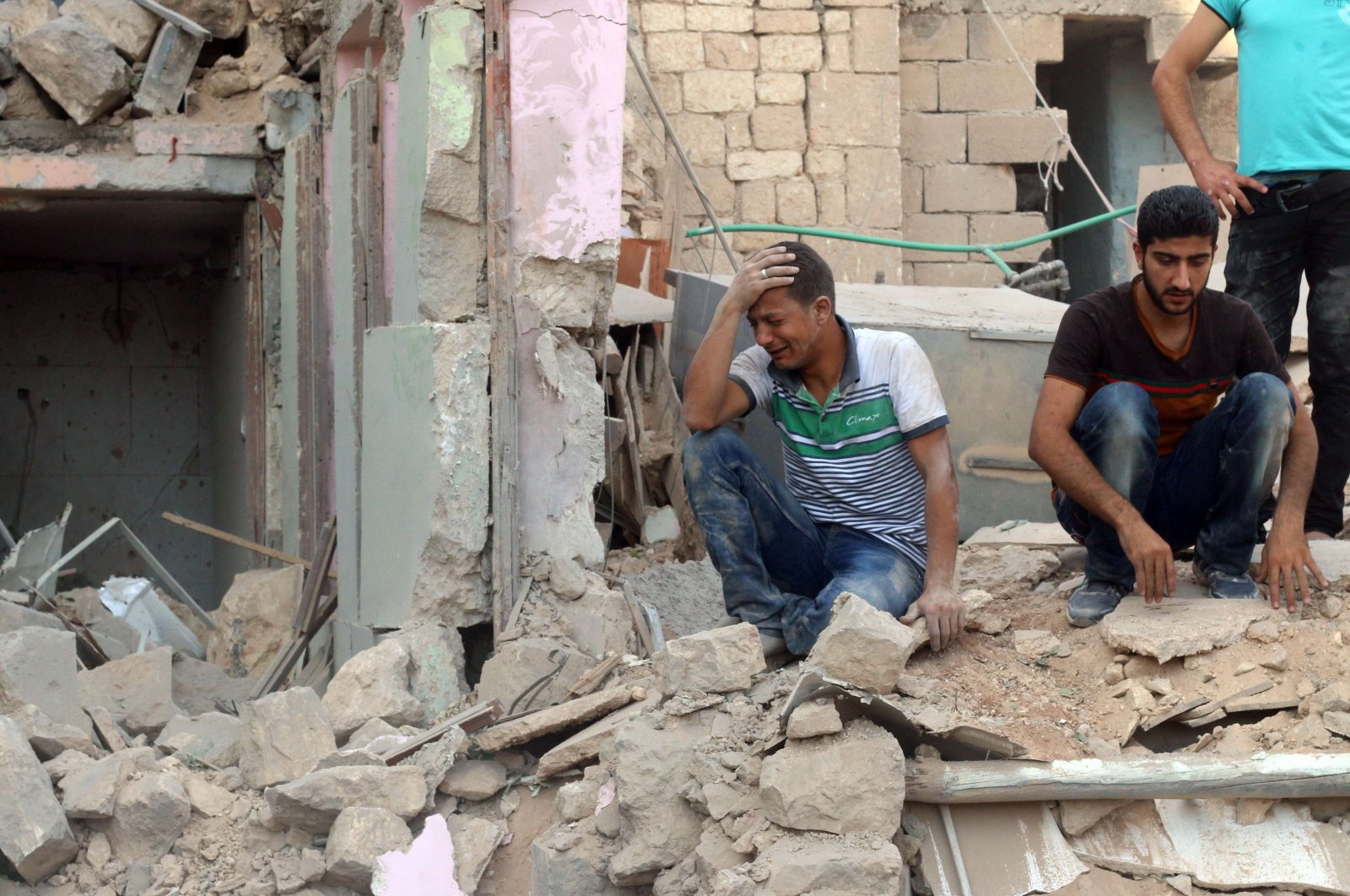 A Syrian man cries as he sits on the rubble of a house after an attack by Assad regime forces in the northern Syrian city of Aleppo on July 27, 2015. (AFP Photo)
by Daily Sabah with Agencies
Apr 01, 2020 3:38 pm

Just over 100 civilians were killed in March in the Syrian war, marking the lowest monthly noncombatant death toll since the start of the conflict in 2011, two war monitors have confirmed.

The Britain-based Syrian Observatory and the Syrian Network for Human Rights (SNHR) had slightly different civilian death counts but numbers were the lowest monthly total in the history of the war.

The Syrian Observatory recorded a total of 103 civilian deaths in March. Out of the total, some 51 people were killed in shelling and airstrikes by the Syrian regime, the Observatory said.

The bulk of the remaining casualties were caused either by explosive remnants or mysterious "assassinations," the Observatory added.

The civilian death toll was more than double that of March in February, when a regime offensive on Syria's last major opposition bastion was still in full swing.

According to the Observatory, the number of deaths that month stood at 275.

March's civilian fatalities included nine children, the Observatory added. Of the total deaths, 27 civilians were killed in airstrikes by Russia, the key backer of the Syrian regime forces, the Britain-based watchdog said.

Meanwhile, the Syrian Network for Human Rights (SNHR) said 5 children and 3 women were among the victims that included 36 who were killed by regime forces and allied militias, 14 tortured to death in regime prisons, 12 in areas occupied by the YPG/PKK terrorist group, 19 in Russian airstrikes and two by Syrian opposition forces. The SNHR said 76 were killed without identifying those responsible. The watchdog estimates 707 civilians have been killed in Syria since the beginning of the year.

The war in Syria has left more than 380,000 people dead since it started nine years ago.

The highest civilian death toll recorded in a month since the start of the conflict was 1,590 in July 2016, when battles between the opposition forces and the Bashar Assad regime raged in the northern province of Aleppo.

Damascus in early March paused a military offensive in Syria's northwest after a cease-fire brokered by Russia and Turkey came into effect.

On March 6, a cease-fire agreed by Ankara and Moscow went into effect in Syria's northwestern Idlib region, the country's last opposition stronghold.

Observatory head Rami Abdel-Rahman said the Turkish-Russian truce in Idlib was the main reason for the drop in civilian casualties.

"Definitely the ongoing cease-fire has attributed to the fall in the number of the dead," he told dpa.

The Moscow-backed campaign had displaced nearly 1 million people in the region since December, piling pressure on informal settlements already brimming with families forced to flee previous bouts of violence.

Turkey launched Operation Spring Shield on Feb. 27 after at least 34 Turkish soldiers were killed in a regime airstrike in Idlib province, and after repeated violations of previous cease-fires.

Under a 2018 deal with Russia, Turkish troops were to be placed in Idlib to protect civilians from attacks by the regime and terrorist groups.

Idlib is currently home to 4 million civilians, including hundreds of thousands displaced in recent years by regime forces throughout the war-torn country.

In recent months, nearly 1.7 million Syrians have moved near the Turkish border due to intense attacks by the Assad regime and its allies.

The fate of the displaced has been a key concern of aid groups amid an outbreak of the novel coronavirus, which has killed two and infected eight others in the country.

The United Nations has appealed for a nationwide cease-fire to tackle the novel coronavirus threat, while aid groups have warned of a health catastrophe if the pandemic hits overcrowded displacement camps or crammed regime prisons.

Last month, the U.N.'s envoy to Syria, Geir Pederson, called on warring factions to implement an immediate cease-fire across the entire country so that the new coronavirus can be contained.

The Syria mediator issued his call one day after U.N. Secretary-General Antonio Guterres appealed for a global end to fighting to tackle the pandemic.

Syria has been locked in a vicious civil war since early 2011, when the Assad regime cracked down on pro-democracy protests with unexpected ferocity, which later developed into bloody clashes and interventions from external forces, including the Lebanese Hezbollah group, Iranian militia and others. Hundreds of thousands of people have been killed and more than 10 million others displaced, according to U.N. figures.

Turkey remains the host of the most refugees in the world, hosting more than 3.7 million Syrian civilians who have fled since the start of the Syrian civil war.