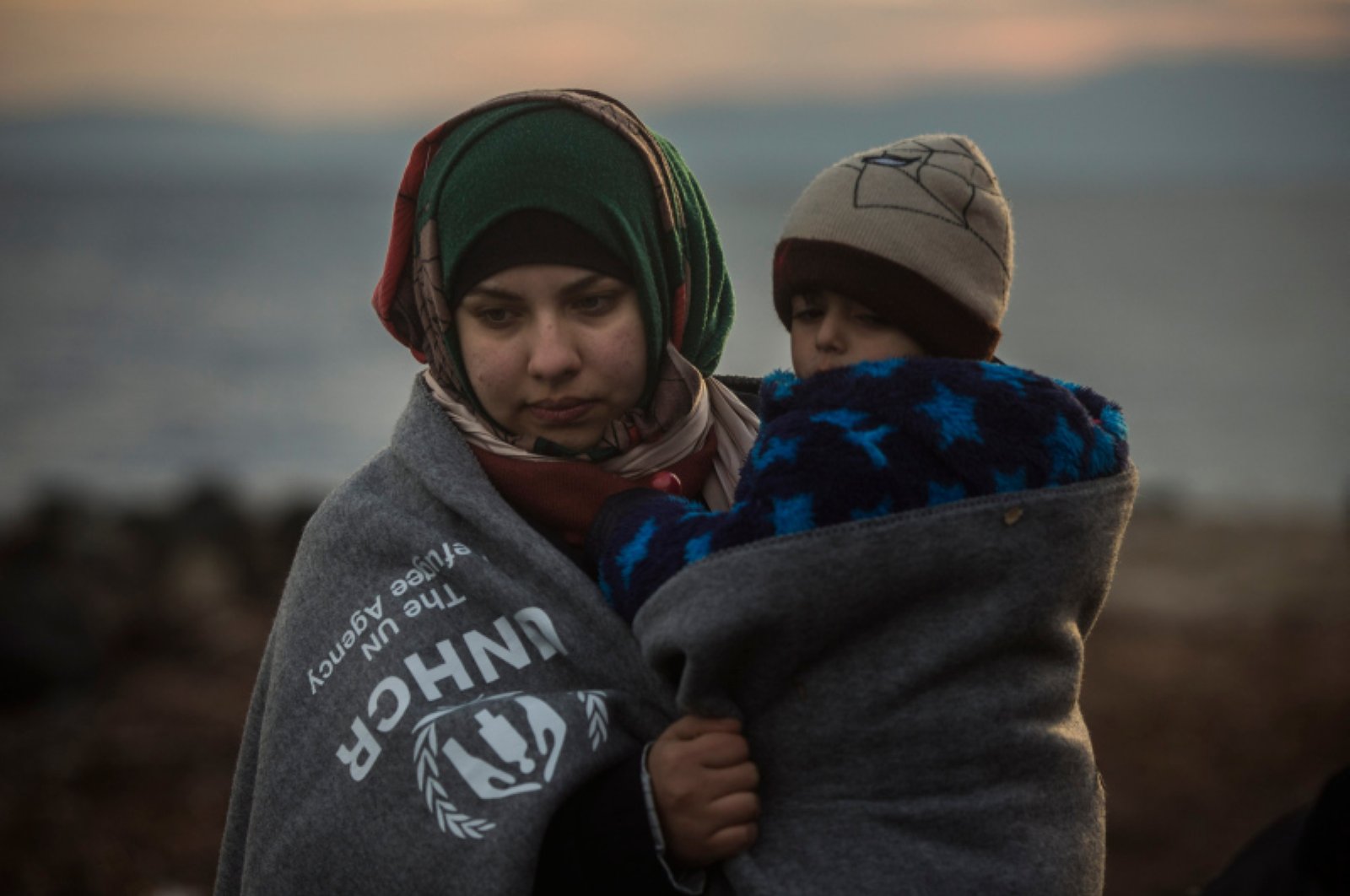 A woman holds a child on a beach near the town of Mytilene, after crossing a part of the Aegean sea on a dinghy with other refugees and migrants, from Turkey to the Greek island of Lesbos, Jan. 3, 2016. (AP File Photo)
by Daily Sabah with Wires
Jun 29, 2020 5:06 pm

Are Greek coast guard forces deliberately sabotaging refugees' and migrants' boats on the high seas as part of a strategy to push them back to Turkey, away from the Greek islands of Lesbos and Samos? German state broadcaster Deutsche Welle (DW) questioned in a piece published Monday.

"There were five masked men. One was steering, two hit us with sticks, one destroyed our boat and our engine with a knife. The fifth just watched,” DW quoted an Afghan migrant as saying.

DW also said in the piece that they verified videos provided by the Afghan refugee, codenamed Farhad for his privacy.

“They show the hole in the boat, an engine that has been destroyed, and desperate people, who eventually jump into the water to try to swim toward the shore of Lesbos while pushing the boat. A woman shakes her fist and screams, ‘They sent their friends to wreck our boat – now they're watching us.’ Indeed, a Greek coast guard vessel is clearly visible in the video,” the broadcaster said.

DW also said that the involvement of the Greek coast guard “is hard to prove.”

“There are scarcely any photos or videos of the attacks, the masked men do not wear uniforms and their boats are unmarked. That is why the other video, from June 4, is so important,” it noted.

“Through painstaking analysis of the superstructure and distinguishing features of the boats, the investigative online platforms Bellingcat and Lighthouse Reports were able to unequivocally match the rigid inflatable to a Hellenic coast guard ship. The inflatable belongs to the Greek coast guard vessel ΛΣ 080 and this ship has been proven to have been deployed off Lesbos that day,” DW concluded.

The United Nations also demands an investigation regarding the commonplace incidents that see migrants being pushed back to Turkey nearly every day.

“The U.N. High Commissioner for Refugees (UNHCR) is also concerned. Boris Cheshirkov, the spokesman for the refugee agency in Greece, confirmed to DW that, since March, it had documented dozens of incidents like these,” DW said.

“The UNHCR has called on the Greek government to investigate them and has made clear that while ‘Greece has the legitimate right to control its borders and manage irregular migration,’ it must only do so ‘while respecting international human rights and refugee protection standards.’ Hours after Farhad called the emergency hotline on June 5, their boat was still drifting on the water, gradually deflating,” the broadcaster added.

DW also said in the piece that Greek security forces reportedly do not care at all about the safety of the migrants.

“Farhad told us that, instead of coming to their assistance, Greek patrol boats drove past them, very close, trying to make waves that would wash the disabled boat back into Turkish waters,” the broadcaster concluded.

On the very day, the DW report was published, Turkey's coastguard said it rescued 35 migrants from a boat found half sunken in the Aegean Sea and was searching for four more missing people.

The migrants were rescued around 2:45 a.m. near a small island off the coast of Ayvalık in Turkey's western Balıkesir province, the coastguard said.

Greece has been the main gateway into the European Union for people fleeing conflict in the Middle East and beyond, largely via its islands near the Turkish coast. More than a million people reached its shores from Turkey in 2015-16.

Earlier this year, tens of thousands of migrants tried to cross into Greece via land and sea borders after Ankara said it would no longer stop them, as it had agreed in a 2016 deal with Brussels in return for European aid for Syrian refugees.

Turkey, which already hosts about 3.6 million Syrians, the world's largest refugee population, said it lifted restrictions on the migrants because it was alarmed by the prospect of another wave of refugees fleeing war in northwest Syria.