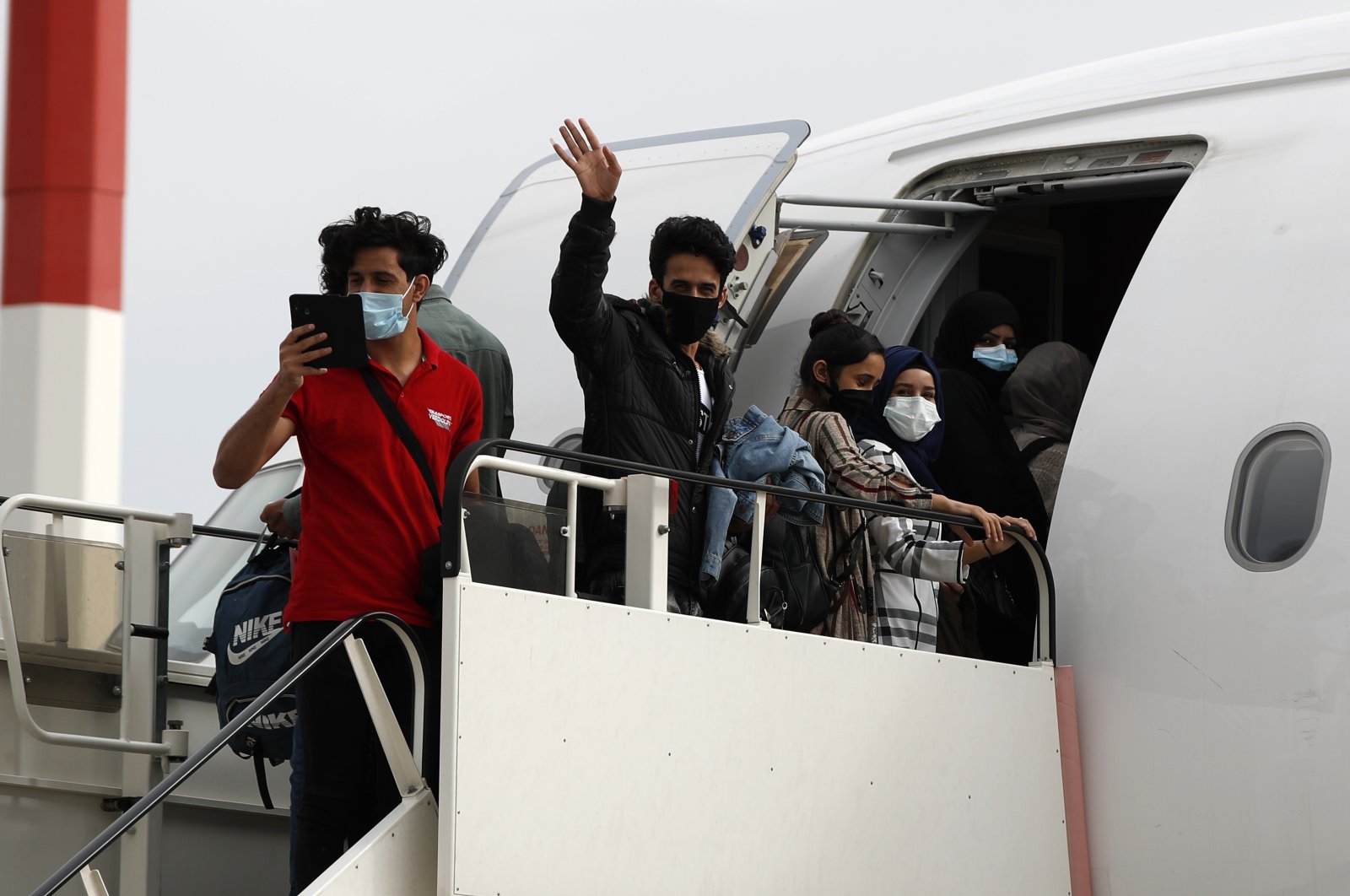 Migrants wearing face masks to prevent the spread of the coronavirus, board an airplane bound for Britain at the Eleftherios Venizelos International Airport in Athens, May 11, 2020. (AP)
by DAILY SABAH WITH AGENCIES
May 17, 2020 11:24 am

Nearly two dozen young migrants were taken to Switzerland from overcrowded camps in Greece on Saturday, according to Greece's Ministry of Migration and Asylum.

The 18 boys and five girls, between the ages of 10 and 17, came from Afghanistan and Congo-Brazzaville, and had relatives in Switzerland, the ministry added.

Germany took in 47 and Luxembourg 12 unaccompanied minors in mid-April.

The plan, announced in March, provides for around 1,600 young people, who were traveling without their parents, to be brought to other EU countries. A good 90% of the referred minors are boys.

Some 39,000 people are currently staying in camps on the islands in the east of the Aegean. According to the United Nations Refugee Agency (UNHCR), around 36% are minors.

Germany plans to take in 350 to 500 unaccompanied minors from the islands in total, preferably children under the age of 14, those who are ill and girls. Alongside Germany, countries including Luxembourg, Belgium, Bulgaria, France, Croatia, Finland, Ireland, Portugal, Lithuania and Switzerland have all made similar promises.

Tens of thousands of asylum-seekers live in dire conditions in Greek camps. The conditions have worsened recently due to outbreaks of the coronavirus. More than 42,000 people currently live in the overcrowded camps on the Greek islands, including about 5,500 unaccompanied minors. Around 10% of them are under 14 years old, according to police agency Europol.

Greece is urging the EU to help during the coronavirus crisis and has said it is ready to protect its islands.

Two more asylum-seekers who recently arrived on Greece's Lesbos island, the site of the country's biggest migrant camp, have tested positive for the coronavirus, migration ministry sources said on Friday. The cases, doubling the island's COVID-19 infection tally to four, were among the 70 to arrive so far in May.

Since March 1, all migrants reaching Lesbos have been quarantined away from the island's camps, including those arriving in the overcrowded Moria facility that hosts more than 17,500 asylum-seekers, according to the latest official count on May 13. The camp has been frequently criticized by aid groups for poor living conditions; however, there have been no documented coronavirus cases in the facility.

Greek migrant camps will remain under lockdown until May 21.

So far, there have been confirmed COVID-19 cases in two camps and at a hotel on the mainland, although none in migrant camps on the islands, where the worst congestion occurs.

Turkey and Greece have been key transit points for asylum-seekers, refugees and migrants seeking to cross into Europe to start new lives, especially those fleeing war and persecution. Greece's response to those trying to enter the country without prior authorization has been harsh. Turkish officials said earlier last month that the Greek coast guard had pushed back migrants and had attempted to sink boats carrying migrants and refugees heading toward the Greek islands by opening fire and hitting the people on the boats with long sticks.

With an aim to save the migrants from the dangers of the illegal route, Turkey's Coast Guard Command has been working hard on the shores, rescuing migrant boats nearly every day.

Turkish coast guard units rescued at least 26 asylum-seekers on Saturday who were pushed back into the sea by the Greeks as they attempted to enter Europe. The asylum-seekers set off from Turkey's Çanakkale province on the Aegean coast in a rubber boat. They wanted to reach Lesbos Island. The group, including nationals from Afghanistan, Somalia and Central Africa, were caught by the Greek Coast Guard and pushed back to Turkish waters. After rescuing them, Turkish officials gave them food and clothes. The asylum-seekers included two children and five women.

In the last two months, Turkish security guards rescued almost 200 asylum-seekers off the Aegean coast after they were forced by Greece into Turkish territorial waters.