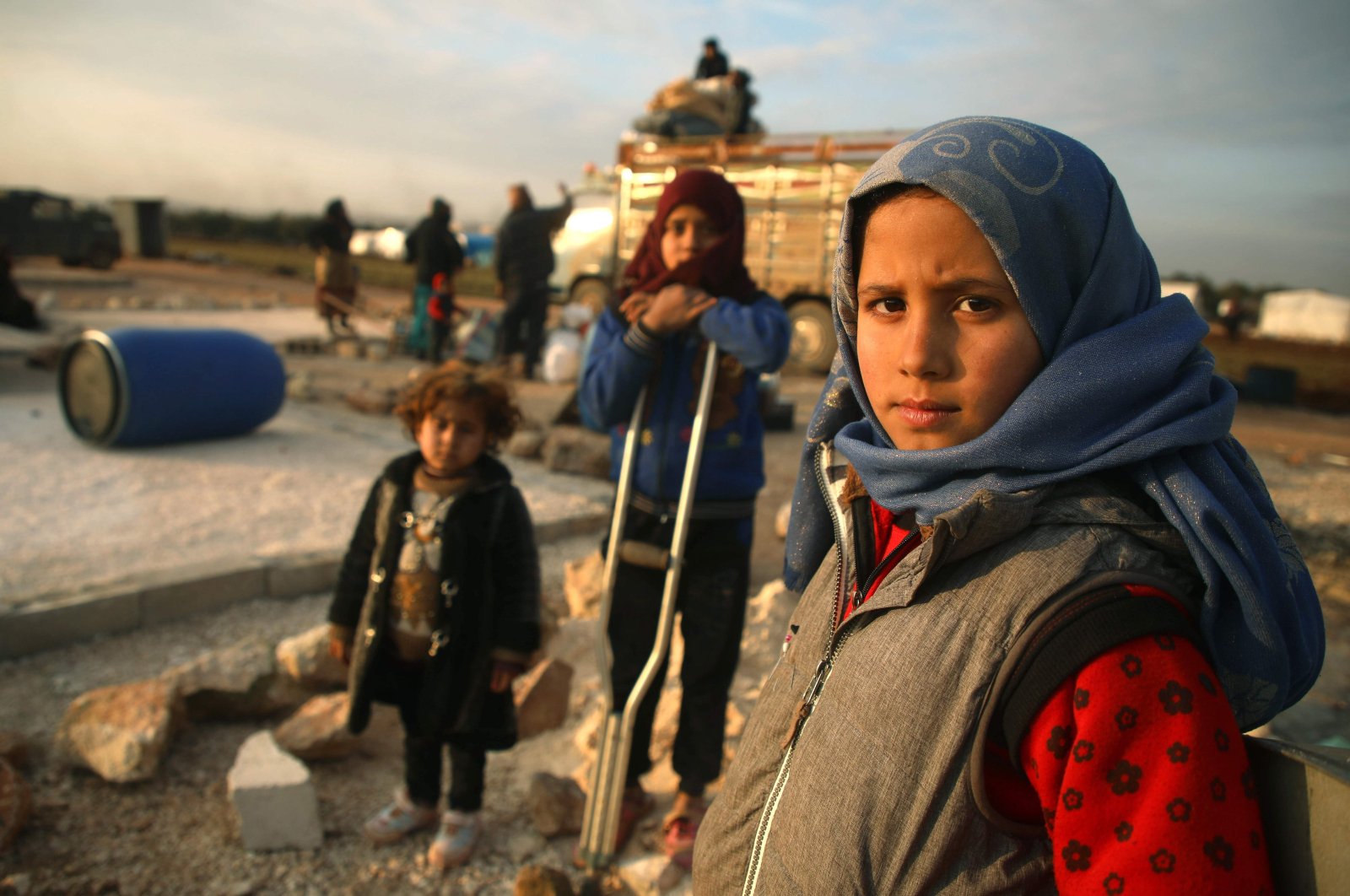 Syrian children pose for a picture as their families prepare to flee a camp for the displaced, east of Sarmada in the north of northwestern Idlib province, Syria, Feb. 16, 2020. (AFP Photo)
by DAILY SABAH WITH AA Sep 25, 2020 12:16 pm
RECOMMENDED

Turkish, Swiss, and Bosnian mothers came together to provide assistance to 100,000 Syrian children who fell victim to the decadelong civil war raging in their country.

Based in Switzerland, the international association For Children Smile was founded by four mothers from Turkey, Bosnia-Herzegovina, and Switzerland and currently all of its volunteers are mothers.

The majority of the children that received assistance are either orphans or disabled, as the association prioritizes vulnerable groups.

Within the scope of their work, the association has built a school with the capacity to host 615 orphan children in the Atme refugee camp of northwestern Syria's Idlib province.

The association also paid a visit to the Turkish nongovernmental organization Humanitarian Relief Foundation's (IHH) physiotherapy center in Hatay's Reyhanlı district and cared for the children in the center, who suffered debilitating injuries during the civil war.

Speaking to Anadolu Agency (AA), the head of the association, Emine Taş, said each child means the world to them, adding that every child should have a warm house and food, as well as educational opportunities.

"We have launched our movement with the slogan that education would change the world. As a mother, I want all children to have access to the same educational opportunities," she said, adding that all the projects of the association are being conducted with love.

"Even though we do not speak the same language with the children who are victims of the war, we share the best emotions through body language," Taş continued.

She said that even though their voluntary aid work started in 2012, they established the association just this year with the coming together of women in a multicultural environment.

"We are continuing our work with an emphasis on empathy. We see all children as our own children," Taş added.

The Turkey representative of the association, Tülay Gökçimen, who is also a director, said that she was already visiting the region occasionally to direct documentaries but recently the aid work became more prominent.

"All children matter. All children should have the same rights," she said, adding that no child should be concerned about what to eat at night.

Syria's war has devastated the country's economy since 2011, plunging 80% of its population into poverty, according to the United Nations.

For years, many stakeholders have said Syrian leader Bashar Assad has ignored the needs and safety of the country's people, only eyeing further gains of territory and crushing the opposition. With this goal, the regime has for years bombed vital facilities such as schools, hospitals and residential areas, causing the displacement of half of the country’s population.

The situation is especially critical in opposition-controlled areas in the northwestern provinces of Aleppo and Idlib, regions the Assad regime has vowed to take back. With almost 50% of the nation's health facilities out of service and many living in overcrowded tent camps deprived even of basic needs, the Syrian people are also extremely vulnerable to the coronavirus pandemic.

The situation is even more concerning when it comes to children.

Idlib is currently home to about 4 million civilians, including hundreds of thousands displaced in recent years by regime forces throughout war-torn Syria. Some of those who were displaced have used a recent cease-fire brokered by Turkey and Russia as an opportunity to return home.

Still, due to overcrowding and the lack of essential infrastructure in the displacement camps, displaced civilians face great difficulty in finding places to take shelter. Thousands of families are in dire need of humanitarian aid as they struggle to live amid harsh conditions.

Meanwhile, as the humanitarian aid activities in the region continued at full speed, especially thanks to the efforts of Turkey, the U.S. also announced Thursday that it will provide more than $720 million (TL 5 billion) in additional humanitarian assistance for Syria.

"The international community must remain committed to meeting the increasing needs of the Syrian people," U.S. Secretary of State Mike Pompeo said in a statement.

The top diplomat also called for holding the Assad regime "accountable for its devastating military campaign and brutal disregard for human rights, including the arbitrary detention of over 100,000 Syrian civilians, the vast majority of whose whereabouts are currently unknown."

With Thursday's amount, Washington has provided more than $12 billion since the start of the Syrian crisis.