Nearly 120,000 displaced Syrians return to Idlib thanks to cease-fire 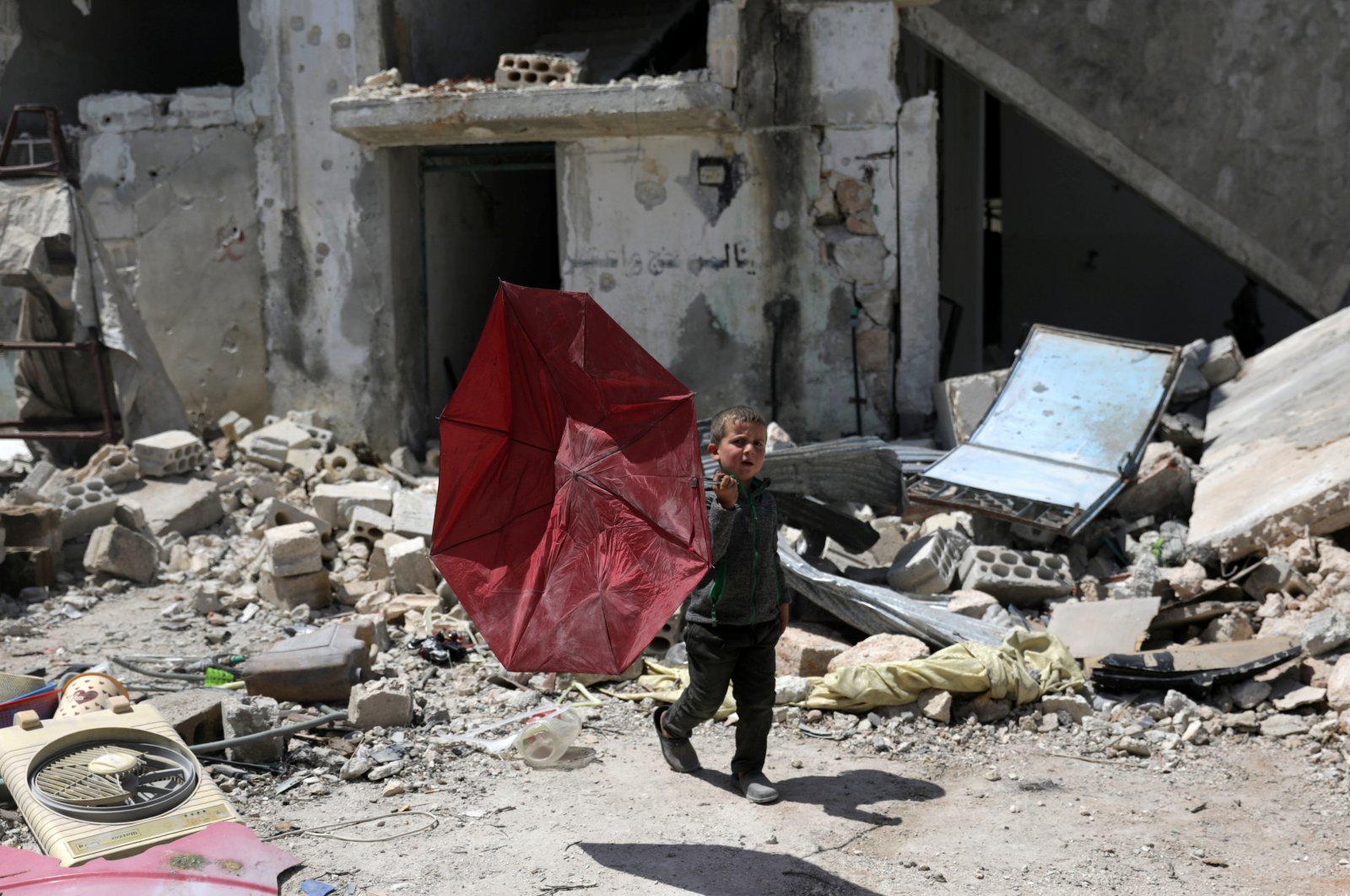 A boy carries a broken umbrella as he walks past a damaged building in the rebel-held town of Nairab, in northwest Syria's Idlib region, Syria, Friday, April 17, 2020. REUTERS
by DAILY SABAH WITH AA Apr 19, 2020 2:08 pm
RECOMMENDED

A total of 119,683 displaced civilians have returned to their hometown in northwestern Syria's Idlib province since the implementation of the cease-fire brokered by Turkey and Russia on March 6, while civilians whose hometowns are located in areas under Bashar Assad regime control still stay in the camps near the Turkish border.

Speaking to Anadolu Agency (AA), Mohammad Hallaj, director of Syria's Response Coordination Group, said in the last one and a half months, nearly 21,500 families have been able to migrate back to their homes.

Hallaj called on the humanitarian agencies to increase their aid for the returning civilians while warning the civilians to be careful of the remains of the war in the areas they return to.

He also highlighted that hundreds of thousands of civilians refuse to return to their hometowns since those locations are still under the regime's control and thus continue to stay at camps near the Turkish border.

"As long as attacks do not restart, more civilians would return to their hometowns," Hallaj expressed.

One of the returned civilians, Mustafa Tabşo, who had to leave his home two months ago due to regime attacks, said that he wishes to spend the holy Ramadan month at his home.

"After the last attacks, I had to migrate to Afrin. Now, hopefully, I'm returning," he said, adding that there are many other refugees like him.

Another refugee, Abu Teym, stated that they decided to return since their circumstances are getting better.

"Wherever you migrate to, there is no place like your home. Ramadan is around the corner, and now, hopefully, we will spend it at our homes," he underlined.

The population of the province had gradually increased with many people running from regime attacks and terrorist torture. However, the displacement of civilians has intensified since mid-December when the Russian-backed Assad regime started a new assault to seize the last opposition bastion. It is estimated that over 1 million Syrians have moved near the Turkish border due to intense attacks over the last year, while half of this number was displaced after November 2019. After heightened tensions, Russia and Turkey last month reached an agreement to halt violence and the flow of displacement. As part of the agreement, all military activities will end in Idlib and a security corridor will be established 6 kilometers (3.7 miles) deep to the north and to the south of the M4 highway.

In Syria's northwest, some 3 million people are trapped in a shrinking opposition stronghold battered by months of bombardment, especially in Idlib. Hundreds of thousands of people in overcrowded settlements are teeming with fresh arrivals, and many of the displaced are forced to sleep in freezing temperatures in open spaces.

Even though nongovernmental organizations, the United Nations and Turkish institutions and relief organizations are doing their best to meet the needs of the many civilians in the war-torn country, in the face of the new coronavirus threat, aid is insufficient. In a situation where even the most developed and modern countries are desperate in the fight against the virus, it is hard to expect a country with almost no standing hospital and where children cannot find water to wash their hands to cope with the threat. Only half of the countries’ medical facilities are still operating.

Recently, a car explosion in Idlib city center Friday caused two civilians, one of whom is a child, to be injured. It was reported that the explosion was caused by a device placed in the car.