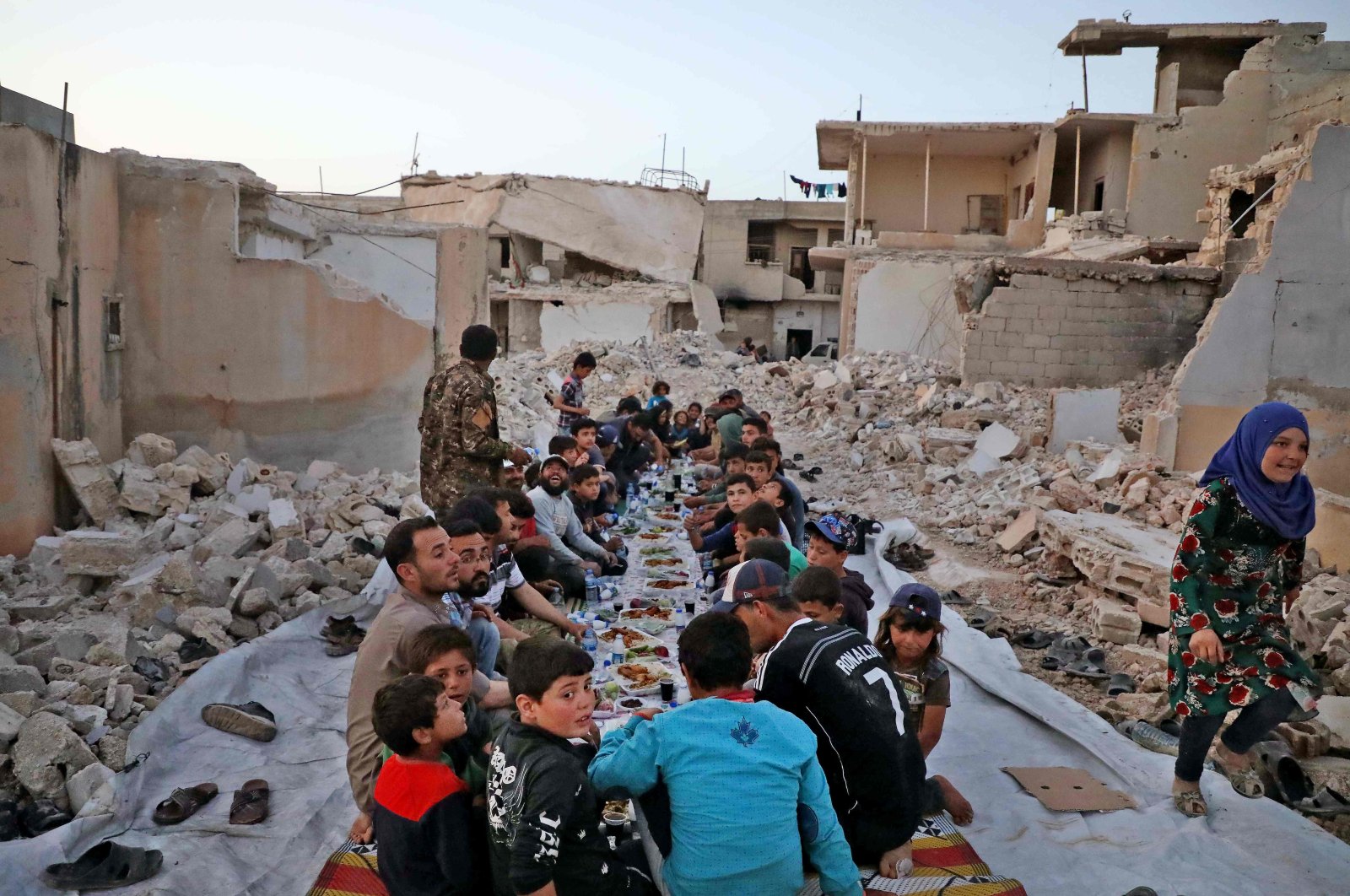 This picture taken on May 12, 2020 in the village of Kafr Nuran in the western countryside of Syria's northern Aleppo province shows men and children seated together in the midst of ruins before starting the "iftar" fast-breaking meal consumed by Muslims at sunset during the holy fasting month of Ramadan. (AFP Photo)
by Compiled from Wire Services
May 13, 2020 11:36 am

Moreover, close to a million people have been internally displaced in the war-ravaged country since December 2019, the agency's spokeswoman Elisabeth Byrs said in video briefing from Geneva.

"They now live in overcrowded camps where an outbreak of COVID-19 could have devastating impact consequences," she said.

Byrs said cases of the novel coronavirus had been confirmed in Syria and containment measures had been introduced.

"WFP is doing all it can to ensure that beneficiaries receive their entitlements in as safe a way as possible," said Byrs.

"Across northwest Syria WFP and partners' staff provided life-saving food assistance to 1.7 million people. And it's vital to WFP to continue to deliver this food assistance via cross border operation from Turkey," said Byrs.

The U.N. agency and its partners are implementing COVID-19 mitigation measures such as encouraging hand-washing and raising awareness for social distancing at food distribution points.

Idlib has long been under siege by forces of Syria's Assad regime and its allies.

Turkey has worked for years to protect the local civilian population against regime violations as well as rid the wider region of terrorist elements.

Amnesty International had recently called on the United Nations Security Council not to cut aid to civilians in Idlib, as a U.N. resolution allowing humanitarian assistance to the region is set to expire.

The latest fighting in Idlib has forced almost 1 million people, over 80% of whom are women and children, to flee toward Turkey.

In July 2014, the Security Council unanimously passed a resolution allowing the delivery of cross-border aid to northwestern Syria and other opposition-held areas without the Syrian regime's consent.

The resolution, which has since been extended a number of times, albeit with increased difficulty and reduced scope, is set to expire on July 10.

The Syrian regime and its backers want the aid to be channeled through Damascus, making it more difficult for the U.N. and humanitarian agencies to deliver timely and sustained aid.

International aid organization Save the Children on Tuesday urged countries to repatriate the thousands of foreign children living in an overcrowded refugee camp in northeastern Syria amid the coronavirus pandemic.

"The desperate plight of all children living in limbo in Al Hol is even more alarming given the global pandemic the world is facing," Sonia Khush of Save the Children said in a statement.

But more than 7,000 children are citizens of another country, including about 100 from Germany. Germany has so far only brought back seven children from Al Hol.

Save the Children said water and electricity shortages in the refugee camp made it extremely difficult for people to follow the best hygiene practices to prevent the virus from spreading.

As people fled from the Daesh terror group, the population of Al Hol exploded from around 10,000 at the start of 2019 to its current state, making social distancing nearly impossible, the aid organization said.

"Al Hol was never meant to host as many people as it currently does," Khush said.

The consequences of a COVID-19 outbreak would be devastating.

Syria so far has had 47 confirmed cases of the coronavirus and three deaths, according to Johns Hopkins University. Only one case and one death have been confirmed in northeastern Syria.