Postmodern coup of Feb. 28 looked back on as inglorious nadir of recent history 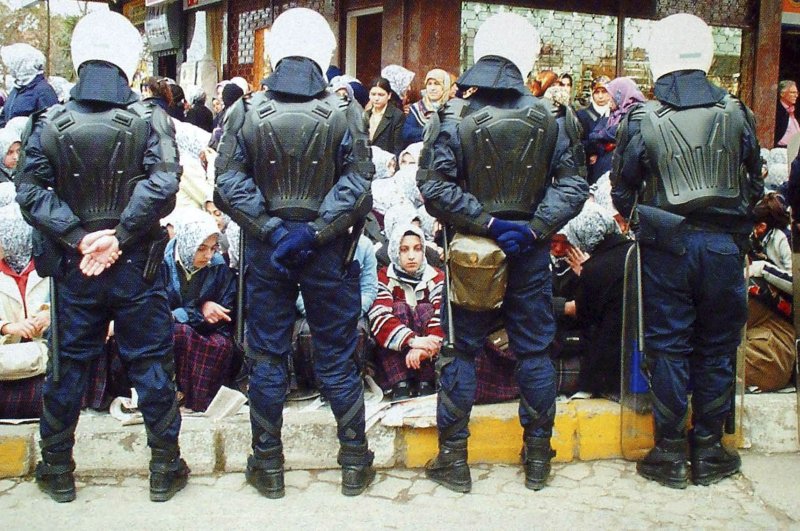 More than two decades later, Turkey is still trying to heal from wounds made by the process following the postmodern coup as victims seek remorse

The year 1997 will forever be marked as one of the lowest points of Turkish politics as it became the scene for a “postmodern” coup that rocked millions of people’s lives, causing deep wounds that will never heal, especially among the conservative segments of Turkish society.

Twenty-three years ago today, a military memorandum was issued by the National Security Council of the country. Despite seeming to be just another memorandum, the move and the decisions that were included within the memorandum triggered a series of events, starting from the resignation of then-Prime Minister Necmettin Erbakan, and eventually became one of the turning points in Turkey’s political history. The memorandum’s main premises were to shut down the imam hatip schools and prevent religious activities under the pretext of separating religion from the state.

However, probably the biggest outcome of the move was to ban women wearing headscarves from entering into any public buildings, including schools and universities. This ban caused millions of young women to give up their education or to suffer while trying to receive a proper one. Female teachers were also dismissed from their jobs if they refused to remove their headscarves, and the abhorred practice of "persuasion rooms" was launched in universities, where headscarf-wearing students would be "persuaded" to remove their headscarves amid threats of expulsion from the school. Women wearing headscarves were also not permitted to work.

“We were not even allowed to enter the campus of the university, let alone our classrooms. During that period, I had friends who were arrested (while trying to enter the university). There were even squads coming from counterterrorism departments of the security forces to fight against us. In the end, I had to leave my school,” said Kevser Tüfekçi, one of the millions of victims of the period.

According to Tüfekçi, who spoke to Anadolu Agency (AA), even if some of her friends somehow managed to continue their education, most of them by removing their headscarves, they suffered major psychological damage due to the intense pressure of the period.

After the military intervention of Feb. 28, Merve Kavakçı was elected from the Virtue Party in 1999 as the first female deputy to wear a headscarf. However, during the swear-in ceremony for Turkey's Grand National Assembly, she was not allowed to take her oath of office by the prime minister at the time, Bülent Ecevit, and other lawmakers, mainly members of the Democratic Left Party (DSP).

Another victim, 47-year-old teacher Gülseren Şit, also had to leave her university during that time period and, to this day, still struggles to forget the harsh memories of those difficult days.

Entering into Celal Bayar University’s Education department despite her family’s financial difficulties, Şit recalls that she was quite an ambitious student who was determined to make her family proud.

“I was working so hard to finish my school. Yet, it did not happen,” Şit said, adding that she got expelled from the school when she was in her senior year.

“They wrote in the official documents that we failed our classes due to absence,” she expressed, adding that despite their determination to continue going to school, their teachers pressured them to quit by stating that they were putting them into a difficult position by continuing to come.

In Şit’s opinion, although it has been more than two decades, their suffering still continues.

“We demand the injustices that were made at the hands of the state to be re-established in the form of the restoration of honor,” she emphasized.

Since the postmodern coup’s harsh days, many who lost their rights to work or study won legal battles and returned to their previous jobs, yet the years lost in the process cannot be relived.

One of the symbolic figures of the era, Dilek Gürgen Yıldırm, said that the coup came at a period when they did not even know what a coup was. Speaking to the Sabah daily, Yıldırım made headlines at that time due to her tragic story in which she lost her right leg during the protests against the headscarf ban in front of Nilüfer Imam Hatip High School in Bursa province on Dec. 21, 1998. Continuing her life with a prosthetic leg, Yıldırım eventually concluded her education at the University of Sarajevo in Bosnia-Herzegovina.

“We did not even know what a coup means and yet, we had to be the addressees of it,” she said.

According to Tülay Gökçimen, an awarded director, it was even difficult to walk in the streets as a woman with a headscarf at that time.

“We were not allowed to do many things as women with headscarves. It was even difficult to walk on the street. I remember very clearly,” she said, adding that she was not even allowed to sit for her university exams.

The seeds of the process that led to the widespread attack on conservatives after Feb. 28, 1997, were planted on June 28, 1996, when the RP succeeded in forming a coalition government with the center-right True Path Party (DYP) and Erbakan became prime minister. Soon after, mainstream media, supported by the top brass in the military, started to attack the government, accusing it of threatening secularism and Kemalism. The pressure culminated in a military ultimatum issued by top generals in the National Security Council, which was dominated by the military.

On May 21, 1997, the Chief Prosecutor's Office at the Supreme Court of Appeals filed a complaint in the Constitutional Court that called for the closure of the RP, accusing it of being "the center of illegal activities, with some members threatening the secular regime." A few weeks later, every member of the Constitutional Court was taken to the Office of the Chief of General Staff for a briefing on the dangers of fundamentalism. While at first Erbakan resisted the pressure, he was eventually forced to step down on June 18, 1997.

Despite the leaders of the so-called post-modern coup believing the system they imposed would last 1,000 years, it collapsed in just five due to heavy-handed oppression and an economic crisis in 1999. The crisis created the grounds for ousting Erbakan from the prime ministry, which was followed by the installation of a string of coalition governments, whose unsuccessful administrations paved the way for economic catastrophe. After a turbulent three years, Erbakan's protege, President Recep Tayyip Erdoğan's Justice and Development Party (AK Party), gained an overwhelming majority in the 2002 general elections.

In a landmark decision, a Turkish court ruled in 2018 for aggravated life imprisonment of 21 suspects, including retired Chief of Staff Gen. İsmail Hakkı Karadayı and his deputy Gen. Çevik Bir, in the Feb. 28, 1997, post-modern coup case. The sentence was reduced to life imprisonment, but the defendants were not arrested due to old age and health problems. The defendants were banned from leaving the country and will remain under judicial control.

After all the sufferings, trials and remorse, the headscarf-wearing women occasionally make headlines even to this day for the discrimination they face in the private sector in Turkey where they have been barred from schools and the public sector for decades.