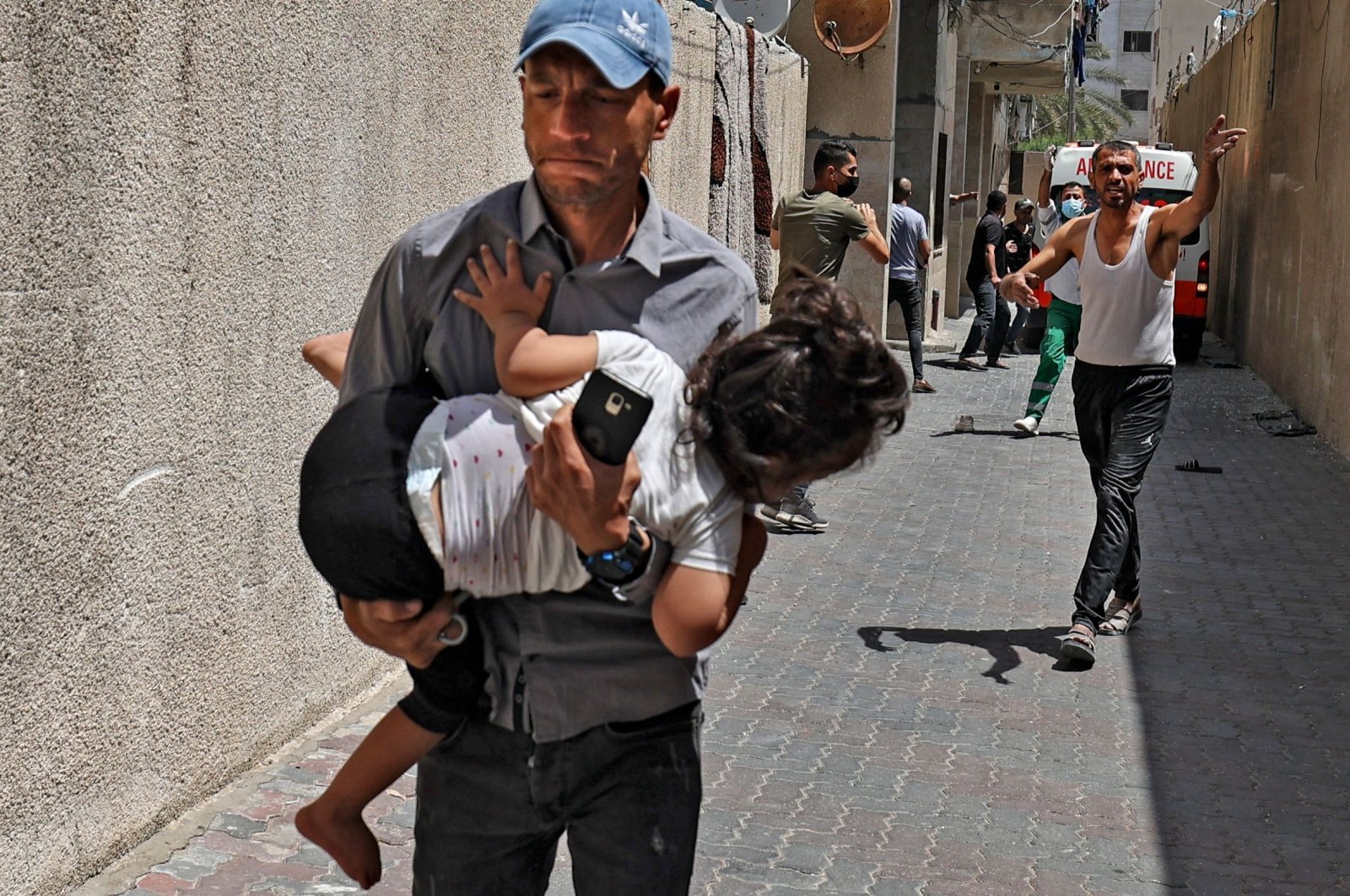 Palestinians evacuate a building targeted by Israeli bombardment in the Gaza Strip, Palestine, May 11, 2021. (AFP Photo)
by Nur Özkan Erbay May 12, 2021 11:12 am
RECOMMENDED

As one of the most important thinkers of the 20th century, the founder of the theory of Orientalism, Edward W. Said provided some very important messages in his 1981 book "Covering Islam: How the Media and the Experts Determine How We See the Rest of the world,” which highlights the Western-dominated media’s problematic and systematic discourse and stance on the East today and tomorrow.

Said, an American-born Palestinian and Lebanese thinker and a strong advocate of the Palestinian cause, deeply analyzed the mind-setting processes and building up of the Western media’s discourse on the East and Islam. He explained how the state policies of the United States and Israel shape and dominate mainstream media, and have turned them into public relations machines, especially when the issue comes to Palestine.

Perhaps, that is why Said chose the word "cover" in his book title, which means both to report news in journalism terminology and to hide something, that is cover it up. He presents evidence in his work that the Western media's lack of reporting on and the covering up of the facts and truths about Islam and Muslims has created a distorted image of these subjects.

Today, Israel's occupation of the Palestinian territories, which is a continuation of the nation's violence every year since 1948, remains a wound in the conscience of not only humanity but especially for journalists, intellectuals and thinkers who ought to pursue the truth.

Israel's actions of occupation, massacres, raids and imprisonment, which bear all the characteristics of state-sponsored terrorism, reached their peak again with the attacks carried out during Ramadan prayers at the Al-Aqsa Mosque in previous days.

In the face of these attacks and reactions, another situation that is as just grave as these attacks – which the state of Israel wants to be perceived as ordinary – is that Western media itself once again seems to be under Israeli occupation.

As Said mentioned in his ideas and works that remain pertinent even today, in the subconscious, behind these clichés and the familiar and unchanged stance of Western media, lies the concern of how the persecution of Palestinians and the land of Palestine for more than half a century can be sugarcoated in Israel's favor.

Since then, covering up the facts and distorting and manipulating them in favor of Israel with word tricks has become the norm. Reporting ethical concerns, conscience and truth are not even a priority in the face of covering up Israel's illegal and inhumane actions. Thus, the killing of unarmed Palestinians by the Israeli army or police is presented as a “conflict” or “fight” between two armed parties by the Western media.

Moreover, these media outlets face no ethical dilemmas when it comes to not reporting on the Israelis who are trying to steal Palestinians’ houses in Sheikh Jarrah. In fact, instead of covering the videos of illegal Israeli settlers, they choose to stay mute.

Due to this veiled journalism, the world does not have access to the footage of Israeli fanatics who came to support the Israeli police who attacked Al-Aqsa Mosque, ripping their own clothes to lay the blame on Palestinians and saying, “the Palestinians attacked us.”

These same media outlets will mostly use the words “conflict” and “fight” and try carefully not to bring the words Israel and “occupation,” “massacre” or “attack” together.

Eventually, these news reports do not convey the facts, but rather cover up the truth. This means nobody sees that the Palestinians praying at the Al Aqsa Mosque are actually dying as a result of the Israeli police’s attacks with real bullets, stun grenades and other weapons.

The world is also not made aware of the illegal tunneling and excavation work carried out by Israel at the Al-Aqsa Mosque, despite the warnings from UNESCO. This is because Western mainstream media outlets such as The Associated Press, Reuters, The Wall Street Journal, The New York Times, The Washington Post, CNN, Fox News, the BBC and Bloomberg do not cover how Israel is destroying the ruins there, which not only belong to Muslims, but also to the heritage of civilization.

While Muslims allow Jewish people to freely worship at the Wailing Wall in Jerusalem, Israel destroys the cultural and religious heritage of Muslims and bans them from entering the land to which they belong, yet there is no news coverage of this.

Furthermore, it would not be wrong to say that the Western media outlets, which can remain so blind and deaf to the invasions and massacres carried out by the state of Israel, which practices racism, discrimination and the worst forms of humanity, also lack a conscience.

After all, it is impossible to expect ethical examples of journalism from these outlets which violate the principle of fair and balanced journalism, because they prioritize covering up all of the illegal and inhumane acts of Israel.

On the night of May 10th, the bombs dropped during an attack by Israeli forces caught alight a tree in the courtyard of the Al-Aqsa Mosque. Western media, which is under the voluntary occupation of Israel, could not even question the images of fanatical Israelis dancing and screaming for joy while the mosque was burning.

It is possible to provide examples in this regard of how these outlets try to cover up Israel's attacks and crimes, and reflect the same biased and veiled discourse in their headlines and leads. New York Post: “Hamas forces killed 20 Israelis as a result of air attacks including 9 children.” In a related news report, the BBC claimed that Palestinians were the source of the tension, and wrote "Jerusalem crisis: demand for composure as violence escalates."

Furthermore, “The violence escalated after Palestinian militants fired rockets into Jerusalem on Monday night. The most violent clashes in Jerusalem in recent years have quickly turned into mutual rocket attacks," The Washington Post reported, again covering up Israeli aggression.

As can be clearly seen, when the issue comes to Palestine, the Western media, whose job should be to cover the truth first and foremost, prefers not to see, hear or know the facts. They have clearly shown a preference for using their profession to cover up the crimes and invasions committed by Israel. This drives home the fact that Israel today not only occupies Palestinian lands and kills Palestinians, but also invades the journalistic will of the Western media. The only difference is that the media voluntarily accepts this invasion. Now the question that should be asked is, who will believe that they are truthful, impartial and reliable anymore?