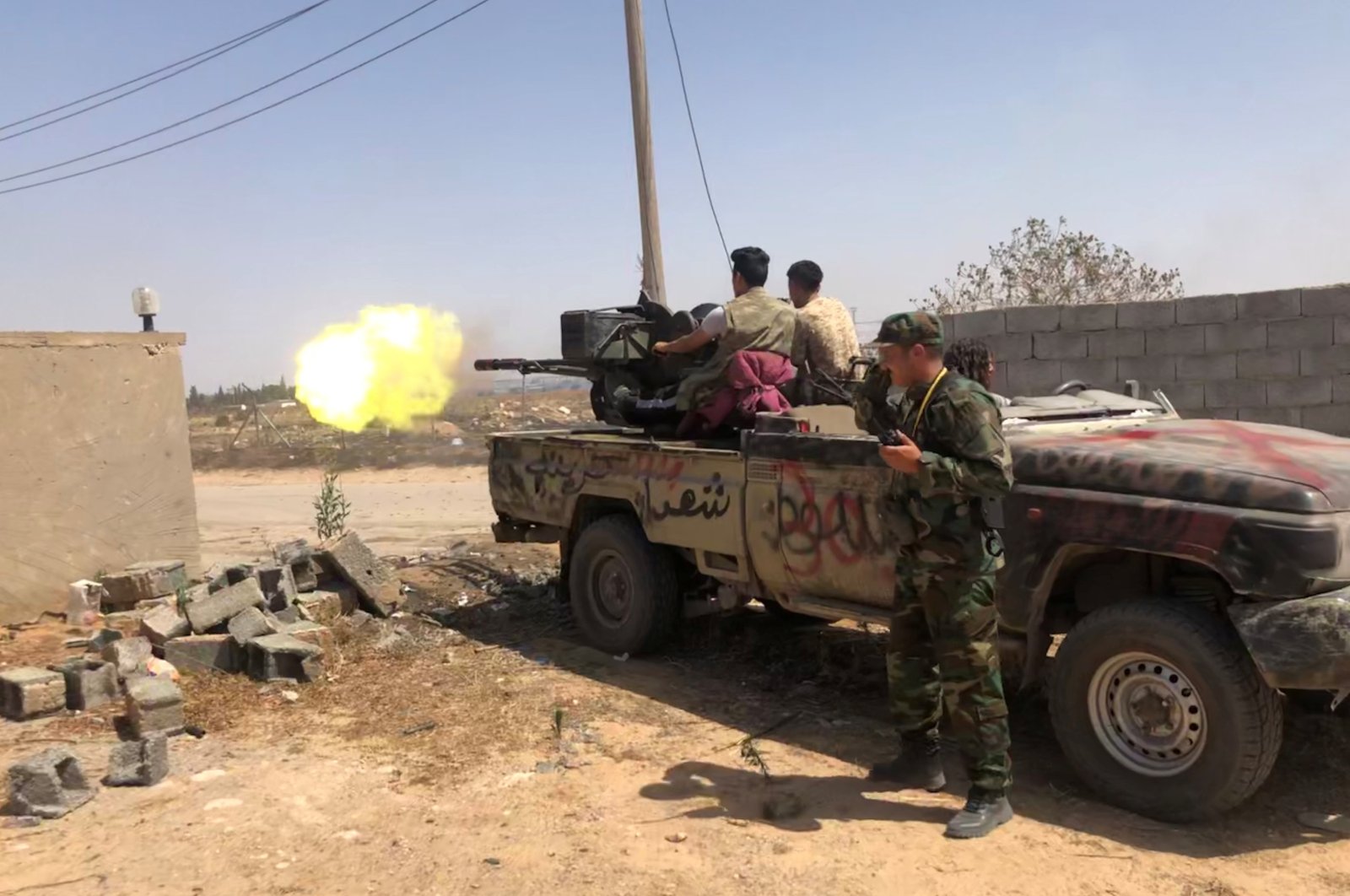 In search of a lasting peace, Libyans have engaged in U.N.-led talks to hold national elections and hammer out a new transitional government – yet the road head poses many challenges

Libyans at U.N.-led talks agreed to hold national elections in December next year following a cease-fire agreement signed between the rival sides, raising hopes to achieve a lasting political settlement to the decade-old conflict. Yet the road to peace hinges on preventing both internal and external spoilers as well as a strong commitment and removing the shortcomings of the cease-fire text.

Since the civil war in Libya began in 2011 with the ouster and killing of longtime ruler Moammar Ghadafi, there has been no shortage of western proposals to reestablish peace and stability in the country.

After years of chaos and violence, the internationally recognized government in the west and its eastern-based rival consisting of a House of Representatives (HoR) backed by the forces of putschist Gen. Khalifa Haftar, have once again taken steps toward a political solution by engaging in U.N.-led talks in Tunis. Dubbed the Libyan Political Dialogue Forum (LPDF), the talks aimed at hammering out a deal for a new transitional government for the oil-rich North African country. However, the Libyan people are torn between hopes and doubts as several previous attempts for cease-fires and settlements have failed.

Friday's announcement for national elections to be held on Dec. 24, 2021, came on the fifth day of political talks in Tunisia, involving 75 delegates from existing state bodies and groups from across Libya's political and social spectrum.

Delegates are tasked with appointing a three-member Presidency Council representing Libya's three historical regions and a prime minister to lead a separate Government of National Unity.

The 75 delegates meeting in Tunisia were selected by the U.N., but some Libyans have questioned their legitimacy and criticized the way they were chosen.

Speaking to Daily Sabah, Noamane Cherkaoui, a researcher and political analyst focusing on North Africa geopolitics, said the list for the forum involves “recycled participants from the past many of whom have seen their influence wane over time.”

Cherkaoui stated that some within Libya consider these delegates as non-representative.

“Divisions are increasing, with some members of the HoR and the (Libyan High Council of State) HCS using this opportunity to jockey for influence, particularly due to the vulnerability of their positions if elections are eventually held,” Cherkaoui underlined.

Similarly, acting U.N. envoy Stephanie Williams on Friday in a press conference stated that there is “a large status quo party in Libya.” These are factions and individuals who are seeking to block progress or undermine the process and who are only interested in retaining their current privileges at the expense of the Libyan people, the envoy stressed.

“Elections are a threat to Libyans who have illegally amassed power and wealth in the past few years as well as to war criminals and their state backers,” Muntasser warned, saying that the Tunis agreement offers these players a new transitional period during which they can extend their reach and strengthen their grip on power.

“It will be a fragmented government with many opposing priorities, allegiances and interests,” Muntasser stated while Cherkaoui said that whether a successful outcome will be reached, “considering the interference by illegitimate external forces, the lack of diversified buy-in, the institutional infighting and the conflicting diplomatic tracks,” remains to be seen.

The Tunisia talks are held in parallel with military discussions in the coastal city of Sirte to fill in the details of a cease-fire deal struck in October which made official the halt of fighting since August. Prior to that, Haftar, allied with the HoR, launched an offensive in April 2019 to seize Tripoli from the U.N.-backed Government of National Accord (GNA) but was repelled with Turkey stepping up its support to the legitimate government after signing a maritime and military deal.

The conflict has cost tens of billions of dollars in lost oil revenue and damaged infrastructure and sharply reduced living standards.

Though hailed a “breakthrough” by the U.N., the recently inked cease-fire lacks specificity in many regards and may lead to different interpretations by the parties to it.

Libya's warring sides agreed in Geneva that foreign military forces and mercenaries are to leave the country.

Crisis Group in a report on Nov. 4 highlighted that the main problem is that neither side officially acknowledges being supported by foreign fighters, which could lead to future backtracking.

It said that on Haftar’s side, an estimated 2,000-3,000 Russian Wagner Group contractors, pro-Damascus Syrian fighters and a second collection of Chadians and Sudanese would have to leave Libya.

U.N. experts similarly confirmed in early May that mercenaries from the Wagner Group, a Russian paramilitary organization said to be close to the Kremlin, are fighting in Libya in support of Haftar, alongside Syrian fighters from Damascus.

The GNA on Thursday indicated it would not accept further talks under the presence of foreign mercenaries and their anti-aircraft systems in Sirte.

“There are many obstacles ahead,” Cherkaoui pointed out, “Notably, the implementation of all contentious issues was given to future subcommittees and expelling all mercenaries, on which it lacks leverage, within three months is an uphill battle.”

He added that convincing armed groups to leave is another element difficult to implement while the constant consolidation of the strategic Sirte-Jufra line, roughly the midpoint of Libya's Mediterranean coastline and a gateway to major oil ports, poses another challenge.

Another item agreed to in the cease-fire was that “all military agreements on training inside Libya shall be suspended and training crews shall depart the country.”

Turkey on Saturday echoed the Libyan position saying it would keep up consultations with Libya and continue military and security training for Libyan forces.

Furthermore, the Libyan and Qatari defense ministers last week signed a similar cooperation protocol for training and building Libyan military capabilities as well as the exchange of expertise.

Foreign mercenaries and arms have poured into Libya especially during Haftar’s 14-month offensive on the capital, undercutting diplomatic efforts.

Turkey and Qatar’s support for the legitimate government has prevented the fall of Tripoli and staved off Haftar’s militia, who enjoy backing from countries including the United Arab Emirates (UAE), Egypt, Russia and France.

“Turkey’s support was critical to tilting the offensive on Tripoli by Haftar’s LAAF in the GNA’s favor, preventing a fait accompli,” Cherkaoui pointed out.

Regarding Haftar’s backers, Cherkaoui stated that each has certain interests in the war-ravaged country.

Saying that Russia operates outside international law by supporting efforts against the U.N.-backed government, he said that Moscow is driven by pragmatism, “coveting preferential access to Libya’s resources, further regional leverage and another naval base to outflank NATO and further solve its traditional strategic impediment of a shortage of warm-water bases.”

Russia has built its strategy on plausible deniability by carrying out actions through the Wagner Group, Cherkaoui said, elaborating that though it supported Haftar in the war for Tripoli, Moscow cooled down its support expressing interest in bringing back the Gadhafi family.

Haftar’s most important supporter through the conflict has been the UAE, which has similarly provided mercenaries and supplied weapons and ammunition to its forces while operating a base in eastern Libya, according to the U.N. and rights groups including the Human Rights Watch (HRW).

“The UAE has allocated considerable financial resources to the destabilization of the GNA in Tripoli,” Cherkaoui said, adding that Abu Dhabi’s stance is also aimed at undercutting Qatar’s position on the conflict.

Indicating that France belongs to the UAE-Egypt axis in backing the warlord, the expert said that Paris has tried to play both sides. “Therefore, France is not being seen as sincere by the internationally recognized government. Ultimately, Paris nurtures a long-term goal of enhancing its presence in the region with an eye on Libya’s extensive energy resources,” Cherkaoui said.

Having a border with Libya, Egypt has initially backed Haftar but backed down from this policy as the situation on the field changed, the expert stated. Egypt in recent weeks has invited key GNA figures to Cairo while hosting talks in the Red Sea resort town of Hurghada in October.

“This is indicative of its desire not to be sidelined,” Cherkaoui said.

With the extensive military, financial and diplomatic backing from foreign powers, Haftar has committed serious war crimes throughout his campaign against the capital.

The chief prosecutor of the International Criminal Court (ICC) reported last week that Haftar’s offensive involved a pattern of violence and the use of mines by retreating forces that harmed civilians, which is a war crime when used indiscriminately.

Over 100 bodies have been found, many blindfolded and with their hands tied, in mass graves in Tarhuna, 90 kilometers (56 miles) northeast of the capital Tripoli and which Haftar’s forces used as a base to launch their attack in April 2019.

Though the recent cease-fire addresses military and security measures, the issue of accountability seems to have been swept under the rug.

“Failure to see justice done will only hamper aspirations for a durable peace,” the HRW stated on Oct. 29, stressing that accountability for crimes should follow the cease-fire agreement.

“What the agreement does not provide is a clear commitment and a pathway to accountability for the serious crimes and other abuses perpetuated by the conflict parties with the support of their foreign backers,” the rights group highlighted.

Muntasser elaborated that this penetration of state institutions would weaken the state and allow a dictator to wage a coup from within. “In Libya, war criminals are being rewarded not prosecuted,” he added.

Cherkaoui similarly stated that political processes in recent years have “neglected to offer a viable pathway to accountability.”

Institutions for handling justice and human rights issues should be established, he stated yet pointed to the fact that the U.N.’s recently authorized fact-finding mission, led by the Human Rights Council and called for by Libyan activists for years, suffers from a lack of funding and has seen its mandate of investigating human rights abuses in Libya since 2016 delayed.