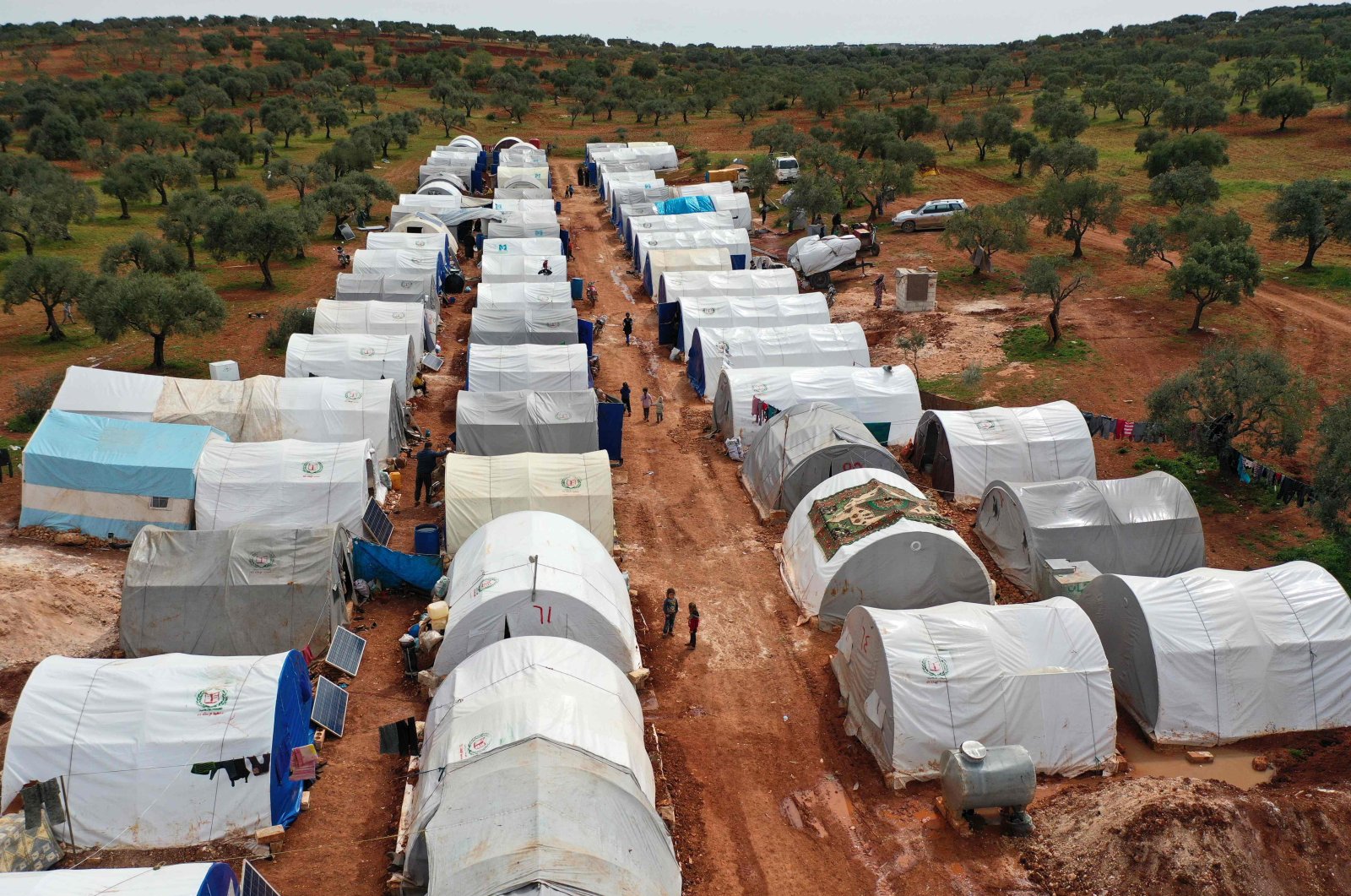 An aerial view of a camp for displaced Syrians from Idlib and Aleppo provinces, near the town of Maaret Misrin in Syria's northwestern Idlib province, Sunday, April 5, 2020. (AFP Photo)
by Eralp Yarar Apr 09, 2020 1:13 pm

The inhumane conditions in which displaced civilians are living and a health care system that is almost entirely in ruin increase the risk of the spread of the pandemic in northwestern Syria, which threatens to have disastrous consequences

While the violence and clashes in northwestern Syria’s Idlib region have been de-escalating since a cease-fire brokered by Turkey and Russia took effect last month, civilians in the region now face the fresh risk of a new humanitarian crisis due to the coronavirus pandemic. As the pandemic spreads to nearly all parts of the world, the danger is extremely high in conflict-ravaged countries like Syria where living conditions and health care systems seriously suffer. Following the cease-fire, Syria witnessed the lowest monthly civilian death toll in March during its nine-year-long civil war. However, the hope has given way to despair in a short period of time as the pandemic continues to threaten the country, dragging it into a further humanitarian catastrophe.

Rami Abdulrahman, the founder and the director of the Britain-based Syrian Observatory for Human Rights, told Daily Sabah that the current situation in northwestern Syria is dire on all fronts.

Underlining that the areas under the control of opposition factions are suffering from severe shortages in medical equipment, services and medical crews, he said these problems have hindered any efforts to stop the spread of coronavirus.

Obaida Hitto, the Syria correspondent for TRT World, said that humanitarian conditions have not changed much since the cease-fire despite the de-escalation of violence.

“What has improved is the fact that people are not being displaced and not running away from bombardment anymore,” he said.

Both underlined that the risk of a coronavirus outbreak in the region is very high, and its possible consequences would be a disaster, considering the lack of health care services, infrastructure and terrible living conditions.

“Let me give you an example: 50 medical centers and private clinics have been put out of service due to deliberate bombardment by Russian and regime jets since April 2019, of which 11 hospitals and health centers were destroyed in January 2020 alone and four in February 2020; the number of medical facilities that have been completely destroyed rose to 22. So, we are talking about a health service sector that is almost entirely in ruins and has no capacity to cope with normal cases, let alone a global pandemic such as coronavirus that is crippling advanced health systems such as those of Europe, U.S. and so on,” Abdulrahman explained.

He also said that the lack of capacity in the existing health facilities to deal with a possible coronavirus outbreak. According to statistics shared by Abdulrahman, the Idlib region now has some 201 intensive care beds with only 95 ventilators, and the overall number of hospital beds currently stands at only 3,065, all of which are used for ordinary medical cases; and all the medical equipment is used to treat ordinary cases.

“This means there is no capacity whatsoever at these medical facilities to treat coronavirus patients if and when the virus starts spreading. We are staring into the abyss, unprepared and powerless in the face of a pandemic, which if it hits northwestern Syria, we are going to see a tragic catastrophe of epic proportions. The health care sector in northwestern Syria is broken. Help is needed now,” he added.

As nearly 2 million people had to flee their homes by moving to relatively safer northern areas near the Turkish border due to attacks by the Russia-backed Assad regime in Idlib, those who are living in camps made of tents are probably in the worst condition among the displaced population.

“In some cases, 40 people are living in a single tent. People are living in groups of tents on the sides of roads, in valleys and at the tops of mountains, basically, everywhere they can find a place to build a tent on. This situation will get worse as time goes on, because resources in the area are going to run out. People don’t have access to running water and electricity. This is going to have terrible consequences, especially if the situation persists through the spring and summer. We have also seen some cases of other diseases because of these camps’ lack of proper sanitation and sewer,” he said.

Underlining the limited options for people who need medical care, Hitto added that a possible COVID-19 outbreak in the region could be detrimental.

“The humanitarian situation in northwestern Syria is already bad and getting worse by the hour, and if the coronavirus starts spreading among the population in this area, where there are overcrowded, makeshift refugee camps with appalling infrastructures and poor sewer systems and sanitization, then we are talking about an apocalyptic and catastrophic scenario, where we are faced with a pandemic that is spiraling out of control,” Abdulrahman said.

Turkey's military backs some Syrian opposition groups in the northwestern Idlib region where it ramped up its deployments earlier this year. Fighting has subsided over the past month since Ankara agreed on a cease-fire with Moscow, which backs Syrian regime forces.

Since April 2018, attacks on the last opposition stronghold intensified, causing new waves of refugees including more than a million people to move toward the Turkish border, putting the country, which already hosts 3.7 million Syrian refugees, into a difficult position.

Currently, Turkish soldiers are stationed in the region to protect the local population and to carry out counterterrorism groups. Still, despite the military escalation, Ankara has also been putting forth efforts to keep diplomatic channels active with Russia in hope of finding a political solution, urging the country to uphold the peace agreements and ensure an immediate cease-fire.

Another issue related to COVID-19 is the presence of the disease in regime-controlled areas.

So far, 19 cases of the COVID-19 disease have been reported by the regime, but it is believed that the actual number could be much higher.

The U.N. made a call to all countries dealing with internal conflicts to halt hostilities and focus on the global fight against the pandemic, underlining the potential problems that could arise in these countries. U.N. Secretary-General Antonio Guterres last week renewed his call for a global cease-fire, urging all parties to the conflict to lay down arms and allow war-torn nations to combat the coronavirus pandemic.

"The worst is yet to come," Guterres said, referring to countries beset with fighting like Syria, Libya and Yemen.

Saying that there is fluid movement between the regime- and opposition-controlled areas, Hitto added the lack of transparency from the regime about the number of cases, deaths, locations and other details poses an obstacle to developing and organizing plans to deal with this threat.

In its latest report on northwestern Syria published last week, the U.N. Office for the Coordination of Humanitarian Affairs (OCHA) stated that despite the decrease in hostilities in the region due to the March 6 cease-fire, humanitarian needs for nearly 4 million people remain severe.

The report also said that millions of people are at high risk of COVID-19 adding that a preparedness and response plan identifies a need for $30 million to address needs.

“Testing for COVID-19 in northwest Syria has begun with no confirmed cases,” it added.

Najat Rochdi, the senior humanitarian adviser to the U.N.'s top Syria envoy, said last week that humanitarian assistance has never been more critical for the entire country, adding that all Syrians, and all those who provide assistance, are at risk.

The delivery and distribution of international aid is another issue. The international community until now has been unable to take the necessary steps and measures to provide support to people in the areas where survival is most at risk, Hitto said, adding that there is a big debate about where humanitarian aid should be delivered and how and who should be delivering it.

“The regime is saying all of the U.N.’s humanitarian aid is going and should be going through Damascus and Damascus has the capacity to deliver humanitarian aid provided by the U.N. and its affiliates, even in opposition-controlled areas. But at the same time, we see that over the years there have been different kinds of reports the regime has been abusing the aid it receives from the U.N. and its affiliates and the lack of transparency in the distribution. So, the international community needs to ensure that the regime does not monopolize the distribution of humanitarian aid,” he explained.

Hitto is not personally optimistic about what could develop there in terms of humanitarian conditions.

“As long as the cease-fire holds, then we can see the possibility of some kind of international response to the situation in northwestern Syria. But we haven't seen that momentum developed yet because the international community is so preoccupied with trying to prevent the spread of COVID(-19) everywhere else in the world. The situation in the region could get really bad and deteriorate very fast if the proper measures are not taken.”