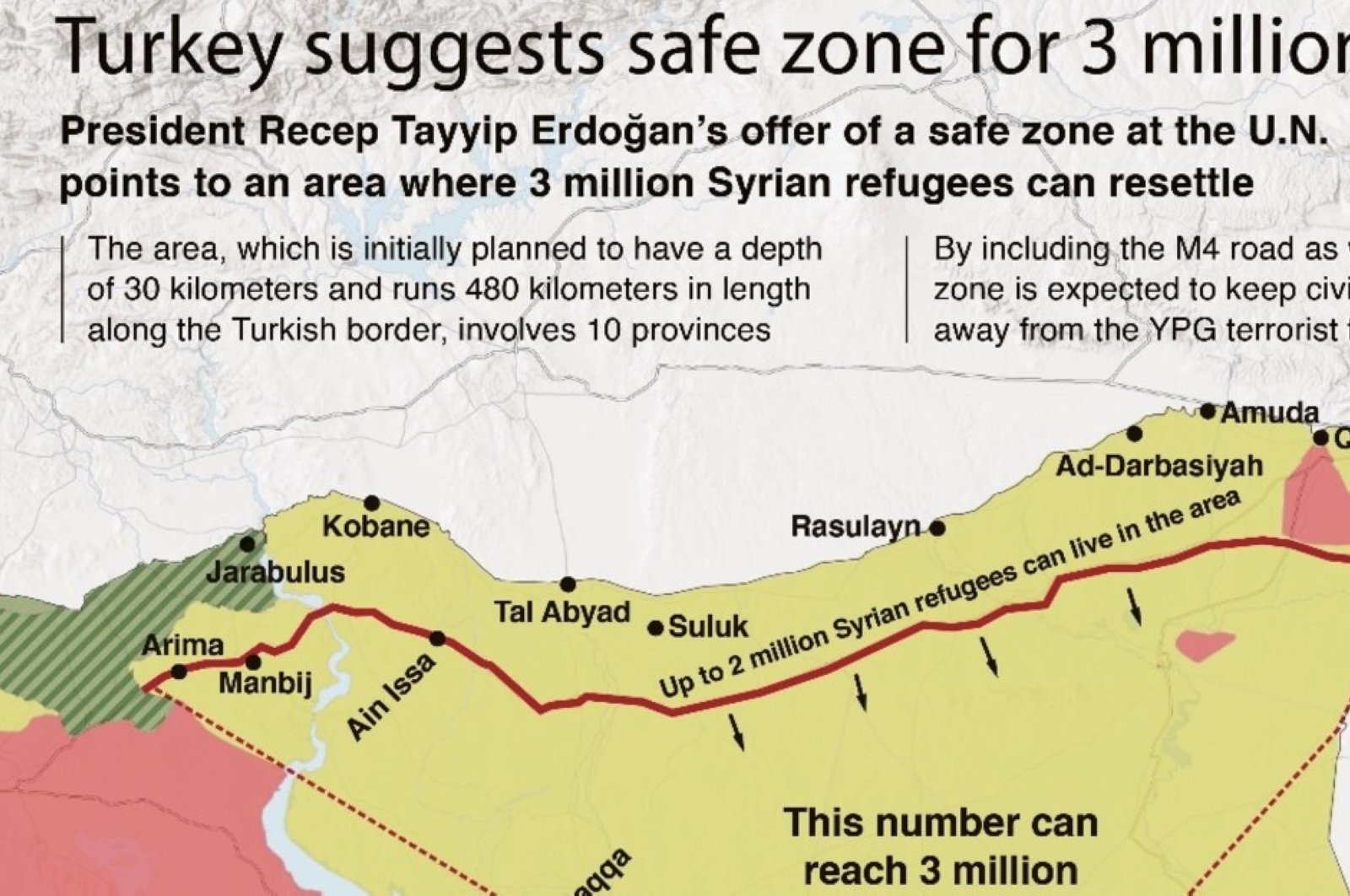 A map shows Turkey's safe zone in northern Syria, projected to be home to millions of Syrian refugees that had to leave their homes due to the nine-year long conflict in the country.
by DAILY SABAH Mar 24, 2020 3:26 pm
Edited By Dilara Aslan

It remains to be seen whether the European Union will fulfill its promise to Turkey to share in the burden of helping millions of Syrian refugees and ending the bloodshed from the decadelong civil war. With the coronavirus pandemic on the forefront of the worldwide agenda, how long can Turkey go on shouldering the full burden of the refugee problem. Evidently, Europe once again finds itself in a dilemma, trying to find a line between two NATO members, Turkey and Greece. While Turkey is trying to find a permanent solution and support for refugees, Greece is trying to keep them out.

There is little doubt that the EU and Greece do not want another migrant crisis. EU leaders made that clear enough this month when they traveled to Greece to display solidarity with that government's harsh protocols to block asylum-seekers and other migrants from entering its borders.

The EU again faces a moral clash with its avowed values of protecting human rights, individual dignity and the right to seek asylum under international law.

Last week marked the ninth anniversary of the start of the Syrian civil war on March 15, 2011. Syria, which has seen innumerable cease-fires come and go, has been in silence since bombs stopped when Turkey and Russia reached a cease-fire agreement on March 6 and curbed, for now, a new refugee wave that would have come to Turkey from northwestern Syria’s Idlib, which would have passed onto Europe.

However, the latest cease-fire did not come under easy conditions for Turkey. The nation has lost 34 soldiers during a Russian-backed Bashar Assad regime offensive on Feb. 27 while it also had losses during the previous operations in Syria, including operations Euphrates Shield, Olive Branch and Peace Spring.

Tensions between Turkey and the Assad regime flared as fierce fighting in northwestern Syria killed a large number of Turkish soldiers and threatened to send a new wave of refugees over Turkey’s southern frontier, in addition to the 1 million that had already been displaced due to assaults by the regime on Idlib since December.

The Turkish soldiers were stationed to protect local civilians, whose safety had been guaranteed as part of a deal with Russia which was ratified by Turkey and Russia on March 6 this year, after countless violations by the Assad regime.

In response to the international community’s silence toward the regime’s attacks on Turkish soldiers and Syrian civilians, Turkey announced last month that it would no longer try to stop refugees from reaching Europe via land while continuing to ban dangerous boat crossings. That action threatens a repeat of the European refugee crisis in 2015 that helped fuel populism and anti-EU sentiment across the bloc.

Amid the intensive stolidity of Europe throughout the years, Turkey has taken the initiative to stop this human tragedy once more. Last week, President Recep Tayyip Erdoğan held a videoconference with his French counterpart Emmanuel Macron, German Chancellor Angela Merkel and U.K. Prime Minister Boris Johnson.

According to a statement from the Turkish presidency, the leaders discussed the Syrian crisis, Idlib and the influx of refugees. The videoconference came after the president visited Brussels a week earlier to discuss the migration crisis, yet neither the videoconference nor the meeting brought any concrete policies toward migrants in the EU.

Yet, around 10,000 migrants have been waiting for more than a month in areas near the Turkish-Greek border despite the Greek security forces’ harsh treatment and poor weather conditions.

When migrants and asylum-seekers started to flood toward the border, Greece decided to suspend asylum applications for a month, constituting a violation of human rights. U.N. agencies and Turkey have frequently voiced that a solution is needed for the desperate people waiting at Europe’s door.

On the one hand, Turkey has been hosting nearly 4 million Syrian refugees within its borders for the past nine years while it also pursues its costly fight against terrorist organizations including Daesh, the PKK and the PKK's Syrian affiliate, the YPG, in order to enable the safe return of Syrians to their homes.

It is difficult to say that the EU has proposed a solution that can be taken seriously addressing humanitarian, political and military aspects of the situation in Syria.

Therefore, Ankara has repeatedly complained that Europe has failed to keep its promises under a 2016 EU-Turkey refugee deal to help migrants and stem further migrant waves.

In fact, Ankara had often warned the international community and regional countries in many platforms that a new offensive could trigger an unbearable refugee wave toward the West. Turkey called on the EU and U.N. to fulfill the promises they made to Turkey concerning Syrian refugees, during a high-level meeting on Syria within the scope of the 74th session of the U.N. General Assembly in New York City last year, warning of a new refugee flow from the northwest region of the country.

Stating that the Brussels Conference on the humanitarian crisis in Syria, co-chaired by the EU and the U.N., was organized last year in March, Turkey also pointed out that the situation of the Syrians had become worse since then.

Turkey has spent $40 billion for Syrians so far

Ankara has spent nearly $40 billion so far for refugees, while the promises made to Turkey lagged far behind the spending Turkey has made. Ankara and Brussels signed an agreement in 2016 to find a solution to the influx of refugees heading to the EU. According to the deal, Turkey was promised a total of 6 billion euros ($6.6 billion) in financial aid, which was initially designed to be given to the country in two stages to be used by the Turkish government to finance projects for Syrian refugees.

Visa-free travel for Turkish citizens was also promised in the agreement. Lastly, the customs union was also to be updated in accordance with the deal. In exchange for these promises, Turkey took the responsibility of discouraging irregular migration through the Aegean Sea by taking stricter measures against human traffickers and improving the conditions of the approximately 4 million Syrians living in Turkey. Although the first stage of the funding was provided to Turkey, based on the commission's progress report on migration, the EU failed to provide the rest of the funding and did not fulfill its other promises within the given time frames. Likewise, negotiations for updating the customs union have yet to start, despite the deal stating that they should be complete by the end of 2016.

Europe remains idle for a safe zone call for Syrians

So far, almost 400,000 Syrians returned from Turkey to areas in Syria secured as a result of Turkey's successful military operations. Turkey carried out two cross-border operations west of the Euphrates River, Operation Euphrates Shield launched in August 2016 and Operation Olive Branch in January 2018, to drive out terrorist groups, including the YPG and Daesh, from its borders.

In spite of that, the European partners and interlocutors still remain idle to support Turkey’s call to create a safe zone for Syrians.

Turkey intended to initially establish a peace corridor with a depth of 30 kilometers (18.64 miles) and a length of 480 kilometers (298 miles) and enable the settlement of up to 2 million Syrians. Turkey also endorsed that the safe zone formula is the most practical solution for Syrian refugees to return home. However, European diplomats did not put forth a feasible plan for 10 years.

European countries, which have at most accepted 1 million refugees since the Syrian civil war erupted, are even seeking ways to change their laws of asylum in order not to avoid accepting other refugees.

Today, amid the fight against the new coronavirus, it is less likely to expect encouraging promises from Europe to end this humanitarian tragedy if we think of the pre-coronavirus days of the world. However, this cannot change the fact that the EU still owes a huge cost to Turkey which has sacrificed all its capacities to keep humanitarian values alive for all.