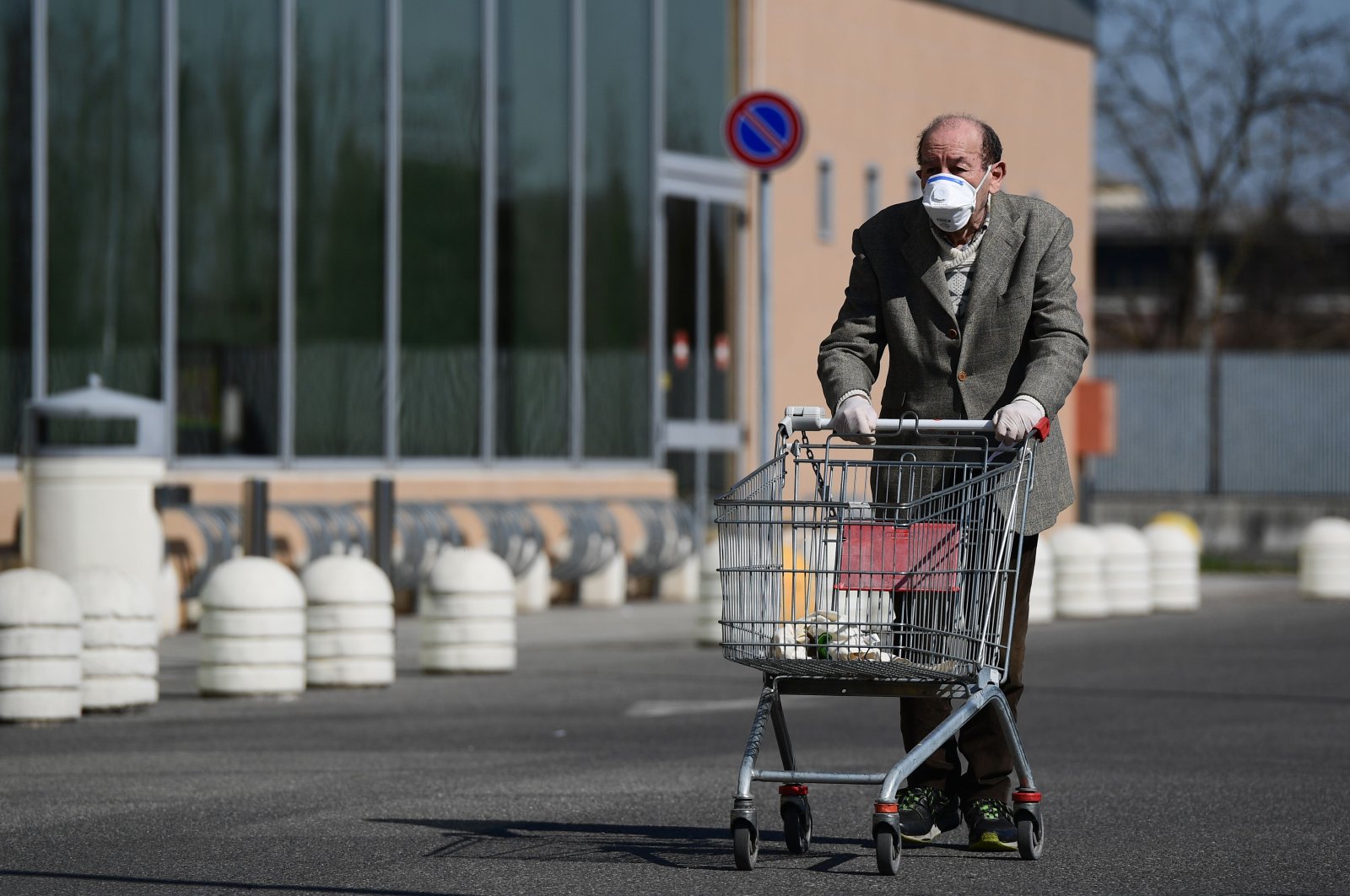 An elderly man wearing a protective mask pushes his cart as he arrives to shop at a supermarket in Codogno, southeast of Milan, Wednesday, March 11, 2020. (AFP)
by DAILY SABAH Mar 20, 2020 2:42 pm
Edited By Şeyma Nazlı Gürbüz

As the pandemic spreads across the globe, European leaders continue to produce indifferent statements, leading to unease rather than the crucial trust needed in times of crisis

Having failed to take the necessary preventive measures to slow the spread of the coronavirus, European leaders' statements have turned the already difficult process into a deadlock by fueling panic instead of ensuring security.

The recent statements of various leaders have used one sentence over and over: "We are only at the beginning of this crisis." These simple but clear words, although probably stating a fact, fail in properly fostering the trust people need during crises. It also creates the image that the things that have happened so far, the deaths, suffering, lockdowns and socioeconomic devastations, are only the tip of the iceberg and that the worse is yet to come.

The latest of such a speech came on Friday from French President Emmanuel Macron.

"We are at the start of this crisis. We have taken exceptional measures to absorb this first wave, but we've started a race against the virus," Macron said at the start of a crisis meeting at the Interior Ministry. Despite the truth of his words, the lack of strong leadership can be felt in every syllable he spoke.

Crises communication theories determine three crucial tactics to properly handle an emergency properly: be quick, accurate and consistent. Then, they divide the process into three steps: pre-crises, crises response and post-crises. European leaders' struggle for a proper communication strategy started during the pre-crises period when they overlooked the scale of the problem and postponed necessary measures. This led to an uncontrollable situation.

In the pre-crises period, according to the theories, the leaders should have rolled up their sleeves to prevent the actual crisis, which required being prepared and providing training if necessary. Europe failed at this as a continent.

Criticized for his late response, the prime minister of Spain, the country most affected by COVID-19 after Italy, Pedro Sanchez, defended himself during the first parliamentary speech after the initial outbreak by saying that they took the measures as soon as they became obligatory. Ironically underlining the importance of timing during these times, Sanchez, in accordance with European leaders' tradition, also underlined that "the worse is yet to come."

"This (the worst scenario) will take place when many infected people are hospitalized," he added.

When it comes to actual crises, the academy underlines the importance of having a proper response from leadership. Although the general perspective of "good" leadership is to display competence, humility and integrity, for many pundits, actual good leadership reveals itself when challenged with a crisis. At this point, a leader is expected to urge people not to panic, encourage them to face the challenges with determination, courage and unity, while providing a direction for them to follow. Constantly emphasizing how full health facilities are and the outbreak's burden on the states does little to comfort the people.

Recently, The Guardian reported that Public Health England (PHE) had an evaluation for the crisis, stating that the effects of the virus will last until next spring and in the meantime, 80% of U.K.'s society would be infected, while 7.9 million people needing hospitalization.

Similarly, top British physician Patrick Vallance said thousands will be killed by COVID-19, and if the crisis ends with the deaths of 20,000 or less, that would be a "good result."

The prime minister of the country, Boris Johnson, however, was blunter in his speeches.

“I must level with you, the British public. Many more families are going to lose their loved ones before their time,” he said last week.

According to Eliot Hoff, head of APCO Worldwide’s Global Crisis Practice, the leaders' poor communication has led to fear and the spread of misinformation among the people and has made the crisis worse than it is.

German Chancellor Angela Merkel also said 60-70% of the German population will be affected by the virus, while Dutch Prime Minister Mark Rutte expressed that it is a "reality" that the majority of the people will be infected "soon."

Among the careless announcements of collective deaths, there is also a merciless reference to the elderly and people with underlying conditions, implying that they might be the first ones to die of the disease.

“If anything is going to hurt the world, it is moral decay. And not taking the death of the elderly or senior citizens as a serious issue is moral decay,” said World Health Organization (WHO) Director-General Tedros Adhanom Ghebreyesus, addressing the leaders' cold-blooded remarks, referring to vulnerable groups as expendable.

Hoff states that although institutions such as the WHO mostly pursue a good communication strategy in these types of situations and provide the necessary information, usually the problem comes from the elected officials who are mostly "lost in translation."

Still, the statements caused panic in European societies, leading people to rush into markets and buy whatever they can, forming long queues. This panic-buying depleted stock for some products and many people, mostly the elderly and ill, suffered for days until the new stock was provided.

European leaders are not alone in their failure in providing good communication with people in a time of crisis as U.S. President Donald Trump has been failing in almost every aspect of successful crisis management with his indifferent speeches.

According to crisis communication theories, there is one major point that all leaders should avoid in times of crisis: never stick your head in the sand. The strategy that Trump followed, however, was exactly that in the beginning of the crises as he ignored even the existence of the problem.

He claimed that the virus will disappear like a “miracle” and added that “warm weather will kill the virus.” His speech also reflected on the U.S. policy of the issue, as the country failed to take necessary measures while letting the virus spread like wildfire. He then referred to the virus as the "China virus" and provided a racist perspective on the issue, blaming China for the presence of the pandemic. The crisis communication theories refer to Trump's reaction as scapegoating, one of the two methods of denial that "bad management" often uses in a crisis.

During the last stage of the crisis period, post-crisis, the academy urges leaders to prepare better for possible upcoming similar scenarios and fulfill the promises made during the crisis period. However, the failure of the leaders so far, acting carelessly without consideration of the not only local but global impact of their words, makes it difficult for many to trust in the future.