Expectations and choices for Erdoğan, Putin at Sochi Summit 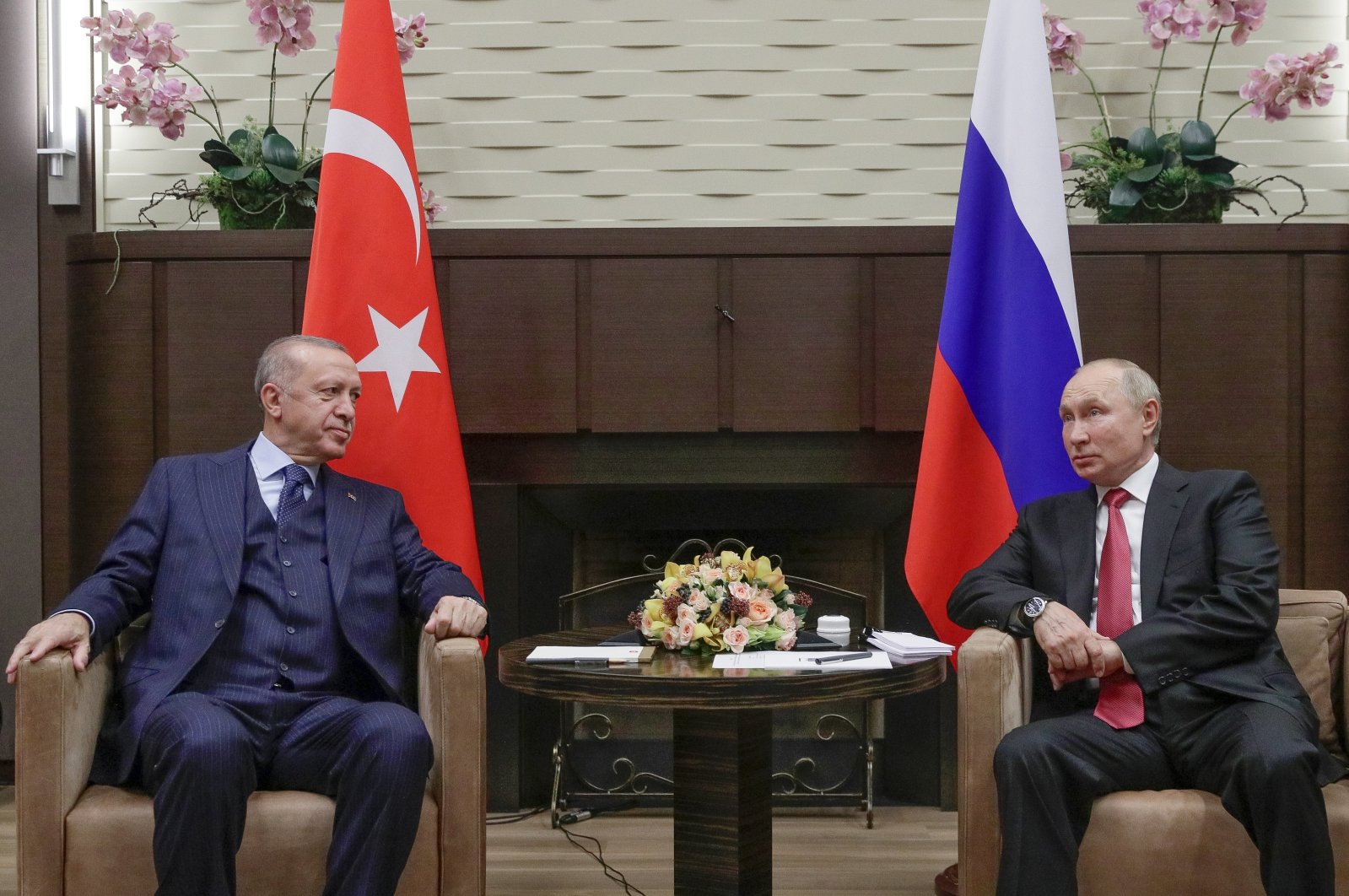 President Recep Tayyip Erdoğan and Russian President Vladimir Putin talk to each other during their meeting in the Bocharov Ruchei residence in the Black Sea resort of Sochi, Russia, Wednesday, Sept. 29, 2021. (Kremlin Pool Photo via AP)
by Nur Özkan Erbay Sep 23, 2021 1:59 pm
RECOMMENDED

Next week, on Sept. 29, President Recep Tayyip Erdoğan will pay a visit to Sochi to deliver an address at a bilateral summit at the invitation of Russian President Vladimir Putin.

One reason that makes this visit more important than others is the situation in Syria's Idlib today. The Kremlin has already confirmed that, compared to other visits, this visit will focus on much more extensive and critical topics.

“It will be the most comprehensive agenda since bilateral relations started. These relations are multifaceted and the leaders have always something to talk about within this scope,” Peskov told journalists.

Although all world capitals, especially Ankara, seem to be focused on the issue of Afghanistan, the lack of a political solution in Syria, with the ongoing terrorist threat and migration crisis, will be the most critical issue on the table in Sochi.

In Idlib, recent attacks targeting Turkish soldiers are being carefully monitored by Ankara. Although there has been a relative calm after the agreement reached with Russia on March 5, 2020, attacks on civilians by the terrorist organizations al-Qaida and Daesh as well as PKK's Syrian branch YPG continue. There has been a recent increase in harassment targeting observation posts created by Turkey on the M4 highway in Idlib. Three Turkish soldiers were killed in recent attacks.

On the other hand, the recent airstrikes by Russian and Syrian aircraft based in Idlib also oblige Ankara to review the existing agreements. This is why, during the Erdoğan-Putin meeting, Ankara will be seeking answers to many questions from Moscow.

The agreement between the two countries was signed in Sochi on Sept. 17, 2018, according to which a de-escalation zone would be established in Idlib. This agreement envisaged a withdrawal from the 15-20-kilometer (9-12 miles) deep and 250-kilometer long disarmament strip. After that, the Syrian army postponed the Idlib operation, which it had been planning for some time. However, since then, it has also been observed that Moscow has not fulfilled the requirements of the agreement in the joint fight against the terrorist organizations appearing on ground and target Turkey while continuing their criticism of Turkey. In addition, it was seen that Moscow has not increased pressure on Bashar Assad since then.

At every turn, Turkey sends a message to Moscow saying, “We comply with the agreements, we expect Moscow to fulfill the same responsibilities.” At the same time, it is concerning for Turkey that the Syrian regime and Russia continue to conduct airstrikes in the Idlib region. Whether Russia uses these attacks as a deterrent factor against Turkey, and whether it really will comply with the agreement's commitments from now on, will be one of the important outcomes of the summit in Sochi for Ankara.

In other words, Erdoğan will ask Putin in Sochi for a clear answer about his intentions regarding compliance with the terms of the agreement. While Turkey's struggle with all terrorist organizations, especially al-Qaida, Daesh and the YPG/PKK continues resolutely, it will also signal its objection to the increase in attacks against Turkish troops.

Turkey also takes into account the fact that the presence of Daesh and al-Qaida in Afghanistan could have a domino effect in Syria. This suggests the need for Moscow to be even more closely tied to its agreements with Ankara. It also raises questions about how effective Moscow is on the ground, given the U.S. airstrike targeting a senior al-Qaida figure in Idlib in the previous days.

Furthermore, despite the agreements reached between Moscow and Ankara over the past three years, the biggest risk that may arise in the face of deteriorating security and stability in Idlib is a new wave of migration. Turkey will not tolerate a new wave of migration, as President Erdoğan expressed in his speech at the United Nations General Assembly (UNGA) on Tuesday. He also underlined that Turkey is fighting against terrorist organizations while hosting 4 million Syrians and urged the U.N. Security Council to show a strong will for a political solution in Syria.

"Decoupling between terrorist organizations in the region, using them as subcontractors is not accepted," he added. It was clear that the message was intended for the United States and Russia.

Erdoğan also emphasized that the world is facing the possibility of a new influx of migrants from Afghanistan, and stressed that Turkey no longer has the ability or tolerance to meet new waves of irregular migration.

Despite all this, Turkey, on the one hand, continues to facilitate the life of the people in Syria and heal their wounds. However, Turkey’s capabilities are limited and it cannot lift this burden alone. Erdoğan will also convey to Putin how important Turkey's military presence in the region is for maintaining stability and preventing new attacks that will trigger a new wave of migration.

On the other hand, it is clear that Russia will continue to recognize Assad, whom it hosted at the Kremlin just last week, as the legitimate representative of the Syrian people and back him politically, economically and militarily. However, in the upcoming period, Moscow will need to increase its sanctions and pressure on Assad in order to reach an agreement with Turkey. Although Ankara might conduct backdoor communication in necessary areas with the regime, it is also a fact that it does not recognize the Assad regime as a legitimate representative of the Syrian people. Whether these contacts will move forward depends on the answers and decision of Moscow, which is the political mentor of Assad.

The Sochi summit, which will take place in the shadow of all these questions, will be much more meaningful for Moscow in terms of the answers it gives to Turkey. It is also highly critical in terms of Russia’s willingness to choose a genuine and reliable partner to find sustainable solutions and maintaining stability in Syria for all parties. When taking into account the new alliances forming in the Indo-Pacific, Anglo-Atlantic, Eurasia, and the Eastern Mediterranean, this Sochi summit takes on an even more important role determined by the choices Putin makes.