Experts: Turkey, US can cooperate in Syria under Biden if only Washington shifts YPG policy 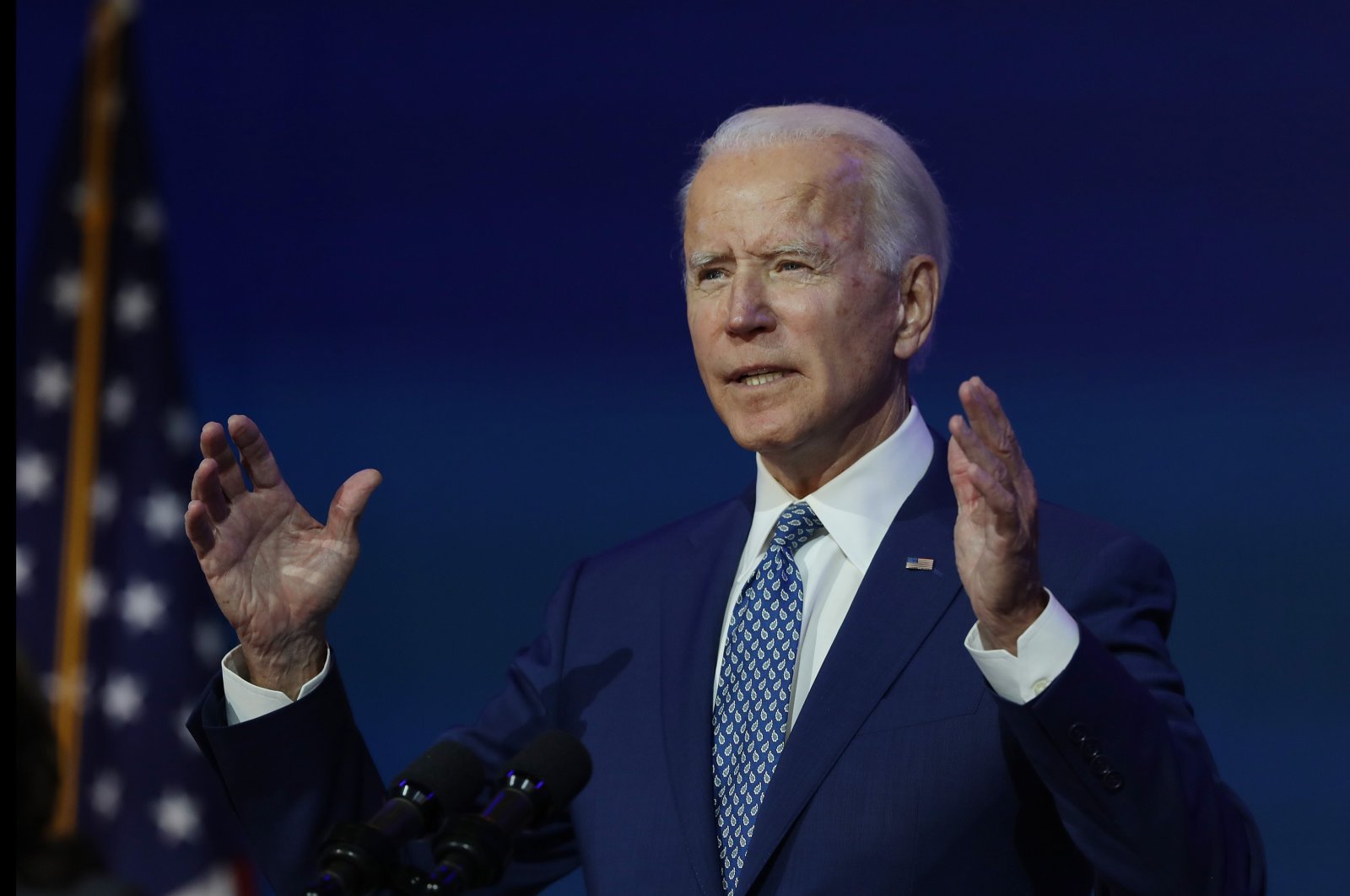 President-elect Joe Biden speaks to the media after receiving a briefing from the transition COVID-19 advisory board at the Queen Theater in Wilmington, Delaware, U.S., Nov. 9, 2020. (AFP Photo)
by Şeyma Nazlı Gürbüz - Dilara Aslan
Nov 10, 2020 3:22 pm

Despite existing fault lines in bilateral relations, Turkey and the U.S. under President-elect Joe Biden may be able to collaborate in the region if Washington stops insisting on cooperation with terrorist organizations in Syria, experts say

Over the last week, there has been a serious change in the U.S. administration as Democratic candidate Joe Biden's victory became more certain and key government figures were replaced, including Secretary of Defense Mark Esper and the special envoy for Syria, James Jeffrey. The changes signal a fresh start for the administration but also raise questions about the country's diplomacy, particularly its policies in Syria, where the U.S.' insistence to support terrorists ultimately led it to part with its NATO ally, Turkey.

However, according to experts a change in government will not harm the bilateral ties between the countries regardless, as has been proven in the past.

Turkey would be on the front line if the country were not strong in the field and at the negotiating table in Syria, Turkish Foreign Minister Mevlüt Çavuşoğlu said Monday, speaking at the 12th Ambassadors' Conference held in the capital Ankara.

Changes in the U.S.' foreign policy, especially in Syria are expected after U.S. President Donald Trump on Monday announced on Twitter that he had fired Esper. "Mark Esper has been terminated. I would like to thank him for his service," Trump said, announcing his replacement Christopher Miller, the current head of the National Counterterrorism Center.

On the same day U.S. Secretary of State Mike Pompeo announced that Jeffrey would be stepping down from his posts as U.S. special representative for Syria and as special envoy for the global coalition to defeat Daesh.

“Until Joe Biden is inaugurated as president on Jan. 20, those changes could have an effect. It really depends on what the Trump administration plans on doing in terms of foreign policy, foreign actions while there is this transition time,” Obaida Hitto, TRT World’s Syria correspondent, said. However, Hitto also reiterated that since Trump has contested the results of the elections and is getting ready for a legal battle, it is still not clear what the exact outcome of the U.S. polls will be.

President Recep Tayyip Erdoğan will likely be unable to influence U.S. policy with a simple phone call to Biden once he takes office, as he had occasionally done with incumbent President Donald Trump.

The U.S. president-elect is not looking to push Turkey away but rather to reengage the geographically strategic, militarily powerful NATO ally on tougher terms.

Multiple issues are straining bilateral ties between the NATO allies, with Syria maintaining its position as the most complex due to contrasting interests.

As the Biden administration settles into office, the Syrian civil war will mark a decade in March 2021. With no end in sight to the ongoing conflict, the country is still divided between regime-controlled areas, the northwest occupied by the resisting opposition forces and the northeast dominated by terrorist groups.

Speaking to Daily Sabah, Hüseyin Alptekin, a researcher at the Foundation for Political, Economic and Social Research (SETA), stated that the most important issue in Turkey-U.S. relations is whether Biden will insist on the YPG corridor in Syria that was initiated during the Obama administration when Biden was vice president. He pointed out that such a move would be met with resistance from Turkey and could eventually cause a break in ties.

“However, if there is no insistence on the PYD, there is no reason why the Middle East policies of Turkey and Biden should not correspond with one another,” he added.

Turkey’s Presidential Spokesperson Ibrahim Kalın said last week the country would work with any U.S. president but would continue to press for the U.S. to abandon support for militant groups in Syria.

“Any effort by the Biden administration to engage the PKK/YPG would mount pressure on Turkey-U.S. relations. Likewise, Biden’s potential steps to meddle in Turkey’s internal affairs would be viewed as a challenge against Turkish sovereignty and independence and could undermine the bilateral relationship.” wrote Yahya Bostan in a column for Daily Sabah.

While underlining that one cannot support one terrorist group to fight another, Turkey conducted its own counterterrorism operations, over the course of which it has managed to remove a significant number of terrorists from the region.

Yet the personal bond between Trump and Erdoğan – something the White House chief only enjoyed with a small group of other strong-willed world leaders – helped mitigate much of the damage.

Trump and Erdoğan's personal relationship was well documented over the course of the former's presidency, suggesting the two were key actors in overcoming bilateral problems between the countries. Trump expressed on multiple occasions that he and Erdoğan were getting along well, while Erdoğan mentioned more than once that relations were better with the Trump administration than with his predecessor's.

However, many pundits have pointed out the two-headedness of the Trump administration in its foreign policy, when Trump acted per his own policies which were later challenged by other U.S. institutions, including the Pentagon and the U.S. secretary of state.

For instance, following Trump's decision to withdraw U.S. troops from Syria and announcing that Ankara is preparing for an operation in 2019, he was met with an onslaught of protests, particularly from Congress and the Pentagon, causing the president to step back from his initial decision.

When it comes to Biden, on the other hand, his remarks on the issue before his election already suggest that there will be a change in how things are done.

Biden openly suggested that the YPG should be supported in Syria while questioning the presence of NATO missiles in Turkey’s Incirlik Air Base.

In Hitto’s opinion, during the Biden era, the U.S. support for the YPG will increase. He also stated that for a political solution in Syria, Biden is likely to gather an international group, including the Assad regime, in the upcoming period.

Julien Barnes-Dacey, director of the Middle East and North Africa program at the European Council on Foreign Relations (ECFR), wrote last week that Biden appears willing to keep a small military presence in northeastern Syria with greater support for the YPG-dominated SDF forces while maintaining sanctions on Syria.

“It is not very clear what the Biden administration’s Syria policy is going to be like since they have not been very vocal about it,” he said.

Still, according to Hitto, Biden is far from unprepared when it comes to his upcoming foreign policy. He has a huge team for diplomacy alone, constituting about 200 people divided into 20 different working groups.

According to Hitto, the U.S. is well aware that the PKK is a terrorist organization.

Now, with Trump on the way out, “Erdogan has a reason to be anxious,” Middle East Institute analyst Gönül Tol wrote in a research note.

“I don’t think the Biden administration will be as indulgent of Turkey in Syria and elsewhere,” added Sam Heller, an independent analyst on Syria.

Alptekin, however, said, “Biden’s election could be a turning point for the Middle East,” adding that the newly elected president might not continue the unconditional and unlimited support Trump gave Israel, the United Arab Emirates (UAE) and Saudi Arabia and could speak out against the increasing Russian influence in the region.

“The Syrian, Libyan and Nagorno-Karabakh crises have shown that Turkey is a regional power that can balance Russia’s expansion in the region. If Biden acts accordingly, he can have the chance to work with a strong regional actor instead of terrorist organizations,” Alptekin said.

Russia intervened directly in Syria in late 2015 allegedly at the official request of the Syrian regime. Moscow has established a major presence in Syria, where its air force and military bases across the country have allowed dictator Bashar Assad in recent years to defeat opposition who rose up against his authoritarian rule. Similarly, Russia supports putschist Gen. Khalifa Haftar in Libya against the legitimate Libyan government, another front where Ankara and Moscow's sides collide.