How Israel's Mossad links with Riyadh, FETÖ to target Turkey 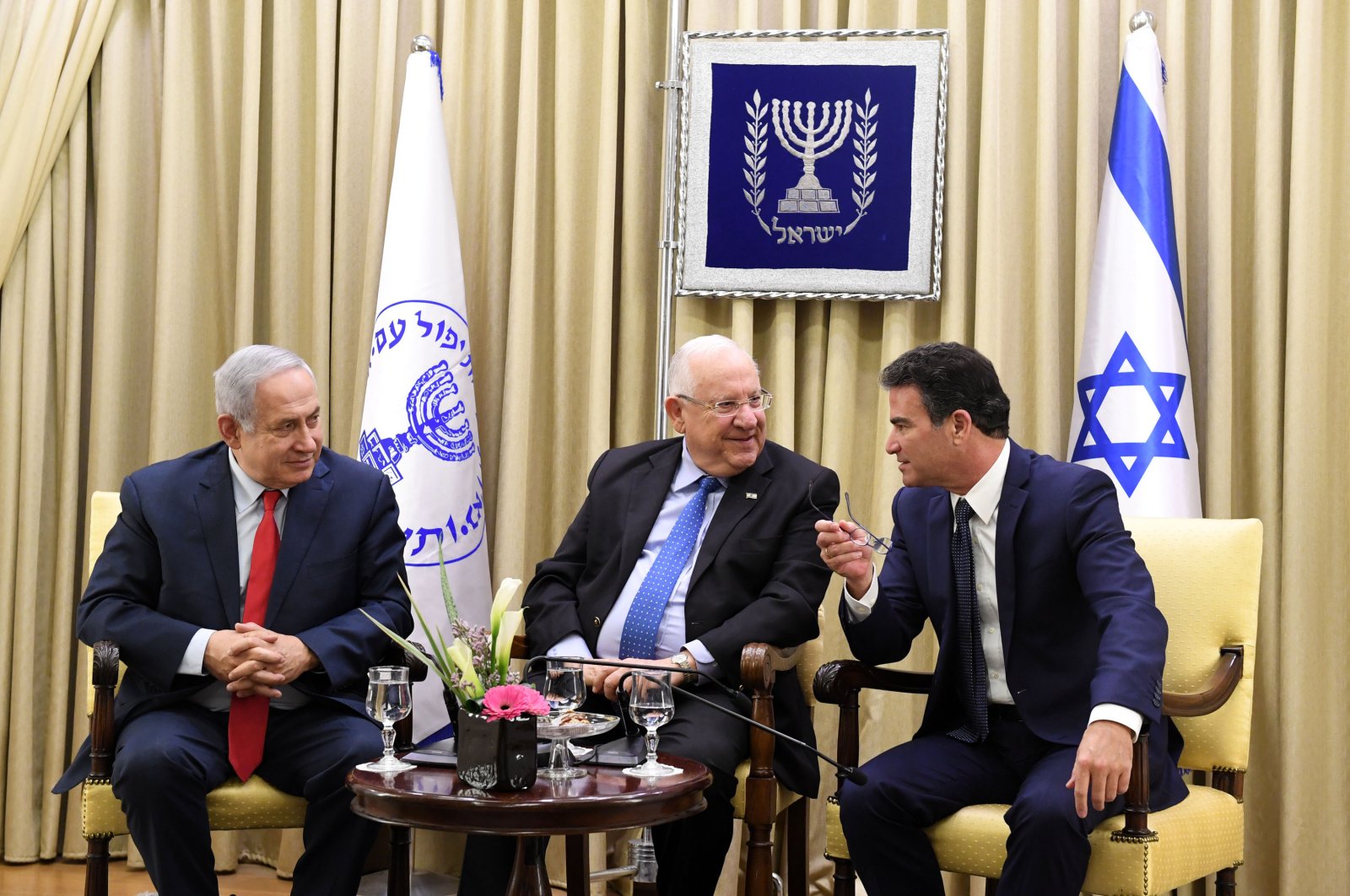 How do they operate against Turkey and Turkish intelligence by using journalist cover-ups? How does Israel operate in this chain? Daily Sabah has accessed exclusive details on the operations of Israeli intelligence in Turkey and the Middle East carried out through media and journalist spies

The details of the dark intelligence and terror network created by Israel, Saudi Arabia and the Gülenist Terror Group (FETÖ) using the media have been uncovered.

The operations carried out through the media in the past few years led by the alliance of Israel, Saudi Arabia the United Arab Emirates, Egypt and FETÖ, which is a terror and espionage structure, have come to light one by one.

Daily Sabah has accessed exclusive details on the operations of Israeli intelligence in Turkey and the Middle East carried out through media and journalist spies.

It is striking that the common targets of these operations are Turkey and its National Intelligence Agency (MİT). On March 18, a news article was published on Intellitimes.co.il, one of Israel’s operational media websites, with the title “Disclosure: The image of the Iran Quds Force’s Terror and Intelligence Branch in Turkey.” The photo of the article depicted Turkish territory, more than half of which was covered with Iranian flags.

Previously, the Daily Makor Rishon, known for its closeness to Israeli Prime Minister Benjamin Netanyahu, had used the following statements in the article by Pazit Rabin with the headline "Sultan and Soleimani," which showed Turkish intelligence head Hakan Fidan as a target: "Now that Qassem Soleimani is buried underground, it is time to focus on the conspiracies of his twin, Hakan Fidan."

While Rabin rejected the claims of threats toward Fidan in a statement he gave to Saudi-funded Independent Turkish writer Benan Kepsutlu on Jan. 30, he summarized his article’s main thesis as “Qassem Soleimani’s source of inspiration being Hakan Fidan’s ideas and (Former Prime Minister Ahmet) Davutoğlu’s New Ottoman ideology.”

In fact, trying to establish such an enforced link between the Turkish intelligence head and Iran is not only Israel’s doing. There is cooperation and a single voice in this matter financed by FETÖ, the United Arab Emirates and, from time to time, Riyadh.

In the past, FETÖ-member police officers and prosecutors tried to arrest thousands of people – including high-ranking politicians, bureaucrats, soldiers, businessmen, journalists and diplomats – in Turkey within the scope of the Selam-Tevhid case in 2010 on the charges of “carrying out spy activities for Iran.”

Following the 2012 attacks on Israeli diplomatic missions in India and Georgia, the Selam-Tevhid conspiracy case was expanded by Mossad through adding shared information to the file with the police service under the control of FETÖ, and the plotters attempted to include Fidan through intelligence provided by Israel to FETÖ.

Within this scope, it is no coincidence that the claims of the Selam-Tevhid conspiracy case launched by FETÖ and the perception operations on Fidan through media for 10 years overlap completely.

Moreover, many intelligence reports verify that FETÖ ensured its intelligence corporation with Israel through the Jewish diaspora in the U.S. and funded Haaretz, one of Israel’s leading political newspapers on the international stage, for anti-Turkey propaganda.

Unsurprisingly, the article “About Black Sites Turkey,” published in both English and German on Dec.11, 2018 on FETÖ’s Germany-based website Correctiv.org, included again baseless and unproven news on Turkish intelligence, and these allegations were published in Haaretz as headlines.

It is well known that Israel carries out its yearlong espionage operations without borders and rules through a series of agent apparatus and allied terrorist organizations in countries it targets.

Mossad’s activities are comprised of the use of illegal espionage software, illegal interrogations and assassinations. Some of this software enables remote access to communication applications that are widely used throughout the globe such as WhatsApp, while some enable the hacker to reach the content of all kinds of devices that connect to the internet that the targeted person uses.

Accordingly, one of these Israeli software programs, called Pegasus, was used intensively by Saudi intelligence to track the activities of Jamal Khashoggi in the U.S. and Turkey, a process which ended with Khashoggi being murdered. While Israel hid the fact that this software was used in the tracking of Khashoggi by its most powerful ally, the U.S., it continues to offer the software to the service of Gulf allies to harm the countries they target or eliminate opposition elements.

In fact, Israel also makes huge gains by selling espionage software to track the activities of enemies and opponents of the relevant countries through Israeli software companies that operate in affiliation with Israeli intelligence. Since the main database of this espionage software is found in Tel Aviv, Israel can follow the activities of these allies with the system they finance.

How does Israeli intelligence work?

Israeli intelligence establishes front companies in some Balkan and Central European countries, such as the B.D.C. company in Serbia, and prepares special websites through these companies, which in reality do not exist, while giving a place for the personal contact information of Mossad agents that are to coordinate intelligence activities under fake names.

Later, intermediaries that can establish communication between the targeted person and the Mossad personnel who speaks the language and knows the culture of the target person are hired under heavy costs. These people generally know they work for Israeli intelligence because they fulfill more than one task and sometimes these persons think they work for the front company without a doubt.

The intermediary Mossad subcontractors that travel to the country where the targeted person is located present themselves as businessmen, workers of the front company, representatives of a philanthropist or spirited defenders of an issue the target person has adopted. They transmit intelligence reports to Israeli intelligence with special software on their computers and they communicate with the connected secret agent via Skype, Viber or WhatApp.

The intermediary that gains the trust of the targeted person leisurely, sometimes in accordance with the operation’s aim, gifts the person a phone loaded with the espionage software or invites the person to Southeast Asian countries where security standards are low under the guise of a business trip.

These people who accept the offer enthusiastically, thinking they will obtain a significant gain from a trade activity or that they will receive a large donation for an nongovernmental program, encounter unpleasant situations in which they are interrogated, forcefully engaged or murdered by assassination teams in houses of Mossad or Israeli missions in these countries.

According to intelligence reports, the victims of the mentioned Israeli intelligence murderers and tortures were Iraqi chemist T.M.A.J., interrogated for five months in the woods in the Philippines’ capital Manila in 2017, and Philippine engineer F.A., killed in April, 21, 2018 in Malaysia.

The cover-up journalists play a key role in Israel’s intelligence operations. One of the prominent examples of this is Adi Lieberman.

A large-scaled protest was conducted by the supporters of former Iranian President Mahmoud Ahmadinejad’s reformist rival Mir Hossein Mousavi in the year 2009 when Ahmadinejad was re-elected as president. After the killing of Neda Agha Soltan by a sniper during the protest, which was later called the Green Movement, drew huge reaction, Israeli intelligence accelerated its operations against Iran.

Soltan’s fiancé Caspian Makan, who fled the country after being arrested by Iranian intelligence for giving interviews to the international press about the assassination, and Adi Liebermann, who was actually undercover for Mossad but seemed to be working as the correspondent for Israeli Channel 2, convinced Israeli President Simon Peres to meet up with Makan. The two met in 2010 with the companion of Lieberman, who is fluent in Persian.

Lieberman, an Ashkenazi Jew who learned Persian during her education at Israel’s Bar Ilan University from which Mossad Director Yossi Kohen also graduated, became popular among Iranian dissidents and Mousavi supporters during the 2009 elections in Iran because of interviews toward Iran and the role she played in bringing Makan to Israel.

Under the identity of a journalist, Lieberman, who is also codenamed Didush and Nesteran Azadmerd, played a role in bringing Payam Feili to Israel in 2015, who is another prominent dissident figure in Iran.

There is another piece of evidence that Lieberman is no journalist. She was making regular payments to regime dissidents, which contacted her and gave her information. In this sense, Lieberman contacted Iranian regime dissident Morteza Salimi through social media and made monthly payments of $1000 from 2013 to 2015 in return for information about Iranian dissidents and companies which send aid to Palestinians.

Neda Amin, Lieberman and their operations in Turkey

Neda Amin is another figure Israeli intelligence uses for its operations against Turkey through the media. Amin, who applied for asylum to the United Nations High Commissioner of Refugees (UNHCR) in a third country in 2014 by coming from Iran to Turkey, has been writing news articles for the Times of Israel since 2016.

Amin, who gained popularity like Lieberman among Iranian dissidents with her articles, has links to both Lieberman and Salimi. Morteza, who transfers money to Amin through Iranian refugees in Turkey, at the same time sent Amin a laptop and cellphone which was loaded with spy software of Israeli intelligence in July 2017.

Amin, who was an asylum-seeker in Turkey with the direction of Israeli intelligence, started dark propaganda against Turkey through social media accounts. After her real identity was revealed, Amin was deported from Turkey in August 2017. Then, with the assistance of the editor of the Times of Israel, David Horovitz, she applied for asylum in Israel and was accepted. Amin continues her propaganda activities against Turkey in Tel Aviv.

All the examples above illustrate how the Israeli government targets Turkey and Turkish intelligence by using the media and covered journalists for its operations in other countries such as Turkey and Iran.