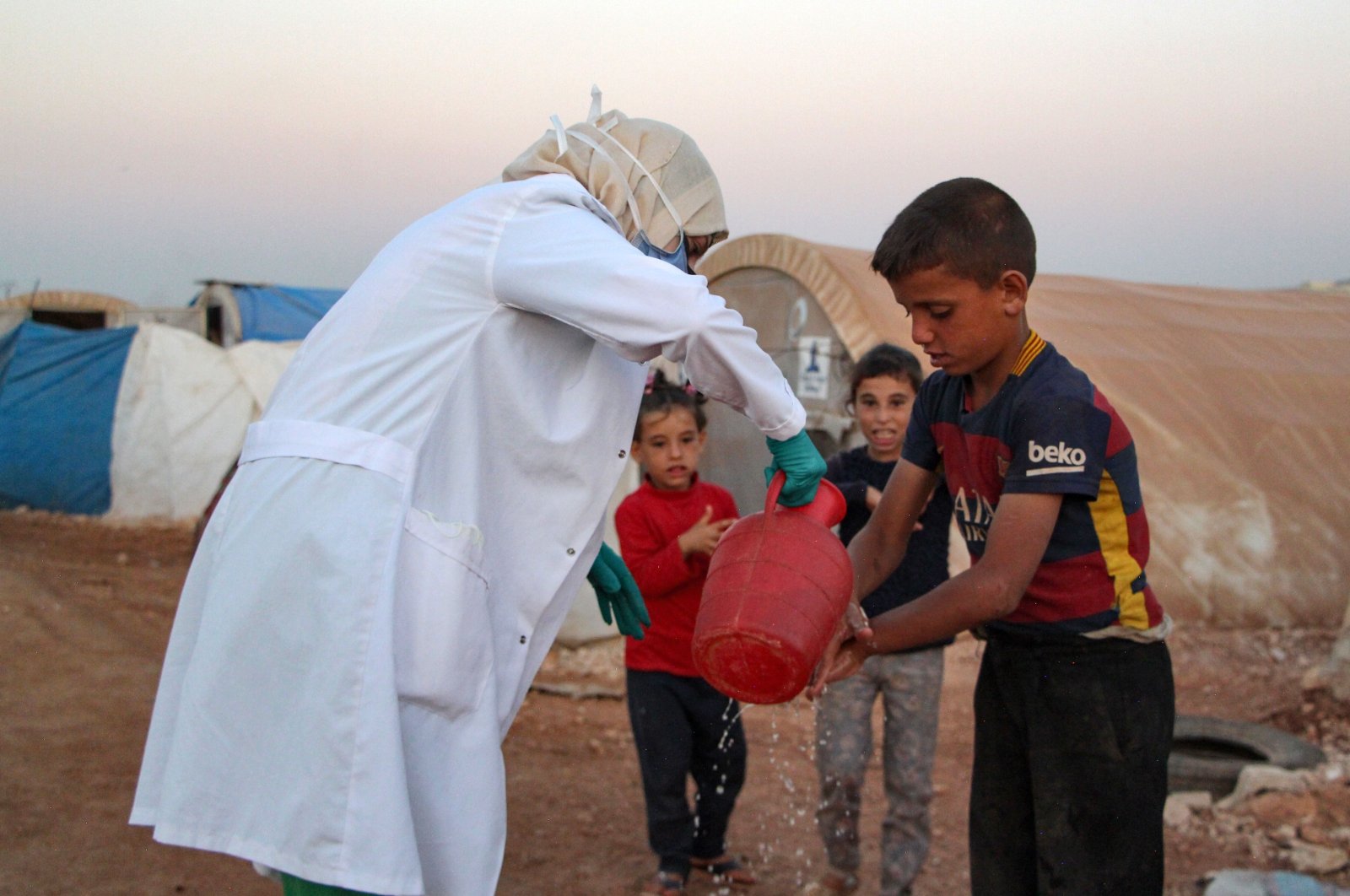 A Syrian doctor, under her own initiative, instructs children how to properly wash their hands during the coronavirus pandemic, east of the Turkish-Syrian border in the Janid displacement camp near the town of Dana, northwestern Idlib province, Syria, July 26, 2020. (AFP Photo)
by Eralp Yarar Jul 30, 2020 12:58 pm
RECOMMENDED

The existing humanitarian crisis in northwestern Syria’s Idlib region has been further compounded by the rapid devaluation of the Syrian pound, the COVID-19 pandemic and the closure of the Bab al-Salam border crossing, as displaced civilians in the area are in dire need of international assistance and medical aid.

Speaking to Daily Sabah, David Swanson, regional spokesperson for the Syria crisis at the United Nation's Office for the Coordination of Humanitarian Affairs (OCHA), said that the U.N. continues to remain deeply concerned over the safety and protection of more than 4 million civilians in the northwestern parts of the country, more than half of whom are internally displaced.

“Humanitarian conditions in the area remain dire. The impacts of displacement, ongoing military operations, security hazards and over nine years of conflict are being further compounded by the recent rapid devaluation of the Syrian pound and the ongoing COVID-19 pandemic,” he said.

He added that the impact of these developments is entrenching existing humanitarian needs and creating new ones in an area where some 2.8 million women, children and men already rely on assistance to meet their basic needs for things such as food, water, shelter, health care and education.

Idlib has long been under siege by the Bashar Assad regime's forces and its allies, and previous cease-fires in the region have been plagued by violations. The provinces's population had gradually increased as many people have fled from regime attacks and oppression by terrorist groups. The displacement of civilians has intensified since mid-December, however, when the Russian-backed Assad regime started a new assault to seize the last opposition bastion. It is estimated that over 1 million Syrians have moved near the Turkish border due to intense attacks over the last year, while half of these Syrians were displaced after November 2019.

As tensions heightened, Russia and Turkey in March reached an agreement to halt the violence and the flow of displacement. As part of their deal, military activities were stopped in Idlib and a 6 kilometer (3.7 miles) security corridor was established along the critical M4 highway. Since the cease-fire, relative calm has prevailed in the region, while Turkey and Russia have been conducting joint patrols along the M4.

Also touching upon the impact of the recent loss of the Bab al-Salam border crossing, Swanson said that the main issue is the inherent logistical challenges due to being limited to one border crossing as opposed to two. As he stated, in the first six months of the year, 8,365 trucks crossed into Syria from Turkey, including 6,779 from Bab al-Hawa and 1,586 from Bab al-Salam.

“Each of the two border crossings Bab al-Hawa and Bab al-Salam provided access into a different area of control, and access has not always been possible between the two areas of control. The two crossings provide direct access to the largest concentrations of camps and settlements in the two areas, where needs are particularly high. Having direct access to these areas allows for the most efficient response,” he said.

The 15-member U.N. Security Council earlier this month reduced the number of gates for aid deliveries from Turkey to Syria to one, with only the Bab al-Hawa border crossing to remain open for humanitarian supplies for another year.

Authorization for the continued transport of aid to Syria, a system in place since 2014, expired this month after Moscow and Beijing used their veto power within the Security Council, which then in turn rejected a counterproposal from Russia. Later, the German-Belgian proposal was approved, meaning the Bab al-Hawa crossing point on Syria's northwestern border with Turkey will be maintained for one more year, until July 10, 2021.

Russia, the Assad regime’s key ally, and China argued that the U.N. authorization, allowing aid to be distributed without permission from Damascus, would be a violation of the latter's sovereignty.

While humanitarian supplies were delivered to Syria previously through four border crossings, Russia closed the ar-Ramtha gate between Syria and Jordan, and al-Yarubiyah with Iraq last year.

“Bab-al-Hawa was already heavily congested, receiving the bulk of trucks passing over the border this year. In 2020 alone, about 80% of cross-border deliveries into northwest Syria went through Bab al-Hawa. The daily truck crossings in Bab al-Hawa increased from 30 in 2019 to as many as 120 since the beginning of 2020, with 1,182 in June 2020 alone,” Swanson explained. “Given these numbers, going down to one hub will put additional pressure on Bab al-Hawa from a logistics perspective, as Bab al-Hawa has already been operating at maximum capacity for a long time now.”

Another point Swanson mentioned about the loss of Bab al-Salam is that it creates a more costly, higher risk and less effective response.

“While the financial and operational impact is difficult to gauge in exact quantities, it is anticipated that costs will increase, risks will increase and timely responsiveness will decrease. Many NGO partners also have their warehouses located in the Azaz corridor so Bab-al Salam enabled the most efficient delivery to these locations,” he said.

In such a situation, where people lack access to their most basic humanitarian needs, those living at camps or open spaces close to the border with Turkey are the most vulnerable, said Obaida Hitto, TRT World's Syria correspondent. He noted that almost 80% of those who were displaced last year that came to the areas near the Turkish border are women or children. He also added that more than half of them have been displaced multiple times.

“They do not have access to electricity, water, medical care and many other most basic humanitarian needs. There is nothing consistent to fulfill their basic needs,” he said.

Underlining the importance of Turkey's humanitarian efforts and activities, Hitto said that the country's non-governmental organizations (NGO), aid groups and state agencies are at the forefront of the aid response in northwest Syria.

While many international actors have been fueling the conflict in Syria since the beginning of the civil war in 2011, Turkey has been trying to de-escalate the violence and enable local people to live in a peaceful and stable environment. As it did in various regions in the country's north, Ankara is trying to address the lack of infrastructure. In addition to the construction of basic facilities such as hospitals and schools, Turkey’s strategy also includes the improvement of water and electricity delivery; efforts that are conducted in coordination with local executives.

“Turkish NGOs and local organizations are working to do the best they can. Unfortunately, these efforts will not be enough for these people without international assistance on a much bigger scale,” Hitto added.