Is Washington not disturbed by S-300s in Crete? 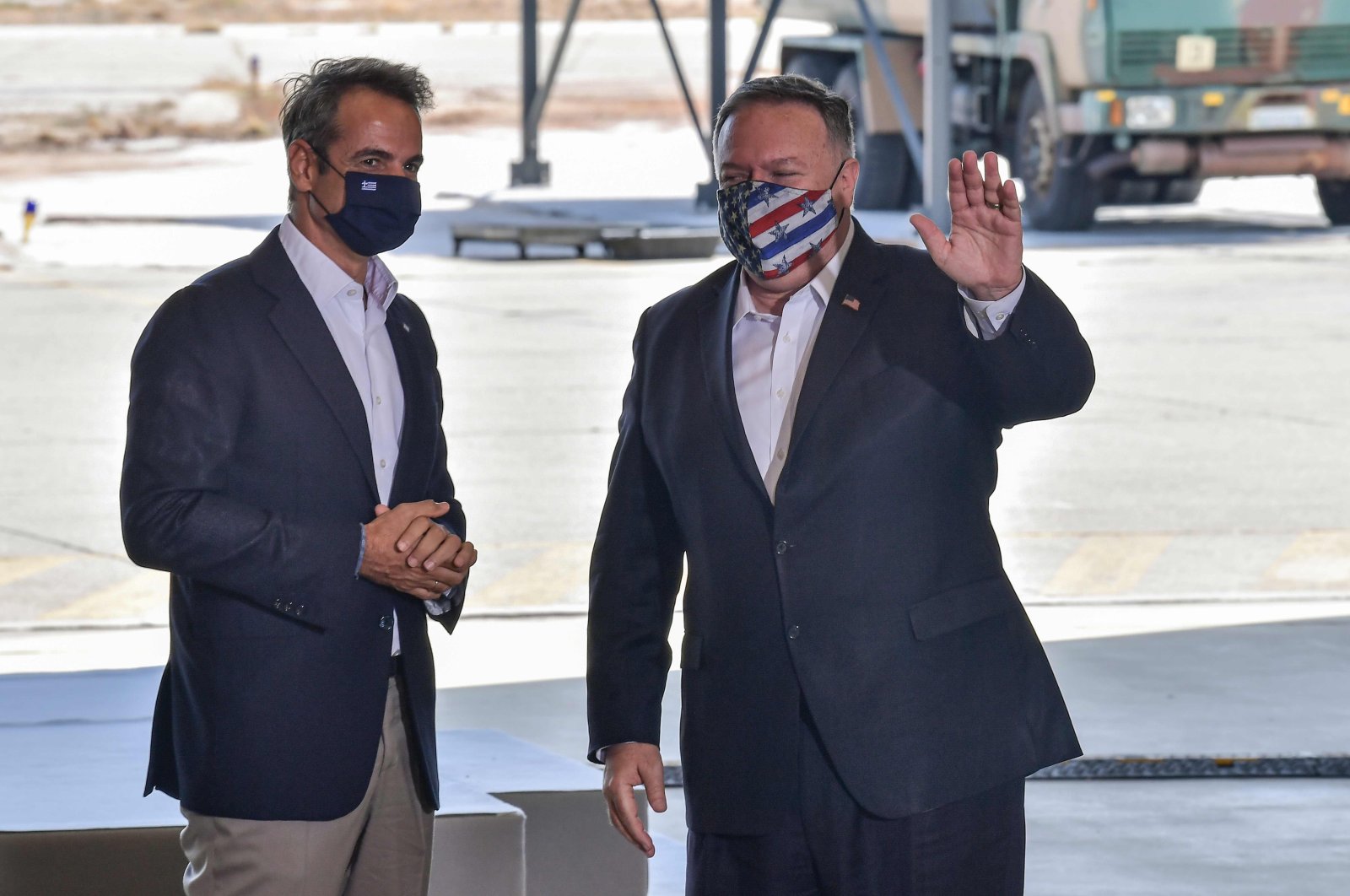 U.S. Secretary of State Mike Pompeo (R) waves next to Greek Prime Minister Kyriakos Mitsotakis during his visit to the Naval Support Activity base in Souda, the foremost U.S. naval facility in the Eastern Mediterranean on the Greek island of Crete. (AFP Photo)
by Nur Özkan Erbay Oct 15, 2020 3:03 pm

Some signs in recent days suggest that the short-sighted policies and cadres that shape relations with Turkey today in Washington, just as they did in the Barack Obama era, are likely to jeopardize the two countries' joint achievements in the long run.

As an example of that, a U.S. State Department spokesperson made a statement Tuesday and claimed that Turkey’s activities in the Eastern Mediterranean are "provocation," a claim that received an immediate response from Ankara. This was actually an example of Washington's inconsistent moves in its foreign policy recently.

Washington has called for a reduction in tension in the Eastern Mediterranean; however, it does not seem to be an impartial and sincere mediator in many aspects of the ongoing conflict, which requires extensive discussion.

In fact, accusing Turkey unfairly but remaining idle on Greece’s provocations makes the U.S. case unconvincing. It wouldn't take much effort for Washington to notice that in the last 27 years, Russian-made S-300 missile defense systems were deployed on the Greek island of Crete and were upgraded by Moscow just last month.

Recently, the visits of U.S. Secretary of State Mike Pompeo to both the Greek Cypriot side and the island of Crete were closely followed by Ankara. Pompeo did not meet with officials in the Turkish Republic of Northern Cyprus (TRNC) during his visit to the island; instead, the U.S. chose to lift the arms embargo on the Greek Cypriot administration, which has not gone unnoticed by Ankara.

In the midst of this close diplomacy between Washington and Athens, it has been deemed provocative that Ankara sent its seismic research vessel Oruç Reis to the Eastern Mediterranean. On the other hand, it is not regarded as odd that Washington has not confronted Greece for openly militarizing Aegean islands against a NATO member since the 1960s.

The Greek Cypriot administration wanted to deploy two S-300 batteries on the island that it purchased from Moscow in 1998. After encountering extreme international pressure, it gave up on the idea but was unable to return them to Russia. The batteries were then put into service by the Greek air force in exchange for providing the alternative weapon systems TOR 1 and SUZANA to the Greek Cyprus administration. Today, Greece still deploys S-300 in Crete, located approximately 600 kilometers (373 miles) from Turkey's shores.

Considering all these facts and 100 years of ongoing problems between Turkey-Greece, the U.S. should remain neutral not only for reconciling the relations of two NATO countries but also for its own national interests. Therefore, the issues on territorial seas, airspace, continental shelf, the militarization of the Greek islands, Cyprus and NATO disputes between Ankara and Athens would only be solved based on fair and realistic approaches.

Although it is not reflected in his actions at the moment, we see the necessity of this approach in Pompeo's own statements. Pompeo in late September voiced support for talks between Turkey and Greece during his visit to a U.S. naval base at Souda Bay on Crete, after meeting the Greece prime minister on the second day of his trip to the country. He underlined supposedly that Russia is a destabilizing force in the Eastern Mediterranean.

Defining Turkey's activities in the region as a provocation and delegitimizing efforts against Turkey's rights and gains, generate unrealistic and redundant polemics and controversies between Washington and Ankara.

Meanwhile, it is not difficult to understand that one of the main motivations behind these polemics that go completely beyond real politics, is the influence of the Greek-Hellenic lobby in Washington and especially Orthodox-Evangelic religiously motivated groups around Vice President Mike Pence.

As a matter of fact, despite tactical differences, at least Washington and Ankara seem to be striving for a common goal for a political solution in Syria and Libya. Especially when the two countries have a mature experience and knowledge within NATO.

It remains to be seen if Washington will endanger its relations with Turkey in order to contain a perceived Russian threat to Greece and continue to ignore the facts on the ground.

Evidently, Ankara is clearer than ever on this matter. President Recep Tayyip Erdoğan says that Turkey is in favor of diplomacy at every opportunity but will never give up on its gains and rights in the region. If Washington's policy continues to stick with daily gains with Greece, perhaps it will not be able to establish a long-term and sustainable communication channel with Ankara. It's high time for the U.S. to understand this as well.