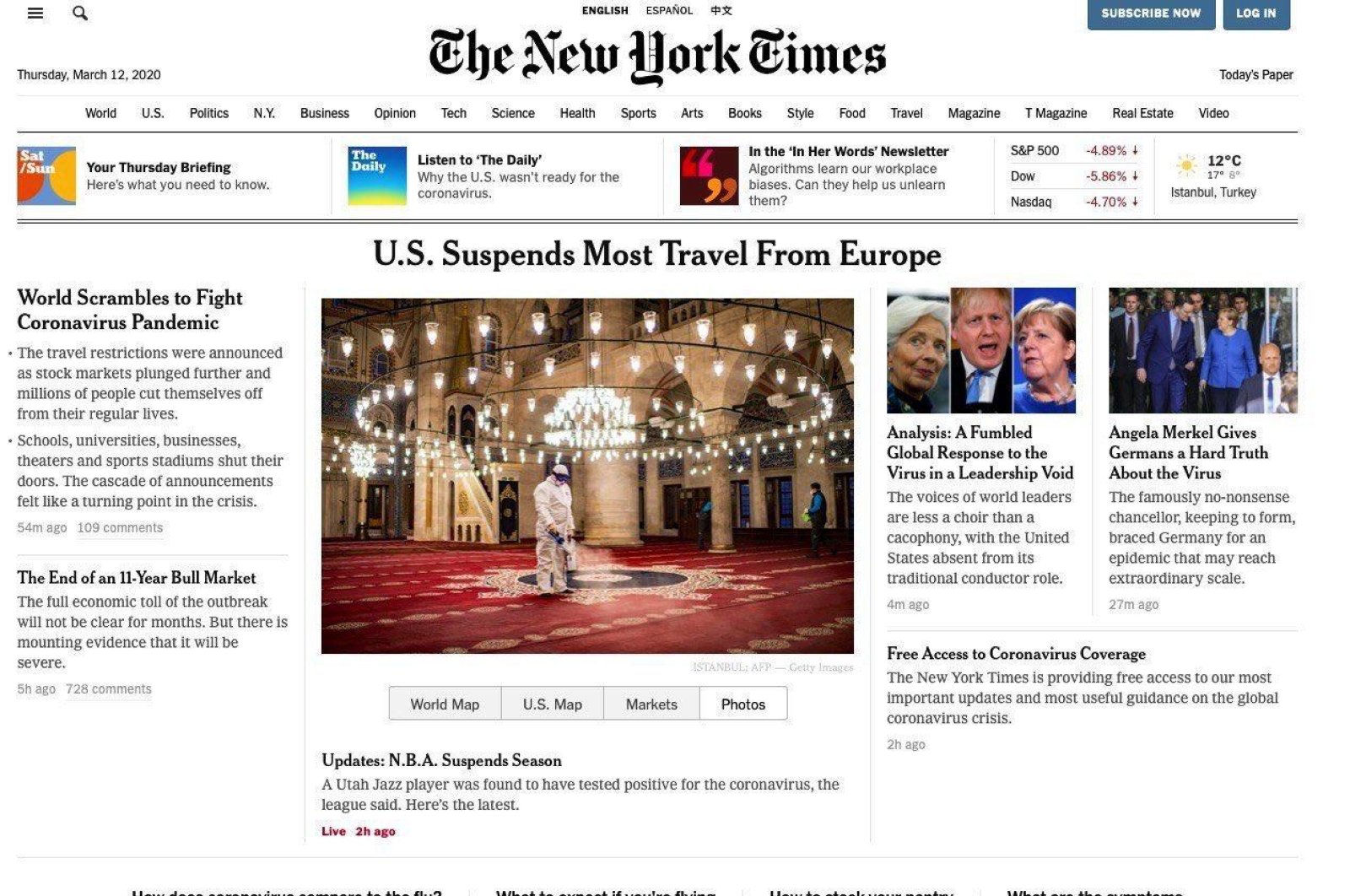 The New York Times uses photos of Turkey with coverage of U.S. travel restrictions on Europe, despite Turkey being exempted from the measures, March 11, 2020.
by Nur Özkan Erbay Mar 19, 2020 1:55 pm
RECOMMENDED

This might be the first time since the outbreak of the plague known as Black Death in the 1300s that the world is experiencing a deadly pandemic of this scale.

Humans like certainty and being in control of their surroundings. Having witnessed many bloody wars, massacres and genocides that killed millions of civilians, this is probably the first time since World War II that humans feel so helpless in the face of a disease that has affected thousands across the globe.

Despite having weapons of mass destruction, nuclear bombs, missiles, the latest weapons and high-tech science centers, all countries without an exception have been struggling against this new coronavirus for the past three months.

A cure for the virus has not yet been found, and according to official figures, it has killed almost 9,000 people so far. As the pandemic intensifies, countries all over the world are shutting their borders, airways and highways in a bid to slow down the spread of the virus.

According to research, without an antidote or measures to slow the virus down, a significant percentage of the world's population could be affected by this virus, which began in China's Wuhan and spread throughout the world.

While the world is still trying to make sense of the extraordinary situation, international media is taking advantage of the chaos by twisting the truth. Credible news channels like CNN, BBC and The New York Times repeatedly used photos of Turkey to report about the coronavirus even though the stories had nothing to do with the country.

This raises many questions: Could these errors be panic-induced or was this done purposefully with an agenda in mind? Is it a coincidence that Turkey, which is one of the countries with the lowest number of cases and which was not included on the list of flight restrictions by the EU and U.S., was exposed to such a systematic error?

Looking at the recent examples, The New York Times used a photo from Istanbul to report the U.S. travel ban on flights from Europe. The BBC also used photos of Turkey in its news about Canadian Prime Minister Justin Trudeau and his wife going into quarantine, the U.S. travel ban and closure of markets in Italy.

CNN published irrelevant photos of Turkey alongside news of the cancellation of the Formula One Grand Prix Race in Melbourne, the statement read by the head of the heart surgery department in Italy and the suspension of public access to the Capitol Complex.

The Presidency's Communications Director Fahrettin Altun sent letters to The New York Times to address the issue. The newspaper responded by saying: "You are definitely right; those photos should not have been used. The photo editors who are responsible also admitted that it was wrong. The photo was removed."

Do you think the reply from the newspaper is convincing enough? Assuming that the mentioned media outlets have the most professional editorial staff of the world, would it not be naive to believe they made the same mistake more than once?

Many similar questions could be asked yet the fact that media is distorting reality so boldly, and that it does not refrain from doing so, signals that these are more than just mistakes and that information warfare is underway.

We could expect this especially from the Russian media, which uses digital platforms aggressively to spread misinformation. Western media was very critical of this and the U.K. went as far as to create a special unit to combat fake news coming from Russia.

In a similar vein, politically motivated information warfare seems to be unfolding between the U.S. and China. We saw the latest example of this when the U.S. demanded a reduction in the number of Chinese journalists in the country, saying that otherwise visas will not be issued. In retaliation, China decided to cancel the press cards of representatives of The New York Times, Washington Post and CNN in the country and to deport them immediately.

These examples prove how media can be used as a tool for asymmetrical warfare among the states where the truth can be bargained away.

These days, the coronavirus seems to be putting everyone through the most important test of all time. If a solution to COVID-19 is not found soon, the whole world will suffer the consequences.

In countries such as Germany, the U.K., France and Italy, it is estimated that the bed capacity of hospitals will not be sufficient and that cases will increase if the vaccine is not developed soon. In the U.S. the view prevails that the administration’s measures are not enough and that current figures do not represent the reality.

In the face of misinformation spreading instantaneously across the digital world, it is more important than ever to convey real information to the people. Yet, it is possible that information inflation and manipulation can occur vis-a-vis this global outbreak.

Therefore, in such an environment where the whole world is in fear and panic, the task of journalists, who offer the truth, may have become sacred. Expecting honest reporting from media channels such as The New York Times, CNN and BBC is not only Turkey’s right but also the right of every country that is combating the new coronavirus.