Keep the oil for Syrians 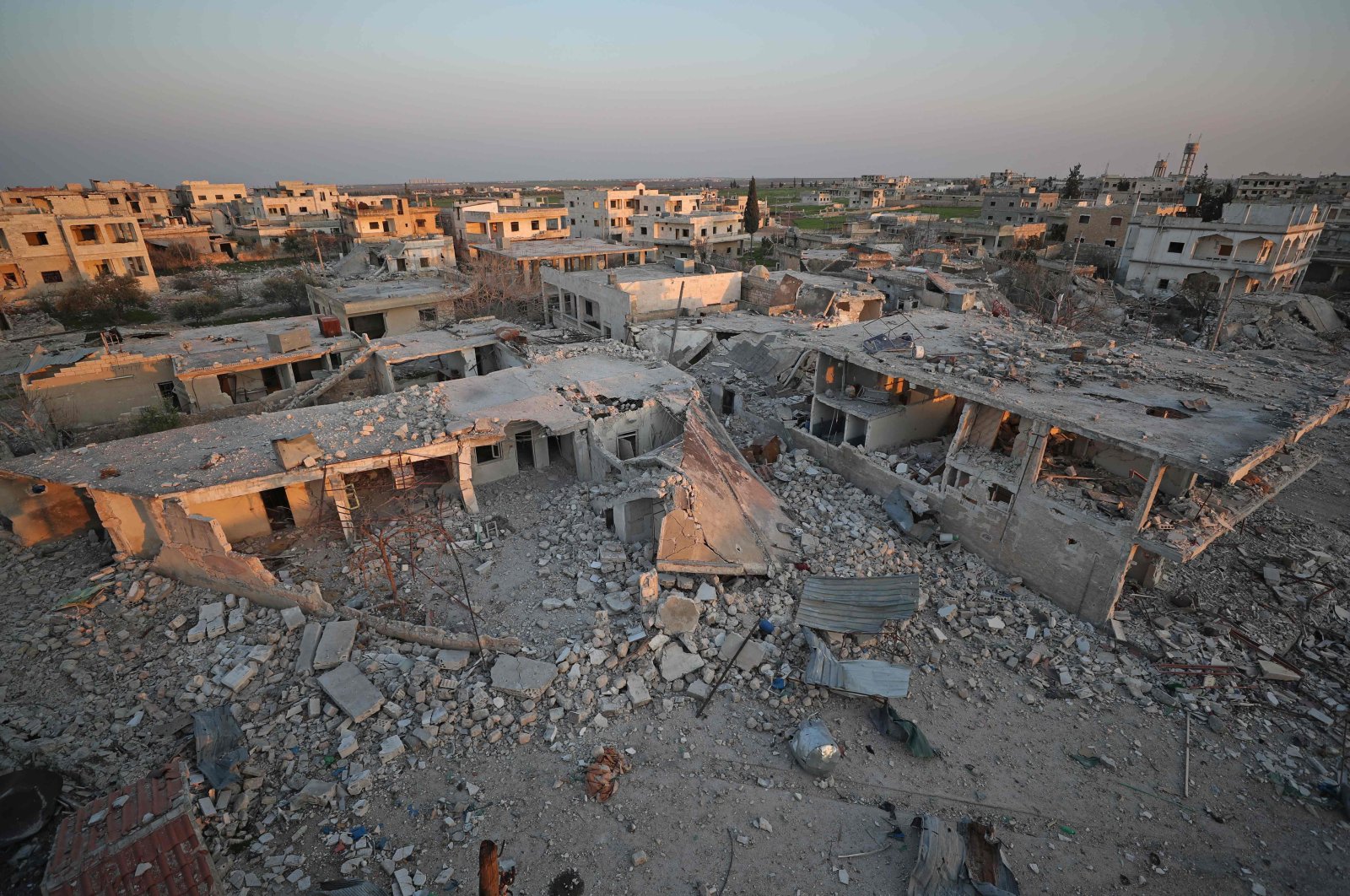 A picture taken on March 7, 2020, shows destruction in the village of al-Nayrab, about 14 km southeast of the city of Idlib in northwestern Syria. (AFP Photo)
by Nur Özkan Erbay Mar 12, 2020 3:39 pm
Edited By Sinan Öztürk
RECOMMENDED

U.S. President Donald Trump rallied the crowd in October last year when he offered varying descriptions of the U.S. military's role in eastern Syria. "We've secured the oil and, therefore, a small number of U.S. troops will remain in the area where they have the oil," he said.

Three days later, during his speech in Chicago, he went further, declaring the oil to be America's. "I've always said: 'Keep the oil.' We want to keep the oil. $445 million a month? Keep the oil," he said.

The humanitarian and economic burden for the reconstruction of Syria is getting heavier by the day. A large part of the country is full of empty cities and villages left by Syrians fleeing from the Bashar Assad regime’s oppression. Around 7 million Syrians are trying to survive amid the hardest conditions of forced displacement, some in countries with good conditions such as Turkey, and others in conditions contrary to humanitarian standards, such as at the Greek border.

On the other side, for the construction of a new Syria – the territorial integration of which has been ensured and the political solution of which cannot be postponed any longer – the actions of countries like Russia and the U.S. on the field, despite their many words, show that their intentions are not realistic.

Maybe this was the reason President Recep Tayyip Erdoğan made a call the previous day to test to what extent Russia and the U.S. were supportive of the reconstruction of Syria.

Turkey and Russia could use the oil reserves in Syria’s Qamishli and Deir el-Zour to rebuild war-torn Syria with the help of financial support from Moscow, President Erdoğan said Monday. The president said Putin did not respond negatively to this idea and that a similar proposal could be made to President Trump.

“Terrorists are exploiting the oil reserves. The oil they drill out is not processed oil; it has no quality, but if it is taken and processed, we would have a chance of reconstructing Syria. This would reveal who wants to preserve the unity and integrity of Syria and who wants to take control of it,” Erdoğan stated.

After President Erdoğan’s call, let’s remember the facts. Syria had 2.5 billion barrels of crude oil as of 2011, before the conflict erupted and Syria was producing around 385,000 barrels per day.

Compared to world standards, these numbers might not seem big, yet we have to remember that Syria’s oil fields are not under its control today, but rather under the control of Russia and the U.S.

Last October, Trump had announced that U.S. troops would withdraw from Syria under the condition of holding the oil fields in Deir el-Zour. Following this announcement that came after Turkey launched its Operation Peace Spring in northern Syria, the U.S. withdrew from the area northeast of the Euphrates and located itself farther south, to the south of the M4 highway, together with the PKK/YPG.

The most important factor in this relocation was that 100,000 to 200,000 barrels of Syrian oil were procured from the banks of the Euphrates. Therefore, a significant portion of the oil wells lies to the east of the Euphrates.

U.S. Defense Secretary Mark Esper’s statements last November pointed out a different dimension of the U.S. decision to keep its troops to protect the oil in the region. Esper said that the military's oil field mission will also provide the SDF, dominated by the YPG, a source of income.

On the other hand, the Assad regime gave Russia special permission and authority to drill the oil and gas fields of the country last year. Following this permission, there have been occasional clashes between the Assad regime, Russia and the U.S.-SDF alliance at the oil fields in Deir el-Zour.

Now the U.S.-backed SDF is demanding a right to the oil income, allegedly in the name of the Kurds. On the other hand, Russia has control over oil fields in its own regions in the name of the regime. But, is it not the people of Syria who are the sole owners of these incomes?

Today, it is almost impossible to speak of economics in Syria, where there is no real government. The oil and gas fields of a country – bogged down in war and missing 70% of its population, which have fled outside of its borders – are controlled by Russia and the U.S. More than half of the 3 million people remaining within the country’s borders are jobless and below the hunger threshold, while their country, their cities and villages have been destroyed.

On the other hand, the last census in Syria was conducted in 2004. The current demographic structure of the country makes it difficult to discern the reality, with the Assad regime and its backers, and terrorist organizations such as the PKK, Daesh, Hayat Tahrir al-Sham (HTS) and their sponsors swarming throughout the country. Qamishli, under the control of the Assad regime and Russia, has a population of 400,000, and the Kurds in the region make up 75% of the total population. The remaining 25% in the province is made up of Arabs, Assyrians and Syriacs. In U.S.-controlled Deir el-Zour, on the other side, a large part of the 1 million Syrians are Arabs and a small percentage are Kurds and Armenians.

This demographic table shows that the territory and energy incomes of Syria do not belong to one sole ethnic group, organizations supported by Russia or the U.S. or the Assad regime, which has lost its legitimacy. The proposal made to Russia and the U.S. by Turkey and President Erdoğan is vital in the whole reconstruction of Syria. It is time to say, “Keep the oil for Syrians.”