Lebanese people do not want outside interference in politics 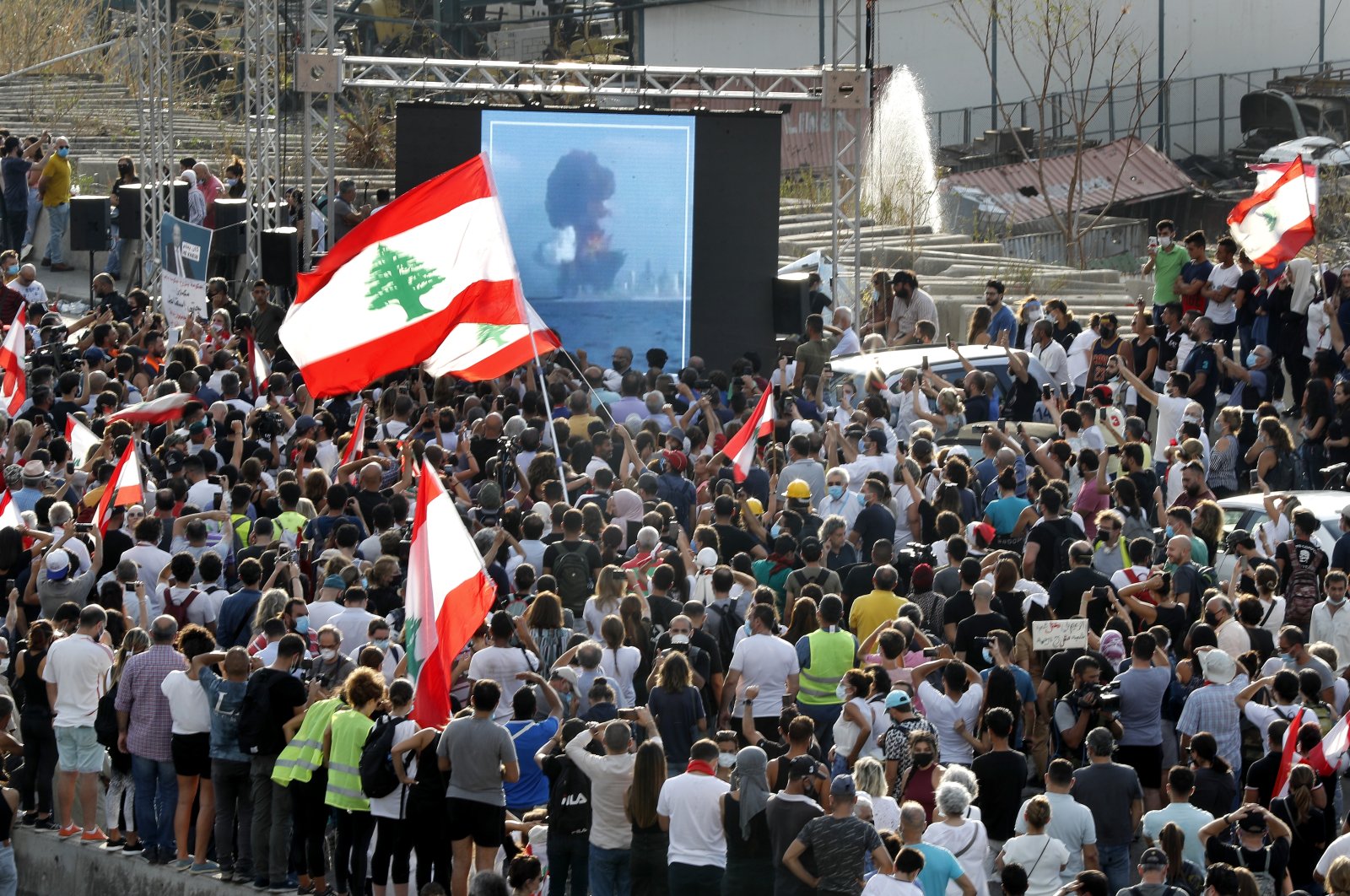 People watch on a giant screen the moment of the massive explosion, as they gather in honor of the victims killed or wounded in the Lebanese capital, in Beirut, Lebanon, Aug. 11, 2020. (AP Photo)
by Nur Özkan Erbay Aug 13, 2020 1:43 pm
RECOMMENDED

Following the horrifying event described as "Beirut’s Hiroshima," Turkey is helping to bandage Lebanon's wounds. The people of Lebanon and the Lebanese government welcomed Vice President Fuat Oktay and Foreign Minister Mevlüt Çavuşoğlu's visit to Beirut earlier this week with gratitude. Oktay, visiting the ravaged Port of Beirut, said Turkey "will be here until the wounds of the Lebanese people are healed." He stressed that there is a great bridge of love between Turkey and Lebanon and that Ankara will continue sending aid to the country.

Aid coming from Turkey carries great meaning for the Lebanese people. The authorities, the media and the entire Lebanese society place Turkey in a different category than other countries due to its close historical, cultural and economic ties for centuries.

On the other hand, journalists, bureaucrats, academics and ordinary people from the streets of Beirut believe that the fragmentation of the political sphere whets other powers’ appetite to interfere in Lebanon’s internal affairs for their own agenda and interests. These countries are primarily Iran, France, Israel and Saudi Arabia.

Meanwhile, the public continues to express rage against the Lebanese government for its negligence in failing to prevent this tragedy. A question heard in every corner of the country is "Why couldn't this disaster be prevented?" The public – in the middle of an economic and financial crisis – expects politicians to facilitate the country's economic recovery as well as rebuild the city following the billions of dollars in damage caused by the blast.

The people of Lebanon believe that countries such as France have not reached out genuinely but instead present unrealistic and romanticized solutions, just as French President Emmanuel Macron did during his last visit. The Lebanese people want their wounds from this disaster to be bandaged as soon as possible. They do not want foreign countries to act in the name of their own political agendas and interests in the country. On the other hand, an election is not expected to be held in the country for at least two years because, in order for that to take place, a constitutional amendment is needed.

Furthermore, everyone in Lebanon, ranging from journalists and bureaucrats to academicians and ordinary people, is suffering from the economic meltdown in the country. Professor Khaled Tadmori of Lebanon University, with whom we met, told us that the salaries from public institutions are given in installments and that he himself receives his in this way. Noting that the grain silos were largely destroyed in the blast at the port, Tadmori underlined the importance of Turkey’s decision to allow the Lebanese to use Mersin International Port during these hard times.

Tadmori explained that reconstructing the silos and integrating the northeastern Port of Tripoli with that of Mersin would help mitigate the crisis more quickly. He said that although the signing of such a protocol between the two ports had been expected for some time, it had been stalled, just as in the case of the Saida Hospital built by Turkey in 2010, which could not enter into service despite the fact that its construction had been completed. He added that sea transportation between Turkey’s Antakya province and Tripoli was to be launched but that it was halted due to the developments in neighboring Syria.

Sharing data on the country's desperate economic situation over the past six months, which peaked at the blast, Tadmori said that the material damage from the Beirut explosion surpassed $15 billion and that the national currency, the Lebanese pound, had lost record value against the U.S. dollar in the past few weeks.

Journalists in Beirut also confirmed that the country is in deep economic trouble. It takes months for the Lebanese people to get their money back once it is deposited in a bank account. Today, nearly half of the country's population of 6.8 million lives abroad, and those that have emigrated send money back to Lebanon to help their relatives make ends meet.

On the other hand, Iran's use of its proxy Hezbollah to interfere in the country, Israel's continued border clashes with Hezbollah and France's claim that it will “restore Lebanon’s freedom” are deeply disturbing the people of Lebanon. In addition, Russia and the U.S. similarly continue to protect their interests in Lebanon. Therefore, it is noteworthy that Macron, who visited Beirut just hours after the blast, only wandered the streets of the Christian district. Lebanon, being the only Arab country with a Christian president, a Sunni prime minister and Shiite head of parliament, has no patience left for foreign powers trying to create conflicts within its people on the grounds of religion, sect or ethnicity. Though this diverse state administration established through the Constitution of Lebanon in 1943 and the Taif Accord of 1989 seems to work, it cannot be said that the state operates systematically.

Tadmori said that Macron’s visit to the Maronite district in this manner was perceived by a large base as an indication of France’s old colonial mindset. “Macron is treating Lebanon as his little brother. In September, Lebanon will celebrate its 100th anniversary, and he will come for that. According to Macron, we have to be grateful to France. He claims that France gifted us our freedom. However, France, which occupied Lebanon, is ignoring our martyrs,” Tadmori said.

On the other side, the people of Lebanon, who underwent a civil war of 20 years, and especially the youth know that clashes will bring no good to anyone. The youth, who do not want to fight against their own people anymore, resort to leaving the country. Today, 15 million Lebanese are abroad. Rapid migration has taken place since World War I and the 1970s. This should serve as a significant message to those aiming to fan the flames of conflict in the country.

Under all these circumstances, Lebanon tries to heal. While the wounds are bandaged, the people of Lebanon are aware of who is engaging in aid without seeking anything in return and who is trying to further their own agenda by exploiting the fragile situation in Lebanese politics.