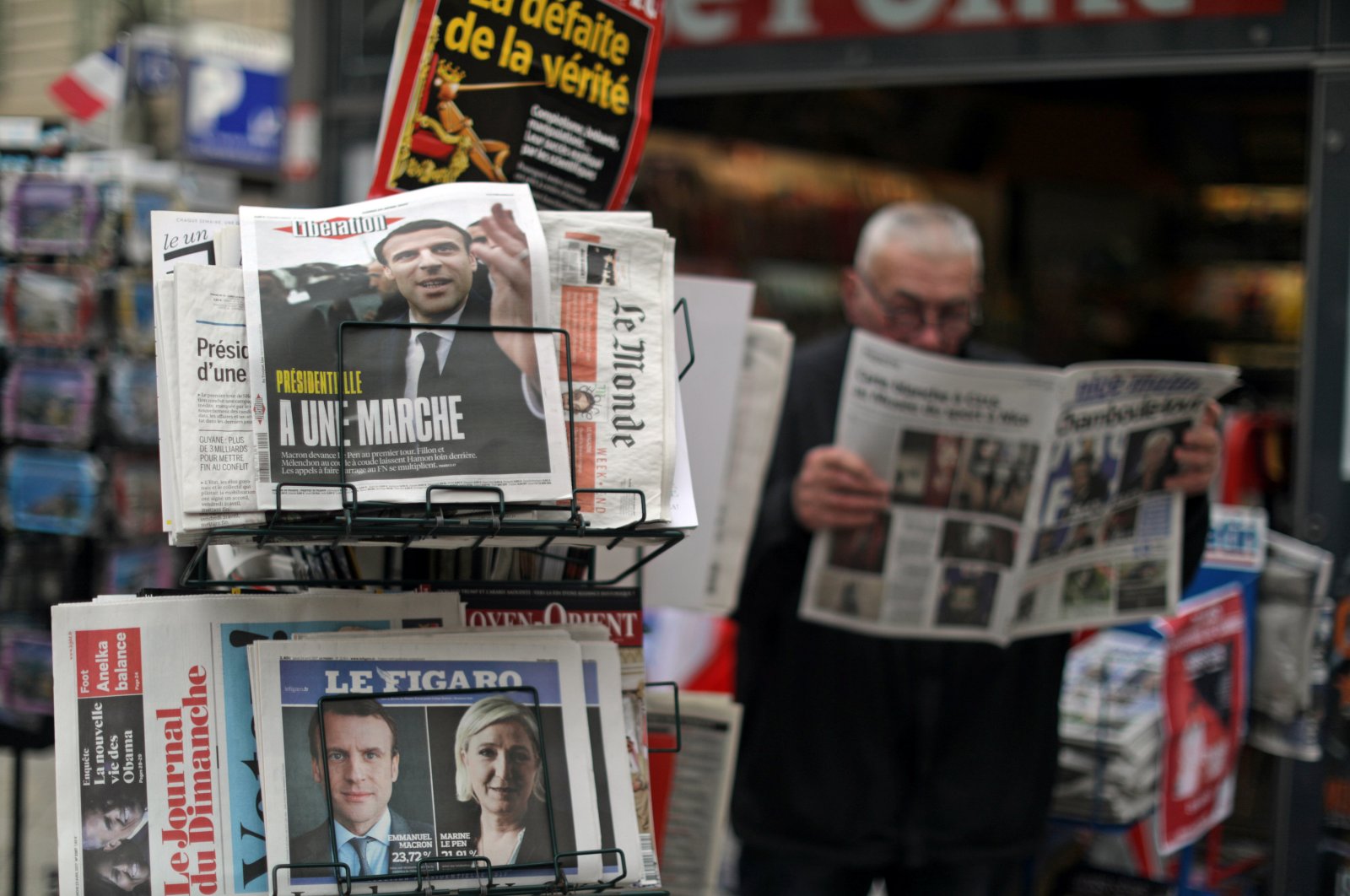 A man reads the local newspaper near a rack which displays copies of French daily newspapers with front pages about the results in France's Presidential election in Nice April 24, 2017. (REUTERS Photo)
by Dilara Aslan
Apr 01, 2020 3:57 pm

Accelerated by the emergence of the new coronavirus, the media sector will go through significant changes to adapt to the digital age, facing new challenges

Just like in many other sectors, the coronavirus pandemic has also had a great impact on the media. In a time when professionals from different occupations are trying to manage work from home, correspondents, who usually spend a significant part of their time on the field, running after stories and people, and the whole media sector, in general, find themselves face-to-face with new challenges. Fighting an increase in fake news, managing work remotely, and the traditional media's adaptation of a new digital model will be among the many tests the sector will have to go through.

The media sector will have to adapt to survive. Technology will play a bigger part in the sector as digital media gains power. Yet, digitalization surely will bring along new challenges and problems with it. For instance, as social media takes place of conventional media, the problem of fake news will be more obvious than ever.

Speaking to Daily Sabah, Yusuf Özkır, an associate professor at Istanbul Medipol University's Faculty of Communications, said the fact that the number of fake news increases together with digitalization is a disappointment.

“People using disinformation, exaggeration and fiction whether as individuals or as organizations, indicates that the problem is deep and directly related to people. While authoritarian countries have their own solutions to prevent fake news, in open countries such as Turkey, legal processes have to be used against them. True information has to be shared regularly and transparently by relevant sources,” Özkır said, pointing out that even this might not be a definite solution.

With fake news becoming more widespread, governments may want to propose solutions to this problem and introduce new tools of surveillance. In Turkey, even though officials made daily announcements regarding the spread of the new coronavirus, people still tended to listen and believe unofficial statements and propaganda, showing the clear appearance of a new challenge.

Interior Minister Süleyman Soylu said Tuesday that 2,863 accounts making propaganda on social media were detected in the last 15 days, while 70% of them belonged to terrorist organizations.

“We live in a world where everyone who owns a mobile phone is a correspondent. Yet, this is not enough and leads to more widespread fake news. This shows that the world will need professional journalists more than ever,” digital journalist and academic at Hasan Kalyoncu University Ertuğrul Acar told Daily Sabah. He added that newspapers, magazines and books will become slowly obsolete while the process of producing news will also significantly change.

Acar pointed out another transformation that this process will bring, “Journalists won’t have to work in big media outlets to do their jobs anymore since costs will decrease, they will launch their own platforms.” He gave the example that many experienced journalists in Turkey today have their own YouTube channels, create content that is watched by millions of people and make money.

People confined in their homes will be making much more frequent use on social media, whether it is to follow the news, check on their friends or share their own situation. Internet editors and correspondents, that know how to produce news online and how to reach people, will gain significance in the new period. Acar gave the example of Wikileaks founder Julian Assange. The site published millions of documents, yet these papers were only made meaningful by journalists.

“I do not think that withdrawing from the field is entirely possible, yet everything does not have to be done in the office either,” said Daily Sabah Multimedia Manager Rahmi Osman Kaçmaz. “Together with this process media companies will lean toward the concepts like home office, remote work and field works, where this will pose no problems, this model will be adapted quickly.”

The new media of our time is characterized by its digital nature and low costs of production and distribution. Besides conventional newspapers and magazines, many leading outlets now have separate websites with different content. Media now is far more accessible thanks to the internet.

After this period of confinement ends, just as in many other sectors, it is inevitable that traditional media will change, said Özkır.

“However, this does not change journalism’s feature that is identified with being on the field. Those that can convey events to the public opinion, with their correspondents on the field and their technical networks, will be a step ahead. The adaptation of this with the digitalization process, on the other hand, is a critical point. Yet, without field journalism, journalism will become virtual,” Özkır added, underling that journalism had already started for some time and reached now its peak with the obligatory isolation process.

All problems that come along with virtualization, will also have their reflections on journalism. This could pose problems in accessing sources, confirming news and security, that is why the media nowadays has to undergo a sensitive process since the use of the internet and technology is enhancing by the day.

“The usage of technology in journalism has reached about 90%. Those that invest in mobile tools will take part in future media. Those who cannot keep the pace, on the other hand, will vanish,” Acar added.