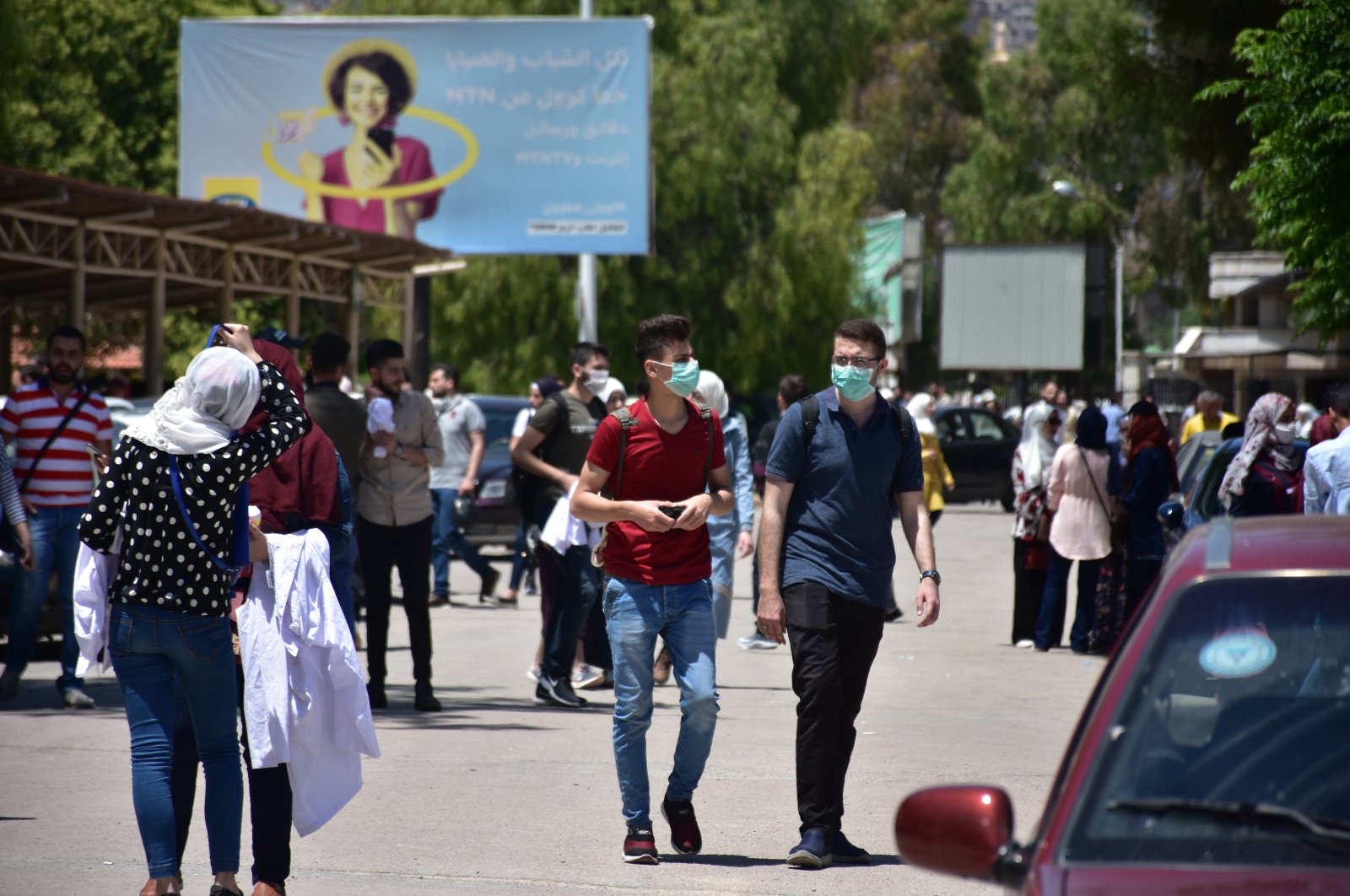 According to the Jusoor for Studies institute, the Bashar Assad regime is concealing the real number of coronavirus cases from the public as research has identified five times more cases than Damascus has confirmed

Although the Syrian regime took a big step and loosened measures put in place to slow the spread of the coronavirus despite a rising number of cases, a monitoring group has said the real virus toll of the war-torn country is much more worrying than the officially announced statistics since Damascus has covered up the real data.

So far, the Bashar Assad regime has announced about 128 coronavirus cases in Syria. According to the Jusoor for Studies institute, however, this number is far from reflecting the truth. Documenting 582 cases through their own private monitoring network all around the country so far – a figure almost five times more than what the regime claims – the institute states even this number may be falling behind the true data.

"We believe in the center that the number of infections with coronavirus in the areas of the Syrian regime is much bigger than what has been announced by the Ministry of Health of the Syrian regime, who only announced about 128 cases, and even more than the number that our center was able to document," said Mohammed Sarmini, head of Jusoor for Studies.

According to Sarmini, the regime has adopted a "security method" in dealing with this health issue by "obfuscating and hiding the real numbers of casualties without taking any real measures capable of facing this pandemic."

After weeks of denying the existence of the virus within the country, the regime introduced a series of confinement measures in March to stem the spread of the virus. The Syrian regime loosened coronavirus lockdown restrictions on May 26 by canceling a nighttime curfew, allowing travel between provinces and announcing a reopening of mosques. The decision came as the war-torn country grapples with a crippling economic crisis and official cases of the COVID-19 respiratory disease continue to rise. Syria's borders, however, remain closed. The regime initially started to gradually loosen restrictions in as early as April.

Despite loosening the measures, the regime postponed its elections twice due to the pandemic, and Assad himself even warned of a "catastrophe" if the easing of lockdown measures is mishandled.

"Although the numbers are limited, this doesn't mean they can't explode suddenly in a matter of days or maybe weeks," he said in a video shared on the regime's social media channels.

"Also, the regime does not officially announce the number of polymerase chain reaction (PCR) examinations it performs, and it is expected that they will be very few, and do not exceed 5,000 examinations so far," he said.

This is not the first time the regime has been accused of covering up the data on the country's outbreak performance.

Back in March, the head of a local Damascus-based nongovernmental organization said there was limited capacity to determine cases, with only one main lab testing for the virus so far. Some cases were being treated in military hospitals, the person added, asking to remain anonymous.

Since the beginning of the pandemic, it is believed by many pundits that the virus was likely more widespread than known, owing to low testing capacity and the lack of transparency.

U.N. humanitarian chief Mark Lowcock also told the U.N. Security Council in April that while the number of cases in Syria may sound low compared to other countries, testing is very limited.

The Syrian regime has conducted coronavirus tests only in Damascus’ central lab, making it hard to track infections. For instance, the areas under the control of the YPG/PKK home to 4 million people have had to send samples by plane to the capital.

The Syrian Observatory for Human Rights, a Britain-based war monitor, also said back in March that doctors had received threats from the regime not to disclose cases. "Doctors have been instructed to refer to cases that are suspected to be corona infections as severe pneumonia," said its director Rami Abdulrahman.

"We are sure the cases in Syria are way more than what the regime is announcing, as well as Syria is taking no measures to deal with the pandemic; even when they decided to do a quarantine for the new arrivals, they failed due to the bad conditions they put the people in," said Asaad Hanna, an expert on Syria who is affiliated with Jusoor.

In order to collect their data on the coronavirus cases, Jusoor follows the method of communicating with medical staff in hospitals and health centers under the regime’s control and directly accessing infected persons or their relatives who clearly showed symptoms of the disease.

"The health system in the regime-controlled areas is dilapidated. According to a study released on March 26 by the Syria team in the conflict research program at the London School of Economics and Political Science (LSE), the maximum number of new coronavirus infections that can be treated in Syria is estimated at approximately only 6,500 cases," Sarmini underlined.

Apart from covering up the numbers, the Syrian regime continued to commit multiple crimes in March and April, the same months seeing the rapid spread of the COVID-19 pandemic, according to a watchdog report last month.

"The Syrian regime killed 44 civilians, including six children, in March and April 2020, and its forces arrested 156 people and committed at least four attacks on vital civilian facilities, including two schools," the Syrian Network for Human Rights (SNHR) said in a report.

Asserting that Russia and China are helping the Assad regime by providing relief, the report called on Russian, Chinese, Cuban and Iranian governments to provide medical and humanitarian assistance in the fight against the coronavirus rather than the current military support.

It also underlined the need to increase material support for local relief groups in areas outside the control of the Assad regime amid the pandemic.

Syria's health infrastructure has been in a worrying condition for years due to the war. Hundreds of medical facilities have been bombed, mostly in regime airstrikes; half the hospitals and health centers are functioning only partially or not at all, while 70% of the medical personnel have fled the country. More than 80% of the population live in poverty, millions have been displaced and hundreds of thousands are crammed into overcrowded camps.

A total of 855 medical personnel have been killed since the civil war erupted in Syria in 2011, according to the SNHR last month. A report released by the group presents the most remarkable challenges faced by medical personnel and detainees in Syria amid the spread of the coronavirus.

Of these 855 fatalities, Syrian regime forces killed 669, while Russian forces killed 68 and the Daesh terrorist organization killed 40, the report said.

At least 3,353 detained medical personnel are awaiting their release, 3,327 of them jailed by the Syrian regime, the watchdog said.

According to the report, "perpetrator" parties in Syria conducted at least 860 attacks on medical facilities between March 2011 and May 2020, 87% of which were committed by the Bashar Assad regime and Russia.

As the situation in Syria reached concerning levels, humanitarian agencies have made a series of calls over the past couple of months to the international community and the regime to be alerted on the possible outcomes. Nearly 8 million Syrians are food insecure and vulnerable to COVID-19, the World Food Programme (WFP) said last month.

Moreover, close to a million people have been internally displaced in the war-ravaged country since December 2019, said the agency's spokeswoman Elisabeth Byrs in video briefing from Geneva.

"They now live in overcrowded camps where an outbreak of COVID-19 could have devastating impact consequences," she added.

In order to tackle the pandemic in the war-torn country, the U.N. agency and its partners have been implementing COVID-19 mitigation measures such as encouraging hand-washing and raising awareness on social distancing at food distribution points.

However, Lowcock told the U.N. Security Council that with millions of people displaced in crowded conditions and without adequate sanitation, he said Syria can’t be expected “to cope with a crisis that is challenging even the wealthiest nations.”

Efforts are being made to set up isolation areas in displacement camps and health facilities in Syria, but measures aimed at containing the virus are already having side effects such as skyrocketing food prices in some areas, he said.

Currently, 2 million people in northeast Syria are without the medical supplies needed to tackle the coronavirus due to restrictions on aid deliveries, the Human Rights Watch warned in April. Besides, aid groups have been unable to deliver crucial supplies from Iraq to northeast Syria since the U.N. Security Council halted humanitarian access through that border crossing in January due to pressure from Russia.

In the last opposition stronghold in Syria’s northwest, however, health officials are cobbling together what little they have to protect 4 million people crammed into a territory which was buckling under repeated regime offensives until a cease-fire was reached in March.

Currently, there is a single PCR machine at Mohamad Shahim Makki's medical center in Idlib province, which is the only alarm that will sound when the coronavirus strikes a population of millions of the world's most vulnerable people.

Makki's Epidemiological Surveillance Laboratory has the only device in areas outside of Syrian regime control equipped to run a PCR test to detect the virus.

The machine "is not sufficient to serve all these people, so there is pressure on the device. And since it is the only one, strict criteria are being used to select samples," said Makki to Reuters in April.

Turkey has become one of the few countries that have been providing constant medical and humanitarian aid to the region during the outbreak while calling on the international community to act in the same manner.

Hanna stated that in northwestern Syria, the Turkish government supplied the local civil society with test kits and all the tests which were done came back negative. According to Hanna, this was mostly because the region is basically a protected area with no gates opening to the regions under regime control.

"So," he said, "it's less possible to have corona in there. But it can still happen, and if it happens then it would be a catastrophe."

Turkish Foreign Minister Mevlüt Çavuşoğlu urged the international community to aid Syrians last month amid diminishing relief efforts because of the pandemic. Çavuşoğlu said Turkey is the main source of aid, and the pandemic is making efforts "more difficult" in Syria.