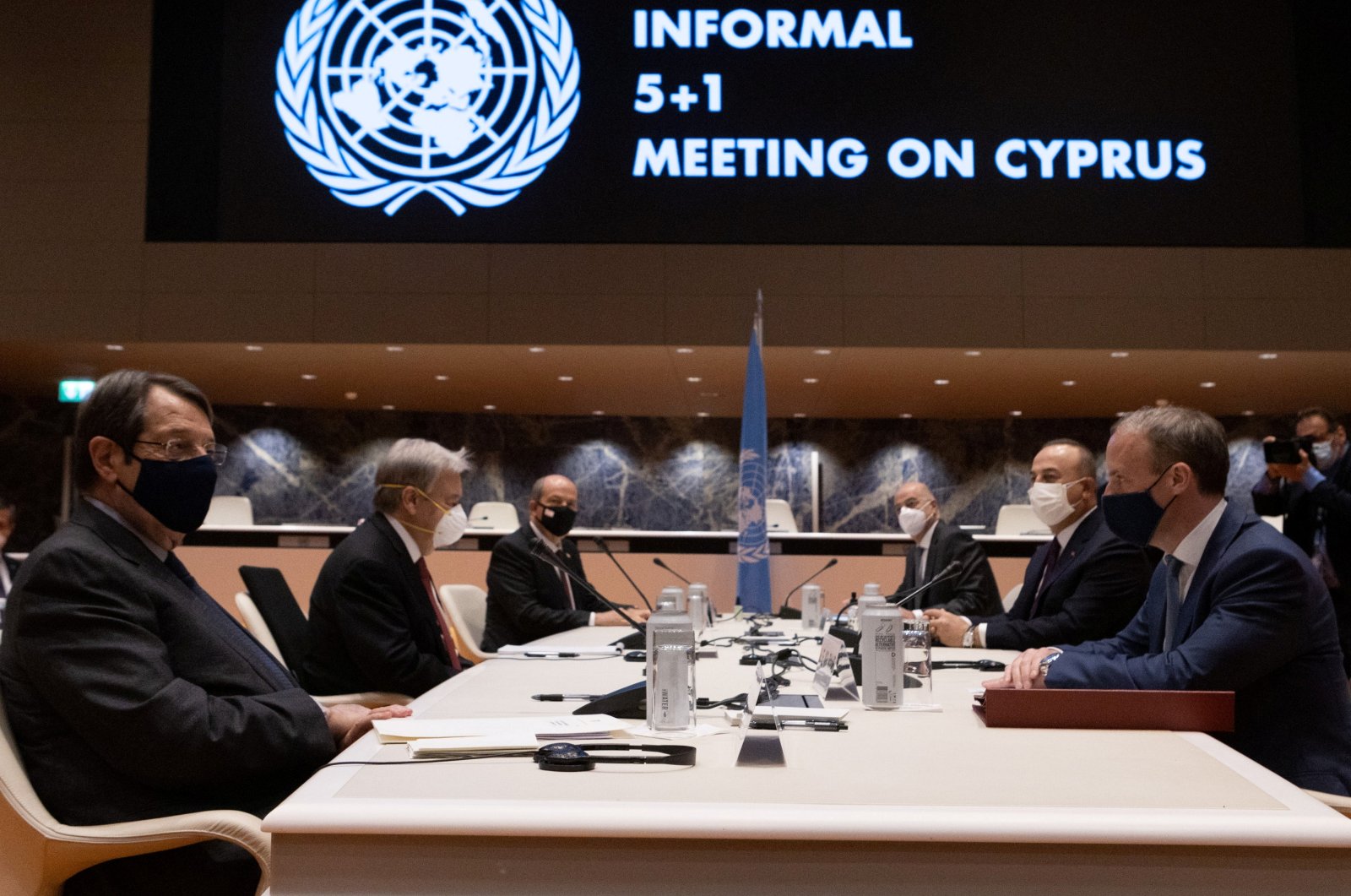 Last week's unofficial U.N. 5+1 meetings in Geneva marked an important milestone for the negotiation of a two-state solution in Cyprus. While no concrete solution was expected to come of the informal meeting, the first in which all parties were seated at the table in four years, it proved fruitful for Turkey and the Turkish Republic of Northern Cyprus (TRNC), a fact confirmed in Ankara and Lefkoşa's (Nicosia's) initial positive messages.

During the meetings, the Turkish side seemed absolutely determined to regain its rights, which have been usurped for 53 years, as the natural and legal partner of the island.

Turkey and the TRNC sat at the table and uncompromisingly and unconditionally called for a two-state solution on the island. In other words, Ankara and Lefkoşa have already announced to the world that they will negotiate a formula based on cooperation between the two existing states on the island in which the sovereignty and international status of the Turkish Cypriot people are equally defined. The Turkish side believes that only under these two conditions can a realistic, sustainable two-state solution be implemented on the island and pave the way for negotiations.

Looking to further understand the TRNC's requests, it is clear that Lefkoşa will no longer sit at the table and discuss options like a confederation or federation. There are many indications that the Turkish side is right to be concerned. Even politicians from the United Kingdom, a guarantor of the talks, not just Ankara and Lefkoşa, agree with the Turkish Cypriots. British politician and jurist Michael Stephen, who was also an adviser to the founding president of the TRNC, Rauf Denktaş, expressed this issue. Stephen noted that there is no one that the TRNC and Turkey can trust in Geneva based on past experiences and that the best way to solve the Cyprus problem is the "two-state model."

Furthermore, Ambassador Jean-Paul Carteron, president of the Crans-Montana Forum, where international political negotiations are being held in Switzerland, said on Twitter on April 28, “We are not anymore in 1815 Vienna! We cannot redesign the World with a Pen and scissors! 80% Turkish Cypriots are born in Cyprus after 1974! None can challenge the fact that they are a nation and a country,” he said.

As all the facts show, the Greek Cypriot side has been unfair when presented options, refusing a two-state solution despite the fact that the federation that lasted for decades has managed to resolve nothing.

We are not even talking about the attempts by the Greek Cypriot to forcefully relocate Turkish Cypriots, seizing their assets and force them into ethnic enclaves in outright violations of the 1960 agreement and the constitution. The guarantee agreement signed in the same year actually strictly prohibited Cyprus from participating in political and economic organizations, such as European Union, that Turkey and Greece were not both members of. Despite this, Greece became the union member in 2004, and this process sabotaged the two-state solution on the island.

Moreover, the Greek Cypriots rejected the Annan Plan referendum, which was seen as an U.N.-backed opportunity to resolve the Cyprus issue in 2004. While the Turkish Cypriots accepted the plan by 76%, Greek Cyprus rejected it by 65%.

Despite all these facts, the Greek side has never been open to power-sharing or giving the Turkish Cypriots political equality since then. The EU leadership of the period also signed a historical injust law in favor of the Greek side of the island, which has carried the problem through to the current day.

Finally, in 2017, the parties were supposed to meet in Crans-Montana but Greek prime minister at the time, Alexis Tsipras and the Greek Cypriot administration did not attend the meeting, citing Turkey's military presence on the island, ignoring the fact that the country is the actual guarantor of the TRNC.

Throughout the years, the Greek side, which to do this day maintains the same uncompromising attitude, has claimed to be the sole legitimate representative of the island for almost half a century. In addition, the Greek Cypriot administration joined the EU on May 1, 2004, contrary to the bloc's basic principles. In this way, for the first time in the history of the EU, a state was able to become a member of the union, claiming sovereignty over territory outside its borders and not under its control. This had led the Greek Cypriot administration to represent itself internationally as the so-called "only legitimate government for the whole of Cyprus." This attitude and the methods of the Greek side has prevented the TRNC from being recognized in the international arena.

On the other hand, once we take a closer look at the Turkish side, Lefkoşa seemed to have waited patiently up to now in the face of all the rights violations it has been subjected to by the Greek Cypriots, the EU, U.K. and international community.

In this context, the two-state solution proposed by the Turkish Cypriot administration is seen as the only solution to date that will end the violations of the rights of the Turkish side and compensate them.

Now, after this painful history, Ankara and Lefkoşa are not expected to abandon their joint strong position on the issue and make any concessions. The Turkish side will not accept a proposal based on a federal solution or a confederation. TRNC President Ersin Tatar presented a six-point statement to U.N. Secretary-General Antonio Guterres during the talks that outlines in great detail all the conditions of the desired two-state solution in contrast to other possible options and offers.

Now the Turkish side at the table wants a solution based on "two sovereign states with equal rights," rather than a federation. Turkey fully supports the TRNC's stance as President Recep Tayyip Erdoğan and Foreign Minister Mevlüt Cavuşoğlu have reiterated. According to Ankara, the reason for this changing status quo is due to the Greek side having a tendency to not share the management of even the water and electricity administrations. TRNC President Ersin Tatar, confirms that there is greater and wider international support than ever before for a "two-state solution." Tatar also objects to the EU's participation as an observer in subsequent negotiations, fearing that it will not be neutral.

Another important reason why the Turkish side is strong in the negotiations is the important and critical role that Turkey plays in the geopolitics of the Eastern Mediterranean. At the same time, agreements signed by Turkey and the TRNC allowing for the conduct of hydrocarbon activities on their continental shelf is another factor, which indicates the new dynamics. These changing conditions have been forcing countries to maintain their effectiveness in the region, especially the U.K., and to contribute more to the solution. This also makes the “two-state solution” the only realistic and sustainable solution to compensate for the losses of the TRNC to date, allocating all parties equal status in all senses.

Now eyes will look to a fresh 5+1 meeting to be held in the next two to three months. U.N. Secretary-General Guterres seems keen on this. If the Greek Cypriot side continues its non-conciliatory stance under the pretext of the issue of Varosha (Maraş), the joint hydrocarbon research of the TRNC and the presence of Turkish army on the island, the talks will enter a familiar deadlock.

And it would not be wrong to say that this unilateral attitude of Greek Cypriots will continue to be fueled by Greece along with it. If the U.N. and the other guarantor country, such as the U.K., do not recognize the TRNC as a state of equal status, the Turkish side will try its own methods and accelerate its steps internationally. The next period will be also a period where the U.K.’s sincerity will also be tested to reach a sustainable solution on the island.

Speaking to Dilara Aslan from Daily Sabah, TRNC Foreign Minister Tahsin Ertuğruloğlu also confirms these views. He said that the main reason for the failure to reach an agreement over 53 years of negotiations is that the Greek side, despite all the agreements, considers itself to be the sole legal heir of the Republic of Cyprus. “After the international community gave this recognition to the Greek side, the world actually ensured that the Cyprus issue could not be reached through negotiations," he stressed. Recalling that a new and healthy vision has now been put forward for the first time after the process in Crans Montana in 2017, Ertuğruloğlu stressed that negotiations should be between the parties on the island rather than intercommunal negotiations.

Now, in light of all these developments, in the absolute projection, Turkey and the TRNC will not compromise on the two-state solution on the island, under any condition. In the face of this attitude, the U.N. and the international community, especially Greece and the U.K., will need to follow a new road map for a solution and reverse their potential plans based on a confederation or federation.