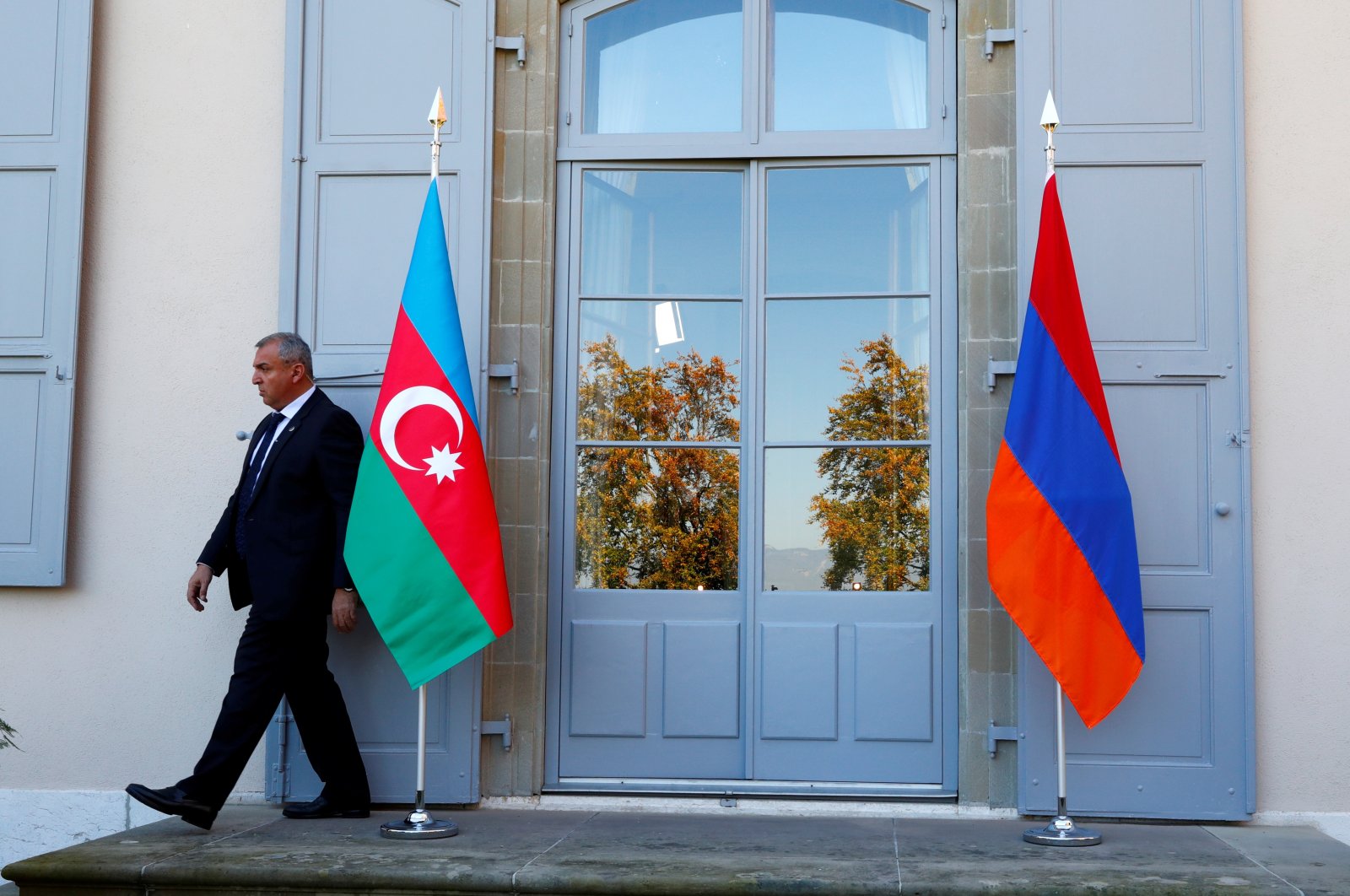 A security guard walks past an Azerbaijan (L) and Armenian flag at the opening of talks of the Organization for Security and Co-operation in Europe (OSCE) Minsk group in Geneva, Switzerland, Oct. 16, 2017. (Reuters Photo)
by Dilara Aslan - Nur Özkan Erbay Oct 06, 2020 3:16 pm
Edited By Dilara Aslan

Fearing an all-out war between the two countries in the South Caucasus, the international community is closely following developments as well as calls from the Minsk Group, which so far has been absent, dysfunctional and biased in its role of solving the crisis

The resumption of deadly fighting between Azerbaijan and Armenia has turned the international community's attention to the Organization for Security and Co-operation in Europe (OSCE) Minsk Group, which is tasked with solving the crisis and on which the international community relies to steer both countries toward a path to peace. Yet, while Russia's silence has been deafening and the U.S. has been widely absent, France has fanned the flames of conflict through statements of support for Yerevan and accusations toward third parties instead of providing a solution.

Thirty years of negotiations and attempts by the Minsk Group’s three co-chairs – France, Russia and the U.S. – to convince Armenia to withdraw from occupied Azerbaijani territories peacefully have led to no progress as experts describe the trio’s diplomacy as dysfunctional and biased.

“The behavior of French President (Emmanuel) Macron and Russia, in general, has surprised many observers of the Nagorno-Karabakh conflict over the past week. As for the French president, he seems to be continuing his anger toward President (Recep Tayyip) Erdoğan and Turkey that first began to surface last year around October,” Matthew Bryza, a former U.S. co-chair of the Minsk Group and former U.S. envoy to Azerbaijan, told Daily Sabah.

Bryza noted that relations between the two NATO allies soured when Macron called the transatlantic alliance “brain dead” after U.S. President Donald Trump seemed to accept Erdoğan’s request to move Turkish troops into northern Syria in an operation to secure its border from terrorism.

“Since then, Macron has been highly critical of President Erdoğan and Turkey, whether it be in Syria, Libya or the Eastern Mediterranean and now Azerbaijan. His full tilt toward Armenia makes it very difficult if not impossible for France to remain an impartial mediator as a co-chair of the Minsk Group. So, the Minsk Group is in big trouble,” Bryza said.

Macron last week voiced support for Yerevan in Latvia's capital Riga during a visit to the Baltic European Union state, saying, “I say to Armenia and to the Armenians, France will play its role."

Speaking to Daily Sabah, journalist Sevil Nuriyeva Ismayılov said that there is a plan by France to pull Turkey into the events through Armenian Prime Minister Nikol Pashinian.

“In such a plan, Armenia will occupy new territory, and this violation will be met with anger by Turkey and lead to Turkey’s response, which would be opposed by Russia and result in a clash between Moscow and Ankara despite consensus on Libya and the Eastern Mediterranean,” Ismayılov pointed out, describing this as France’s strategy.

She suggested that France believed Turkey and Russia would confront each other, yet has been met with Azerbaijan’s statements insisting on Ankara’s presence at the negotiating table as a principle condition. “As Ilham Aliyev underlined on Monday, there is no way that Azerbaijan will sit down with anyone without Turkey,” she said.

The trio late Monday stated that the escalating conflict between Armenia and Azerbaijan over the occupied Nagorno-Karabakh represented an "unacceptable threat" to the region's stability.

The three countries' foreign ministers in a joint statement condemned "in the strongest terms the unprecedented and dangerous escalation of violence," adding that attacks allegedly targeting civilian centers "constitute an unacceptable threat to the stability of the region."

"The ministers call once again upon the conflicting parties to accept an immediate and unconditional ceasefire," the statement said.

Meanwhile, the U.S. on the same day condemned the escalation of tensions immediately and urged a halt to the fighting, reiterating its call to cease all hostilities.

However, statements, calls and appeals for peace have remained insufficient in the absence of a permanent solution to the decadeslong conflict.

The Nagorno-Karabakh region, internationally recognized as part of Azerbaijan, has been controlled by predominantly Christian Armenian separatists since the conflict broke out during the disintegration of the Soviet Union in 1991. The latest flare-up began on Sept. 27, when Armenian forces targeted civilian Azerbaijani settlements and military positions, leading to casualties and making peace seem to be a distant notion. Both countries declared states of war and mobilized their troops.

Regarding Russia’s role in the conflict between the two former Soviet nations, Bryza stated that Moscow “actually is behaving like a co-chair; it is being impartial; it is calling for both sides to stop shooting and come to negotiations with no preconditions.”

“That is a surprise to many Armenians because they expect strong support by Russia, and they have always depended on Russia as a key ally for a couple centuries,” he said, adding that knowing Moscow is Armenia's ally as part of the Russian-led security bloc, the Collective Security Treaty Organization (CSTO), Yerevan expected greater backing.

Russia has a military base in Armenia, considers it to be a strategic partner in the South Caucasus region and supplies it with weapons.

Bryza explained that although this treaty obliged Russia to come to Armenia’s defense in times of need, it is only binding when Armenian territory is attacked, “which is not the case now as Azerbaijan’s territory is being fought over.”

Ismayılov said it is necessary to read Russia's point of view through the relationship between Pashinian and Russian President Vladimir Putin.

“Pashinian had been trying to hinder Russian influence from the day he arrived, which was met with serious objections by the Kremlin, causing comments beyond criticism on Pashinian in the Russian media,” Ismayılov elaborated.

Ismayılov underlined that Russia objects to increasing anti-Russian structures around it, and therefore, in the face of the violation of the borders of Azerbaijan, Moscow indirectly supports Baku.

“On one hand, Russia gives a lesson by not supporting Pashinian openly; on the other hand, it tries to prevent an uncontrolled instability in the region that could cost Russia,” she added.

Saying that Russia behaving even-handedly in the current conflict is putting pressure on Pashinian, Bryza highlighted that the Armenian prime minister is the embodiment of Putin’s fear as “a popular person who comes to power through a peaceful uprising and who overthrows the old regime and the old political and economic system, which was heavily dominated by Moscow.”

“Putin’s great fear is that the same thing could happen to him in Russia,” he underlined.

Putin has been facing mass protests at home over the summer against constitutional reforms that give the Russian leader the option to remain in power for another 16 years while he faced increasing criticism in the international arena for the poisoning of Kremlin critic Alexei Navalny with an internationally banned nerve agent last month.

The U.S., on the other hand, appears absent in this latest crisis.

“The U.S. role has been quite limited so far, simply calling on both sides to stop fighting and get back to negotiations,” Bryza said, noting that the country has been largely absent diplomatically from the South Caucasus since the George W. Bush administration. “The (Donald) Trump administration is, unfortunately, continuing that. At the end of the day, the U.S. is needed at the highest political level to be active or at least look interested in what the Minsk Group is doing for the group to take the role it is supposed to play,” he stressed.

No solution to the latest ignition of fighting and the decadeslong problem lying behind it is in sight as Armenia continues its provocative war-rhetoric and Azerbaijan pledges to press on until all Azerbaijani territory is taken back.

In a broadcasted interview with Al Jazeera last Saturday, Azerbaijani President Ilham Aliyev criticized the Minsk Group, saying that one reason behind the current fighting is that “the mediators do not insist or exert pressure to start implementing the resolutions of the United Nations Security Council.”

“We have no time to wait another 30 years. The conflict must be resolved now,” Aliyev said.

Bryza said that Russia’s role could be essential in the upcoming days of the conflict. “I do not expect Russia to intervene in the fighting. I think there will come a time when Azerbaijan has recovered enough of its own territory in Nagorno-Karabakh and seven surrounding regions that it will be sufficient politically to satisfy Baku, and it will be time to return to the negotiating table to figure out what the ultimate legal status of Nagorno-Karabakh itself will be," he said.

Bryza underlined that when the time is ripe for negotiations, Russia could play a significant role while Turkey could encourage Baku “to be satisfied with their gains up to that point and to return to negotiation again about the future of Nagorno-Karabakh and about the full withdrawal of all Armenian troops.”