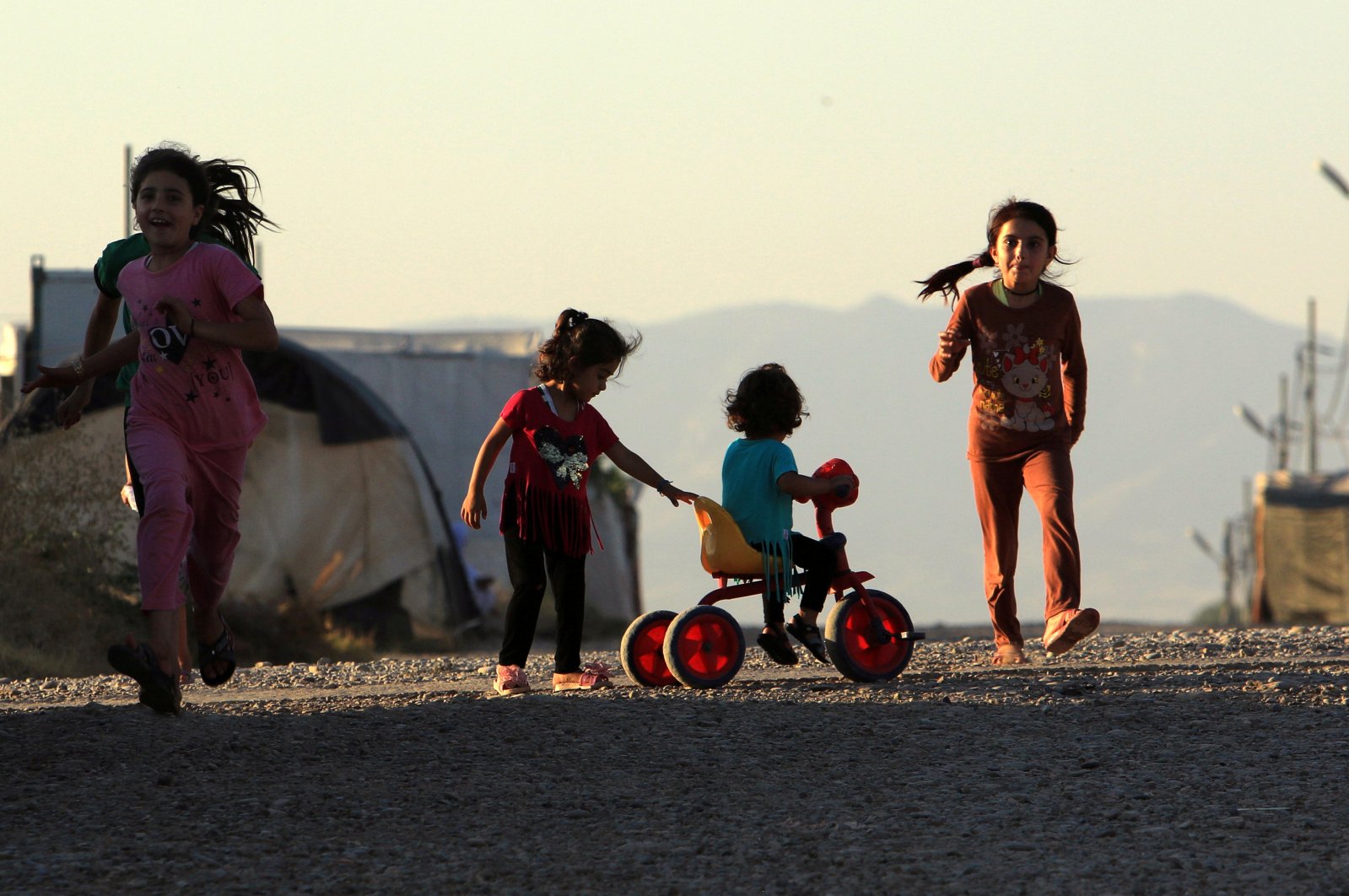 Displaced Iraqi children from the minority Yazidi sect, who fled the Iraqi town of Sinjar, play at the Khanki camp on the outskirts of Dohuk province, July 31, 2019. (REUTERS Photo)
by Eralp Yarar Oct 18, 2020 10:58 am

Despite underlining the importance of Baghdad-Irbil cooperation for the security and governance of Sinjar, experts also expressed doubt about the implementation of the deal in practice

The Sinjar agreement recently signed between the Iraqi central government and the Kurdistan Regional Government (KRG) has the potential to facilitate the removal of the PKK presence in the region and return the displaced Yazidis to their homeland, experts said – though they also expressed doubt about the implementation of the deal in practice.

Speaking to Daily Sabah, Tuna Aygün, a research assistant at the Center for Middle Eastern Studies (ORSAM), said the deal’s significance for Turkey is that it has the potential to remove the PKK terrorist group’s presence in Sinjar.

“If the deal works, the closest PKK base to Turkey will be emptied without any military effort or intervention by Ankara,” he said, adding that the deal does not specify how this will be implemented in practice.

Mehmet Alaca, a journalist at Anadolu Agency (AA), noted that the PKK self-declared a canton in Sinjar in January 2015 and since then has tried to expand its activity zone through the disputed areas between the Iraqi central government and the KRG.

“The PKK has used this policy since 2014 when it was deployed in the area. It has caused tensions with the Irbil administration to escalate, and many Yazidis who wanted to return to their homes after the region was saved from Daesh now struggle for their lives in refugee camps,” he said.

Ankara has said that it will not allow Sinjar to be the “second Qandil,” Alaca pointed out, referring to the Qandil Mountains in northern Iraq near the Iraq-Iran border, which has operated as a headquarters for the PKK for decades.

“Baghdad, who reacted against Turkey’s operations against PKK targets in northern Iraq, signing a deal that aims to end the PKK’s presence in Sinjar strengthens Ankara’s policy toward the region,” he said.

Alaca noted that the deal is important for Turkey because this is the first time Irbil and Baghdad have cooperated on such a promise.

On Oct. 9, the Iraqi Prime Ministry announced it reached a "historic deal" with the KRG, an agreement that will bolster the Iraqi federal authority in Sinjar under the constitution in terms of governance and security.

The Iraqi prime minister's spokesperson, Ahmed Mulla Talal, said in a Twitter statement that the agreement will end the authority of intruding groups in Sinjar, referring to the PKK.

The next day, the Iraqi parliament said the settlement agreement between the Iraqi government and Iraq's KRG on the status of the Sinjar district will accelerate the return of displaced people.

"The agreement will directly contribute to accelerating the return of the displaced families to their homes and ensure their stability in their areas," said Bashir al-Haddad, the deputy speaker of the Iraqi parliament.

Al-Haddad stressed the importance of joint management between Baghdad and Irbil in dealing with the security of Sinjar along with the coordination of public services and the reconstruction of infrastructure.

Regarding the return of Yazidis, Alaca said: “Although the PKK was partially supported by Yazidis, most Yazidis who fled Sinjar could not return home due to the presence of the group in the region. Also, considering a significant part of Yazidis has close contact with the Irbil administration, the PKK’s effect on the field will be narrowed if Yazidis can return following the implementation of the deal.”

Aygün also said that they can return if the PKK is really removed from the region.

“However, we should also underline that an initiative for the reconstruction of Sinjar is needed. There is a very big burden on Iraq’s economic budget. Without reconstruction, the Yazidis’ return will be very difficult even if the PKK is removed,” he explained.

When we look at Turkey’s role and effect on the deal, Aygün noted that Turkish officials have long conducted diplomatic efforts against the PKK’s presence in the region, and this issue has been put forward in diplomatic talks with Iraqi officials. Turkey’s direct effect or role on the deal is debatable, he said but added that at least these efforts will see positive results.

As Aygün stated, Alaca also said that we can talk about Turkey’s indirect effect rather than a direct role.

“Turkey occasionally conducts airstrikes on the region by describing Sinjar as the second Qandil. Ankara’s pressure might have affected the government in Baghdad. Iraq may not want its relations with Turkey to be further damaged because of the PKK, which also damages itself,” he explained.

Alaca reiterated that relations between Turkey and Iraq were strained in August when Turkey conducted cross-border operations targeting the PKK bases in northern Iraq.

“Considering Turkey’s invitation for Iraqi Prime Minister Mustafa Al-Kadhimi to visit Ankara, Baghdad’s move of the Sinjar deal can be regarded as an olive branch to Ankara.”

Alaca also added that Ankara’s declaration of being ready to cooperate and support stability and the war on terror following the Sinjar deal demonstrates that Turkey maintains its policy of not allowing Sinjar to be the second Qandil.

If Baghdad and Irbil are sincere about implementing the deal in practice, this will positively affect their relations with Turkey and mutual visits can focus on the joint steps against the PKK presence in Sinjar, he said.

Regarding the Ankara-Baghdad and Ankara-Irbil relations, Aygün also said we can expect the deal to positively impact bilateral relations.

“In addition to Turkey’s own national security concerns, Ankara also underlined the importance of Iraq’s territorial unity. The deal is also important in this aspect,” he said.

Following the deal, the Turkish Foreign Ministry said in a statement that it hoped the agreement would be carried out in a way that enables the reinstatement of Iraqi authorities' control in Sinjar, the eradication of Daesh and PKK terrorist organizations and their extensions in the region, and ensure the safe return of Yazidis and the other people of the region who have been subject to grave oppression and persecution, first at the hands of Daesh and then by the PKK.

“On this occasion, we once again reiterate our readiness to cooperate with the Iraqi authorities to ensure stability and counterterrorism in Sinjar as well as in other regions of Iraq where the terrorist organization exists,” it added.

Turkey was not the only country that expressed its positive messages following the announcement of the deal.

Washington also expressed approval of the Sinjar deal. State Department spokesperson Morgan Ortagus said in a written statement that the U.S. is pleased about the joint steps taken by the Iraqi government and the KRG for resolving the political and security issues in Sinjar.

She also expressed Washington’s hope that the deal will accelerate the conditions for the revitalization of Sinjar and will enable the safe and voluntary return of those displaced by the Daesh terrorist group.

British Ambassador to Iraq Stephen Hickey reiterated his country's support for the deal during a meeting with KRG Prime Minister Masrour Barzani in Irbil.

According to a KRG statement, Hickey said the deal was a step toward achieving stability and reconstruction in the district to facilitate the return of displaced families to their homes.

Despite the positive aspects of the deal, analysts also expressed doubts about the deal.

Alaca noted that the PKK objects to the deal by saying that its “autonomous council” was not included in the deal. In fact, the PKK fears that its activities in the region will end and its presence in northern Syria will also be threatened, he explained.

Aygün also noted a negative point about the deal: the risk of the PKK’s recognition as a legitimate political actor by Iraq due to the negotiations between them. According to Aygün, one of the most important points is that it does not define which PKK elements the deal covers.

“It is unclear whether the deal refers to all actors, including subgroups under the umbrella of the PKK or a specific actor under that structure. If one specific group is removed from the region, the group’s actual presence will continue,” he said.

Accordingly, how the PKK will be defined is very important. If a narrow definition is implemented, the deal has the risk of recognizing the PKK as a so-called legitimate actor and institutionalizing the presence of some PKK elements in the region, Aygün said.