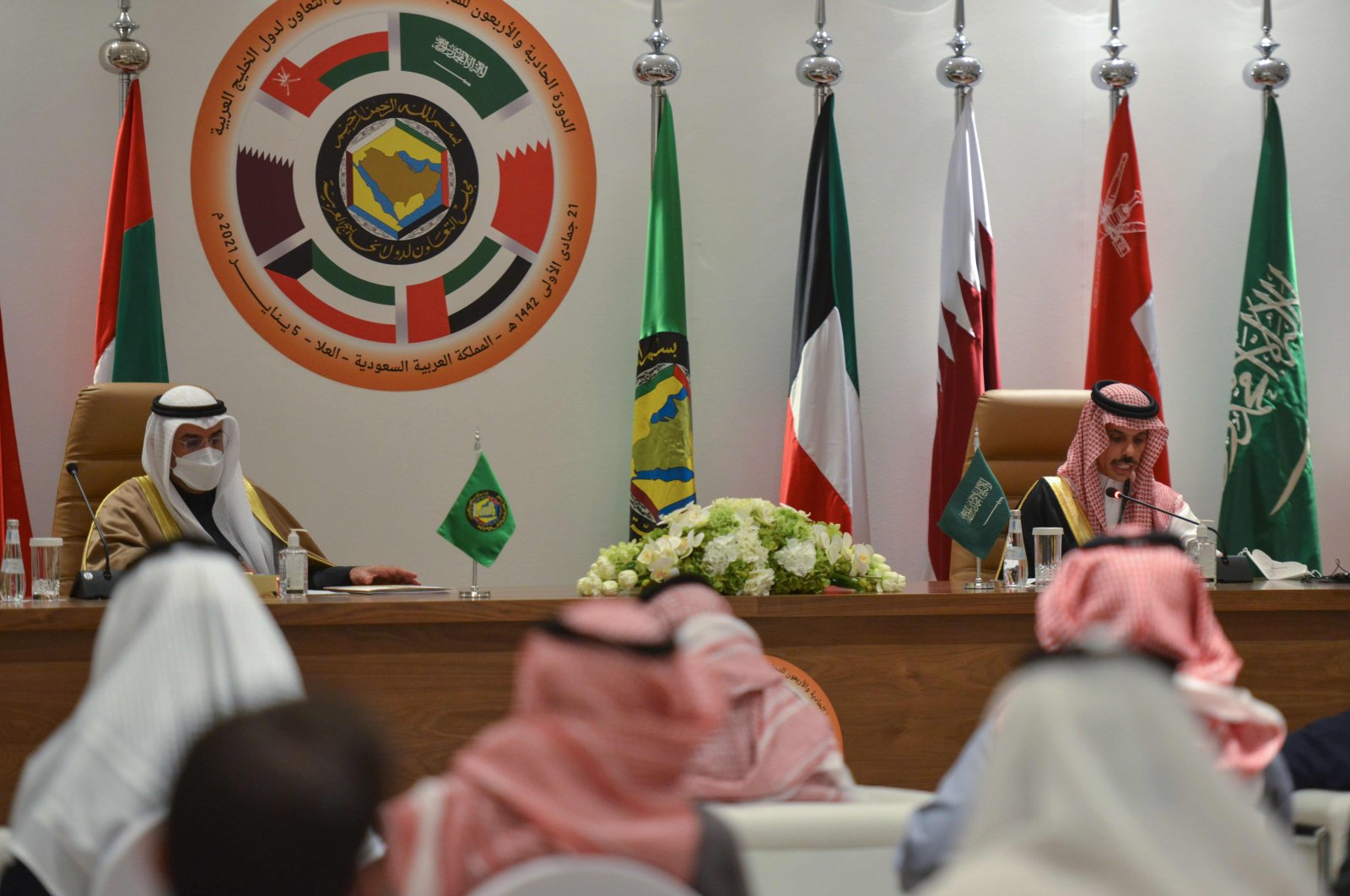 A process of healing has started as Gulf leaders sealed a pact aimed at ending a yearslong feud with Qatar, which could benefit Turkey’s relations with the bloc and the region as a whole, experts say

The resolution of the Gulf row could contribute to Turkey mending fences with other Arab states and ease regional tensions. An end to the bitter rift that saw Qatar boycotted by its Gulf Arab neighbors for 3 1/2 years was declared and signed, opening a new page in Middle East relations.

“Turkey would be one of the most benefitted countries in the region from the reconciliation. Better Saudi-Qatari relations also means a better Saudi-Turkish relation,” Ali Bakir of Qatar University’s Ibn Khaldon Center told Daily Sabah, saying that the recently announced detente would help bridge the gap between Turkey and other Gulf Arab states.

Highlighting that differences in other issues would prevail, Bakir stated that the reconciliation “would help the Saudi-led block to communicate with Turkey in a constructive manner.”

On the other hand, Mahjoob Zweiri, director of the Gulf Studies Center at Qatar University, told Daily Sabah that the settlement between Qatar and other Gulf states would not impact Ankara and Doha’s associations.

“Relations developed in the context of a strong alliance. Therefore, I think it will remain like this and maybe even develop further. Turkey has not developed its relations from crises between countries, but its foreign policy was developed based on strengthening relations with neighboring countries. So, having good ties with all Arab states is beneficial for Turkey,” Zweiri stated, underlining that Turkey itself would be happy to see greater unity in the region, which would benefit it in terms of economy and investment.

Pointing out that Turkey adopted a positive approach toward the resolution of the Gulf crisis and engaged previously in efforts to ease regional tensions, Mustafa Yetim, a Gulf studies expert at the Ankara-based think tank, Center for Middle Eastern Strategic Studies (ORSAM), said that Turkey prefers the development of comprehensive relations with Gulf Cooperation Council (GCC) countries despite the United Arab Emirates' (UAE) current hostile policies toward Turkey over regional affairs.

Qatar's only land border has been mostly closed since June 2017 when Saudi Arabia, non-Gulf Egypt, the UAE and Bahrain launched a boycott and severed diplomatic, trade and travel links with the small but influential Persian Gulf country.

They accused it of supporting terrorism and meddling in their internal affairs, allegations that Doha denied.

The four nations had set 13 conditions to end the boycott on Doha, including closing Al-Jazeera TV, shuttering a Turkish military base and downgrading ties with Iran. Qatar rejected the demands.

Qatar, though taking an economic hit from the boycott, emerged from the Gulf spat resolute and largely unscathed. The diplomatic row pushed Qatar diplomatically closer to Turkey, which rushed to assist the ultra-wealthy Gulf state as it faced medical and food supply shortages in the first days of the embargo. Turkey has a military base in Qatar as both countries enjoy significant defense ties. Additionally, more than 50 agreements in several fields were signed between Ankara and Doha since the establishment of the High Strategic Committee in 2014.

Qatar will not halt or make concessions in its relationships with Turkey and Iran, Qatari foreign minister Sheikh Mohammed bin Abdulrahman said last week sharing his evaluations of the recent developments with the Doha-based Al-Jazeera news network.

The dispute was one of the most serious experienced by the six-nation GCC, comprising Bahrain, Kuwait, Qatar, Saudi Arabia, Oman and the UAE, since it was created in 1981.

Yetim elaborated that following the British withdrawal from the Gulf region in the 1970s, militarily less powerful and small states like Bahrain, the UAE, Qatar, Kuwait and Oman adopted the “strategies to counter revisionists actors in the Gulf, namely Arab nationalist Iraq, and (Shiite) Iran.” He stated that the Gulf countries, besides aiming to constrain any revisionist power in the region, sought military guarantees from substantial Western countries, including the U.S. Furthermore, Saudi Arabia aspired to be the only regional hegemonic power and “harshly reacted to the autonomy quest of other Gulf countries," Yetim added.

“In this context, Riyadh seemed to occasionally punish Qatar’s divergent regional-local policies. However, such attempts did not stop Doha’s quest for a more autonomous position in the region,” he continued, saying that Qatar and its new partners, including Turkey, tried to follow similar regional policies in an effort to balance Saudi Arabia.

“In other words, the rapprochement between Ankara and Doha started previously but became more powerful and resilient with bilateral military engagements following the eruption of the Gulf crisis which aimed to punish Qatar’s divergent policies from the Saudi hierarchy and its quest for more autonomy,” Yetim stated.

Already strained by competing ambitions for regional influence, relations between Riyadh and Ankara plunged into crisis two years ago when the Kingdom's agents killed prominent Saudi journalist Jamal Khashoggi in that nation's consulate in Istanbul.

Another Middle East rivalry also exists between Turkey and another Gulf country, the UAE. Ties worsened when Turkey backed Qatar in the 2017 crisis, while both sides support rival parties in the Libyan conflict.

Yet, with media and high-level authorities making positive statements for enhanced relations and a shifting tone following the end of the Gulf row, a new understanding is being signaled. Newspapers in the UAE and Saudi Arabia led with front-page photos of the Gulf summit and positive headlines of the rift ending.

“King Salman already took the first steps toward Ankara while UAE officials are backtracking their open anti-Turkey rhetoric at least for the moment,” Bakir pointed out. Zweiri similarly added that it was interesting to hear that the UAE’s foreign minister voiced further relations with Turkey in some media outlets recently.

UAE Minister of State for Foreign Affairs Anwar Gargash told Bloomberg on Thursday that “the UAE is Turkey’s No. 1 trade partner in the Middle East. We don’t cherish any feuds with Turkey.” Saudi Arabia, on the other hand, already gave signals of warmer ties when King Salman bin Abdul-Aziz Al Saud Salman held a phone call with President Recep Tayyip Erdoğan on Nov. 20, discussing how they could solve tense relations between the two countries while Foreign Minister Mevlüt Çavuşoğlu in the same week said he held a “sincere” meeting with his Saudi counterpart to discuss bilateral relations and regional issues on the sidelines of the 47th session of the Organization of Islamic Cooperation's (OIC) Council of Foreign Ministers.

On Jan. 4, Saudi Arabia ended its embargo and opened its airspace and land and sea borders to its Gulf neighbor. The next day, Gulf Arab leaders and a representative from Egypt gathered in Saudi Arabia and signed a declaration to effectively end Qatar's isolation.

Bahrain and Egypt, which had joined the UAE and Saudi Arabia in isolating Doha, held back from effusive statements and have yet to publicly elaborate on their pledges to ease the boycott signed in the ancient Saudi desert site of Al-Ula.

Turkey last week welcomed the outcome of the 41st GCC summit held in Saudi Arabia, which saw a reconciliation between Gulf states and reiterated the importance Ankara attaches to the "unity and solidarity" within the GCC.

"With the restoration of mutual confidence among the Gulf countries, Turkey stands ready to further develop the institutional cooperation with the GCC of which Turkey is a strategic partner," a foreign ministry statement said.

The Gulf countries recognition of Qatar’s ability to assert its sovereign independence, as well as Turkey’s regional influence, will enhance relations between Ankara, Doha and the GCC and may result in Turkey experiencing new political, economic and military engagements with other more moderate GCC countries, like Kuwait and Oman, Yetim said. He added that such increased relations “would also benefit Turkey-Egypt relations, another critical actor of the UAE-Saudi Arabia alliance.”

GCC leaders signed two documents, the Al-Ula Declaration and a final communique, described by Saudi Arabia’s Crown Prince Mohammed bin Salman (MBS) as affirming "our Gulf, Arab and Islamic solidarity and stability." He called for unity to confront challenges facing the region, singling out "the threats posed by the Iranian regime's nuclear and ballistic missile program and its plans for sabotage and destruction."

This week's breakthrough followed a final push by the outgoing Trump administration, which has been seeking to end the dispute that has troubled America’s foreign policy and defense strategy in the region and hampered the U.S. attempts to further isolate Iran. The rift divided regional U.S. security allies and frayed social ties across the Arabian Peninsula.

The Gulf feud also complicated efforts to stabilize countries reeling from years of turmoil as the parties and their respective allies vied for influence from Libya to Yemen to Syria. The conflict in Libya remains a contentious issue, with Egypt and the UAE supporting putschist Gen. Khalifa Haftar, who launched a 2019 assault on the United Nations-recognized government that is backed by Turkey and Qatar.

“The reconciliation, despite not being fully pursued by all GCC members, will have geopolitical implications and would reshape the balances in the region. It will take some time to materialize but would definitely help reduce tensions in many theaters and would allow focusing on the rising Iranian threat in the region,” Bakir highlighted.

“The real test of the reconciliation and to see how much progress it will bring is to see its impacts on regional conflicts like Syria, Libya and Yemen,” Zweiri underlined. “It remains yet to see how things will develop and whether it will have a positive impact on the stability of these countries. One of the areas we should look at is Libya.”

Reminding that Turkey has a presence and influence in the area, Yetim said: “The ongoing complicated regional issues like the Yemeni civil war, Libyan civil war and Eastern Mediterranean problem which drew in both international and regional actors, would be alleviated by possible and new diplomatic initiatives through a Gulf reconciliation involving Turkey.”

“The emergent polarization in the Gulf and shifting alliances in the GCC largely determined the power relations in the other parts of the Middle East and North Africa,” he concluded.