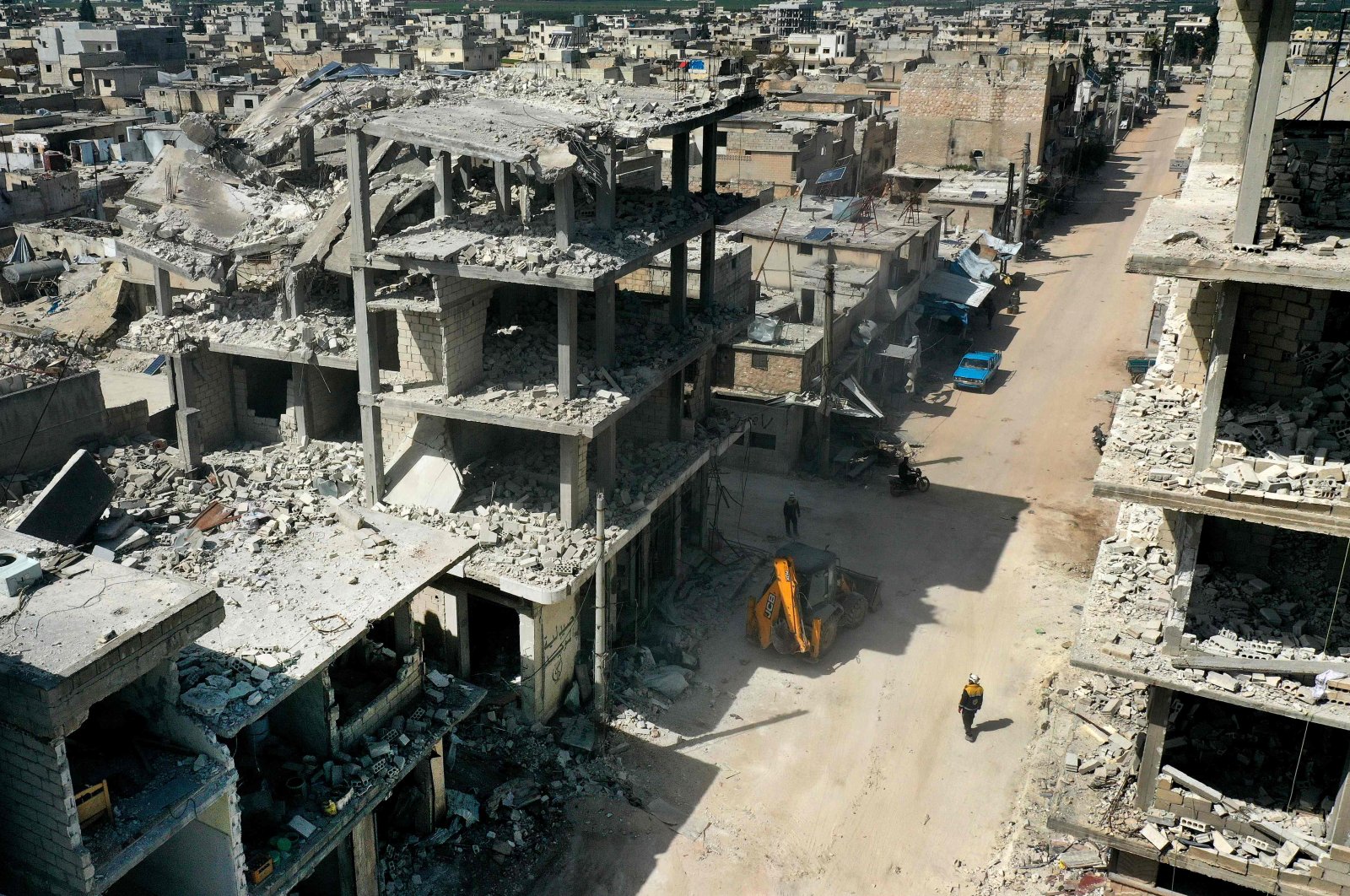 A heavily damaged street in the town of Sarmin, about eight kilometers southeast of the city of Idlib in northwestern Syria during a Turkey-Russia-brokered cease-fire, Monday, March 23, 2020 shows a view of a (AFP Photo)
by Dilara Aslan Mar 29, 2020 2:16 pm
Edited By Dilara Aslan

Ignoring the needs and security of the war-weary Syrian people, the Assad regime is clinging to its goals of regaining territorial control of the country with Russian and Iranian support

Despite inflicting destruction, fear and pain on his people since the civil war erupted in 2011, Bashar Assad continues trying to maintain his power in war-torn Syria.

Meanwhile, millions of Syrians face a new threat, the coronavirus. In a country where almost 50% of health facilities are out of service, treating such a pandemic seems like an impossible task.

Accordingly, even though Assad has regained most of the territory it lost, the only thing it will have left at the end are weak institutions, dependency on its backers Russia and Iran and a population whose needs have been disregarded for almost 10 years, with most fleeing the country.

In an attempt to prove to the world that he possesses control over the country, Assad continues to ravage Syria and crack down on his opposition. He has little concern about meeting the needs of his people.

The regime has survived nine years of conflict yet is still far from being a proponent of a solution that would end hostilities, as it has several times blocked the negotiation of a constitutional committee, a U.N.-brokered process to find a political solution.

“Assad remains the primary obstacle to peace in Syria,” Jennifer Cafarella, research director at the Institute for the Study of War (ISW), said in a November 2019 report. “He has consistently spoiled any diplomatic process. His actions show that he will accept only the full defeat of his opponents. Even then, he will punish those who previously defied him, as he has done in former pro-opposition communities including in Aleppo and Daraa provinces,” she stated, adding that Assad does not have the resources to conquer and reintegrate all of Syria.

An air campaign, with the support of Russian warplanes and helicopters, has uprooted citizens and systematically destroyed hospitals and other public facilities. There were 225 attacks on schools and medical buildings recorded in 2018, while at least another 50 health facilities were hit in 2019, according to the U.N. Office for the Coordination of Humanitarian Affairs (OCHA). Half of the Syrian population, or nearly 12 million people, have been forced from their homes.

The Assad regime has slowly clawed back its control since September 2015, when Russia got involved in the war and started providing support.

Indicating that few in the West expected this outcome when Russia intervened in the Syrian war, the European Council on Foreign Relations wrote in November in an online article that “Moscow’s goals were to ensure the survival of the Assad regime and reduce U.S. influence in Syria – but the extent to which this would be possible was unclear. Victory then fell into (Vladimir) Putin’s lap after both the (Barack) Obama and Trump administrations failed to create a coherent strategy on the conflict.”

Due to the silence of the international community toward the regime’s acts, the most recent campaign of the Russian-backed Assad regime succeeded in seizing the remaining parts of the M5 highway. The regime also managed to gain large swaths of land, which caused nearly a million people to flee toward safety near the Turkish border from northwestern Syria’s Idlib province. The incident was described by the U.N. as the largest one-time displacement since the start of the war and the beginning of a renewed humanitarian tragedy.

The Assad regime retook control of the strategic M5 highway, often described as Syria’s “economic artery,” in February after having it lost to opposition groups in 2012. The 450-kilometer (280-mile) highway threads together the country’s four largest cities: Damascus, Homs, Hama and Aleppo, while also cutting through Idlib province. The road linking Syria’s political capital to its economic capital, Aleppo, carried trade worth an estimated $25 million a day before the war erupted. The capture of the highway was a top priority for the Assad regime, to reestablish control of the country’s collapsed economy as it is not only a vital trade route, but also gives access to the port city Latakia. As the regimes two main allies, Russia and Iran are aiming to access the Syrian economy and take priority on reconstruction contracts.

As a result, the regime-controlled territory is shattered, divided, broken and dysfunctional. Opposition forces in its northwestern territory and terrorist groups in the northeast remain out of the control of the Assad regime, yet with its external supporters, the regime hopes to reestablish power and normalize relations with the international community. This could mean the lifting of sanctions and permitting money to flow into the war-torn country.

Yet this “victory” will come at the expense of being indebted to its backers: Russia, Iran and various armed groups. Contracts in the oil sector and in the reconstruction of infrastructure and military bases could be some of the advantages the regime’s backers aspire to gain, while terrorist organizations, such as the YPG/PKK, control large parts of the country’s energy sources.

Instead of helping its people that have endured bombings, shelling and displacement for years and providing them with their needs, rights, basic services and security, the regime is concentrating on superficial gains.

“The Syrian regime is in a state of constant denial and does not care if it inflicts further horrific suffering, and kills thousands of more Syrians, had already displaced half of the Syrian population, and caused the death of nearly a quarter of a million citizens,” Fadel Abdul Ghany, the founder and chairman of the Syrian Network for Human Rights (SNHR), stated Wednesday on Twitter.

Hundreds of thousands of families remain displaced in Syria, especially in the northwest, Although international aid agencies, the U.N. and Turkey continue to provide humanitarian assistance, that support is not enough to relieve the tragedy of these people's lives, especially that they face a threat that does not distinguish between the opposition and the regime: COVID-19.

While the most urgent needs of the civil war refugees continue to be shelter, water, sanitation and hygiene, food and protection, other needs such as health, education and nutrition are becoming more apparent.

“The horrible truth is the humanitarian disaster unfolding is far bigger than the humanitarian system’s capacity to respond. This should not come as a surprise to anyone. We have been warning of it for months. Calamity can only be avoided if Security Council members and those with influence overcome individual interests and put a collective stake in humanity first. The parties to the conflict have a legal and moral responsibility to respect international humanitarian law,” United Nations Under-Secretary-General for Humanitarian Affairs and Emergency Relief Coordinator, Mark Lowcock, warned in an interview to the Telegraph last month.