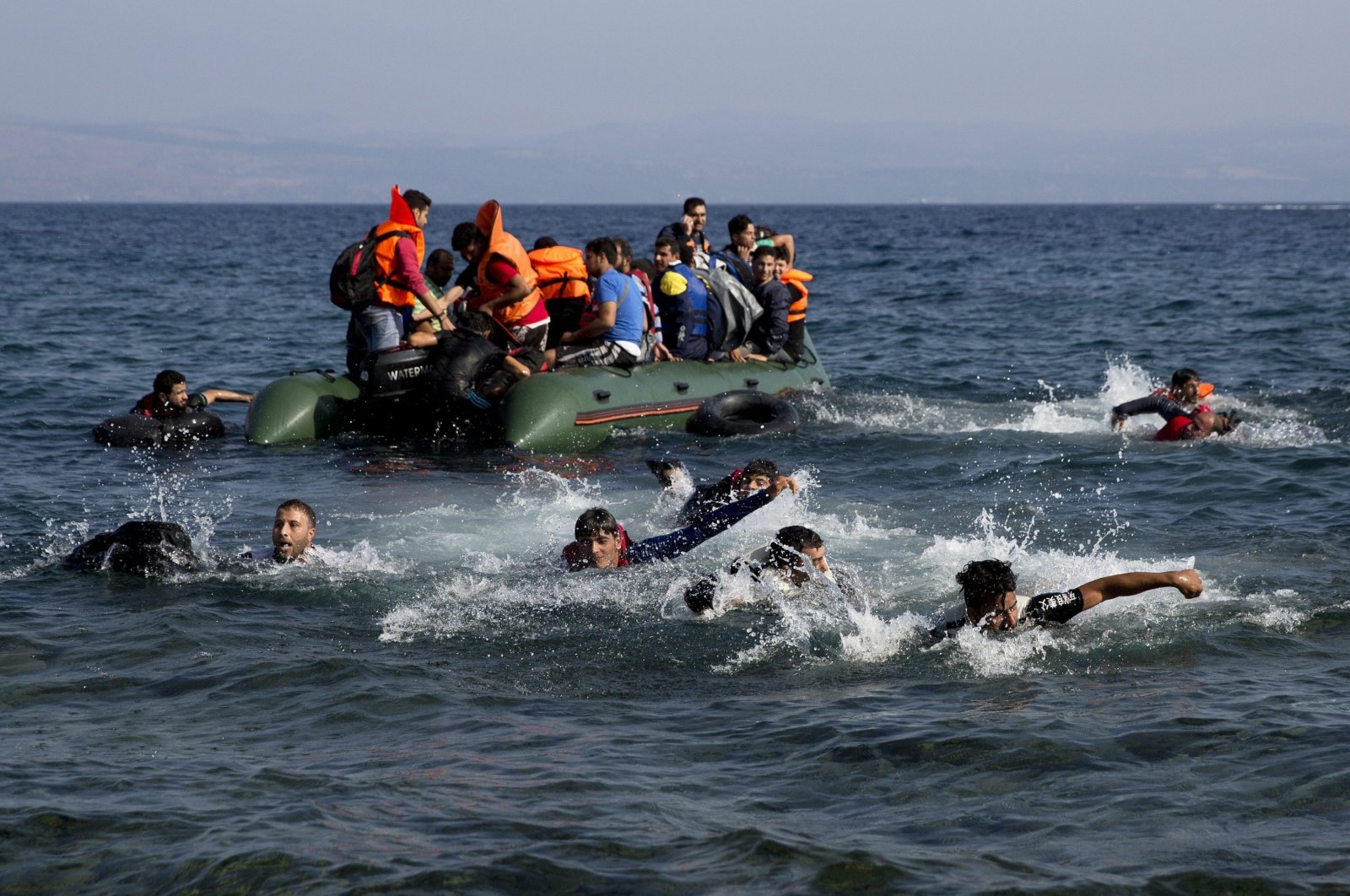 Migrants whose boat stalled at sea while crossing from Turkey to Greece swim toward the shore of the island of Lesbos, Greece, Sept. 20, 2015. (AP Photo)
by Nur Özkan Erbay Dec 24, 2020 2:24 pm
RECOMMENDED

The figures and statements given by Interior Minister Süleyman Soylu this week included significant data regarding the extent of this year’s irregular migration from Turkey to Europe.

Dec. 18 is celebrated by the United Nations as International Migrants Day. However, the day is becoming more tragic each year as it is marked over the dead bodies of thousands of migrants, including elderly, children and women, who have lost their lives trying to cross into Europe from Turkey, especially in the past 10 years following the outbreak of war in Syria.

It cannot be overlooked that some European countries that almost defend the rights of terrorists within the scope of human rights treat desperate, poor migrants that have fled war and persecution as if they are terrorists once they arrive at their borders. The increasing popularity of anti-migrant, racist politics in European countries in 2020 has pushed European states to make the issue of migration about security and implement policies that disregard human rights by showcasing a threat that in fact does not exist.

In fact, Turkey is one of the leading countries that could look at the issue from a security perspective, considering that irregular migration originates from countries bordering Turkey, making it the first country to encounter all kinds of threats ranging from terrorism to smuggling.

On the contrary, Turkey is not tackling the issue by opening fire on migrant boats and causing their deaths as its neighbor has been seen doing frequently in footage published by international media.

Turkey, which has adopted the motto "Let man live, and the state will also flourish," is not experiencing the great irony and contradictions Europe faces between human rights, personal security and freedoms.

The scandalous policies of the European Border and Coast Guard Agency (Frontex), the agency responsible for securing Europe’s borders, as well as its attempts at hiding the realities, have not been successful.

In the article titled “Illegal pushbacks in the Aegean: How Frontex head Leggeri fooled the public” published on Nov. 26 in Der Spiegel, it was claimed that, according to Frontex’s internal correspondence, Frontex Director Fabrice Leggeri was aware of Greece pushing back migrants into the open sea but swept it under the rug. Furthermore, the article stated that it accessed a document from Frontex’s internal correspondence proving that Greece illegally pushed back migrants toward Turkish waters.

Earlier this week, Soylu on Twitter urged the European Union to hold Greece accountable for its "murders" of asylum-seekers. Soylu also shared a video showing migrants being rescued and one migrant recounting his experiences with Greek officers. In the video, the man describes the poor treatment he and others experienced at the hands of the officers, adding that three of the five migrants lost their lives at sea when their boat deflated.

Soylu also shared a statement by the Turkish coast guard on the incident, which said that on Dec. 19, teams were dispatched to the area to rescue the migrants who were reportedly stranded on three boats.

These pushbacks are considered contrary to international refugee protection agreements, which say people should not be expelled or returned to a country where their life or safety might be in danger due to their race, religion, nationality or membership in a social or political group.

So, what is Turkey doing in the face of these incidents? Turkey does not view irregular migration just as a security issue as Europe does. It saves the lives of the migrants Greece tries to drown while also carrying out programs for integration and social adaptation in Turkish society. The financial investment Turkey has made for the over 3.5 million Syrian refugees living in the country, according to unofficial figures, has reached $40 billion (TL 306 billion).

According to data from the Directorate of Migration, Turkey held 26 adaptation meetings in 25 provinces where the number of foreigners is high, and training was provided to 9,500 foreigners and locals between November 2018 and February 2020. In the same period, 16 workshops in 15 provinces took place for offices of the mufti and provincial education directorates that reached 5,800 people. In the past two years, 108 events were organized on social adaptation with the participation of nongovernmental organizations (NGOs), public personnel, locals, opinion leaders and foreigners in Turkey.

As can be seen, Turkey is trying to solve and manage the issue of irregular migration and migrants by prioritizing a humanitarian perspective despite all the difficulties and security threats.

Yet, it does not see the same approach among its European interlocutors. The new financial aid decision the European Commission took this week is only a small contribution to the problem compared to Turkey’s actions.

The EU’s executive body said Wednesday that it is extending two programs, one that provides cash assistance to migrants in Turkey to meet their basic needs and the other that provides funds to help educate children. The programs will be extended until early 2022 at a total cost of 485 million euros ($590 million).

Funding worth $6 billion was to be transferred from the EU to Turkey to be used for refugees according to the March 2016 agreement. The EU administration has not completed the transfer of this payment in the past five years, while it has on the other hand continued its security policies and terrorizing methods at the Greek border. The question that needs to be asked is: Does Europe really want to keep migrants alive?