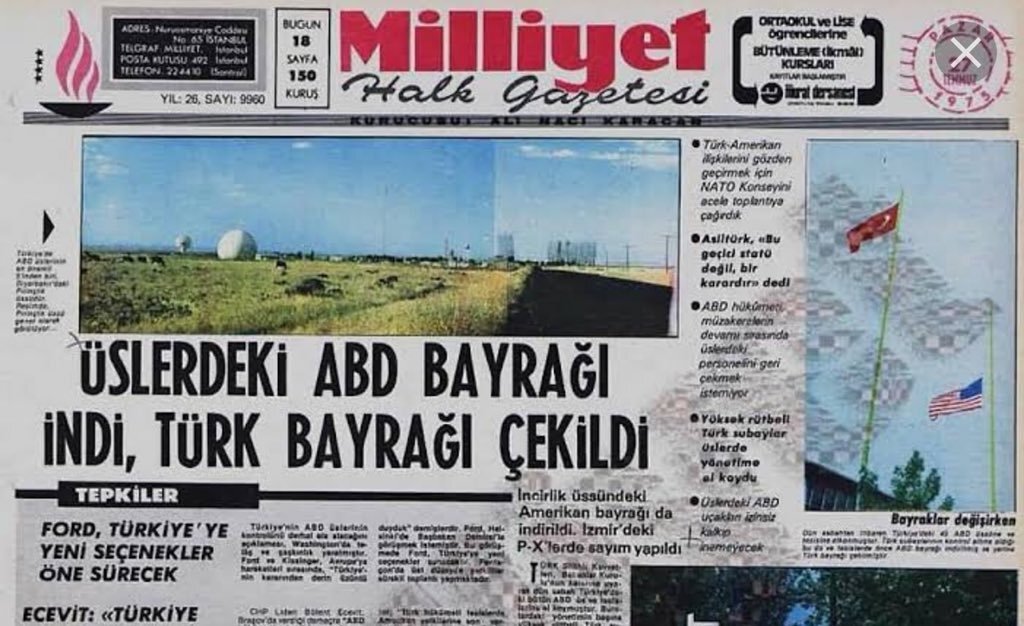 “The U.S. flag in bases were taken down, the Turkish flag was raised,” Milliyet daily's headline read, referring to Ankara’s closing of the U.S. bases in Turkey after Washington imposed an arms embargo on Turkey following Ankara’s intervention in Cyprus as a guarantor power on July 27, 1975. (Milliyet)
by Nur Özkan Erbay Dec 17, 2020 2:26 pm
RECOMMENDED

Washington finally announced sanctions against its NATO ally, Turkey, under the Countering America's Adversaries Through Sanctions Act (CAATSA). The sanctions had long been dangling like a "Sword of Damocles" over Turkey. The sanctions will be implemented on the pretext of Ankara's conducting of business with Moscow, which Washington sees as its enemy.

The head of Turkey's Presidency of Defense Industries (SSB) and three other officials have been singled out as targets of the sanctions, but the true scope will become clearer in the coming days. However, it is certain that Turkey was ready to sanction in return and create exit strategies from this threat. New U.S. sanctions will leave most of Turkey unaffected, including the National Defense Ministry, the Turkish Armed Forces (TSK) and defense companies, SSB head Ismail Demir said Thursday.

Aside from all of the technical details and processes, it is possible to say that these latest sanctions on Ankara are the last straw. Turkey sees that Washington has been insisting on unconstructive steps and language because the long-standing loss of trust between the U.S. and Turkey is still on the front burner. Ankara now believes these most recent sanctions are not a cause but the result of these worn-out politics driven by Washington.

It is likely that Ankara will not seek these answers from either arrogant members of the U.S. Congress or military staff at the Pentagon, which ignored Turkey's national security considerations and acted directly against them. Ankara probably will not pose these questions to the U.S. diplomats who closed all communication channels despite Turkey’s willingness to talk.

Who declined to sell U.S.-made Patriot missile systems to Turkey despite repeated requests? Who supports terrorist groups such as the PKK's Syrian branch, the YPG, – an enemy of NATO ally Turkey – in Syria? Who directly attacked the Turkish economy in the summer of 2019? Who implemented economic sanctions against Turkey? Who currently harbors the cult terror group that orchestrated the failed coup attempt in Turkey and its leader on U.S. soil?

Turkey and everyone else knows that the answers to these questions suggest that Turkey will not try to prove its rightfulness hereafter.

Moreover, Ankara is also aware of the endless hypocrisy that Washington has exhibited during its disagreement over Turkey's purchase of the S-400 missile. In the past, other NATO members, namely Greece, Slovakia and Bulgaria, bought the Russian S-300 air defense system but did not receive the same amount of outrage from the U.S.

What's more, according to a report by The New York Times on Dec. 24, 1994, under a secret Pentagon program in 1994, the U.S. Department of Defense purchased S-300s from Russia as a part of a military espionage operation to develop the American Patriot Missile Defense Systems.

With all of these facts lined up, no one can persuade Ankara that Washington has genuine, rational and realistic considerations that Turkey’s purchase would trouble NATO’s security.

That is why President Recep Tayyip Erdoğan said in his speech Wednesday: "Sanctions are a clear attack on our country,” underlining that the reason behind them is not technical but political.

Noting that CAATSA sanctions have not been imposed on a single country since the act was passed in 2017, Erdoğan once again underlined that the sanctions being imposed on a NATO member for the first time does not fit into the understanding of an alliance.

On the other hand, Erdoğan said Turkey has seen the real intention of the U.S. "Even if the S-400s were not the subject, it is clear that similar issues would be used for different reasons. They are trying to divert us from our path with threats," he said.

Erdoğan's remarks represent a broad layer of public opinion in Turkey. Turkish-American relations have been experiencing a huge loss of trust in institutions since the Barack Obama era. During the Obama administration, Washington seemed eager to implement a model partnership, which soon played out to the contrary on the ground with failed U.S. policies. This period, fortified by U.S. President Donald Trump's contradictory policies, became not only an issue for U.S.-Turkey relations but also for U.S. relations with other traditional allies.

During Trump's four-year term, although some of the disputes were resolved thanks to the personal relationship between the two countries' leaders, the U.S. Congress, Pentagon and State Department have maintained their resistance and hostile policies toward Turkey’s institutions. Therefore, permanent and sustainable communication and relationship styles could not be developed between Ankara and Washington.

Due to intense pressure from the U.S. Congress on the pretext of Turkey's S-400 purchases, Ankara was first removed from the F-35 fighter jet program and now faces military and economic sanctions. Former U.S. special representative for Syria and Ambassador to Turkey, James Jeffrey, recently gave an interview before retiring in which he confessed that the U.S. even economically attacked Turkey.

These attacks are not only closely watched in political, governmental and opposition circles but also very broadly among Turkish society. These are also perceived as attacks that aim to directly threaten Turkey’s national defense industry, national security, regional influence and on the top of that, its national sovereignty.

In fact, it is obvious that the U.S. has long threatened Turkey with different methods and exposed Ankara to a range of threats. However, the latest sanctions are probably the last straw for Ankara given that the entire nation holds a common view on them.

Ankara may soon remind Washington what counter-tools it has against U.S. sanctions. And Ankara can also tell Washington that as long as the fragile alliance continues under these conditions, any reciprocal steps will not only be the decision by the Turkish state but by the whole nation.