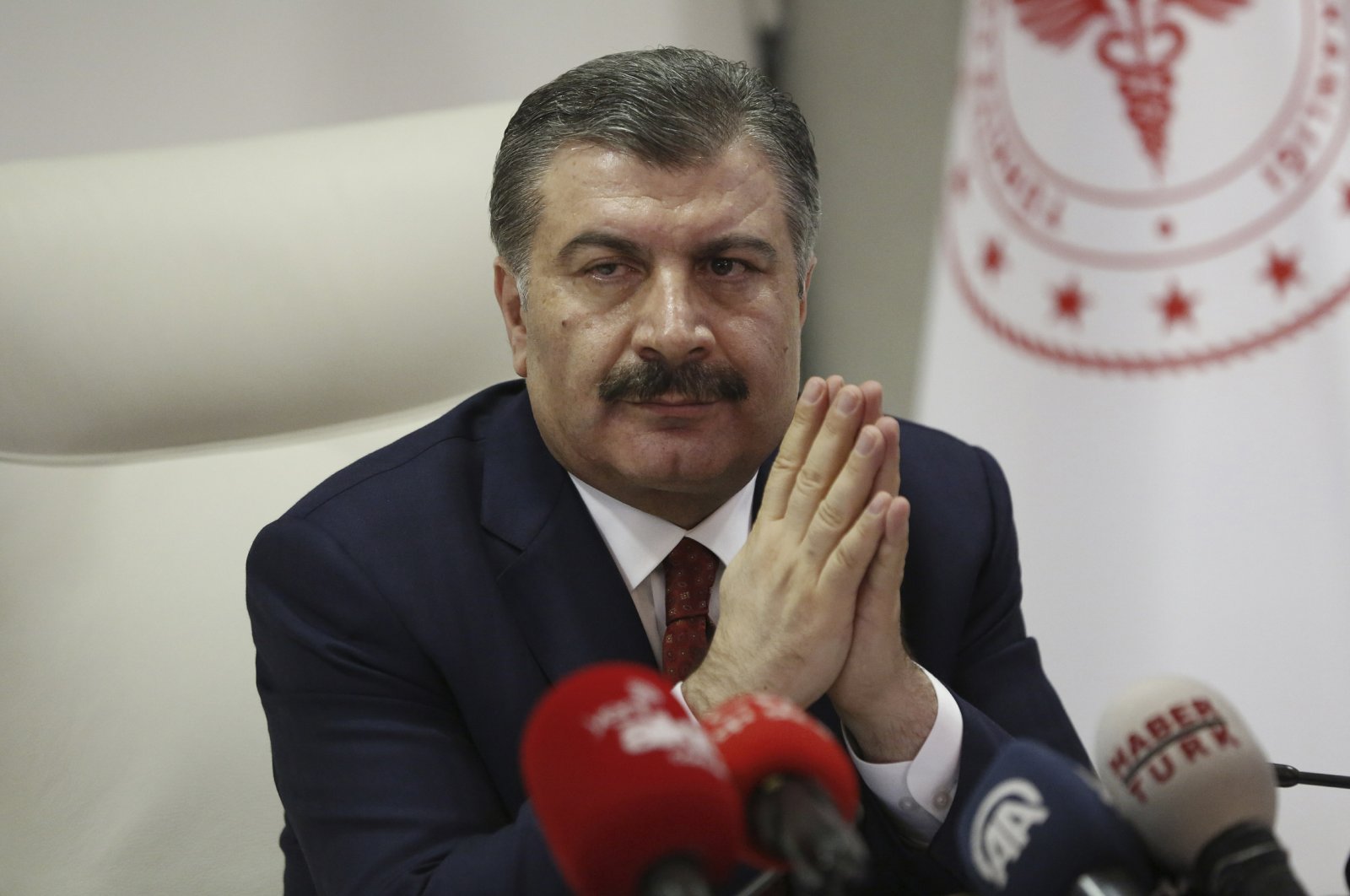 Faced with a series of crises that led the country to adopt strict, determined measures while minimizing cost, the stances of Turkey's prominent ministers played key roles through appearances and heartening speeches in relieving public tension while building trust

After a rocky start, 2020 continues to be the year of disasters for the whole world as one troublesome news follows another while a pandemic spreads across the globe. Turkey also faced its share of catastrophes during this process, going through an earthquake, a cross-border operation in Syria and lastly, the eventual entrance of coronavirus into the country. All these developments caused major concerns within Turkish society, creating an uneasy atmosphere. While everyone was wondering how to respond to the series of events, ministers of the country were working furiously to develop a unique set of communication strategies, which were also appreciated by the public.

"These are unique times that rarely occur all at the same time in the natural flow of everyday life. However, despite all the destructive, shocking and tiring negativities, our government, particularly President Recep Tayyip Erdoğan, and the ministers have been conducting a proactive crisis management process," said Ali Büyükaslan, dean of Medipol University's Communications Department.

Giving the examples of the Elazığ Earthquake, Operation Spring Shield and the novel coronavirus, which all occurred within the course of a month, Büyükaslan said that all the concerned ministers, namely Interior Minister Süleyman Soylu, Defense Minister Hulusi Akar and Health Minister Fahrettin Koca, have been managing the crises quite "successfully" so far.

At least 41 people were killed and 1,607 others were injured after a massive earthquake with a magnitude of 6.8 rocked the eastern Turkish province of Elazığ at the end of January. While the country was still trying to recover from the earthquake, Operation Spring Shield was launched after at least 34 Turkish soldiers were killed in a Bashar Assad regime airstrike in Syria's northwestern Idlib province. After these developments, the country was shaken once again with the coronavirus knocking at its door despite the weeks-long relative safety and preventive measures.

According to Büyükaslan, failure to foresee a crisis and neglecting necessary measures cause the most damage.

"Apart from this, making wrong decisions in a panic and hurrying only adds another layer to the already existing negativities," he expressed.

"However," Büyükaslan said, "We saw in this period that the Turkish ministers were ready with a crisis management process and were making an effort to adopt a straightforward procedure."

According to Ali Saydam, a communications expert and author, there are three factors that would make communication during a crisis successful.

"The first one is to react quickly," Saydam said.

"I believe the presidential system has been quite helpful for the ministers to formulate immediate responses. They did not have to apply to an upper or lower department and wait for their confirmation. They have been able to conduct one-on-one, short meetings and adopt a quick stance in the end," he explained, adding that thanks to the advantage of the presidential system, the people did not wait for long for a proper statement from the ministers.

On June 24, 2018, Turkey officially switched its administrative structure through an election and embraced the presidential system, leaving the parliamentary system behind. One of the main premises of the system was to reduce the bureaucracy to make decisions faster and enabling all services to be result oriented. In this respect, the country saw the number of ministries decrease from 21 to 16 to speed up decision-making in the new system.

According to Saydam, the second crucial factor is to establish frequency. "By frequency, I mean the frequency of their appearance on TV and releasing statements for the people. All these ministers (Soylu, Akar and Koca) have been on TV frequently in these crisis periods," Saydam said, highlighting the importance of being available to the people during such incidents to gain their trust.

Immediately after the earthquake, Erdoğan said the government took steps to provide aid and assistance to people affected by the quake, which caused widespread fear. Soylu, Koca and Environment and Urban Development Minister Murat Kurum arrived in the province later that day to help coordinate rescue and relief efforts. Soylu increased his presence on social media and made frequent public appearances. His first statement following the incident was quite informative, sharing current information about the earthquake while portraying the full picture of the events. He continued to inform the community about the situation with frequent updates. Koca also offered an immediate reaction, extending his condolences to the victims of the earthquake while ensuring that all the health services in the region are ready and available for the initial response. The ministers also held a joint press conference the day after the earthquake to inform the public, while answering their questions

After the killing of Turkish troops in Idlib, Akar followed a similar path. Despite initially not announcing the incident himself, Akar released a quick statement following the news in which he explained the situation, stating that Russian forces were already informed on the position of the Turkish troops. He responded fast and gave the military the order to launch a counterattack against the regime forces during his visit to the Syrian border bases the next day. Lastly, on March 1, the minister announced the official name of the operation: Operation Spring Shield.

When it comes to the coronavirus, Koca became the front figure of the crisis as he had been managing the process since the very beginning. Koca's role in the process began even before the virus reached Turkey as he constantly informed and debunked fake news and rumors, ensuring that the state has taken every measure possible to delay the inevitable. Finally, last week, on March 11, just after midnight, Koca announced the country's first case of COVID-19 to the public. His speech was informative, giving the basic information on the case while ensuring people that this is not yet an epidemic for Turkey and everything is under control. He also mentioned additional measures such as placing those arriving from Europe under a 14-day quarantine. The minister continues to update the public through regular appearances on television. His last speech was Tuesday night when he announced the first death in the country from coronavirus. "As a doctor, I have lost my first patient," Koca said in his informative but also emotion-filled speech.

The last, but certainly not the least, significant factor in Saydam's opinion is being truthful in their statements.

"They did not deceive people. They did not misinform them," Saydam expressed, stating that when compared to some other states and leaders, Turkey and its ministers have been reliable and honest.

"For instance, I believe that the U.S. has been wrong in this respect. (U.S. President Donald) Trump stated one day that he is fine but the next day it was reported that he got the test (for the virus). This is the most dangerous thing in the management of the communications of a crisis: Creating ambiguity and perception that there is some information being hidden from general public knowledge," Saydam emphasized.

In Büyükaslan's opinion, the biggest step taken by the Turkish ministers was to have a planned monitoring of the process while taking necessary measures and involving the related actors in the process.

"The health minister's initiative to form a science board even before the virus had become a global pandemic and taking necessary measures, having a broad knowledge of the subject to the point of recommending Iranian officials to put the city of Qom under quarantine and the immediate establishment of preventive measures on the borders are all a result of his success in managing the crisis," Büyükaslan said, indicating that similar qualities can also be seen in the interior minister's response to the process.

The Coronavirus Science Board, formed at the end of February, has convened daily under the coordination of the health minister. Turkey’s speedy action against the pandemic was praised by the World Health Organization (WHO), while the government's response has been largely appreciated across the country.

Saydam further clarified that managing a crisis and managing the communications of a crisis are two different things. In order to illustrate what he means, Saydam also gave an example of the formation of the science board.

For Büyükaslan, the main reason behind all of these successes is the principles of "speaking, not sitting president" and "management from the field, not from the office," both of which, the dean said, have been the cornerstone of the Turkish government policies over the last decade.

"These principles have gained appreciation from all the segments of society. People know that when they see managers comforting them with their words and actions and work more than themselves, the pain of the crisis will be felt less eventually," he highlighted.

During all these crises, the stances of ministers became a major topic of discussion within the society, with many appreciating their responses. On social media, posts by the ministers received major positive responses from the people with thousands expressing their gratitude. The emotional photographs of the ministers announcing the incidents also went viral. The last photograph that went viral was a comparison of Koca's two photos, one from the night he announced the first case and the other from the day he announced the first death. In the photos, the change in Koca's appearance within a week was quite visible as he was looking much more tired in the latter one with red eyes, leading the people to feel compassion for him and his work.

The dean further expressed that because the information about the crisis is being shared with the public with utmost clarity, with all of its aspects, possible risks, gains, losses and preventive measures, it not only builds trust within the society but also the perception of everything is being taken care of by the related ministers.

"Can you believe that our country, thanks to this proactive perception of management and transparent stance of the managers and their efforts, is getting over the most destructive processes with minimum harm, while other countries had to go through terrible courses due to the same crisis?" Büyükaslan asked.

"We have progressed from the times when we questioned where the state was when all those horrible things were happening to a time that we question whether or not people were taking the necessary measures since the state has been doing everything it is supposed to do," Büyükaslan said, explaining the progress Turkey has seen over the decades.