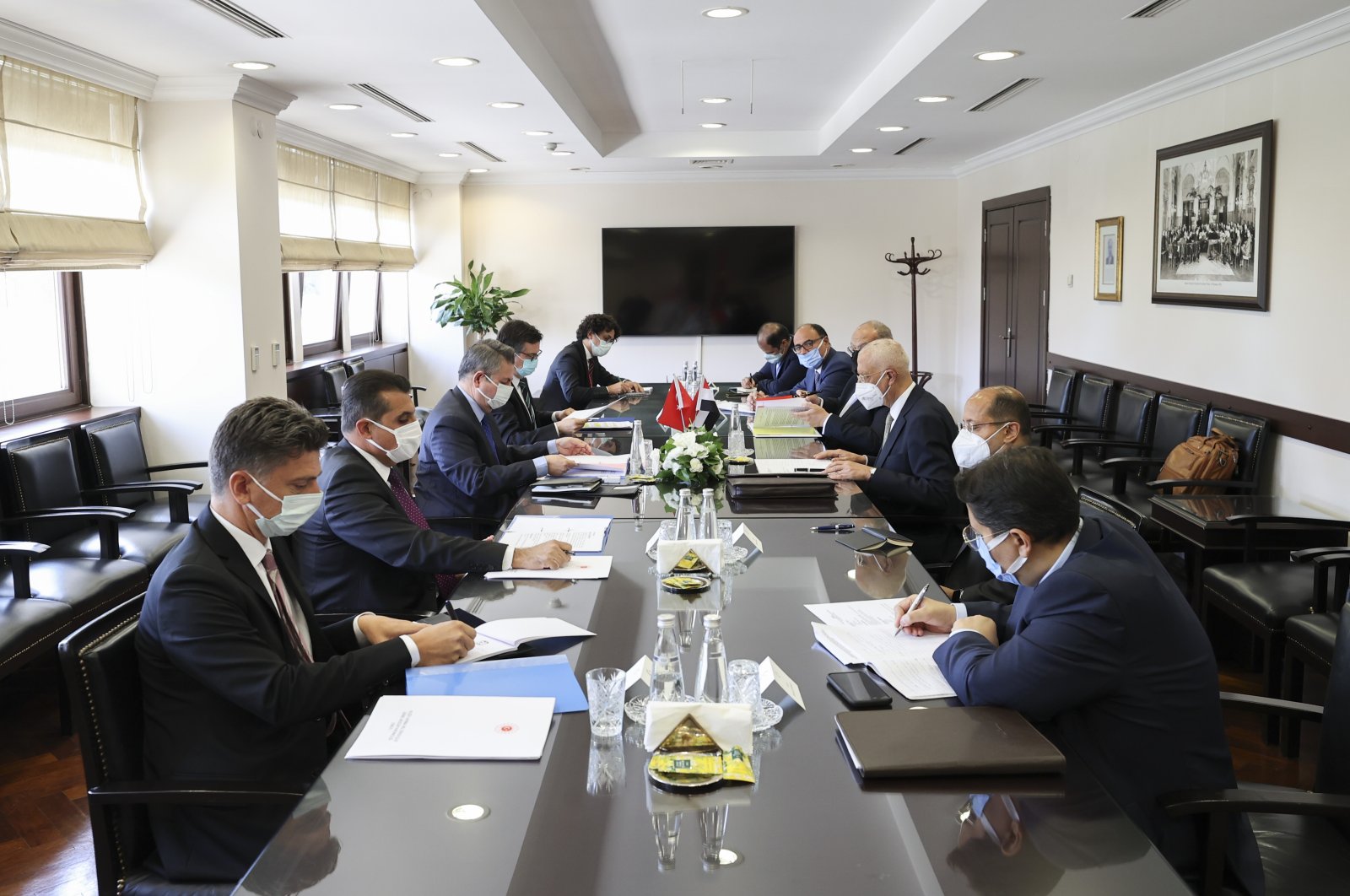 Turkish and Egyptian delegations meet for the second round of political talks in the capital, Ankara, Turkey, Sept. 7, 2021. (AA Photo)
by Nur Özkan Erbay Sep 09, 2021 6:29 am
RECOMMENDED

The first diplomatic high-level contacts between Turkey and Egypt after a break of eight years began in May of this year in Cairo. The two countries' deputy foreign ministers held talks in Ankara this week to assess the conditions and scope of the normalization process.

In the second round of political consultations, common interests, as well as political, commercial and regional relations between Egypt and Turkey, were determined and detailed.

In the first statement after the meetings, the Foreign Ministry said Turkey and Egypt had agreed to continue political consultation talks and that they have a common desire to make progress in the areas discussed.

Earlier this year, Turkey said it had resumed diplomatic contact with Egypt and wanted to improve cooperation after years of tensions that began with the disruption of relations in 2013. On April 15, Turkish Foreign Minister Mevlüt Çavuşoğlu announced in a live broadcast that it was agreed the channel first opened between Turkish and Egyptian intelligence would continue through the countries' foreign ministries. Çavuşoğlu said Egypt had invited the Turkish side for a visit in early May. After an inter-delegation meeting, Çavuşoğlu expressed his willingness to meet with his Egyptian counterpart as well.

In this respect, despite all the positive steps taken by Turkey, it is impossible to agree with the Abdel-Fattah el-Sissi administration, which took charge of the coup in Egypt, on a political basis.

Despite this, Turkey does not ignore the fact that Egypt is not only a political actor but also an important commercial partner in the region. Cairo's positive approaches to this issue are also particularly affected by the changing new Eastern Mediterranean equation.

Although decided and unconditional normalization has not officially been established, growing momentum in diplomatic and trade relations between Ankara and Cairo is expected to be seen soon as a result of the positive steps to be taken mutually. Çavuşoğlu confirmed this in remarks on the issue on Tuesday and said: “Our friends are holding talks at the ministry. If we decide after talks, we may take the necessary steps to appoint mutual ambassadors.”

He also mentioned Turkey's win-win policy in the region and pointed out Egypt's potential gains in the Eastern Mediterranean: “We will start negotiations on maritime jurisdictions if they want. If they deal with us, they will see more gains if they make an agreement with us.”

Everyone knows Egypt’s dissatisfaction with its maritime authorization agreement with Greece. From this point of view, Cairo making a new agreement with Ankara is also a high probability. However, it seems inevitable that Cairo, aware of Turkey's role in the Eastern Mediterranean based on a playmaker and win-win strategy, is not short-lived and will also use this opportunity to its advantage.

Çavuşoğlu signaled that there have been recent positive steps regarding normalization with the UAE and that relations will be restored if they continue. He also noted that negotiations with Saudi Arabia continue at the same pace. The collective economic and security interests have been recognized again in the re-momentum of relations between Ankara, Dubai, Cairo and Riyadh, which have been decidedly low profile for a long time. Ankara needs to believe that these capitals, which have not been shy about confronting Turkey so far, especially in the crises in Syria, Libya and the Eastern Mediterranean, have changed their minds and are sincere.

The predicted softening in U.S.-Iran relations after the Biden administration took over the White House seems to have prompted the Gulf to develop new policies in the region as soon as possible. Moreover, the Washington administration's style of politics, which avoids paying costs in the Middle East and abandons its allies when their interests require it, is a fact that Riyadh, Cairo and Dubai perhaps face neither for the first nor the last time.

Given all this data, the most reasonable and accurate choice in a partner in the region is Turkey, in terms of the historical origins, economic gains, military potential and execution of a win-win strategy for the Gulf capitals and Egypt.

The following statements from Ankara's interlocutors also confirm that this fact has been noticed. “The UAE is interested in exploring prospects of reinforcing ties," an Emirati official told Reuters this week, pointing to trade and investment opportunities in transportation, health and energy.

Countries that do not ignore the fact that Turkey is now a center of attraction in its region and in the world see that they can maximize their interests by decisively cooperating with Turkey. Examples of this are abundant in North Africa, the Caucasus, the Middle East and the Eastern Mediterranean. Therefore, in the current geopolitical conjuncture, Gulf capitals and Egypt recognize that this opportunity stands as the best option for the future. A truce between Turkey and the UAE has calmed tensions that fueled conflicts including Libya's war, officials and diplomats say, after years of animosity and insults.

But with political differences still running deep, the two countries are expected to focus on building economic ties and de-escalating, rather than resolving, an ideological rift that has drawn a fault line through the Middle East.

The rift between the two countries stems from the Arab Spring, regional rivalry, including in Libya, as well as Turkey backing Qatar in a Gulf dispute, putting it at odds with the UAE, Saudi Arabia and Egypt. In Libya, Turkish support last year helped Libya's United Nations-backed government drive back UAE-supported forces trying to seize the capital. Also in Somalia, Turkey and the UAE have competed for influence. In Syria, Turkey still rejects Bashar Assad, while the UAE has opened an embassy in Damascus.

Turkish officials and Gulf diplomats say both countries recognize that their geopolitical tensions came at an economic price, heightened by the COVID-19 pandemic. Although no agreement has been announced on investments, the two countries already have an economic platform to build on.