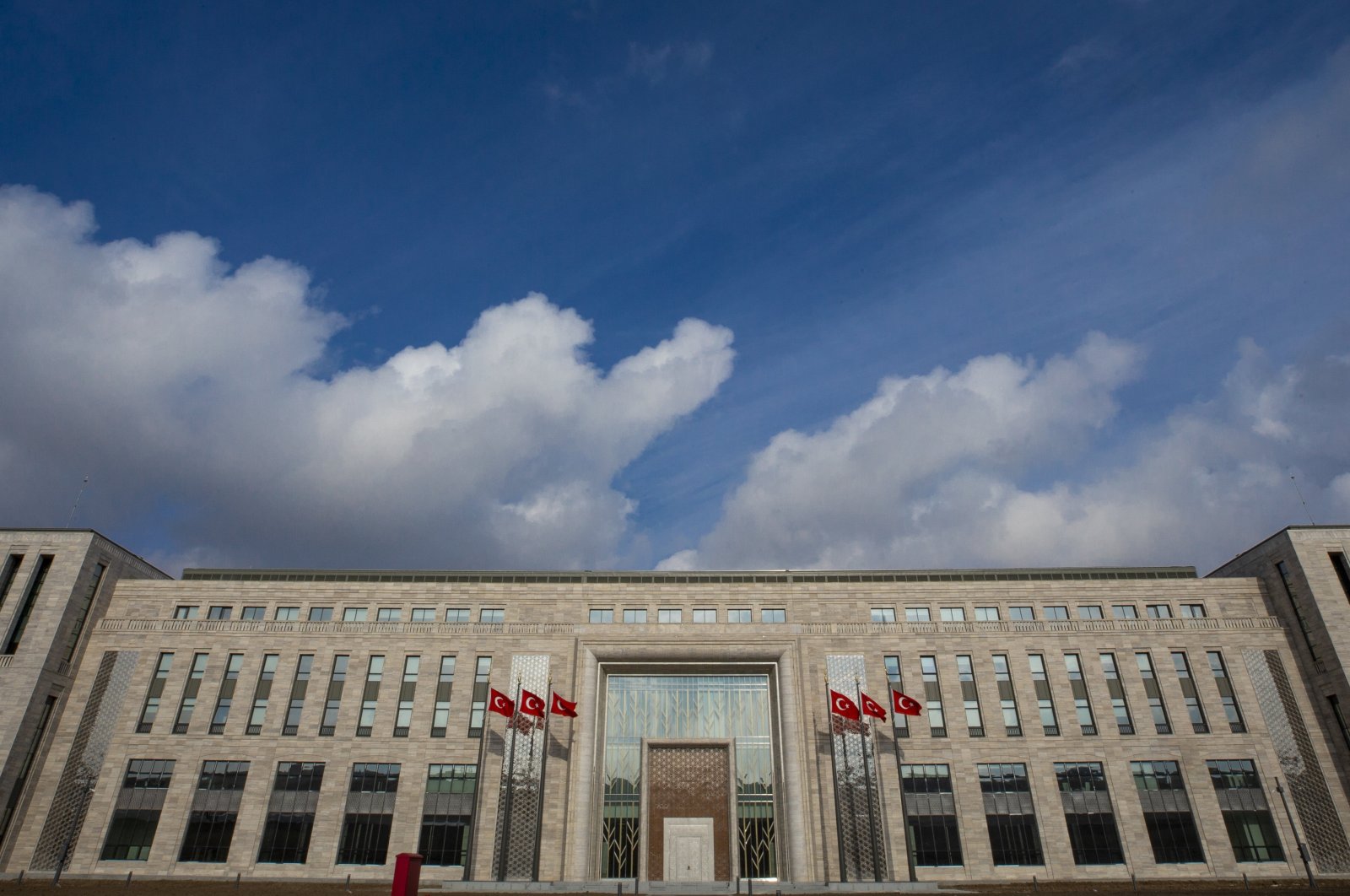 The Headquarters of the National Intelligence Organization in Ankara’s Etimesgut district is seen in this photo, Jan. 8, 2020 (AA Photo)
by DAILY SABAH Oct 26, 2021 1:33 pm
Edited By Dilara Aslan

Turkey with its continuous counterespionage operations has become a safe haven for asylum-seekers and political dissidents targeted by intelligence services of other countries.

Most recently, 10 foreign ambassadors tried to intervene in Turkey’s independent judiciary and sovereignty calling for the release of jailed businessperson Osman Kavala, criticizing Ankara for “human rights violations.” On the contrary, Turkey has provided refuge to many dissident figures whose lives are under threat in their home countries.

Many attacks and assassination attempts by intelligence services against dissidents, journalists and civilians in Turkey seen as threats by countries like Iran, Russia, Syria, United Arab Emirates (UAE) and Saudi Arabia have been prevented by Turkey’s National Intelligence Organization (MIT).

These operations display the increasing capacity of MIT’s counterespionage.

One of the biggest counterespionage operations of Turkey was the disclosure of the murder of journalist Jamal Khashoggi on Oct. 2, 2018, by Saudi Arabia in its consulate in Istanbul.

MIT exposed the actions of the team that killed Khashoggi along with the people implicated in the crime and disclosed the information to the public.

Recently, 15 Palestinian and Syrian origin spies were exposed in operations against Mossad agents that were gathering information about Palestinians in Turkey. The operation against the Israeli intelligence service Mossad was dubbed “Operation Muteni.” It was determined that Mossad member Ahmad Zahid, who was living abroad, was carrying out espionage activities.

A 200-person MIT team detected that Mossad was carrying out activities against Israeli dissidents in Turkey. It followed five cells consisting of three people for a year before catching them on Oct. 7 in Istanbul. According to information gathered by Sabah daily, Zahid used 15 spies in intelligence activities against Turkey and provided them funds.

Turkey has also prevented assassination attempts against Chechen dissidents living in the country.

Within the scope of "Operation Kama" (Dagger), suspects determined to be preparing for the assassination of Vahid Edelgirev, a Russian citizen of Chechen descent, in Istanbul in 2015 were caught in April 2016. Edelgirev was a member of the Caucasus Emirate, a Chechen organization designated as a terrorist group by Russia and the United States.

The Istanbul police also conducted the operation known as "Operation Gümüş" (Silver) against Markharbi Isaev, another Russian citizen of Chechen descent, and those who were provided arms by the Ramazan Kadirov network to assassinate a Chechen in Istanbul.

With "Operation Ayı" (Bear), Turkey caught four Russians, one Ukrainian and one Uzbek citizen in simultaneous operations in Istanbul and Antalya in October 2021 for activities against dissident Chechen elements and those with links to the Russian intelligence.

MIT recently conducted "Operation Vortex" against Middle Eastern and African elements. As part of the operation, MIT and the police caught and arrested six suspects and two Iranian agents that came to the residence of Iranian former military helicopter pilot Mehrdad Abdarbashi, who had been living as an asylum-seeker in eastern Van province, to abduct him at the instruction of the Iranian intelligence.

In "Operation Pençe" (Claw), 12 suspects were caught in 2019, including gunman Abdulvahhab Koçak who is linked to the murder of Iranian citizen Masood Molavi Vardanjani, who shared posts on social media opposing the Iranian regime. The targeting of Vardanjani was ordered by the Iranian intelligence as well as fugitive Iranian drug lord Naji Sharif Zindashti.

Again closely linked to the Iranian intelligence were 33 people caught in 2019 by "Operation Divan" by the Van police and chief prosecutor’s office for espionage activities. In "Operation Tornistan" (Reverse), another operation against the activities of the Iranian intelligence in Turkey, two suspects traveling to Turkey to abduct Ahmad Reza Khosravi, who was residing in Van, and take him to Iran were caught. Khosravi had applied for asylum in 2015 when he was a pilot with the rank of squadron leader.

On the other side, MIT has also been conducting counterespionage operations against the United Arab Emirates (UAE) and Syrian intelligence services. Within the scope of the "Temora Operation," Samer S.R. Sıhaban and an aide sent from Bulgaria Zaki Hasan, who is also a retired brigadier general of the Palestine communication service, were caught. Both were sent to Turkey by UAE intelligence and the Mohammad Dahlan group, which supported the July 15 coup attempt in Turkey, to gather information about Fatah and Hamas members in Turkey.

Mahmoud Ayesh Alastalın, a Palestinian of Jordanian descent who was recruited by Dubai and sent to Istanbul to gather intelligence on the Muslim Brotherhood by the UAE service, was caught in the "Kartal (Eagle) Operation."

Besides the operations targeting foreign sources, MIT has also been focusing on internal activities. Yusuf Nazik, who was sought with a Red Notice and implicated in the terrorist act on May 11, 2013 in Hatay province’s Reyhanlı district that killed 53 Turkish citizens, was caught in a cross-border operation called "Hançer" (Dagger) in Syria and brought to Turkey.

MIT also stepped up its efforts to prevent the increasing espionage activities against Turkey’s budding defense industry. After it was determined that Mechanical and Chemical Industry Corporation’s (MKEK) Kırıkkale arms factory head Mustafa Tanrıverdi was attempting to sell the secret information of MKEK-produced MPT-76 and MP-5 guns in return for TL 360,000 ($38,048) and TL 200,000, a joint operation was conducted with the police at the Çiçek restaurant in the capital Ankara. The suspect caught in "Operation Erguvan" (Cercis) was sentenced to 12 years and eight months in prison.

Bosphorus Gas Corporation Deputy Director-General Emel Öztürk and Serkan Özbilgin were determined to have obtained and transferred secret information on gas imports of Turkey's Petroleum Pipeline Company (BOTAŞ) from Russia, Iran and Azerbaijan to Gazprom officials. Öztürk and Özbilgin had contacted and received the information from Gürcan Öz, a personnel from BOTAŞ. The two were arrested on Sept. 1, 2020, while Öz was arrested on Sept. 9, 2020, in "Operation Bosphorus."

Furthermore, Murat Ali Çömez of the naval forces and Yusuf Hakan Özbilgin of the Presidency of Defense Industries (SSB) had transferred secret information of the defense industry activities to private defense companies and a private sector worker named Emre Özlük. They were caught in a joint operation of MIT and the police in January 2021. Within the scope of the operation, an indictment was prepared for 11 suspects for political and military espionage.

All these operations show how much Turkey's counterespionage capacities and capabilities have increased in recent years. Assassination, sabotage and kidnapping attempts, especially targeting foreign opposition journalists and political figures residing in Turkey, not only cause harm to these people but also create chaos in Turkey, according to security experts.