US engagement with Greek Cypriots could pave way for new tensions, experts say 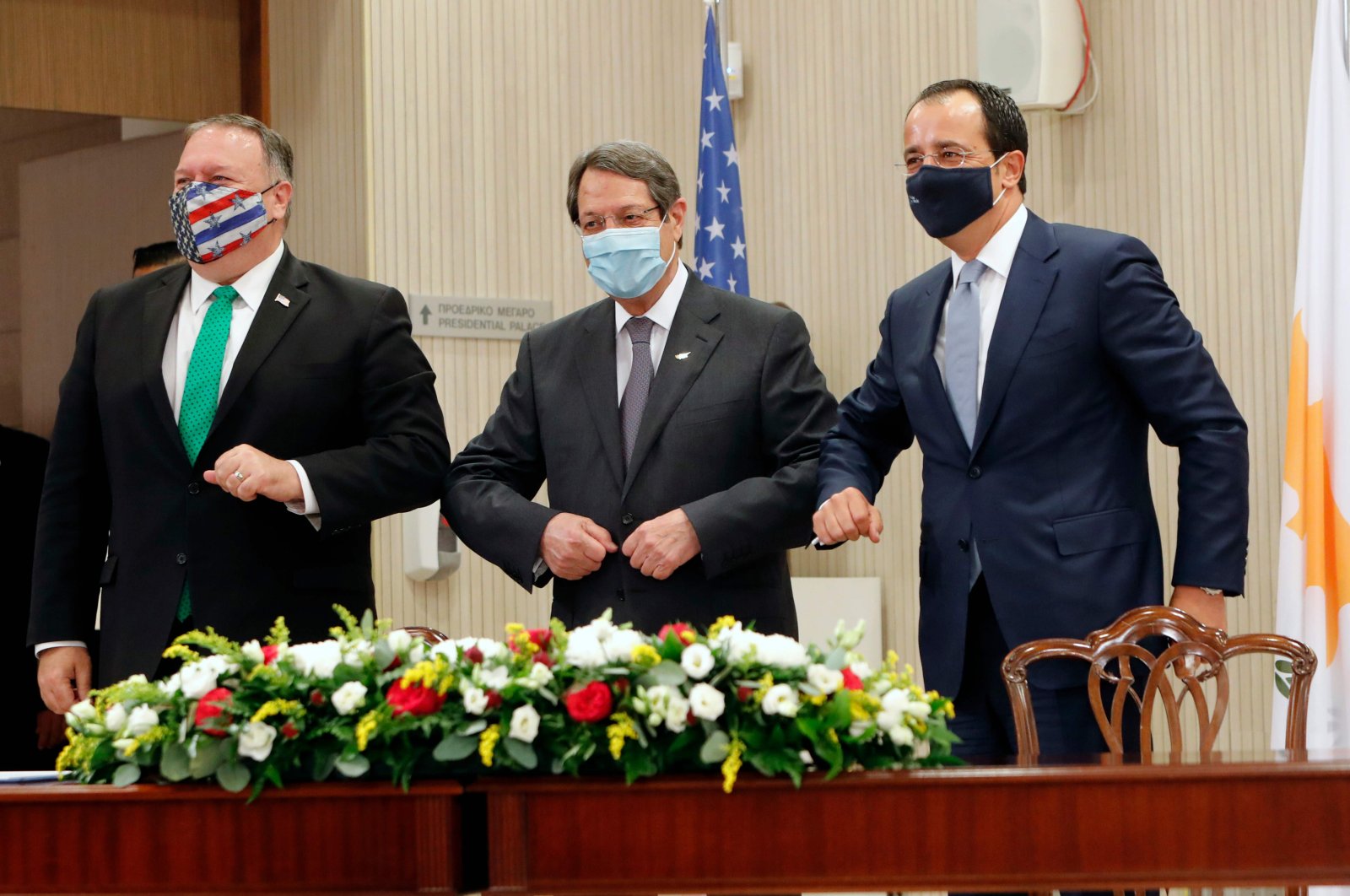 Washington has abandoned its policy of balance in favor of the Greek side in Cyprus, experts say, adding that Russian influence is a major factor for the increasing U.S. involvement in the region

The recent U.S. policy toward the Greek Cypriot administration and increasing military cooperation between the two governments reveals that Washington has abandoned a balanced policy between its NATO allies in the region, experts say. The move is more likely to stir up conflict than to resolve it, they say.

Speaking to Daily Sabah, Murat Yeşiltaş, director of security studies at the Foundation for Political, Economic and Social Research (SETA), described the recent U.S. actions toward the Greek Cypriot administration and Greece as a strategy to balance out Turkey’s increasing military power in the region.

U.S. Secretary of Mike Pompeo visited the Greek Cypriot administration on Saturday and called on Turkey to cease activities that heighten tensions in the Eastern Mediterranean.

"We remain deeply concerned by Turkey's ongoing operations surveying for natural resources in areas over which Greece and Cyprus assert jurisdiction over the Eastern Mediterranean," Pompeo told reporters in Nicosia after a meeting with Greek Cypriot leader Nicos Anastasiades and foreign minister Nicos Christodoulides.

Pompeo's trip came shortly after Washington lifted a decades-old arms embargo on the administration, outraging Turkey, and days after Russian Foreign Minister Sergey Lavrov paid a visit to the region.

Pompeo took the opportunity to remind the Greek Cypriot administration that Washington was uneasy about Russian warships stopping off at Greek Cypriot ports.

Mesut Hakkı Caşın, a law professor at Istanbul's Yeditepe University, on the other hand, told Daily Sabah that the U.S. has abandoned its equilibrium policy in the region in favor of the Greek side.

“The U.S. has recently abandoned its policy of balance between its two NATO allies in the region. It has been conducting military deployments in the islands there in cooperation with Greece,” Caşın said.

Caşın added that the U.S. aims to use the Greek Cypriot administration as a base for its military actions in Libya and Afghanistan and has recently increased its deployment there.

“Pompeo’s recent visits, the decision to lift the embargo and maintaining an embargo against the Turkish side of the island are not actions that serve the world peace," he said.

“The decision by the U.S. Senate has encouraged the Greek Cyprus administration to be armed. It is a step to upset the natural balance in the region. It is a conflict-rising action rather than a conflict resolution. The decision of unilaterally arming the Greek side has put the U.S. in the position of a conflict-escalating country in history," Caşın added.

In a separate development, the Greek Cypriot national guard said Saturday that it would take part in joint training maneuvers with U.S. forces and two boats.

The drills, which began Saturday and will last until Sept. 20, are taking place in the "framework of the bilateral relations between the Republic of Cyprus and the U.S."

Another point experts underlined is that the increasing influence of Russia in the region is a major factor for increasing U.S. activity there.

Abdullah Ağar, a former military officer and security expert, said that the island of Cyprus has become a field for the proxy political struggle between the U.S. and Russia.

“The U.S. realized that it made a big mistake by including Russia in the region in 2015 when Moscow became a leading actor in the Syrian civil war. The recent U.S. actions in the region are moves to compensate for this mistake," Ağar said.

Ağar underlined that Russian ships are very active in the Eastern Mediterranean and use ports in the Greek Cypriot administration, mainly in Limassol. Ağar added that Russia also aims to use the shared faith of Orthodox Christianity as an instrument to enhance cooperation between the countries as Lavrov emphasized this aspect of relations during his recent visit.

“The U.S. saw that Russia has been increasing its cooperation and military presence there and wants to prevent it.”

Yeşiltaş also said that increasing U.S. activities and presence in the region can be a card to use against Russia.

There are also rumors that the U.S. is planning to leave Incirlik Air Base in Turkey’s southern Adana province and move its military bases to the Greek islands and Cyprus.

“We don’t know what’s going to happen to Incirlik. We hope for the best, but we have to plan for the worst,” Ron Johnson, the chair of the Senate Foreign Relations subcommittee for Europe, told the Washington Examiner on Sept. 11.

Johnson noted that the U.S. wants to maintain full presence and cooperation in Turkey and would not want to “make that strategic shift.”

“We're already looking at Greece as an alternative,” Johnson said, adding that the U.S. is increasing its presence in Souda Bay on the Greek island of Crete.

Yeşiltaş said that Cyprus or Greek islands cannot be an alternative for Incirlik due to their different capacity and roles.

Located just 110 kilometers (about 68 miles) from the Syrian border, Incirlik Air Base has been a strategic element since its establishment in 1954 as it played major roles during the Cold War, the 1990-1991 Gulf War and the U.S.-led Operation Inherent Resolve targeting Daesh elements in Syria and Iraq.

Incirlik has critical operational potential against Russia, Iran and Arab countries in the Middle East. In 1975, Turkey shut Incirlik off to the U.S. for three years and limited it to the use of NATO in response to U.S. sanctions targeting Ankara over its peace operation in Cyprus.

'Turkey ready for all scenarios'

Caşın also underlined the importance of the recent “Martyr Capt. Cengiz Topel Mediterranean Storm Exercise” between the armed forces of Turkey and the Turkish Republic of Northern Cyprus (TRNC), named after a Turkish Air Force pilot who was killed during the conflict on the island in 1964.

“It is a response to the bloc against Turkey in the region and proves that Turkey is ready for all military scenarios," Caşın said.

He said that Cyprus is a key location for Turkey to provide for the security of the Eastern Mediterranean and added Ankara has to be involved in all issues related to the region.

The armed forces of Turkey and the TRNC started joint military exercises in Turkish Cyprus on Sept. 6.

After the forcible division in 1963 of the island of Cyprus by the Greek Cypriots, Turkish Cypriots suffered under a campaign of ethnic violence. In 1974, following a coup aimed at Cyprus' annexation by Greece, Ankara had to intervene as a guarantor power. In 1983, the TRNC was founded.