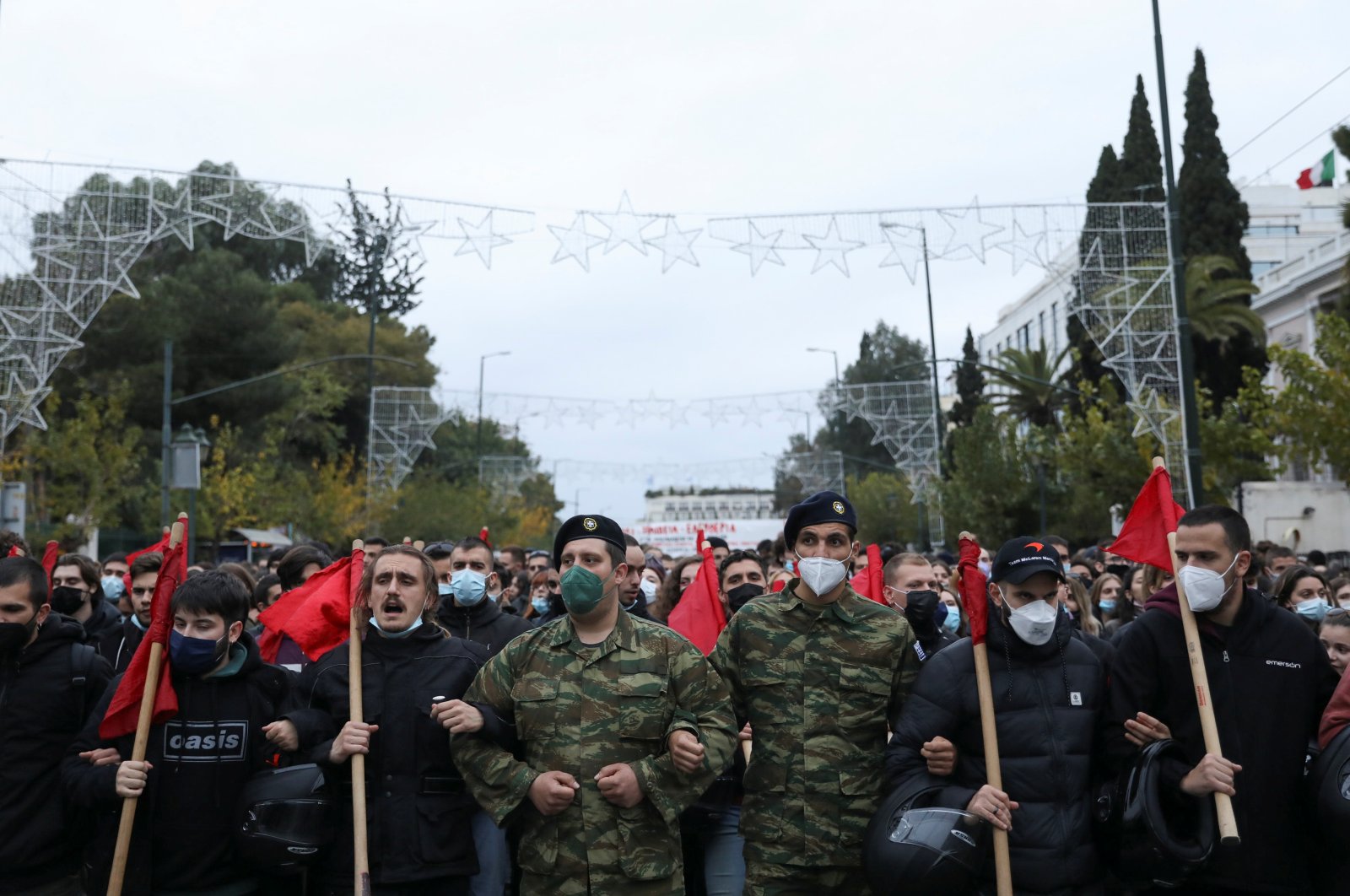 Yesterday, a significant protest was held on the streets of Athens. On Nov. 17, 1973, 34 students were killed in clashes between the Greek military and university students, who were against the “Junta of Colonels” that ruled the country at that time.

Just like then, 25,000 activists marched up to the U.S. Embassy in Athens and launched a rally, right in front of the Athens Technical University, where the events presented a stark reminder of the tragedy that took place 48 years ago.

In addition to marking the day and mourning all those who lost their lives, it also became a scene of demonstrations against the inadequacies and excessive armament policies of the Mitsotakis government and its fight against the COVID-19 pandemic.

Demonstrators harshly protested the allocation of a higher portion of Greece's national budget being allocated to armaments, which reached its peak, than on education and health.

In fact, this situation extends beyond just a protest by the Greek youth because the share of Greece's national income allocated to its defense budget today exceeds that of all NATO member states. The issue, which has also been on the agenda of Greece's Coalition of the Radical Left (Syriza) movement, which is in opposition, has long been attracting the attention of the Greek people. It is a fact that the Greek government, which has trade worth $10.5 billion within the framework of foreign military sales agreements with the United States, has almost completely opened the country's territory to U.S. bases.

The recently updated defense cooperation agreement between the United States and Greece envisages more U.S. troops deployed to a total of eight military bases, including the Alexandroupoli (Dedeağaç) base on the Turkish border and the naval and air base at the Souda Bay.

According to another recent agreement, the areas where the U.S. forces will conduct exercises will be expanded and the U.S. Navy presence will be increased at all bases it already operating.

Greece and the U.S. will likely deepen investment in existing military bases being used by U.S. forces in the country rather than expand to more locations through the renewal of the Mutual Defense Cooperation Agreement (MDCA), Greek Defense Minister Nikos Penagiotopoulos said.

Penagiotopoulos told Ta Nea daily recently that the two countries have chosen to invest in the existing four bases in Greece.

“I believe that, at this stage, the deepening of the cooperation is more important than expanding in other locations. This position obviously expresses both sides,” he said.

In recent years, beyond Greece-U.S. defense cooperation agreements, the orientation of the Greek administration to open its territories and bases to Washington comes to the forefront. So much so that the naval base in Souda Bay on the island of Crete is where logistical and operational support is provided to European Command (EUCOM), Central Command (CENTCOM) and the U.S Africa Command (AFRICOM). Larissa Air Base is where the U.S.-made MQ-9 Reapers unmanned aerial vehicles (UAVs) are deployed while the Apache and Black Hawks are deployed from the Stefanoviko base.

In addition, helicopters and U-17 aircraft have been deployed to Sedes air base in Thessaloniki. The U.S. also has unimpeded access and uses its military power in the Georgoula barracks in Volos, the Litochoro shooting range in Pieria and the Yannuli barracks in Alexandroupoli.

In light of all this information, the statement made by President Recep Tayyip Erdoğan the previous week is much more meaningful. Erdoğan said that Greece, as a whole country, has become a U.S. base.

In fact, Greece becoming a U.S. base, which Turkey is monitoring very closely, is reminiscent of the developments during the Cold War period.

Henry Truman, then-president of the United States in 1947, decided to provide Greece with $300 million in economic and military assistance and pursued a policy of eliminating the Soviet threat back then. In the face of the growing communist threat on the streets of Athens, Washington developed a policy 74 years ago that enabled the central government to get rid of communists in Greece.

However, when Turkey requested military assistance from the U.S. against the Soviet threat, in the same way, Washington reacted by requesting the closure of a number of institutions in Turkey over suspicions that they were harboring a Communist ideology.

All these developments raise a very striking question. So is the United States now surrounding Greece, a NATO member, against the threat of a Soviet 2.0 again, or is it against another NATO member, Turkey?

It is known that Washington has long been drawing the issue of Turkey's defense needs onto the political floor and making it a tool to impose sanctions and blackmail Turkey. Based on this, how can the U.S.' unconditional generosity toward Greece be explained while it refuses to pursue similar policies in Turkey?

A concrete explanation of this could be that Greece is a voluntary bouncer of the Biden administration's policies to contain Russia as Truman did in the Cold War. Greece may believe that by turning itself into a U.S. air base it can soothe its fears of a threat from Turkey, however, this idea is also unrealistic.

The Athens administration might feel safer with the U.S. bases in its country acting as a protection shield and creating the perception of a threat, but it will also see the long-term consequences of becoming a Cold War apparatus.

In fact, Athens may even engage daily in seemingly heroic acts against Turkey with the courage it receives from this force. However, Greece's adventures that are not backed by its own geopolitical or military power and do not even come close to that of Turkey will not yield profitable results in the future.

For this reason, Turkey, being Greece's neighboring NATO member, continues to recommend policies that prioritize sobriety and dialogue to the administration in Athens. Otherwise, there is no choice but to say that Greece, which does not listen to its neighbor, has not learned from history.