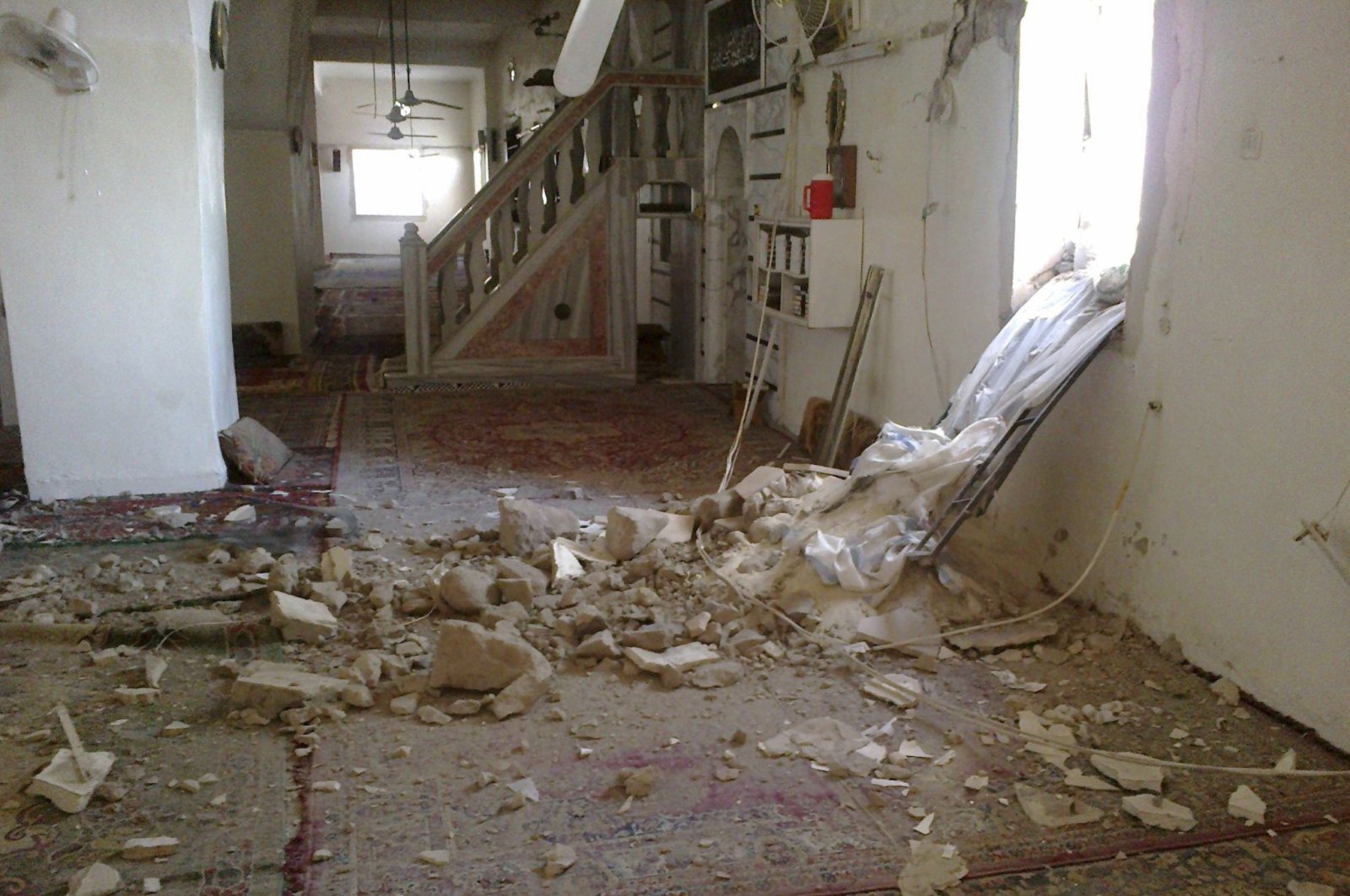 Damaged is seen inside the grand mosque after shelling by Bashar Assad regime's forces at Houla near Homs, Sept. 9, 2012.
by DAILY SABAH WITH AA May 26, 2020 11:27 am
RECOMMENDED

The Syrian National Coalition of opposition groups, widely regarded in the West as the legitimate representative of the Syrian people, marked the eighth anniversary of the Houla massacre on Monday.

On May 25, 2012, 108 people in the Houla region of Homs province, mostly women and children, were killed by forces of the Bashar Assad regime and Shabiha paramilitary militants.

"If the international community called the regime to account for massacres like Houla and al-Bayda, there would not be hundreds of massacres committed so far," Abdurrahman Mustafa, president of the opposition Syrian Interim Government, told Anadolu Agency (AA).

In 2012, the U.N. Human Rights Council overwhelmingly voted to condemn Syria for the massacre.

Former U.N. Secretary-General Kofi Annan, who was the U.N.-Arab League special envoy to Syria at the time, said he was "shocked and horrified by the tragic incident."

"Those responsible for these brutal crimes must be held accountable," Annan had said.

Syria has been locked in a vicious civil war since early 2011 when the regime cracked down on pro-democratic protests.

Hundreds of thousands of innocent people have been killed in the nine years of brutal civil war that have riddled Syria. Yet, these attacks were not carried out through conventional weapons alone as the Assad regime repeatedly used chemical weapons and no legal process is being conducted for these crimes. According to data supplied by AA, the Assad regime has used chemical weapons in Syria at least 216 times over the last nine years. The regime conducted its first major chemical attack on Aug. 21, 2013, in the eastern Ghouta region of Damascus. The onslaught, which killed over 1,400 civilians, raised international concern at the time. Former U.S. President Barack Obama had said the use of chemical weapons was a "red line," yet the regime continued using them after his statement.

Despite the fact that it has been almost a decade since the war started, the regime's existence still poses a significant threat to civilian lives in the country while countries like Turkey try to put an end to the Syrians' suffering. In March, the regime's monthslong attacks on northwestern Idlib province were halted thanks to a cease-fire deal reached between Turkey and Russia, enabling hundreds of thousands of civilians to take a breath by putting an end to both forcible displacement and killing. Still, although a possible catastrophe in Idlib has been prevented, other regions in the war-torn country are not exempt from the regime's brutality.

The Syrian opposition expressed concern over the Syrian regime elements' escalation in the southern province of Daraa on Thursday, warning that the civilians in the region could face a "massacre."

Mustafa spoke to AA on the issue and said that despite being under regime control since 2018, the locals in Daraa continue to resist Assad's rule and his supporters.

"In order to oppress the rising opposing voices, the regime and its militia are deploying troops to Daraa," Mustafa said.

Criticizing the regime's policy of intimidation against civilians, Mustafa warned that the deployment of the military to the region would mean even greater risks for the locals.

"We are concerned that the bloody-minded Syrian regime, which has committed war crimes in Syria, will cause a massacre in Daraa," Mustafa underlined.

Back in 2011, upon the flow of the Arab Spring's spreading to Syria, a group of students in Daraa began the Syrian opposition movement by writing "Ejak el door ya doctor," meaning "Your turn, doctor," on a school wall.