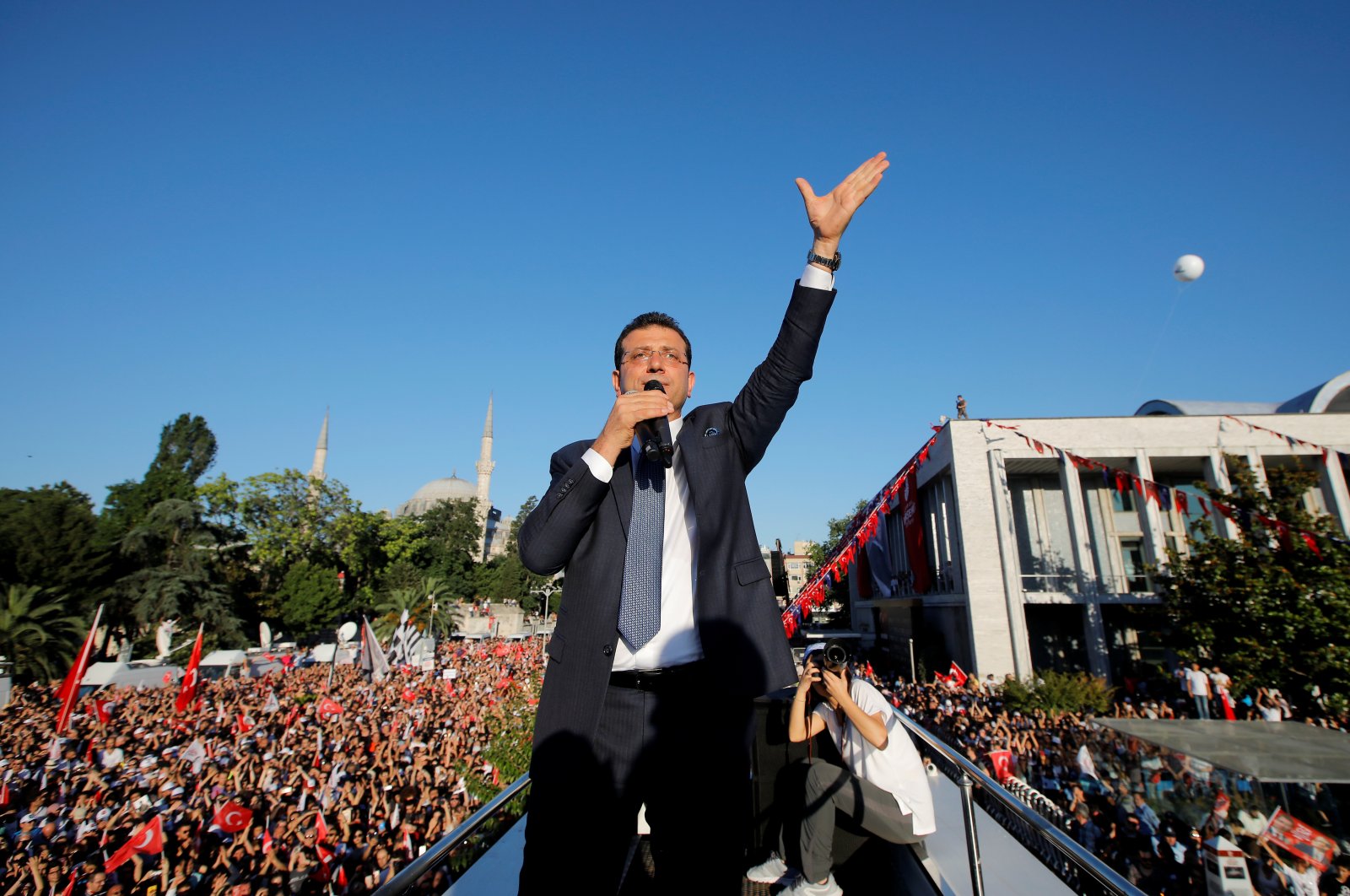 Imamoğlu won the June 2019 local elections with an impressive campaign and promised hope for millions of Istanbul residents, but his term in office has been overshadowed by polemics and controversies rather than hard work and progress emphasized in his campaign

“If there is Imamoğlu there is hope” and “Everything will be alright” were some of the mottos used by Ekrem Imamoğlu as he met with constituents across Turkey’s largest metropolis as the candidate of main opposition Republican People’s Party (CHP). But his short term in office has been dominated by controversies and polemics that led to criticism of the mayor.

In his election campaign, Imamoğlu used effective campaigning strategies and had made bold promises that seemed to appeal to the majority. He pledged to keep the prices of services provided by the municipality low and offer discounts by utilizing funds and resources, fight poverty in the city, cut municipal overspending, not fire any municipal staff and embrace all citizens irrespective of their background.

In less than a year, he seems to have broken most of these promises by ramping up prices of some vital services, firing over 1,000 staff and embracing extravagance, to the disappointment of many voters.

The mayor’s term got off on the wrong foot, as he displayed 731 vehicles owned by the municipality in Yenikapı Square, claiming that they were used by staff indicating a wastage of municipal resources. However, an investigation by a parliamentary commission has concluded that they were service vehicles rather than staff vehicles as claimed by Imamoğlu. Shortly after returning 730 vehicles to “save resources,” the Istanbul Metropolitan Municipality (IBB) initiated a tender to rent 997 cars for the city’s water administration ISKI. The move came under fire as the daily rent of returned cars was TL 43 ($6.41), while the price was TL 156 for the new cars.

“If there is a waste of public resources, we will deal with it. The municipality's job is not (to) show business," Interior Minister Süleyman Soylu had said about Imamoğlu’s stunt.

Imamoğlu’s performance has disappointed not just the voters, but also his own party, who thought he would make a breakthrough in Turkish politics, Ihsan Aktaş, one of the founders of GENAR Research Institute, told Daily Sabah.

“The fact that Imamoğlu’s performance has not met expectations has started to bring the (main opposition Republican People's Party) CHP down as well,” Aktaş said, adding that Imamoğlu has not produced anything but “polemics” during his term.

Contrary to his pledge, Imamoğlu fired some 1,400 staff previously hired by the previous administration for their political ideology.

"We did not commit any crime there. We served Istanbul; we became the servants of Istanbul," former security staff Mehmet Akgün told reporters as he protested in front of the CHP headquarters in Istanbul in September 2019. Others who were protesting beside him had claimed they were fired without proper notification and any justification. The protests lasted around seven months and ended with the reinstatement of some 200 workers back to their duties.

Offering affordable and accessible services was another pledge that sounded appealing to almost all residents of the metropolis. His move to extend the city’s public transit hours on select lines was welcomed by many commuters. However, the mayor ramped up public transit prices by 35% just after seven months of taking office in the city where over 1.3 billion commuters used mass transit services in 2019.

In February, the mayor claimed the hike was "far below the costs" of operating the mass transit and said they simply "wanted to sustain services." "There has not been a rise since May 2017, but you cannot cope with the rising costs," he said, as he acknowledged that the price hike was not welcomed by the public.

“I would like to tell the people that I am sorry in that regard,” the mayor apologized to people.

During the election campaign, Imamoğlu had participated in a transportation solution meeting in Istanbul in June and had said that he aims to provide accessible services for all.

“We want the people to receive secure, comfortable, punctual, accessible and affordable transportation services and will assume responsibility as the municipality and support the sector,” Imamoğlu had said.

On Nov. 28, 2019, Imamoğlu introduced a bill to increase water prices by 20% but the bill was rejected by the Justice and Development Party (AK Party) and Nationalist Movement Party (MHP) councilors. Additionally, Istanbul Halk Ekmek (IHE), which sells affordable bread, raised the price of bread by 40% during Imamoğlu’s term, while ISPARK, which provides parking services across the city, also ramped up their prices by as much as 40% in January. Another IBB trademark, Hamidiye Water, which sells bottled and other types of water at affordable prices across the city, also increased its prices by 20% in September 2019.

The prices of products sold at municipality-owned BELTUR cafes also saw a 20% hike in September, contrary to Imamoğlu’s promises to provide affordable services.

Likewise, In April, Imamoğlu came under fire for his overpriced food aid campaign during the COVID-19 pandemic, as the actual cost of the package was much lower than the requested price. The food package in question was sold for TL 150, but it cost around TL 83 to TL 104 in Turkish supermarkets. Upon criticism, IBB Spokesman Ongun said the package also included a “hygiene package” that had not been specified in the details of the aid package.

Besides the price hikes, Imamoğlu also came under fire for claiming that a large group of commuters organized by the AK Party allegedly boarded an Istanbul bus on a weekend curfew in April to make his administration look like they were not doing their job properly. His press secretary Murat Ongun even called it “organized malice,” but a detailed investigation has revealed that the people who boarded the bus were all essential workers who had no connection to each other and were using public transit to reach their jobs.

Aktaş highlighted that Imamoğlu’s campaign had emphasized that they would effectively use municipal funds in favor of the people but have been making borrowing demands since he took office.

“It will take them some four or five years to get a hang of what it is like to govern Istanbul,” Aktaş said. However, according to insiders, while the municipal authorities are biased against the projects initiated by their predecessors and label them as “defective,” they are actually surprised at how organized and responsibly the AK Party administration was, Aktaş noted.

Among those disappointed with Imamoğlu is the family of firefighter Emircan Çolak, who was killed during a drill in Kadıköy district also criticized the mayor for not bothering to contact them for their loss, his brother Sezayir Çolak told Demirören News Agency (DHA) on May 13.

“Even the president called us, and we thank him for that, but Imamoğlu did not call,” Çolak said.

The county's religious minority, Alevis were also angry about a brochure for discriminating against them. On the occasion of April 23 National Sovereignty and Children's Day, the IBB sent around 100,000 packages for children quarantined at home as part of COVID-19 prevention measures. The packages contained storybooks, snacks, games and educational material, according to the IBB, but the Alevi minority was not pleased about the content of one of the brochures, which portrayed Alevis as a different religion rather than a sect of Shiite Islam. Upset about the book, the president of the Türkmen Alevi Bektaşi Foundation, Özdemir Özdemir, filed a criminal complaint against the mayor as he said it tries to portray Alevis as if they are from a different religion like Christians and Jews, rather than a part of Islam. The founding president of Tunceli Munzur University, Durmuş Boztuğ, also criticized the brochure for its content, saying that he condemns and protests it. “Alevi faith is a part of Islam,” he said.

Other criticism of Imamoğlu centered on a badly timed lavish ski vacation after a major earthquake shook eastern Elazığ province, killing 41 people. Critics said the mayor visited Elazığ for a photo opportunity before heading to an upscale hotel for an extravagant ski vacation with his family in Erzurum, at a time when hundreds of people suffered after losing their homes and loved ones in the tragic earthquake.

Meanwhile, Imamoğlu did not make it on the list of Turkey’s most successful mayors in a recent survey conducted by the ORC Research Center released on May 13. Gaziantep Mayor Fatma Şahin topped the list with 62.7%, followed by Eskişehir Mayor Yılmaz Büyükerşen, while Ankara Mayor Mansur Yavaş became the sixth with 56.6%.

Considering Imamoğlu won the election with the support of some voters who were on the fence, Aktaş says he may lose that support soon if he does not start concrete work and projects.

“Imamoğlu had other political goals without excelling as a mayor first, but the people want to see politicians’ performance in their office first,” Aktaş said, adding that while Imamoğlu frequently complains about not receiving support from the government, Erdoğan went through a similar term as Istanbul mayor between 1994 and 1998, but that did not stop him from working hard and getting the job done.

“He worked in an extremely disciplined manner for Istanbul and gained the praise of then-President Süleyman Demirel, who said ‘this is how a mayor should work’ after seeing Erdoğan’s performance,” Aktaş said, noting that while being involved in arguments and controversies may interest CHP voters, it does not appeal to a large audience.

Aktaş noted that while Imamoğlu’s main voter base, which consisted of the CHP and the Peoples' Democratic Party (HDP), may enjoy his polemics now, those outside his party and voted for him will start expecting services; though, for now, they do not experience a lack or shortage because the AK Party administration has performed really well during their term.

In the long run, Imamoğlu is expected to change his rhetoric from polemics and controversies to concrete action and living up to the standards and expectations of Istanbulites, according to Aktaş.