Presidential system only reform in Turkey's quest for democracy realized by nation's will: Erdoğan 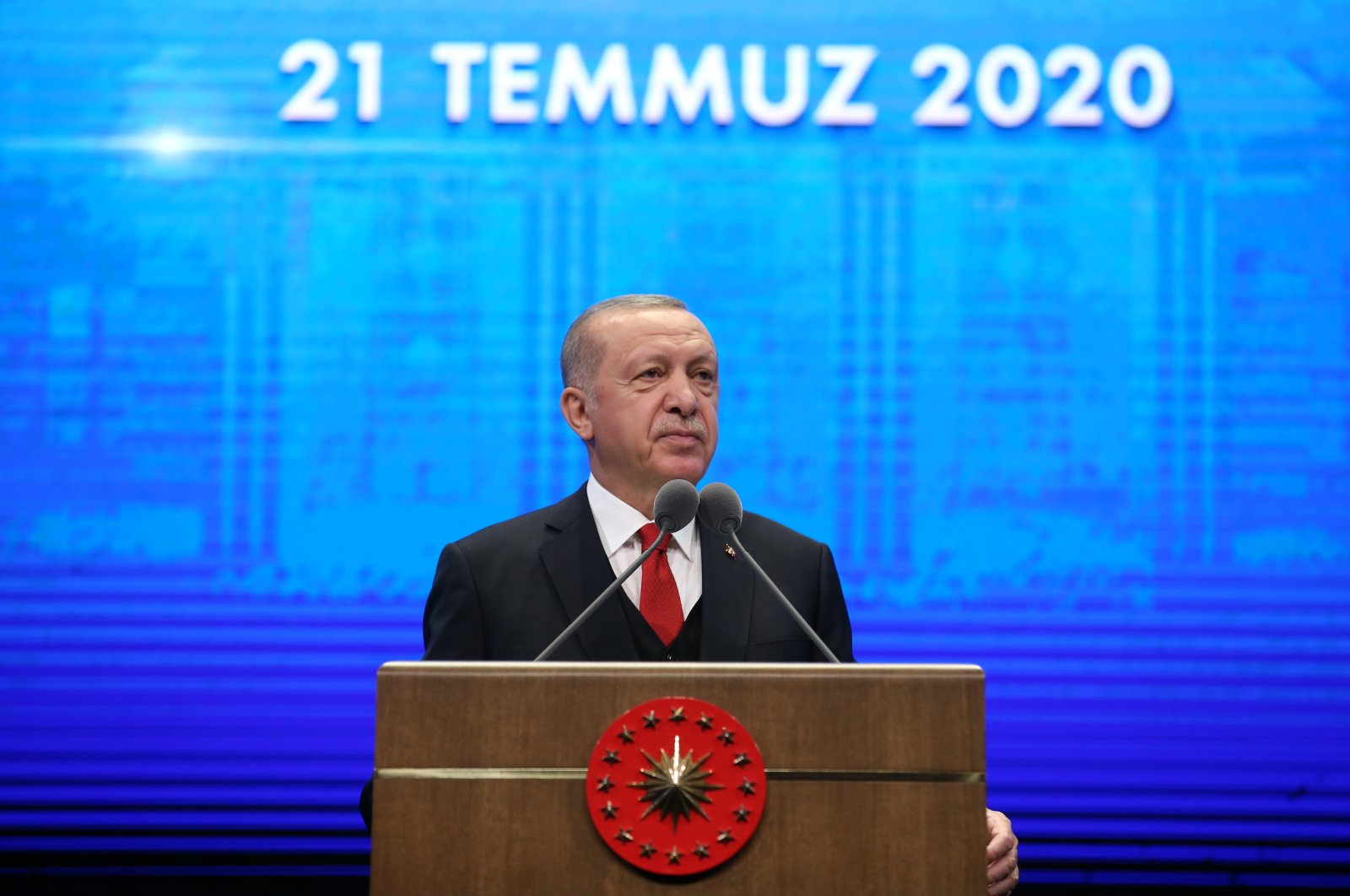 The presidential system in Turkey has seen two years of developments in many areas. Having been elected the executive president in 2018, Erdoğan has also been very active in diplomacy. Speaking in Ankara, he emphasized Turkey's quest for democracy and the new system's success

The presidential system is the only administrative reform that has reflected the people’s will directly during Turkey's 200-year democratic struggle, President Recep Tayyip Erdoğan said Tuesday.

Speaking during the 2-Year Presidential Government System Evaluation Meeting at the Presidential Complex in the capital Ankara, Erdoğan underlined the new system's importance for the nation.

"The presidential government system is the only administrative reform that has been carried out directly by the national will in our 200-year quest for democracy," Erdoğan said, referring to the referendum that enacted the presidential system. "All other changes happened in either the atmosphere of war or other extraordinary circumstances," he added.

"The owner of this reform, which is in parallel with the core values of democracy and the republic, is the nation itself," Erdoğan stated.

As the country switched to the new system, Erdoğan also announced his Cabinet, in which many of the ministers were not previously politicians.

Even though Erdoğan said there is no plan to make a change in the new system, he opened the door for amendments, stressing that he can make an evaluation with the chairman of the Nationalist Movement Party (MHP), Devlet Bahçeli, AK Party's partner in the People's Alliance.

"When we find a better alternative, we are both politically and emotionally willing to change for the better," he said.

Erdoğan also acknowledged that there may be some problems while Turkey is adapting to the new system.

"As we change our system of governance, some problems arising from the changes in politics and social amendments are inevitable," he said.

Touching upon the country’s foreign policy, the president also said that Turkey will never cease to come to the aid of oppressed people all around the world, reiterating the country’s support for the Libyan people against putschist Gen. Khalifa Haftar and its backing of Azerbaijan against Armenian aggression.

“We are closely following the recent developments in Libya. No one should be enthusiastic; we won't let (Haftar and his supporters) take the upper hand,” he said.

Erdoğan added that Turkey has provided medical equipment to 136 countries and four international organizations during the pandemic.

Diplomacy was high on Erdoğan’s agenda after being elected as the executive president, in place of a largely ceremonial presidential position. Since being elected, Erdoğan has taken 24 official visits abroad.

Erdoğan also attended summits during his first two years as the executive president. He attended the G-20 Leaders Summit in Japan, the United Nations General Assembly in the U.S., the NATO Summit Meeting of Heads of State and Government in the U.K., the Libya conference in Germany and many other meetings via videoconference during the COVID-19 pandemic.

Erdoğan on Tuesday said the Turkish government has been strengthening the reflexes of the country’s economy against global turbulence.

“We are strengthening the immune system of our economy against global turbulence and taking measures against malevolent financial initiatives,” he noted.

He stressed the country prevented malevolent steps taken against the Turkish lira with swap precautions.

Even though the dollar and euro have seen highs against the lira, especially after the coronavirus pandemic, the Turkish economy has been one of the few to experience milder effects of the crisis.

“We brought inflation, which hit over 25% with speculative attacks, down to single digits,” Erdoğan said.

The annual inflation in June surged to 12.62%, up from 11.39% in May, according to the Turkish Statistical Institute (TurkStat). Month-on-month, consumer prices rose by 1.13%.

The president added that interest rates in the country have declined all the way down to 8.25% from 24% in July last year, as the Central Bank of the Republic of Turkey (CBRT) had cut its one-week repo rate by 1,575 basis points in nine consecutive meetings since then, in a muscular bid to stimulate the economy and more recently to counter the economic downturn brought on by the outbreak.

“Over the last two years, our country has jumped from 66th to 33rd place in the World Bank’s Ease of Doing Business ranking,” Erdoğan added.

In tourism, the number of foreign visitors approached 52 million in 2019, up from over 46 million in 2018, he said. “Even though just like the rest of the world we cannot meet our goals in tourism this year due to the pandemic, we will hopefully make up for our losses as soon as possible," Erdoğan said.

The presidential system in Turkey has also seen the launch of many landmark projects.

In January of this year, Erdoğan hosted his Russian counterpart Putin, Bulgarian Prime Minister Boyko Borissov and Vucic in Istanbul for the launch ceremony of TurkStream, which has created an alternative route for Russian gas to reach European markets, bypassing the transit through Ukraine, with the aim of contributing to the regional supply security.

Described as the epitome of the energy cooperation between Turkey and Russia by both Erdoğan and Putin, TurkStream aims to provide uninterrupted and direct gas supply to Turkey and southeastern European countries from Russia.

Many city hospitals, which have become Turkey’s backbone in its fight against the virus, have also been established during Erdoğan’s executive presidency.

Turkey’s health care system, which has undergone a major transformation since the early 2000s, is credited with an exemplary fight against the outbreak. Along with widespread access to imaging, city hospitals that serve as modern medical complexes boost Turkey’s health care capacity in times of crisis.

The Turkish public witnessed another milestone as a groundbreaking ceremony for the construction of Turkey’s first domestic car plant was held Saturday in northwestern Bursa province, dubbed the country’s automotive capital.

The event came after the country unveiled prototypes of the first fully domestically produced car in December.

During the ceremony, Erdoğan said the construction of the huge production complex "will radically change the perception of a factory in people's minds.”

The national car project will see a fixed investment of over TL 22 billion, and the factory will start mass production in 2022 with an annual capacity of 175,000 units.

Istanbul Airport also entered into service during the executive presidency. At full annual capacity of 200 million passengers – with the completion of all four phases with six runways by 2028 – the airport is set to become a global aviation hub bringing in more than 100 airlines and flights to over 300 destinations around the world.

When all of its construction is completed, it is set to become the world’s biggest airport.

Istanbul Airport officially opened on Oct. 29, 2018, the 95th anniversary of the founding of the Republic of Turkey and took over air traffic from the country's former gateway Atatürk Airport on April 6, 2019.

The airport will contribute $40 billion to the economy when all phases are completed.

Istanbul Airport hosted 25% of the total passengers traveling through Turkey in 2019. The airport welcomed some 52.6 million air passengers in 2019, according to the data by the General Directorate of State Airports Authority (DHMI).