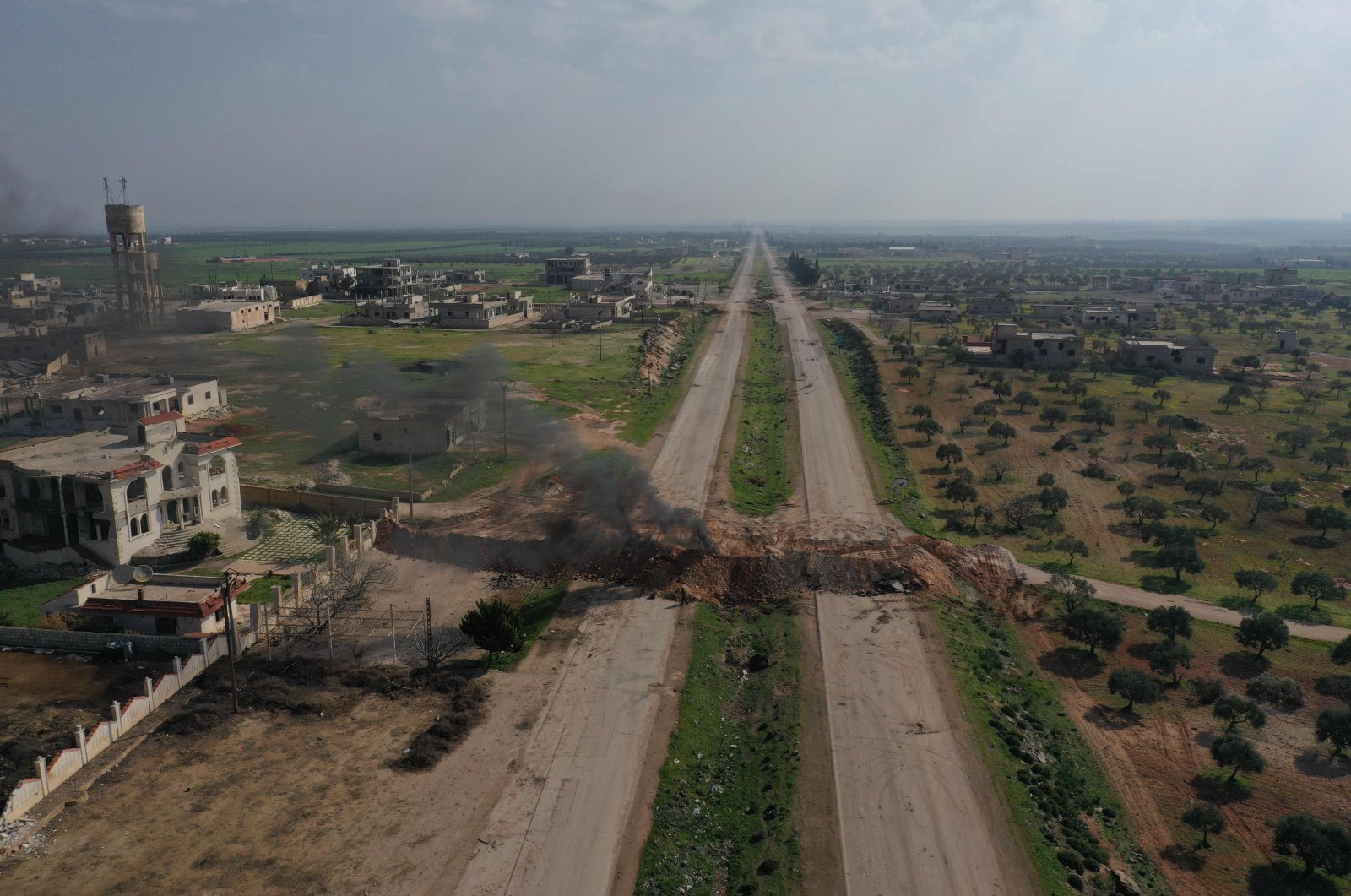 A drone image taken on March 16, 2020, shows a blocked section of the M4 highway, which links the northern Syrian provinces of Aleppo and Latakia. (AFP Photo)
by Dilara Aslan Mar 17, 2020 11:39 am
Edited By Dilara Aslan
RECOMMENDED

Kesab was separated unlawfully from southeastern Turkey’s Sanjak (Hatay) in 1932 and linked to Syria’s Latakia, an expert said in response to claims that Hatay was "stolen" by Turkey.

“In 1932, the French Mandate Administration separated Kesab, which was part of the Sanjak/Hatay independent region, violating article 22 of the mandate contract. According to the contract, the mandatory state would pay maximum attention to preserve the territorial integrity of the region it administrated,” Cemil Doğaç İpek, an expert in international relations, told Daily Sabah.

Earlier this month, Russian news agency Sputnik published a controversial story, titled "The ‘Stolen Province’: Why Turkey Was Given A Corner Of Syria By France 80 Years Ago," referring to the southeastern Turkish province of Hatay, which was reclaimed from France in the Independence War.

As part of the National Pact, Hatay remained out of Turkish bounds after the signing of the Ankara Agreement with France in 1921.

In 1936, France transferred the rights of Hatay to the Damascus administration. Turkey, meanwhile, called for it to become an independent region.

Turkey conducted a military buildup on the border in Hatay in 1938, and a Turkish governor was appointed to the region. On July 5, some 5,000 Turkish soldiers entered Hatay.

In 1939, France withdrew troops from the region. It became a part of Turkey after a unanimous decision by the Hatay Assembly on June 23 the same year. The resolution was endorsed by France.

Following the controversial news article, which drew harsh reactions from both the Turkish people and experts, police briefly detained the editor-in-chief of Russia’s Sputnik Turkiye news agency and staffers for "insulting the Turkish nation, Turkish republic and state institutions," and "disturbing the unity of the state and the solidarity of the country," according to sources in the prosecutor's office.

“Especially following the start of the Syrian civil war in 2011, Armenians from several villages of Kesab sought refuge in Hatay, Turkey. It is meaningful that Armenians chose to come to Vakıflı village at the border of Hatay whereas they could go to Lebanon. The fact that Armenians of Kesab again see Turkey as a safe place to seek refuge in their difficult times is displaying that the region is Turkey’s natural extension and that it needs Turkey’s guarantorship,” İpek elaborated further.

The expert also explained that a French mandate was established after the Ankara Agreement in 1921 and that the mandate called for giving Kesab to Latakia, separating it from the Sanjak of Alexandretta in 1932. He said Turkey could object to this situation, putting forth that unilateral decisions were taken in the field of international law.