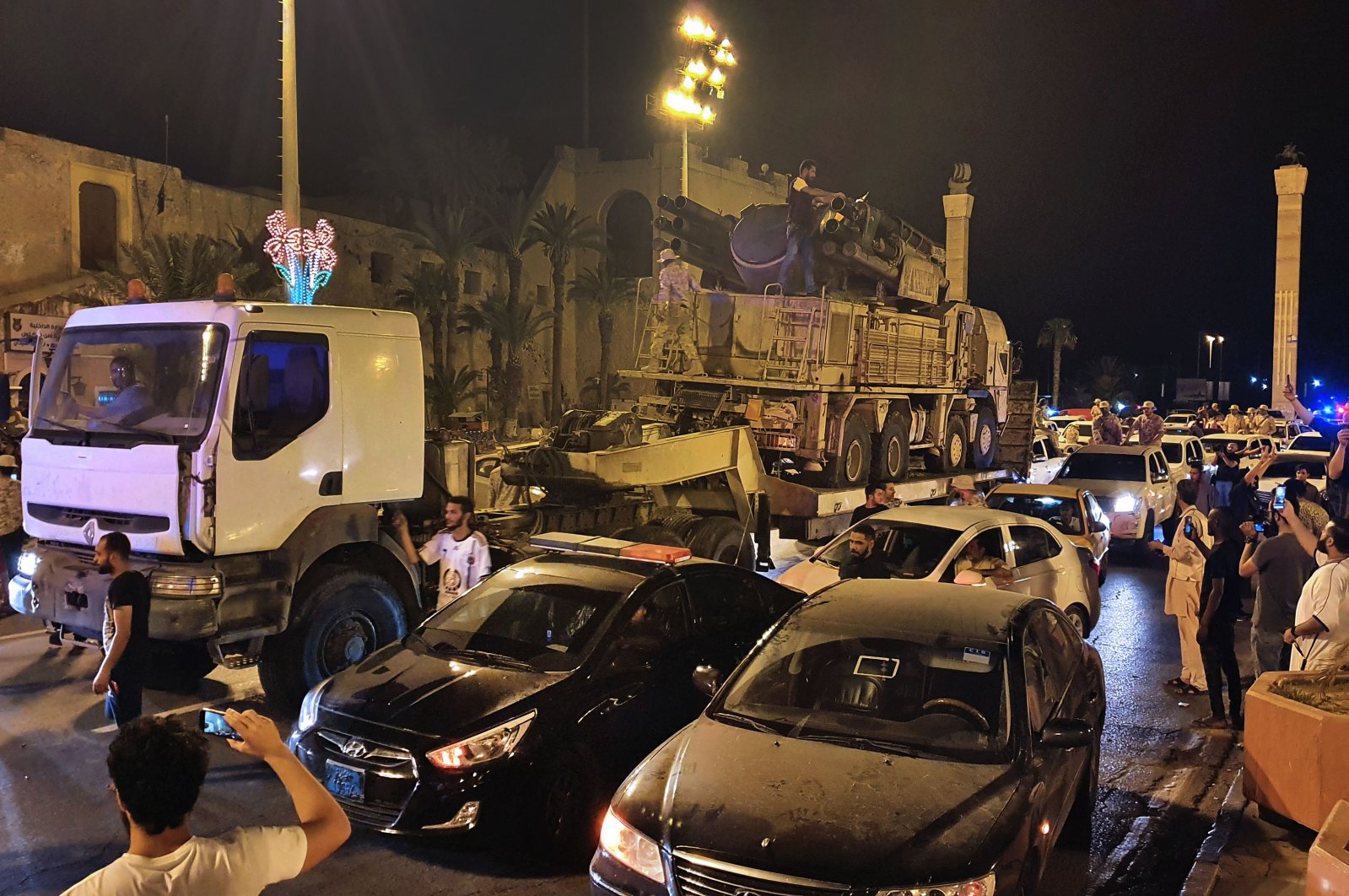 Forces loyal to Libya's UN-recognised Government of National Accord (GNA) parade a Pantsir air defense system truck in the capital Tripoli on May 20, 2020. (AFP Photo)
by Compiled from Wire Services May 27, 2020 11:13 am
RECOMMENDED

Russian Foreign Minister Sergei Lavrov on Tuesday told an ally of Libya's putschist Gen. Khalifa Haftar that Moscow has backed an immediate cease-fire and political talks that would culminate in united governing authorities.

Lavrov conveyed that message to Aguila Saleh Issa, speaker of the Libyan House of Representatives, in a phone call, Russia's Foreign Ministry said in a statement.

Issa is aligned to Haftar who controls the east of the country which opposes the internationally recognized Government of National Accord (GNA) in Tripoli.

The U.S. military earlier on Tuesday accused Russia of deploying fighter aircraft to Libya to support Russian mercenaries fighting for eastern forces, adding to concerns of a new escalation in the conflict, but a Russian lawmaker has rejected the claims.

Russia has not sent military personnel to Libya and the Russian upper house of parliament has not received a request to approve such a dispatch, Interfax on Wednesday cited Vladimir Dzhabarov, first deputy head of the upper house's international affairs committee, as saying.

Meanwhile, the Libyan Army is advancing in the southern part of Tripoli in areas occupied by militias of Haftar, according to a military source.

The army is heading to areas of the old Tripoli airport, Remle region and the Naqliyya military camp, located 25 kilometers (16 miles) south of the capital.

Operation Volcano of Rage, run by the army, said three military vehicles belonging to Haftar's militias in the Kazirma region were rendered inoperable by howitzer cannons.

Army spokesperson Col. Mohammed Gununu said Tuesday that 15 Haftar militias and a military vehicle were captured by troops in the southern al-Halle region of Tripoli.

The legitimate government has been under attack by Haftar's forces since April 2019.

His illegal forces in eastern Libya have launched several attacks to capture Tripoli with more than 1,000 killed in the violence.

The government launched Operation Peace Storm on March 26 to counter attacks on the capital. Following the ouster of late ruler Moammar Gadhafi in 2011, a new government was founded in 2015 under a U.N.-led political deal.

With the continuous defeats of Haftar by GNA forces, parliament speaker Aguila Saleh announced a proposal in late April to reach a political solution to the crisis.

Immediately after the proposal, Hafter declared himself the sole ruler of Libya, dropping the U.N.-brokered Skhirat Agreement signed in 2015 between warring sides. The move was condemned by international actors and regional allies.

Haftar, however, was unable to overthrow the Tobruk-based House of Representatives and speaker Saleh, who was seen as a subordinate of Haftar, as he enjoys major tribal support in eastern Libya.