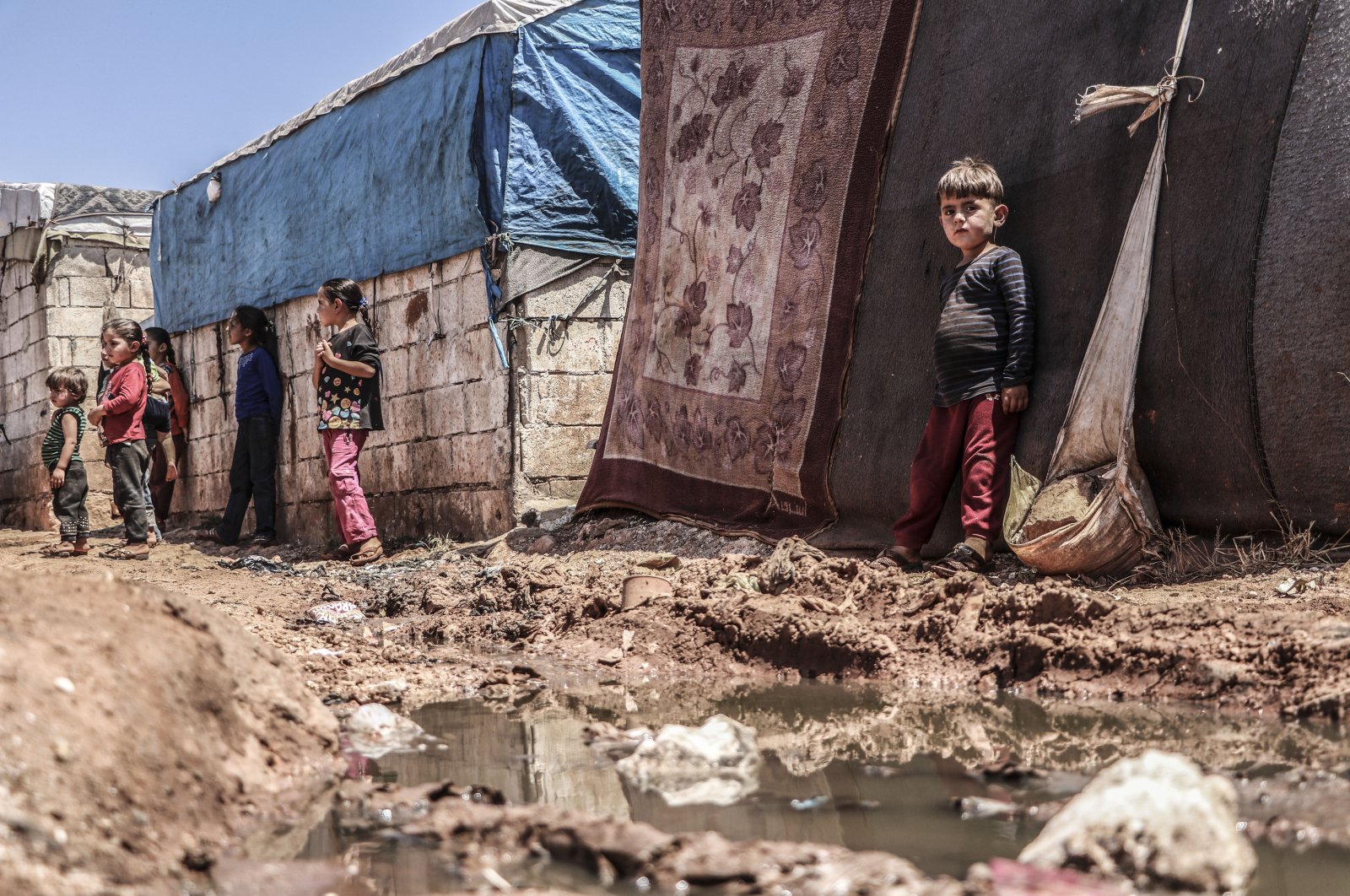 Children are seen in a tent camp, where they live under extremely unhygienic conditions and the containment of the spread of COVID-19 seems almost impossible, in Idlib, Syria, July 7, 2020 (AA Photo)
by DAILY SABAH Jul 07, 2020 11:59 pm
Edited By Dilara Aslan

Despite rising malnutrition, food insecurity and warnings of a possible famine in Syria, Russia, in support of its ally Assad, and China have vetoed a U.N. mandate which would extend cross-border aid to the Syrian people in desperate need

As expected by the United Nation ahead of negotiations, Russia and China on Tuesday vetoed a U.N. Security Council resolution that would have extended authorization for cross-border humanitarian aid in Syria for a year.

Beyond Russia and China, the other 13 council members voted to approve the draft, diplomats said.

Though Russia rejected the draft resolution of Germany and Belgium, two of the council's non-permanent members, which would have allowed aid to continue to pass through two points on the Turkish border without interference from Damascus, it swiftly proposed a more limited extension.

During negotiations, Moscow had asked that the extension be limited to six months, rather than a year and that it only be allowed at one border crossing, not two, they said.

"The draft resolution has not been adopted," Germany's U.N. Ambassador Christoph Heusgen, the acting president of the body in July, confirmed in a letter to Council members.

"It is sadly no surprise that Russia and China look for every opportunity to support the murderous Assad regime and its campaign of brutality against the Syrian people. Once again the voices of the Syrian people, humanitarian experts, and the Secretary-General calling for increased cross-border assistance to Syria have fallen on deaf Russian and Chinese ears," U.S. Ambassador to the U.N. Kelly Craft said in a written statement Tuesday, adding that by choking off humanitarian aid, Russia and China share "full responsibility for the suffering and deaths sure to follow."

Craft further said it was clear that Russia and China see the U.N. Security Council as just another tool to advance their narrow national agendas at the expense of millions of innocent Syrian women, children and men who do not have the means to feed, shelter or provide necessary medical care for their families.

The current U.N. authorization, which has been in effect since 2014 with periodic extensions, expires Friday.

Immediately after the vote, Russia proposed its own draft resolution. Obtained by Agence France-Presse, it repeats the call for a six-month extension, underlines the improvement in the delivery of humanitarian aid under the control of the Syrian regime and excludes one of the two entry points into Syria, Bab al-Salam, from the mechanism. The results of a vote on that resolution will be known Wednesday.

The Bab al-Hawa crossing point allows for shipments of humanitarian aid to the 3 million to 4 million people living in the opposition-held Idlib region.

In January, Russia scored a victory for its close ally Bashar Assad in Syria, using its veto threat to force the Security Council to adopt a resolution reducing the number of crossing points for aid deliveries, from Turkey to the country's northwest, from four to just two.

Russia has advocated ending all cross-border aid to Syria, arguing it undermines Syria’s sovereignty and that the situation on the ground has changed since the original resolution passed in 2014. U.N. operations being dependent on the regime, however, would aid accelerating Russia’s push for the normalization of the Assad regime and undercut international efforts to foster a lasting settlement to the Syrian conflict.

"Russia and China have put Syrian lives on the line, prioritized politics over humanitarian principles and left the U.N. Security Council not only paralyzed but unable to fulfill its core mandate. The use of the veto has put millions of Syrian people at risk,” David Miliband, head of the International Rescue Committee wrote on Twitter late Tuesday, while Amnesty International in a written statement declared the veto as "despicable."

"What is also regrettable is the fact that the crossing point of al-Yarubiyah in north-east Syria seems to have been sacrificed along the way in the search for a compromise with Russia and China," said Sherine Tadros, the head of Amnesty International’s U.N. office. "The members of the Security Council must hold firm. There are over one million Syrian civilians in those areas that rely on that crossing point for the delivery of aid. With rising cases of COVID-19 in Syria, this aid is more vital than ever. Will the Security Council act to help them, or will they be abandoned?"

Amid rising malnutrition and food insecurity and the World Food Programme’s (WFP) warnings of a possible famine in Syria, humanitarian aid is essential as the U.N.'s presence also provides legal cover for many international nongovernmental organizations (NGO) operating in the country's northwest.

Syria's war has devastated the country's economy since 2011, plunging 80% of its people into poverty, according to the U.N. For years, many stakeholders have said Assad has ignored the needs and safety of the Syrian people, only eyeing further gains of territory and crushing his opposition. With this goal, the regime has for years bombed vital facilities such as schools, hospitals and residential areas, causing the displacement of half the country’s population. The situation is especially critical in opposition-controlled areas in the northwestern provinces of Aleppo and Idlib, regions the Assad regime has vowed to take back. With almost 50% of the nation's health facilities out of service, the Syrian people are also extremely vulnerable to the coronavirus pandemic.

Human Rights Watch had previously documented how restrictions on aid from Damascus and Iraq are preventing medical supplies and personnel needed to contain COVID-19’s spread among the millions of people in northern Syria.

The risk of an outbreak is especially high and most alarming in Syria's northwest, where overcrowded settlements are teeming with fresh arrivals and many of the displaced are forced to sleep in freezing temperatures in open spaces. Northwestern Idlib and Aleppo provinces, out of the control of the regime, have been the target of an offensive by Assad that started in December and continued for months until Turkey and Russia brokered a cease-fire in March. The assault on the last opposition bastion has uprooted nearly 1 million people, an incident described by the U.N. as the biggest one-time displacement in the war-torn country since the conflict erupted in 2011.

Idlib is a strategic location, sitting on the border with Turkey and Latakia province, a regime stronghold on the Mediterranean coast and the heartland of Assad's clan.

Cilvegözü gate, a relief for Syrians

The Cilvegözü border gate in southern Turkey’s Hatay province has been acting as a humanitarian bridge for Syrians in need for almost nine years. Several NGOs in Turkey have been sending aid through the gate to the Syrians. In the first six months of the year, 9,449 trucks of aid sent by Turkish NGOs have crossed the border. The nation's aid organizations have stepped up their efforts for the Syrian people with the spread of COVID-19 and the economic crisis taking place in Syria. The trucks mostly contain food, hygiene packages and clothes. The U.N. has also been using the border gate for years.