Turkey running out of patience with Assad regime, Erdoğan says 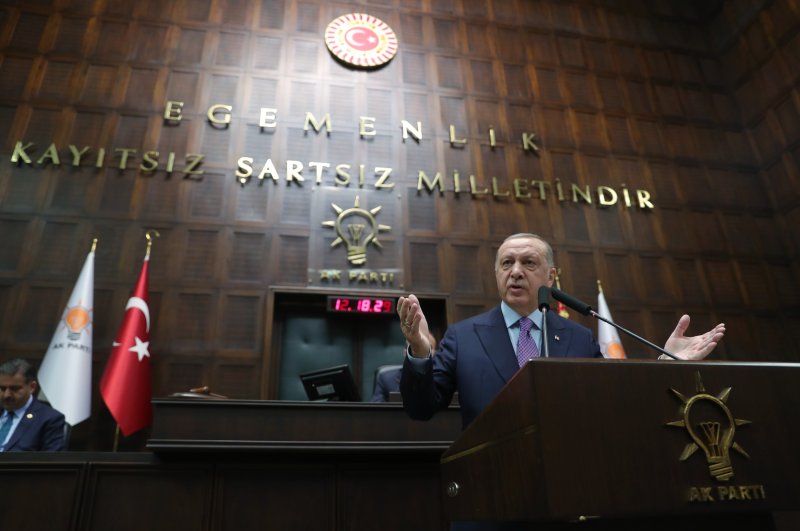 Turkey is running out of patience with the Assad regime forces besieging the Turkish observation posts in Syria’s Idlib as the deadline for the regime is approaching, President Recep Tayyip Erdoğan said Wednesday.

“Turkey has been trying to facilitate all efforts to prevent a humanitarian crisis in Syria’s Idlib, while Russia refuses to see the grave situation,” the president said, adding that Turkey demands the regime forces end their attacks as soon as possible and retreat behind Turkish observation points.
“Our deadline for the regime is approaching. After the end of the month, we will do anything we can to secure our observation points,” Erdoğan said, adding that Turkey will not take a single step back and push the regime out of the delineated zone.
Erdoğan noted that Turkey already hosts some 3.7 million Syrian refugees and cannot handle another million heading toward its borders.
Erdoğan’s comments came as Turkish and Russian delegations held a meeting to find a solution to the Idlib crisis on the same day.

The Turkish president has been criticizing Russia for offering continuous support to the Assad regime, which is further deteriorating the humanitarian situation in Idlib.

He continued by saying that one of the major problems now is that Turkey is unable to use the airspace over Idlib, which is controlled by Russia.

"Hopefully, we will find a solution soon," he said.

Turkish and Russian officials held two rounds of talks without reaching a concrete solution, as Turkish officials said they were unsatisfied with a Russian proposal for northwest Syria's Idlib. The talks were prompted by a recent escalation in Idlib in which Assad forces killed 13 Turkish soldiers.

Ankara has condemned Russia's policy of seeking to take over the territory with little care for the fate of its people, noting that the country was determined to not step back from the Sochi agreement and plans to take all necessary steps to end regime aggression.

Turkish officials have also highlighted that Ankara is not looking to gain territory but is, in fact, seeking an end to the humanitarian crisis and displacement of refugees, and would make no concessions on its observation points.

The Russian-backed Assad regime has been on the offensive since December to capture and reopen the M5 highway, held by the opposition since 2012, despite a cease-fire deal brokered late last year between Russia and Turkey. Turkish officials have been urging Russia to stop providing support to the Assad regime, which has been carrying out a deadly assault in the northwestern region. Erdoğan has underlined that Turkey has no more patience regarding Assad’s flagrant human rights violations throughout Syria, including using terrorist groups as an excuse to carry out a campaign of ethnic cleansing.

Regime forces captured the key town of Maaret al-Numan from the opposition last Wednesday and have since set their sights on the town of Saraqib. The strategic M4 highway passes through the cities.

The September 2018 Sochi agreement signed with Russia prohibited acts of aggression in Idlib. The Syrian regime and its allies, however, have consistently broken the terms of the 2018 cease-fire and the new one that started Jan. 12, launching frequent attacks inside the safe zone in the northwestern province. More than 1,800 civilians have been killed in attacks by the regime and Russian forces since then.