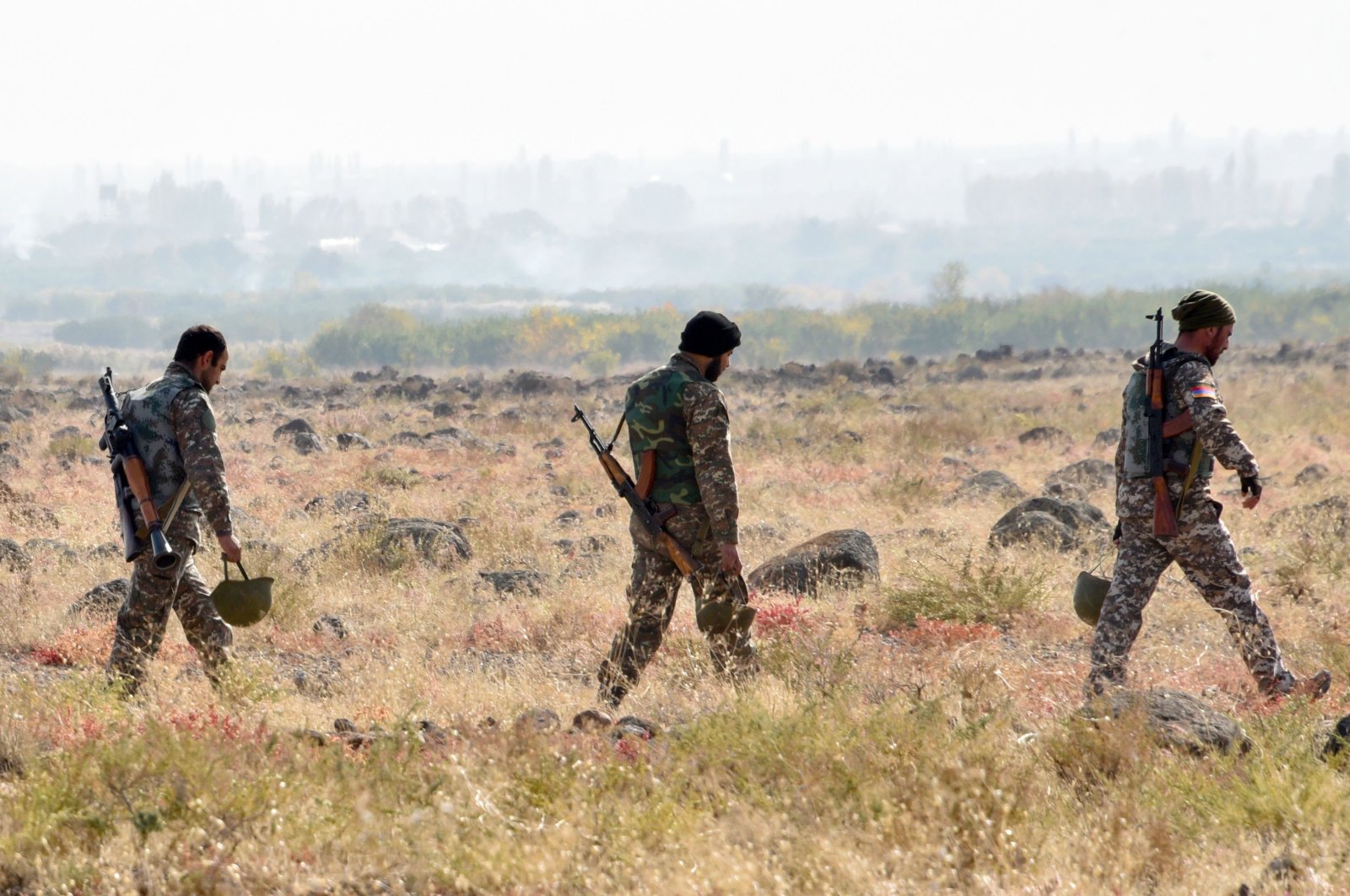 Reservists undergo a military training before leaving for the frontline in occupied Nagorno-Karabakh, at a range in Armavir region, Armenia, Oct. 27, 2020. (AFP Photo)
by French Press Agency - AFP
Oct 31, 2020 11:41 am

Russia said on Saturday it would provide "necessary" assistance to Yerevan in its conflict with Azerbaijan over the breakaway region of Nagorno-Karabakh if fighting reached Armenia's territory.

"Russia will render Yerevan all necessary assistance if clashes take place directly on the territory of Armenia," the Russian Foreign Ministry said, calling on the warring sides to immediately halt fire.

Pashinian sent the letter to Putin after Armenia and Azerbaijan failed to agree to a fresh cease-fire in the Nagorno-Karabakh conflict during talks in Geneva on Friday and as fighting continued overnight and Saturday morning.

The announcement, released by the Armenian Foreign Ministry, raised fears of an escalation in fighting between Armenia and Azerbaijan.

Armenia and Azerbaijan have been engaged in fierce fighting for more than a month over Nagorno-Karabakh, a region of Azerbaijan occupied by Armenia in the wake of the break-up of the Soviet Union.

The flare-up of the conflict has left more than a thousand dead, with world powers so far unable to persuade either side to stop fighting.

Russia has a military base in Armenia and has a defense treaty with Yerevan.

"The prime minister of Armenia has asked the Russian president to begin urgent consultations with the aim of determining the kind and amount of aid which the Russian Federation can provide Armenia to ensure its security," the Armenian Foreign Ministry said in a statement.

Russia has previously said that its defense pact with Armenia does not extend to the occupied region of Nagorno-Karabakh.

But Pashinian in his letter to Putin said that hostilities were getting closer to Armenia's borders and reiterated that Azerbaijan's ally Turkey was backing Baku, according to the statement.

He requested Moscow's help, invoking the two countries' close ties and a 1997 treaty on friendship, cooperation and mutual assistance.

Azerbaijan and Armenia have been locked in a bitter conflict over Karabakh since Armenian separatists backed by Yerevan occupied the mountainous province in a 1990s war that left 30,000 people dead.

The current clashes broke out on Sept. 27 and fighting has persisted despite the repeated international attempts to secure a cease-fire.

The warring sides have three times agreed to cease-fires during recent talks mediated by Russia, France and the United States but the truces have all quickly fallen apart.

More than 1,200 people from both sides have been reported dead since the fighting began, but the actual death toll is believed to be substantially higher.