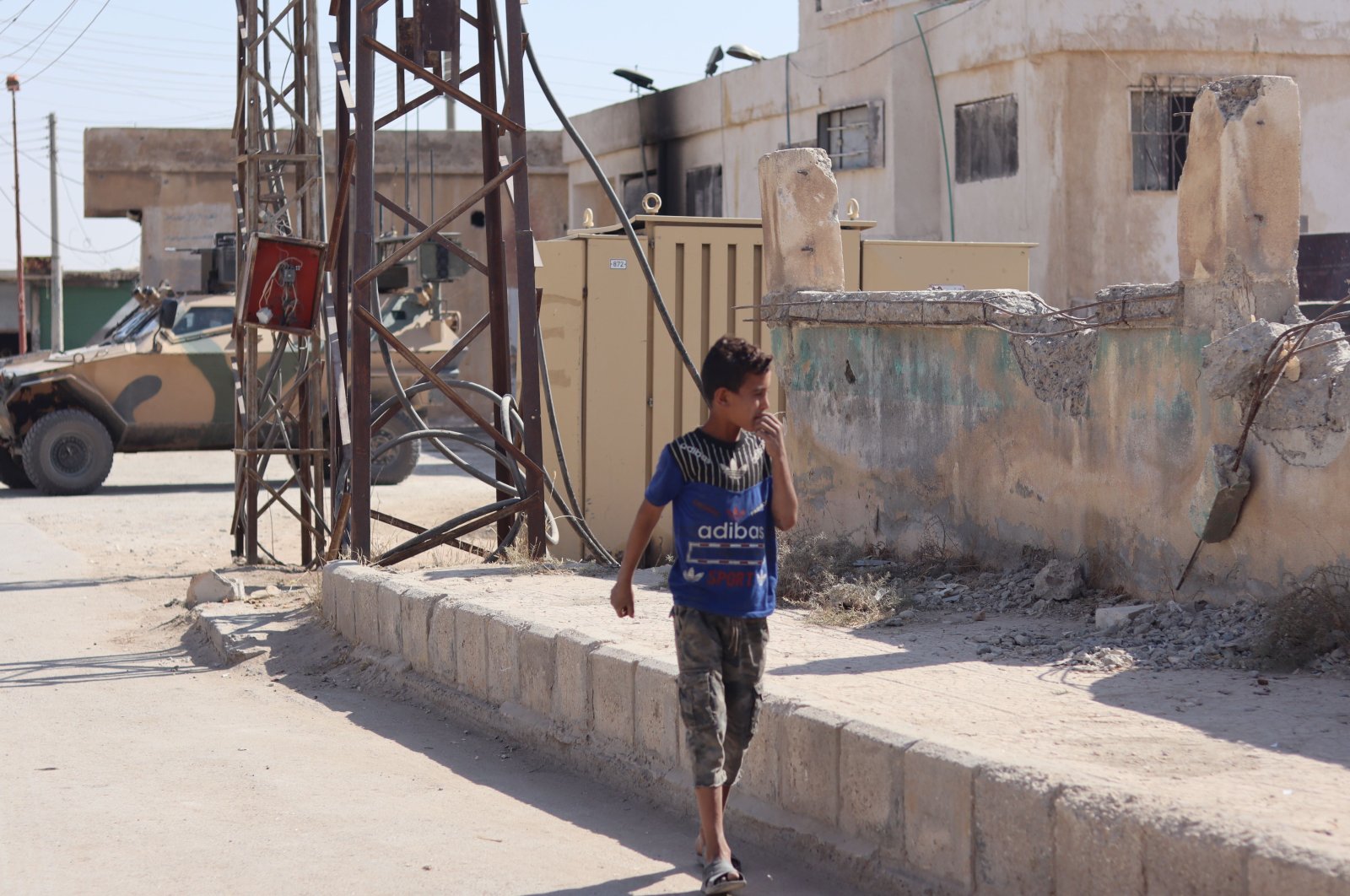 A Syrian boy walks along the streets of northern Tal Abyad where buildings have been damaged to a large extent by terrorist organizations, Oct. 11, 2020. (Dilara Aslan)
by Dilara Aslan Oct 12, 2020 10:53 am

One year has passed since the northern border town was liberated from terrorism, and Turkey continues to allocate lifesaving humanitarian aid and reestablish basic services

A series of conflicts have drastically shaped the lives of the residents of Syria’s northern town of Tal Abyad. However, on the first anniversary of Operation Peace Spring, which liberated the area from YPG/PKK terrorist control, the struggle to rebuild lives and eradicate the scars of war is ongoing.

"I want to become a doctor and heal the sick," said Fatima, a fifth-grade student at Ahmet Yasin primary school in Tal Abyad, when asked about her hopes for the future. Meanwhile, Fatima's schoolmate Sedil said: "I mostly appreciate the attention paid to hygiene and availability of water as well as the good education we receive," as life is gradually restored back to normal in their now terrorist-free town in northern Syria, a year after Turkey launched Operation Peace Spring on Oct. 9 in order to eliminate terrorists from northern Syria east of the Euphrates River.

The local school bells, silent for years, ring again as hundreds of children rush to classes. Some 267 schools have reopened their doors for 27,000 students, deprived of their right for education during previous years.

“Most of the children have started their education for the first time only recently,” a Turkish consultant at the school explained, saying that prior to that, for the last four years, classes were only taught in Kurdish, leading to Arab children not being able to go to school and participate. “We are giving them education in their own language,” he added.

Tal Abyad’s population is 95% Arab, therefore the main language of education is Arabic. Only 20% of students go to school in the city center, while the rest attend various institutions dotted around surrounding villages.

“When we came here, the school was not in a good enough state,” a soldier pointed out. “Even though the building’s primary function was as a school, it had been used by the YPG terrorist organization for various purposes,” the soldier stated, saying that tunnels were dug under the school by terrorists connecting parts of the town over various many kilometers. “We found guns, mines and IEDs (improvised explosive devices) in the schoolyard. Everything is cleared now. Classes have reopened,” he said.

The border town had a population of around 130,000 people prior to the beginning of the Syrian civil war in 2011. Following the occupation by the Daesh terrorist organization in 2014 and the YPG one year later, thousands fled either to other regions within Syria or seeking refuge in neighboring countries.

Yet since being liberated from terrorism by the Turkish Armed Forces (TSK) on Oct. 13, 2019, the town saw a surge in returnees, with 20,000 people more expected to come as infrastructure and life gradually returns to normal.

A total of 605 residential areas have been cleared of terrorism while 4,219 square kilometers (1,626 square miles) are under the control of Turkish forces and allied Syrian fighters.

Since the launch of the operation, Turkey has been supporting the return of every aspect of life in the region, from health to education, security to agriculture. In this respect, efforts to clear bombs and IEDs have been ongoing, while administrative control has been given to local councils.

Security forces have also neutralized 1,110 mines and 2,199 IEDs in the area of operations.

Within the scope of reconstruction efforts, Ankara has rolled up its sleeves to repair hospitals, schools, mosques and roads destroyed by the YPG/PKK. In order to ameliorate the region's social infrastructure, people were given food and clothing with the help of several nongovernmental organizations (NGOs), while roads and buildings were rebuilt.

Another vital field where Turkey is giving consultative support is the health sector. While the people of Tal Abyad could not find a place for treatment or had to be sent to Turkey even for the smallest problems, locals are now enjoying their own central hospital with many smaller policlinics also opened. According to the hospital’s chief physician, around 1,000 people are treated here daily.

Entering the hospital, the scars of war still draw one’s attention. The chief physician, a Turkish consultant, explained that the YPG/PKK had destroyed the hospital’s heating system, rendering it inoperable. A new system was in the progress of being installed, he said.

According to the chief physician, large parts of the hospital had been burned down. The Turkish government carried out reconstruction efforts and reopened many wings. A COVID-19 ward was also established for potential cases. “Fortunately, we have not encountered any positive cases yet,” the chief physician said.

“The infrastructure of the hospital was rendered unusable by the terrorists,” one of the doctors similarly pointed out: “But now it is operational, and people do not have to be sent to Turkey for treatment as often as before.”

It was stressed that the hospital still had the option to send patients across the border to Turkey if needed. “When the capacities of the hospital seem to be insufficient, health personnel can easily contact Turkey and request assistance or transfer patients for treatment,” the chief physician said.

All health personnel consist of locals, he continued, pointing out that around 25 Turkish personnel were also on stand-by support and consultative works.

“We are working on the assumption we will one day have left,” the chief physician said.

Although the people now have access to basic services, including health and education, while receiving regular humanitarian aid from Turkey, the town has a long way to go and is in need of further support.

The Turkish Red Crescent (Kızılay) also opened up a clothes shop in the town where clothes are not sold but rather given to those that are in need.

A Kızılay official explained that once families are deemed in need, they are invited to the shop and may choose their own clothes as if they were shopping in the aisles of a regular clothing shop. The shop, which was opened this year, has so far offered clothing aid to 2,523 families and over 20,000 people. More than 90,000 pieces of clothing and shoes have been gifted to locals.

“The charities and NGOs working here are Turkish. Turkey has helped us for 10 years,” the head of the Tal Abyad local council Wail Hamdo stated. “Why do international organizations and NGOs not work here?” Hamdo asked, saying he spoke for all residents in inviting more groups to help the town recover.

Hamdo stressed that the whole administration in the town was Syrian. “The locals manage this area, our Turkish friends do not interfere in local affairs. We just receive consultation and the civilian police consist of local people maintaining security here,” he added.

Security has been largely established over the area; however, the threat of terror persists. YPG/PKK terrorists continue to attack the towns of Tal Abyad and nearby Ras al-Ain despite pulling out of areas under a deal reached by Turkey and the U.S. on Oct. 17.

As part of the operation, a deal was also struck with Russia, in which Moscow was set to drive YPG/PKK elements from the area. “All YPG elements and their weapons will be removed from Manbij and Tal Rifaat,” the agreement said in the sixth article, while the seventh article added: “Both sides will take necessary measures to prevent infiltrations of terrorist elements.”

Yet, reportedly the YPG presence in the region remains as it was prior to the agreement, giving them a base from which to attack civilian settlements.

“The scars of terrorism are ever-present,” Hamdo said. “People are still afraid of suicide bombs and attacks yet security has improved to a large extent. While people could not go out during the times of terrorist rule, now they feel free.”

Indeed, the streets are full, and people have reopened shops. Walking down the street of the town’s bazaar, one can see shoe shops, coiffeurs, kebab restaurants and traders selling legumes and vegetables. Most are small businesses and the owners of the shop complain about the economic situation.

Some say they work partly in Tal Abyad and partly in nearby Şanlıurfa, across the border in Turkey. The worry of making ends meet is reflected in people’s faces, but rebuilding efforts are ongoing at full pace.