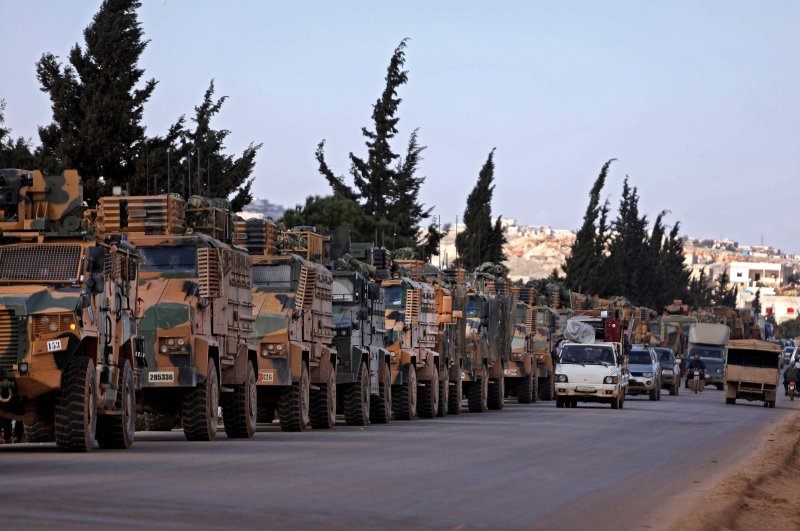 A Turkish military convoy is seen parked near the town of Batabu on the highway linking Idlib to the Syrian Bab al-Hawa border crossing with Turkey, March 2, 2020. (AFP)
by Anadolu Agency Mar 03, 2020 2:04 am

Ankara has intensified its negotiations with both regional and international actors to find a diplomatic solution to the Idlib crisis. However, Assad regime violence continues to hamper the efforts, compelling the Turkish military to pursue ground actions in the region

Turkey rolled up its sleeves to come up with a diplomatic solution to the Syrian crisis, enhancing negotiations with regional and international actors, particularly Russia, in a hope to put an end to the escalating tensions. However, developments in the field overshadow diplomatic efforts as the conflict between the Turkish military and the Syrian regime continues nonstop, with the latter resuming its attacks on civilians in the northwestern province of Idlib.
A total of 2,557 Syrian regime elements have so far been neutralized as part of Turkey’s ongoing Operation Peace Shield, Defense Minister Hulusi Akar said Monday.
On the details of the operation, Akar said the operation has been continuing successfully as planned and that the country had destroyed two jets, two drones, eight helicopters, 135 tanks and five air-defense systems belonging to the Syrian regime. Akar, along with Chief of General Staff Gen. Yaşar Güler, Land Forces Commander Gen. Ümit Dündar and Air Forces Commander Gen. Hasan Küçükakyüz, was present at the tactical command center in southern Hatay province, bordering Syria, where he pointed out that as a guarantor country, Turkey would fulfill all responsibilities arising from its international commitments. “Our expectation from Russia at this point is to fulfill its commitments as a guarantor state, and in this context, to use its influence over the regime to make it halt its attacks and withdraw to the lines set under the Sochi agreement,” the minister underlined.
Akar said talks between Ankara and Moscow were underway, adding that Turkey was not aiming for a face-off with Russia and that its only goal was to stop regime massacres and prevent radicalization and migration.

Turkey on Sunday launched Operation Spring Shield after at least 34 Turkish soldiers were killed and dozens injured in an Assad regime airstrike in Idlib, a de-escalation zone in northwestern Syria, just across Turkey’s southern border. Turkey’s only target during the operation were Assad regime troops and equipment in Idlib under the nation’s right to self-defense, stressed Akar.

But more than 1,300 civilians have since been killed in attacks by Assad regime and Russian forces in the zone, as the cease-fire continues to be violated, sending about a million refugees toward Turkey’s border with Syria.

The SNA, an alliance of moderate opposition groups backed by Turkey, has so far re- gained control of over 12 villages in the Idlib de-escalation zone.

Jabal Zawiya is located in a strategic position as it leads to the M4 highway which connects Aleppo and Latakia.

Saraqib is on a strategic crossroad connecting the country’s two main highways, M4 and M5. The M4 motorway connects the port city of Latakia to the Iraqi border, while the M5 forms the backbone of the country’s highways, connecting the economic hub of Aleppo to the central cities of Hama and Homs, the capital Damascus and to the Jordanian border further south.

While the operation against the regime forces was continuing, a statement came from Russia, stating that the war is an unwanted outcome.

Russian President Vladimir Putin has said Russia does not plan to go to war with anyone but wants to dissuade other countries from engaging in conflict with Moscow, Tass news agency reported Monday.

Putin made the comments in a Tass interview in which the Russian news agency began releasing parts of in installments on Feb. 20. yesterday’s comments were included in the sixth such installment.

Yet, while Putin was angling moderate rhetoric toward Turkey, other statements from the country were more aggressive.

The head of the Russian military’s Reconciliation Center in Syria said Sunday that Russia can no longer guarantee the safety of Turkish aircraft flying in Syrian airspace.

In a statement released late Sunday Rear Adm. Oleg Zhuravlev said that “in view of the sharp exacerbation of tensions in the air space over Idlib” the Syrian regime was “forced to declare it closed.” “In this situation, the Russian troops’ command can’t guarantee security of flights of Turkish aircraft in the skies over Syria,” Zhuravlev said.

Earlier Sunday, the Assad regime said northwestern airspace was closed and any aircraft or drone that entered “will be treated as hostile and shot down.”

Considering that President Recep Tayyip Erdoğan is expected to have a meeting with Putin on March 5 in Moscow, the conflicting remarks of Russia raise the question of whether or not the dialogue between the two leaders will be sufficient to establish a solution for the crisis.

During two leader’s presidency, the ties between the countries have reached a new momentum having diverse cooperation in various fields. Erdoğan visited Moscow for the first time immediately after the victory of the Justice and Development Party (AK Party) in the general parliamentary elections in Turkey on Dec. 23-24, 2002.

President Putin also visited Ankara on Dec. 5-6, 2004. This was the first official visit by a leader of Russia (as the successor of the USSR) in more than three decades.

It was then that the leaders of the two states indicated their desire and political will to overcome the existence of years of negative stereotypes regarding each other and the restraining burden of historical memory of the numerous Russian-Turkish wars.

Still, the developments in war-torn Syria have led the two countries down different paths: one is known for backing regime head Bashar Assad, while the other has been the supporter of the opposition forces since the beginning of the war nine years ago.

Apart from talks with Russia, Turkey has also attracted attention from various Western countries amid recent tensions. Bulgarian Prime Minister Boyko Borisov was in Turkey yesterday to hold talks with Erdoğan over the shift in Turkey’s refugee policy. Another visit came from an American delegation accompanied by Kelly Craft, the U.S. ambassador to the U.N., and James Jeffrey, the U.S. special envoy for Syria and former U.S. ambassador to Turkey.

According to a media statement released by the U.S. mission to the U.N., the two came to Turkey “amid growing alarm over escalating violence in Syria.”

“Assad-regime forces, backed by Russia and Iran, have unleashed a brutal military campaign in Idlib, killing hundreds of civilians and forcing nearly a million people to flee, constituting the largest number of displaced people since the Syrian war began nine years ago,” the statement read.

During her visit, Craft was expected to stress the “urgent need of U.N.-authorized cross-border access for the delivery of critical humanitarian assistance to Syrian communities and the displaced struggling without sup- plies and proper shelter in freezing temperatures.”

The U.S. delegation was also expected to meet with representatives of the U.N. and non-governmental organizations, who are working to respond to the growing humanitarian crisis.

In a statement Monday, the ministry said Raab will hold talks with Turkey’s Foreign Minister Mevlüt Çavuşoğlu during the visit.

The duo will discuss bilateral issues following the Jan. 31 Brexit. The talks will also cover current regional and international issues, including Syria.

Meanwhile, France on Monday condemned the attacks on Turkish soldiers by the Assad regime and its allies. According to a statement by the French Foreign Ministry, French top diplomat Jean-Yves Le Drian spoke over the phone with his Greek counterpart Nikos Dendias and EU foreign policy chief Josep Borrell.

Le Drian “recalled the appeal by 14 foreign ministers from European Union member countries for the immediate cessation of the hostilities by the Syrian regime and its allies in Idlib,” said the statement. He also “reiterated in the strongest terms his condemnation of this offensive by the Syrian regime and its – particularly Russian – supporters, and of the attacks on Turkish forces in the area,” it added.