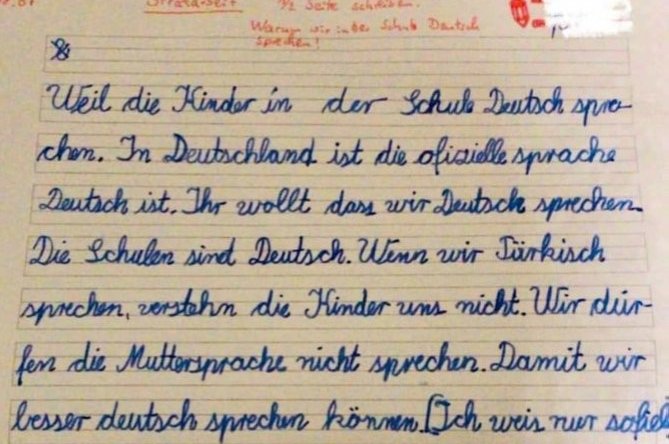 A Turkish student in Germany was punished by his teacher for speaking Turkish during the break time.

At a school located near the city of Heidelberg in the state of Baden-Wurttemberg in Germany, the 9-year-old student spoke Turkish with friends during the break. After seeing him speak Turkish, the teacher warned the student to speak and write German and asked him to answer the question "Why do we speak German at school?" on a piece of paper as punishment.

"Because children speak German at school. The official language in Germany is German. You want us to speak German. Schools are German. If we speak Turkish, children do not understand us. We should not speak in the mother tongue. For better speaking German. That’s all I know,” the student wrote.

The students’ parents took legal action against the teacher. The family’s lawyer, Yalçın Tekinoğlu, said: "Children cannot be banned from speaking Turkish with each other outside of class hours. For a punishment, there should be a ban determined from beforehand. This punishment is a violation of the law.”