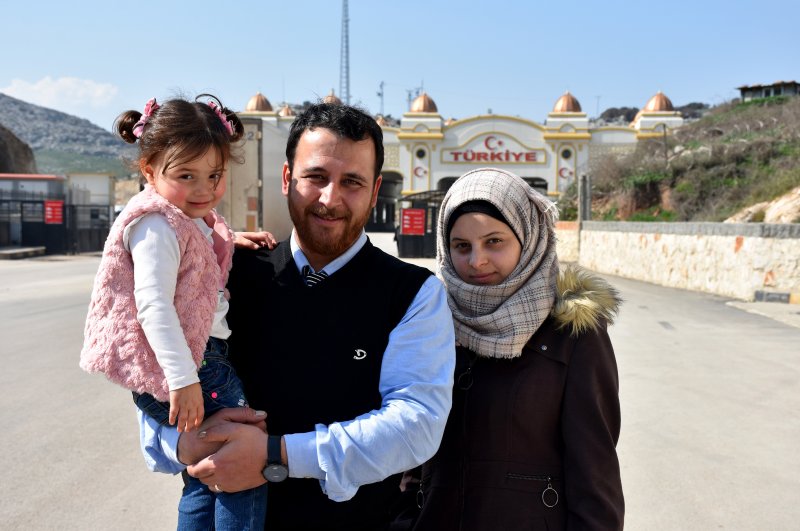 A Syrian girl, who became famous for heaving with laughter in the face of bombings by the Syrian regime in the war-torn country's northwestern province of Idlib, was brought to Turkey on Tuesday to give her a safe and secure childhood.

Three-year-old Salwa’s video with her father, who taught her to see the bombing sound as a game to cope with the constant fire, circulated across social media last week, giving her instant fame while showing the brutal face of the war through the eyes of an innocent child.

On Tuesday, Salwa and her father Abdullah Mohamad arrived in Turkey’s southeastern province of Hatay to start a new life where real childhood games can be played.

Speaking to Anadolu Agency, Mohamad expressed their happiness, saying that he and his daughter had tried to send a message to the international community through the video. The father also expressed his gratitude to both the Turkish public and government as supporters of the Syrian people since the beginning of the nine-year war.

“Now, my daughter will be able to go to school. I hope that soon the conflict in Syria can end, and I’m able to return,” he added.

The video shows how, as the sound of bombing began to be heard, the girl's father asks, “Is it a jet or a bomb?”

Salwa responds: “A bomb. When it comes, we will laugh!” The blast is heard, followed by the laughter of the little girl.

It has been months since regime forces escalated attacks on Idlib, the last opposition stronghold in the war-torn country, targeting innocent civilians under the pretext of fighting terrorists. However, the regime is not alone in its attacks, which have been ongoing since April 2019. Russia is often active on the ground as a backer of the regime, further aggravating the humanitarian crisis.

According to a U.N. statement last week, nearly 900,000 people have fled the region due to the regime offensive on Idlib. This marked the biggest movement of migrants in the nine-year-old conflict.