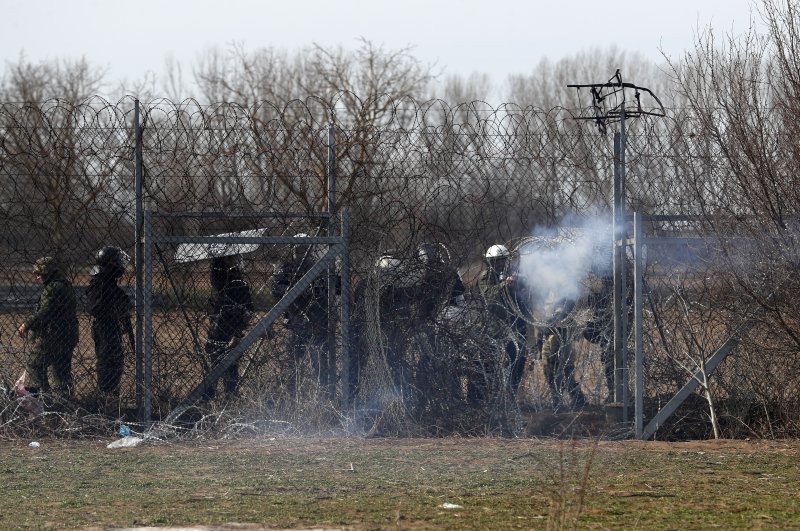 Greek police fires tear gas at migrants who trying to enter Greece during clashes at the Turkish-Greek border near the Pazarkule border gate in Edirne, March 2, 2020. (AP)
by DAILY SABAH Mar 02, 2020 12:37 pm
RECOMMENDED

A Syrian refugee was killed by the Greek border police on Monday while trying to move to Greece following Turkey’s policy change opening border crossings to Europe.

Ahmed Abu Emad, a Syrian refugee from Aleppo, was shot in his throat by Greek guards and died of his injury early in the morning. One of the hundreds of thousands of refugees trying to cross the border with the hope of starting a new life, Emad’s body has been brought back to Turkey.

1 Syrian refugee shot dead by Greek border guards while thousands of others continue to face violence at border crossingshttps://t.co/QxGe4Ah1KD pic.twitter.com/1mZ1DaRlWt

Thousands of migrants have been forced to sleep in the open, some since Friday, exposed to the elements and in temperatures close to freezing in the border province of Edirne in northwestern Turkey.

Some have traveled by train, others by bus or taxi, all hoping that President Recep Tayyip Erdoğan's warning to Europe will mean they can eventually get to countries like Germany or Italy.

Dozens have attempted to cross the Maritsa River to Greece while others described mistreatment by Greek authorities.

As a “measure” against the crossings, Greece border police use tear gas and stun grenades. Apart from the tear gas and grenades, the police also arrested dozens of refugees for attempting to enter the country. According to Greek officials, they arrested 66 migrants Friday, 17 of whom were sentenced to 3.5 years in jail for entering the country illegally. Those sentenced were all Afghans and were the first migrants sentenced for illegal entry since 2014. On Saturday, Greece arrested another 70 people who tried to cross the land border illegally.