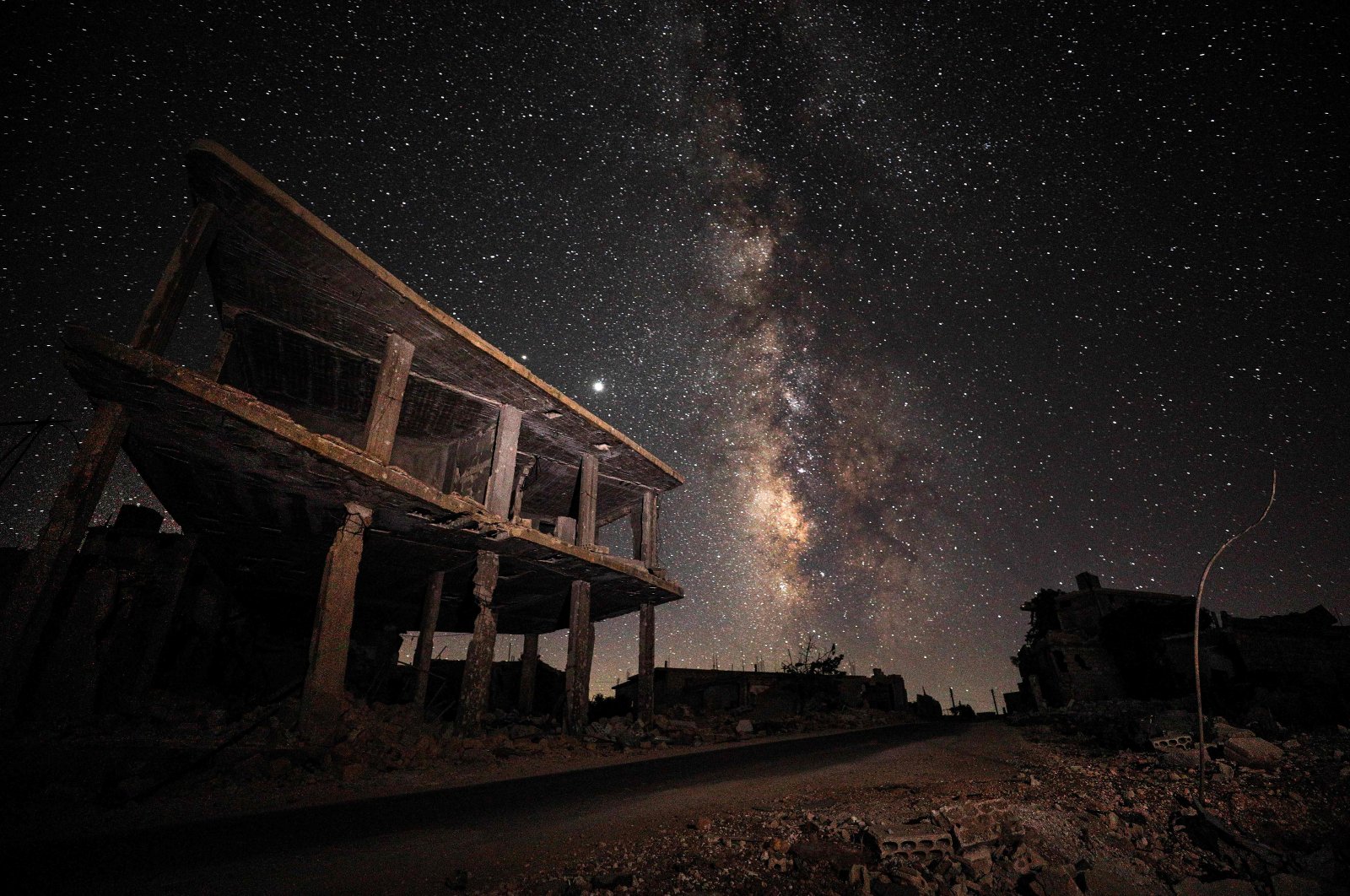 This long-exposure picture shows a view of the Milky Way galaxy rising in the sky above destroyed buildings in the village of Balyun in the opposition-held southern countryside of Syria's northwestern province of Idlib, near the frontline with government forces, July 21, 2020. (AFP Photo)
by Dilara Aslan Jul 26, 2020 1:55 pm
Edited By Dilara Aslan

Suppressed by the Bashar Assad regime for years, the Syrian Turkmen Assembly raises its voice for a more democratic, just and free Syria, underlining cooperation with Turkey in restoring the territorial integrity and stability of the war-ridden country

Syrian Turkmens, the country's second-largest ethnic group after the Arabs, have been subject to the Bashar Assad regime’s assimilation policy for years, the Syrian Turkmen Assembly said.

They pointed out that the Turkmen community seeks the reestablishment of Syria’s territorial integrity, the institution of constitutional rights and legal status.

"The Turkmen, who have long been perceived as a threat by the Syrian regime, were torn away from their language and culture to prevent the emergence of their national consciousness. The Turkmen were given no voice in political terms as well," said Fatma Özcan, media coordinator for the Syrian Turkmen Assembly told Daily Sabah. She added that with the 2011 uprisings, which evolved into the Syrian civil war, the Baath regime mounted pressure on the Turkmens. They were targeted by the Bashar Assad regime after 2011, being killed, tortured and forced to migrate, for joining the opposition camp in the civil war.

Özcan said it would be unfair to claim that the group's political consciousness is solely driven by its efforts to reclaim the homeland. "The desire to secure an identity comes forth. A reactionary and cultural nationalism has emerged among the Turkmen after 2011," she said.

The regime has survived nine years of conflict yet is still far from being a proponent of a solution that would end all hostilities. It has blocked several negotiation attempts of a constitutional committee and a U.N.-brokered process to find a political solution.

For years, the Bashar Assad regime has ignored the needs and safety of the Syrian people, only eyeing further gains of territory and crushing the opposition. With this aim, the regime has for years bombed vital facilities like schools, hospitals and residential areas, causing the displacement of almost half of the country’s population.

"Syrian Turkmens will play an essential role in the country's political future," Özcan highlighted, saying the Syrian Turkmen Assembly is the only organization following a democratic method within the opposition and shouldering a unifying role in the fight for freedom.

Accordingly, the assembly aims to protect the rights of the Syrian Turkmen under the constitution, as well as create a democratic and civilian political structure.

"By gathering all Turkmen groups under a single roof and being their sole representative, the assembly has become an important actor in Syria," Özcan said.

Syria's Turkmen community and Ankara have deep-rooted cultural and historical ties and have been in cooperation in the normalization of the country. Turkey is supporting the Turkmens to gain the position they deserve, as one of the main components of future Syria.

Underlining that Syria’s future is an important factor for the entire Middle East and especially Turkey, Özcan said: “Turkmen presence in the region is vital for the security of Turkey’s southern borders. They become more significant considering the terrorist organization’s hostility toward Ankara's presence in northern Syria and the fact that the regional and global powers’ policies toward Syria contradict with those of Turkey."

The assembly once again reiterated their support for Turkey's operations into northern Syria to create a buffer zone against the PKK terrorist organization’s Syrian wing, the YPG, ensuring the security of local civilians and protecting Turkish borders.

She pointed to Turkey's view that Arabs, Turkmens and other ethnic identities can be resettled into the areas liberated from terrorists in Syria, without harming the demographic structure, and added that Ankara sees a future role for the Turkmen Assembly in unifying all Syrian ethnic groups.

Assad's Baath Party came first in the parliamentary elections last week, claiming 177 seats out of 250, in the third such elections since the start of the war nine years ago. Voter turnout stood at 33%, down from 57% in 2016.

The election came as the regime had regained some territories lost at the beginning of the country's war, but faces its hardest economic challenges yet amid the coronavirus pandemic.

More than 7,000 polling stations opened across regime-held parts of Syria, including for the first time in former opposition strongholds. However, the millions of Syrians who fled the conflict were not eligible to vote.

The assembly underlined that "the elections without the people" were taken in an atmosphere where half of Syria’s population was forced to migrate.

Saying that elections in Syria take place under the shadow of the oppressive regime, the coordinator elaborated that no free, democratic and just elections were held since the Baath regime took power.

"The Syrian people had no real choice in the so-called elections. As a result, it is not possible to view this election, which is far from democracy, as legitimate or acceptable," Özcan continued, "Damascus, which controls around 61% of the Syrian territory, has carried out elections also in some parts of the YPG/PKK-occupied Hasakah. Though it is claimed that 250 members of different backgrounds took place in the elections, many businessmen and tribe leaders, known for their close ties to the regime were elected.

She further elaborated that it is known the regime determines the candidates, including the independent ones.

"The Assad regime has incorporated the pro-regime militia, commonly known as shabiha, in the elections. The Shabiha have been involved in myriad war crimes including forceful detention, mass killings, extrajudicial executions, which have been also registered in U.N. reports," the coordinator added, underlining that these militia forces entering the parliament is unacceptable while it signals the political influence Iran has imposed on Syria.

Syrians on verge of famine

Besides facing daily oppression by the regime, the Syrian people have also been suffering from malnutrition. The U.N. World Food Programme (WFP) warned in June that Syria is facing an unprecedented hunger crisis, reporting 9.3 million civilians lacking adequate food in the civil war-stricken country. Syria's war has devastated the country's economy since 2011, plunging 80% of its people into poverty, according to the United Nations. Despite relative quiet in the country's remaining battlefields, early 2020 has only seen the situation worsen.

"The people, besides the heavy burden of yearslong war, are also crushed under hard living conditions caused by inflation and a record decline in the value of the Syrian pound. To compare, while the wage of a civil servant is 48,000 Syrian pounds ($93.57), the price of 1 kilogram of dessert is 40,000 Syrian pounds," she added.

In regime-held areas, prices go up several times a day, forcing many shops to close, unable to keep up with the chaos. The national currency, the Syrian pound, has tumbled in recent weeks, reaching a record low to the dollar. The pound, which traded at 47 pounds to the dollar before the 2011 uprising, plunged to over 3,000 to the dollar last month before it made some gains in later days.