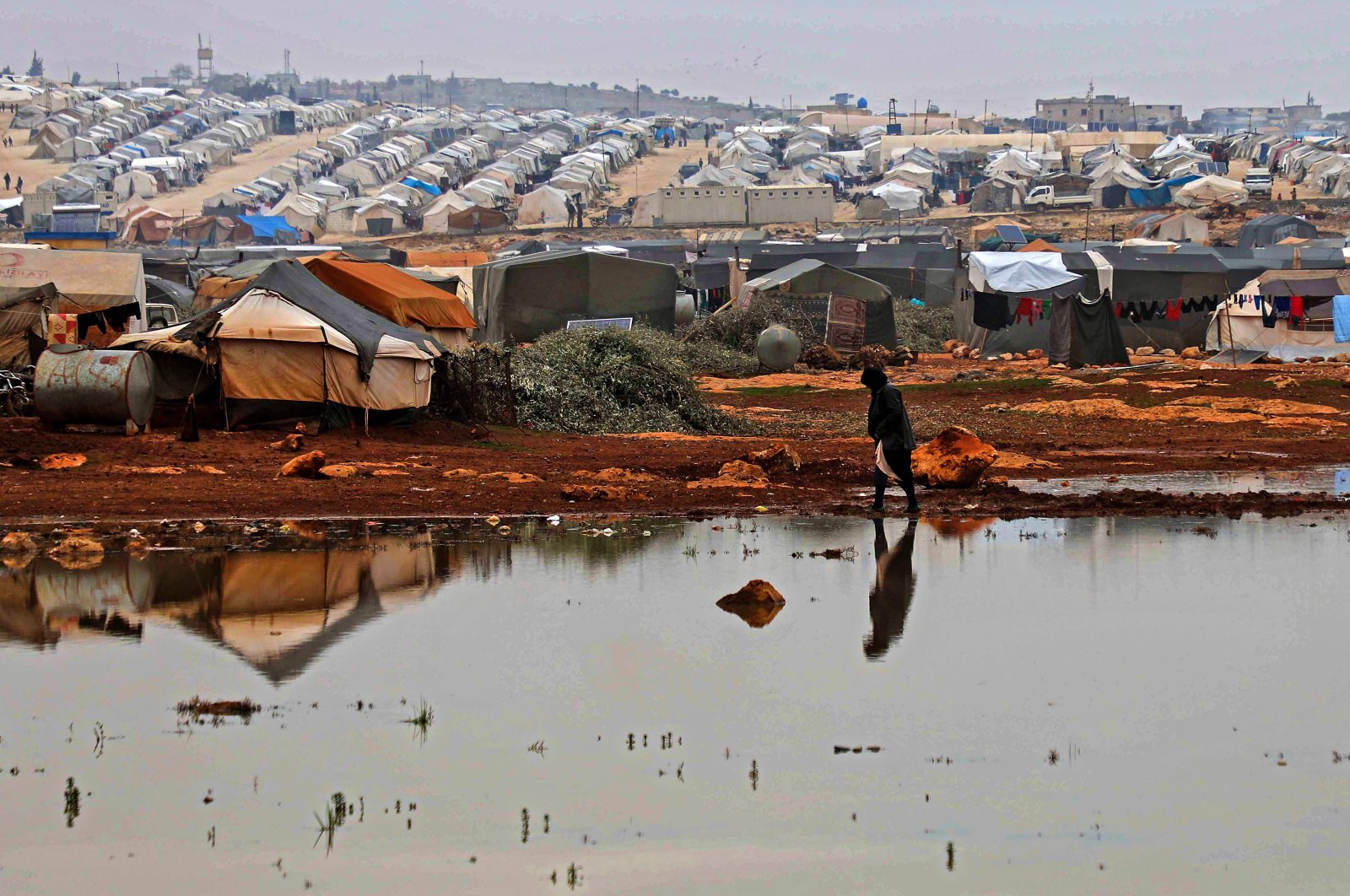 A Syrian woman walks on a flooded patch at a camp for displaced Syrians near the town of Kafr Lusin by the border with Turkey, in Syria's opposition-held northwestern province of Idlib, Dec. 15, 2020. (AFP Photo)
by DAILY SABAH Jan 06, 2021 1:15 pm

Living in makeshift tent camps in squalid conditions after fleeing terrorism and oppression, Syrians continue to struggle to survive, calling on aid groups and Turkey to provide durable briquette houses for shelter through the winter

Hundreds of thousands of Syrians that have fled the country due to the attacks and oppression of the Bashar Assad regime now hope for more adequate housing near the Turkish border in northern Syria.

Nora Kaoud, who fled Hama’s al-Hamra village and sought refuge at the Abu al-Feda camp near Turkey’s border, told Anadolu Agency (AA) that the tents they currently live in will not protect against the harsh winter.

Kaoud, who lost three children during the Assad regime's attacks, called on humanitarian groups, saying: “Rescue us from this suffering, tents and mud. Transfer us to briquette houses.”

Stating that many families at the tent camps lack enough food, she said that only those with the means to buy food can purchase it from sellers when they come.

“Our lives will change greatly when we move to briquette houses. We would have a home, we would be protected from the cold and leave behind these sufferings," she said.

Underlining that the situation is only worsened when it rains, Kaoud shared that it becomes impossible to even walk as the water turns the area into a swamp.

Frou Abu al-Jasim, another resident, said 260 families live in the camp. “During downpours of rain, no one can go to the hospital due to the mud, while vehicles also cannot enter to transfer the elderly and children. We ask NGOs and Turkish authorities to turn these families’ tents into briquette houses.”

Syrian civilians who are displaced and living in overcrowded makeshift tent camps struggle with heavy rain and floods while awaiting food, clothing and firewood. Tents that are unsuitable for winter conditions often catch fire while civilians try to warm themselves or get flooded with mud due to the region’s strong winds and rains.

Currently, Turkey's Disaster and Emergency Management Authority (AFAD) coordinates four camps in the Idlib region. It is also overseeing the construction of 50,000 briquette houses that are expected to be completed soon.

Idlib, the last opposition bastion, has been battered by repeated military offensives from the Assad regime and is home to nearly 4 million people, most of them displaced and living in tent camps or unfinished buildings.

Apart from regime oppression, Syrians are also frequently the target of terrorist organizations.

Two children were killed Monday by a mine planted by the PKK terrorist organization’s Syrian wing, the YPG, after they infiltrated into the Operation Peace Spring area, detonating the mine remotely.

The incident caused the deaths of 10-year-old Wasiq and 14-year-old Mohammed, leaving the father Mahmoud al-Sheikh childless. According to security sources speaking to AA, the terrorists had planted the explosives on a road frequented by civilians going to their fields.

The mine detonated as the family was on their way to irrigate their fields in their truck. The driver was saved thanks to Turkish soldiers in the area but the two children, unfortunately, died of their injuries, sources said.

Following 100 meters (328 feet) behind the truck on a motorcycle at the time of the incident, the father said he did not understand what was happening at the moment.

“I lost both of my children. I remember everything about them. They were part of me. Yesterday I could not sleep, my heart was on fire,” the father told Anadolu Agency (AA) at the graves of his children.

“We had no weapons, nor were we going to war; we were just trying to make our living. We wanted to irrigate our fields,” he said.